It's been a long, long time since Marvel Legends collectors have seen a new, highly-articulated and highly-detailed version of everybody's favorite web-slinger in his classic red and blue duds.  Technically, this is a movie version, but I think a lot of collectors will be putting him in with their comic figure displays.  Check him out after the jump. 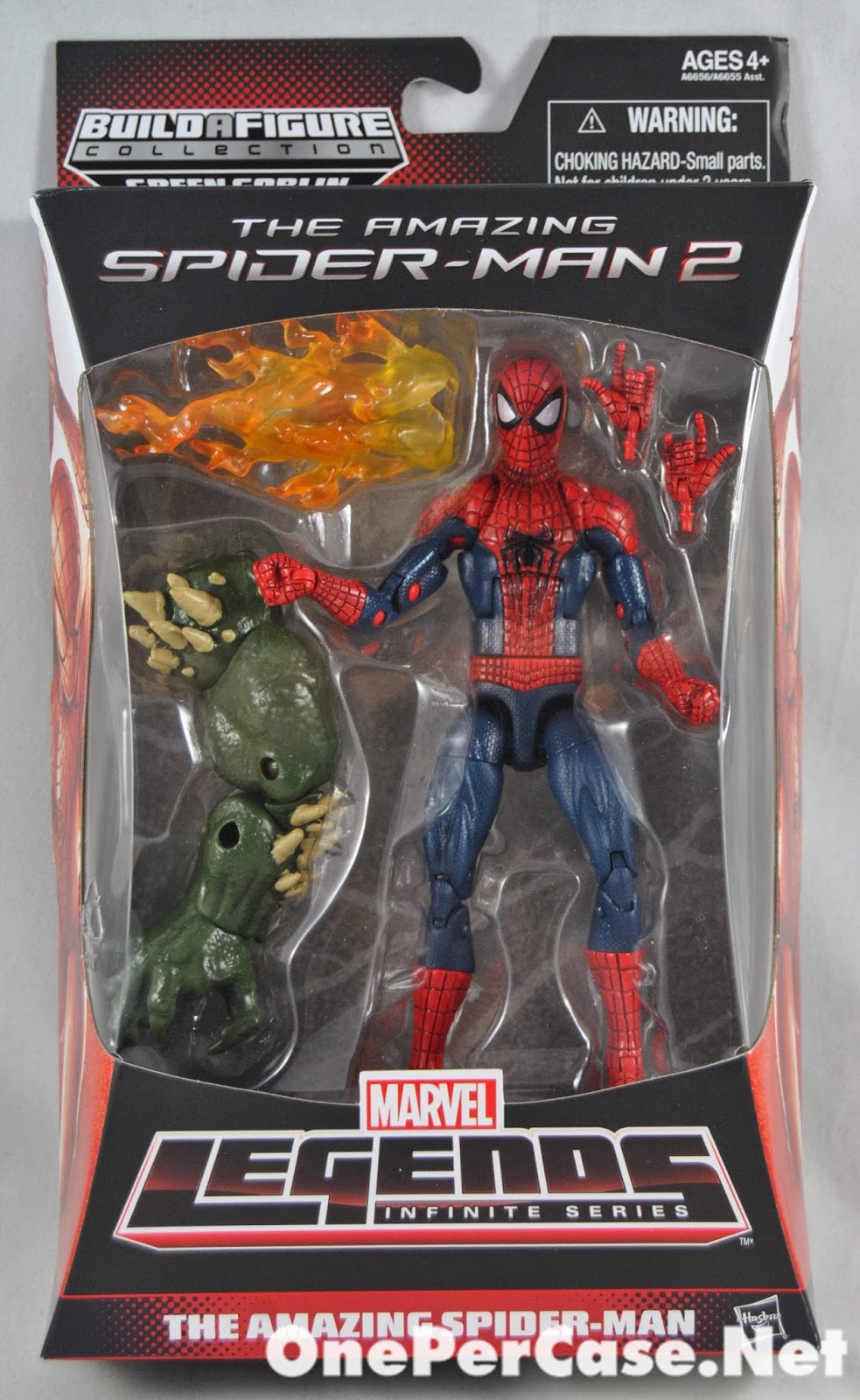 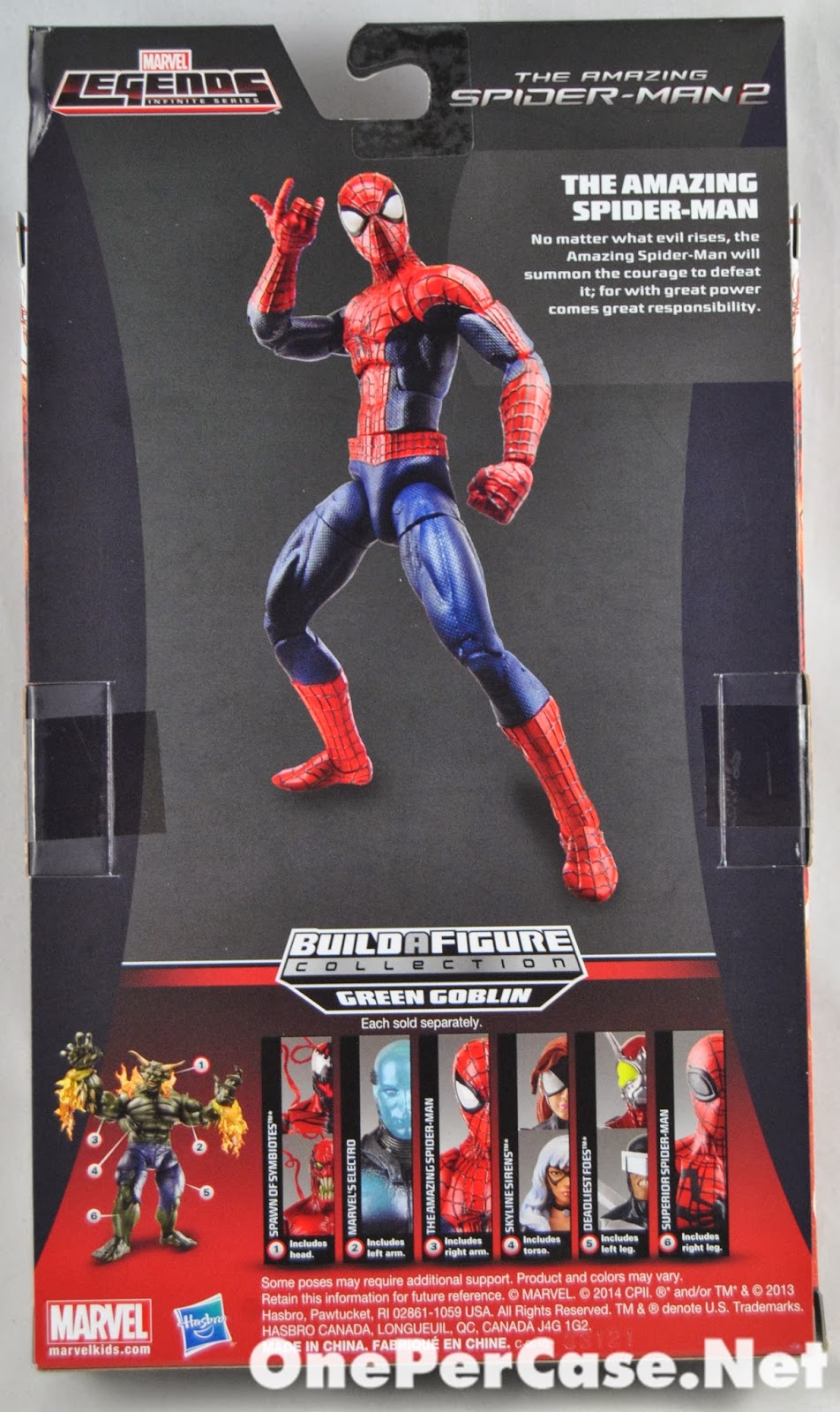 Like the rest of the Amazing Spider-Man Infinite series, Spidey comes in a predominately red and black window box.  We've seen this several times now, so I won't dwell on it, but I love this new packaging. 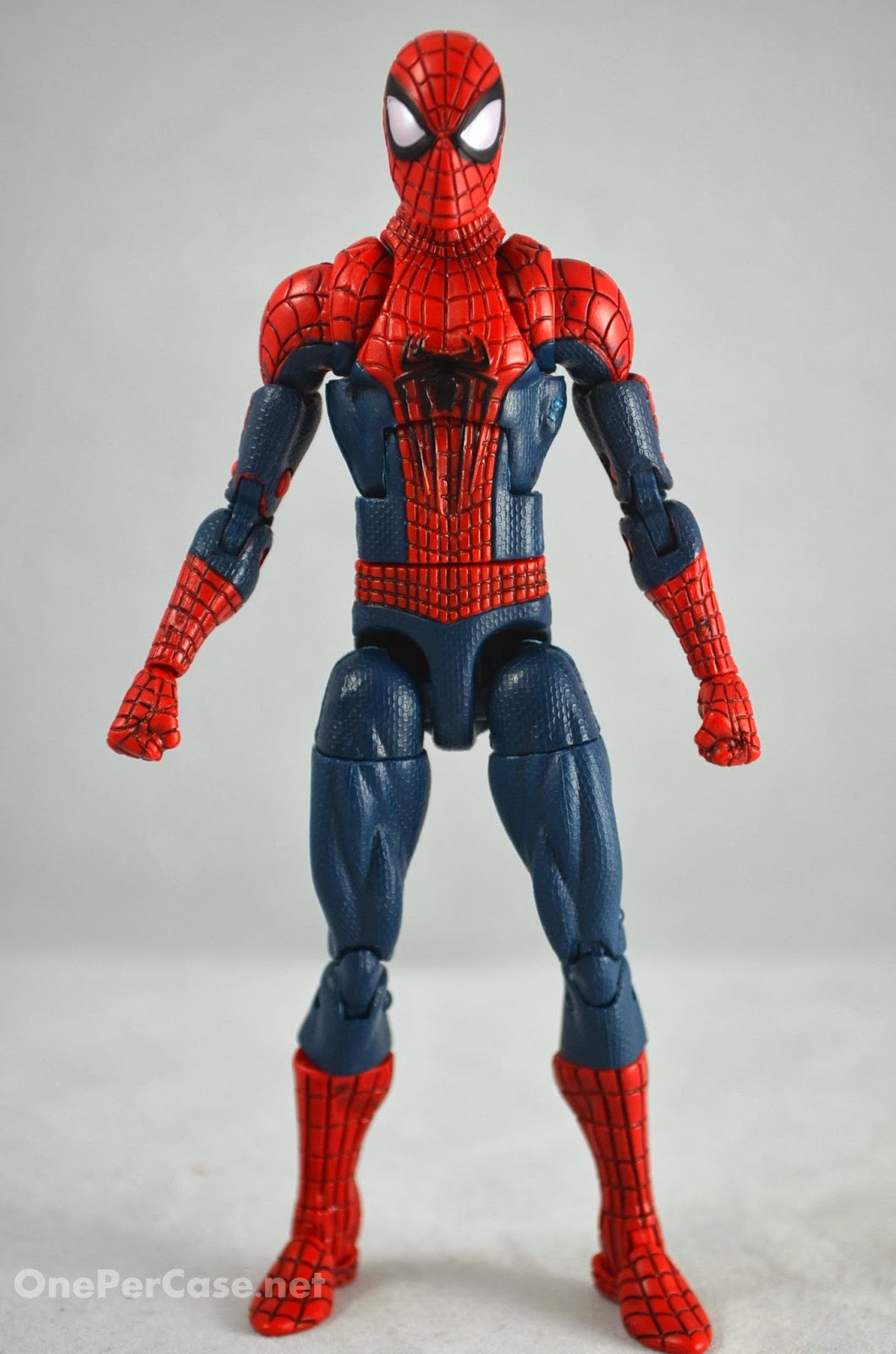 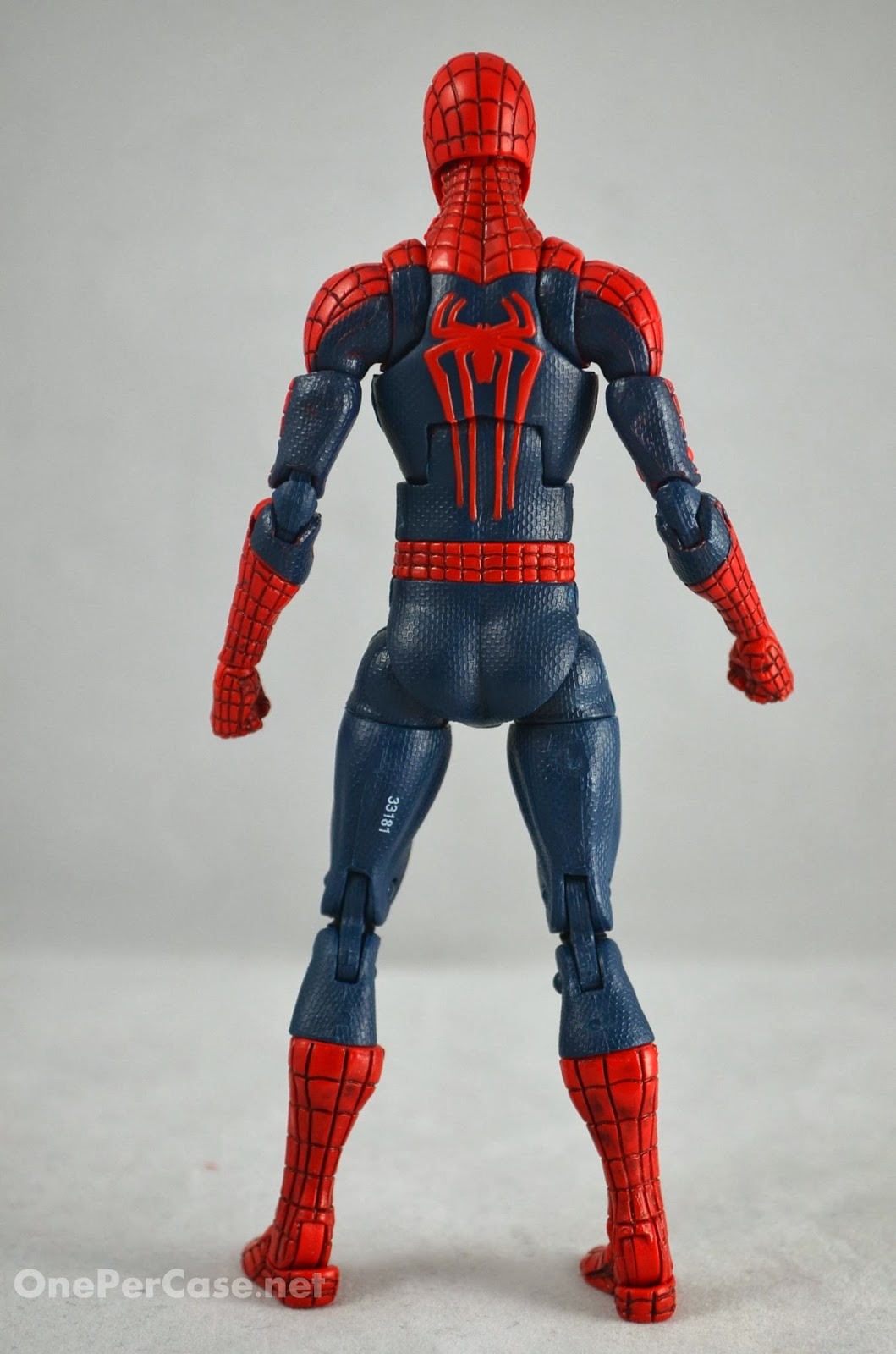 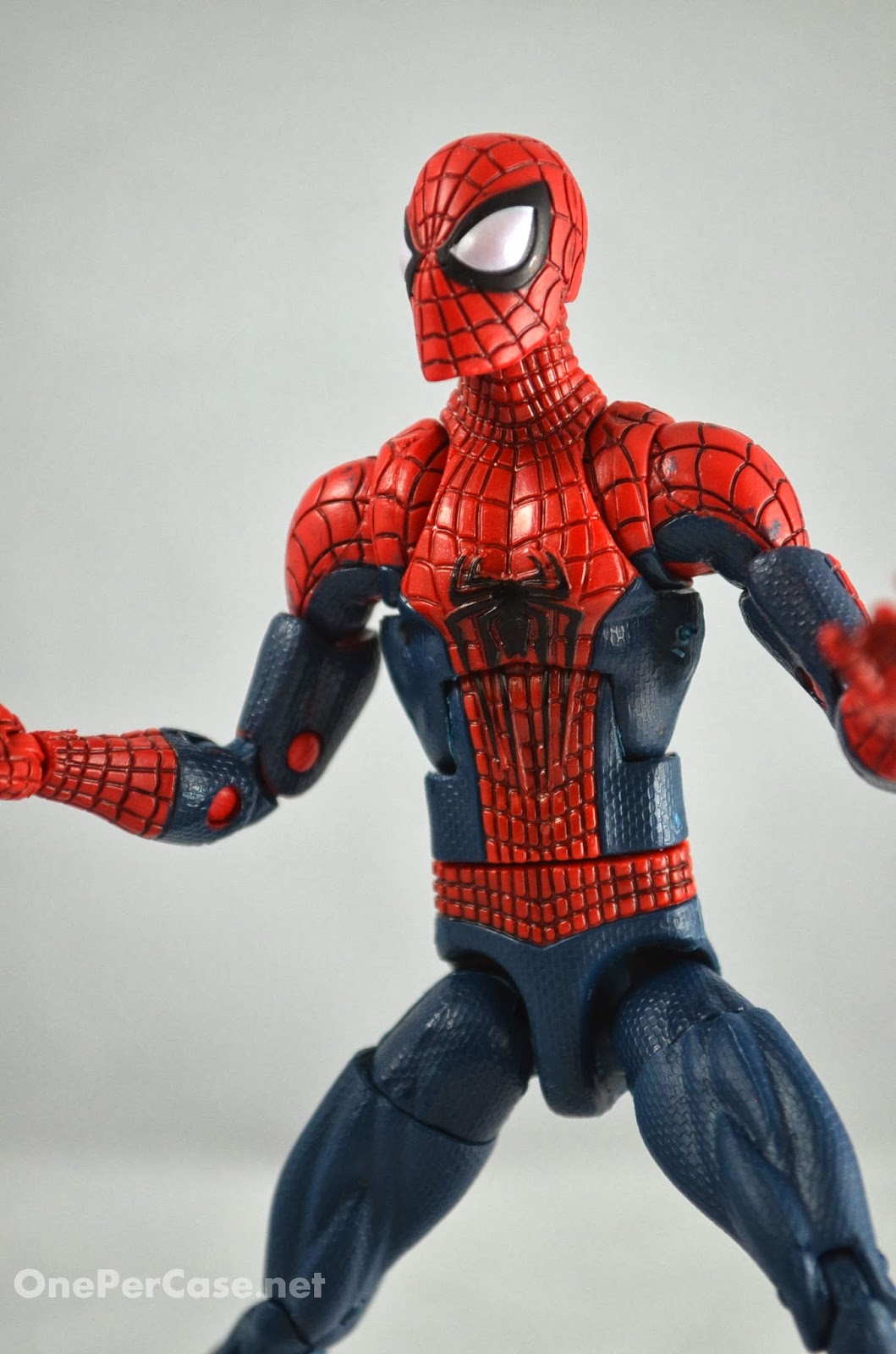 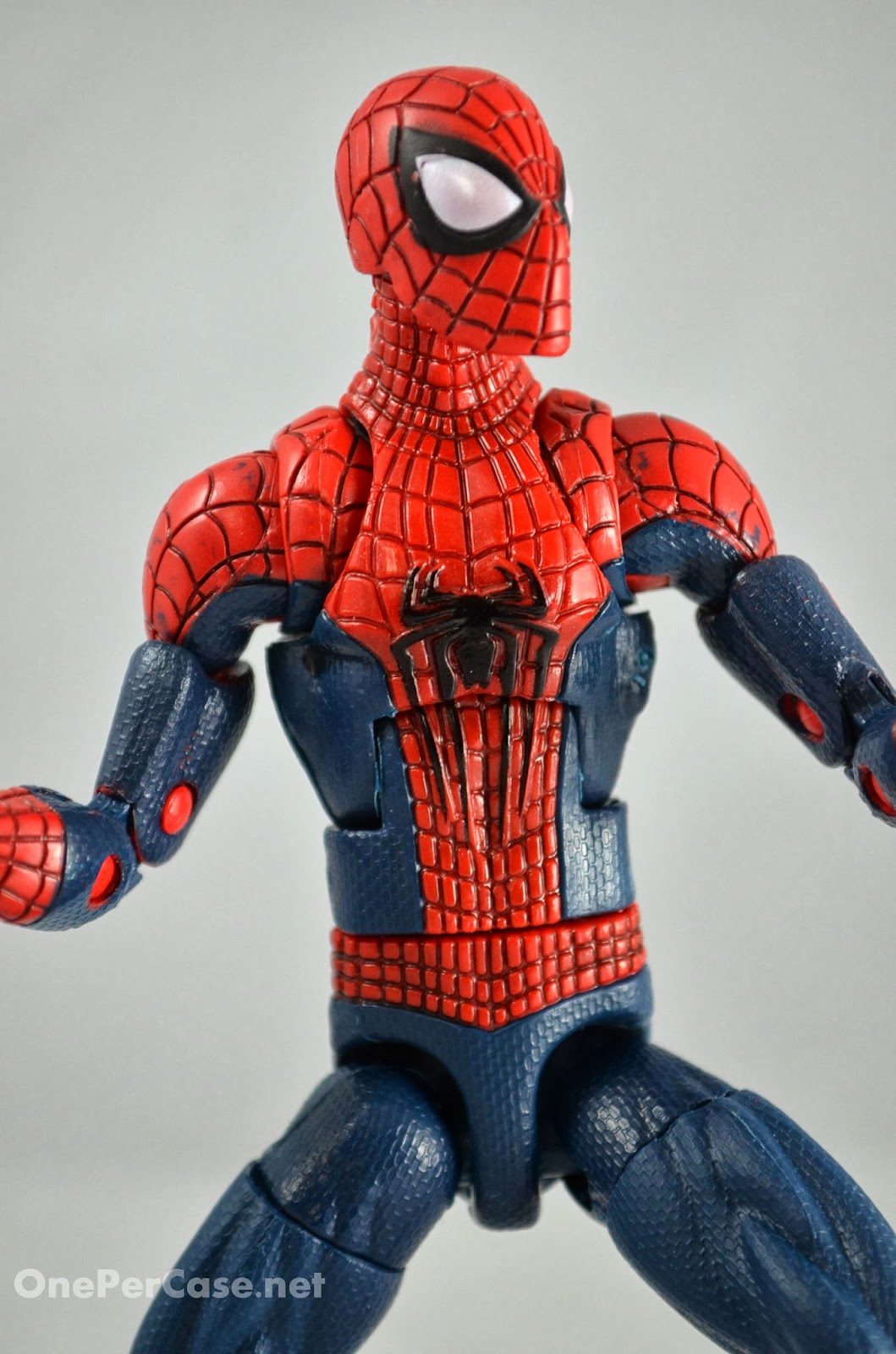 The figure is an entirely new sculpt, and is packed with detail.  The blue parts of the costume have the small hexagonal scale pattern throughout.  The web parts are of course adorned with the webbed pattern.  The eyes are the only perfectly smooth part of the figure.  Lots of great sculpting here. 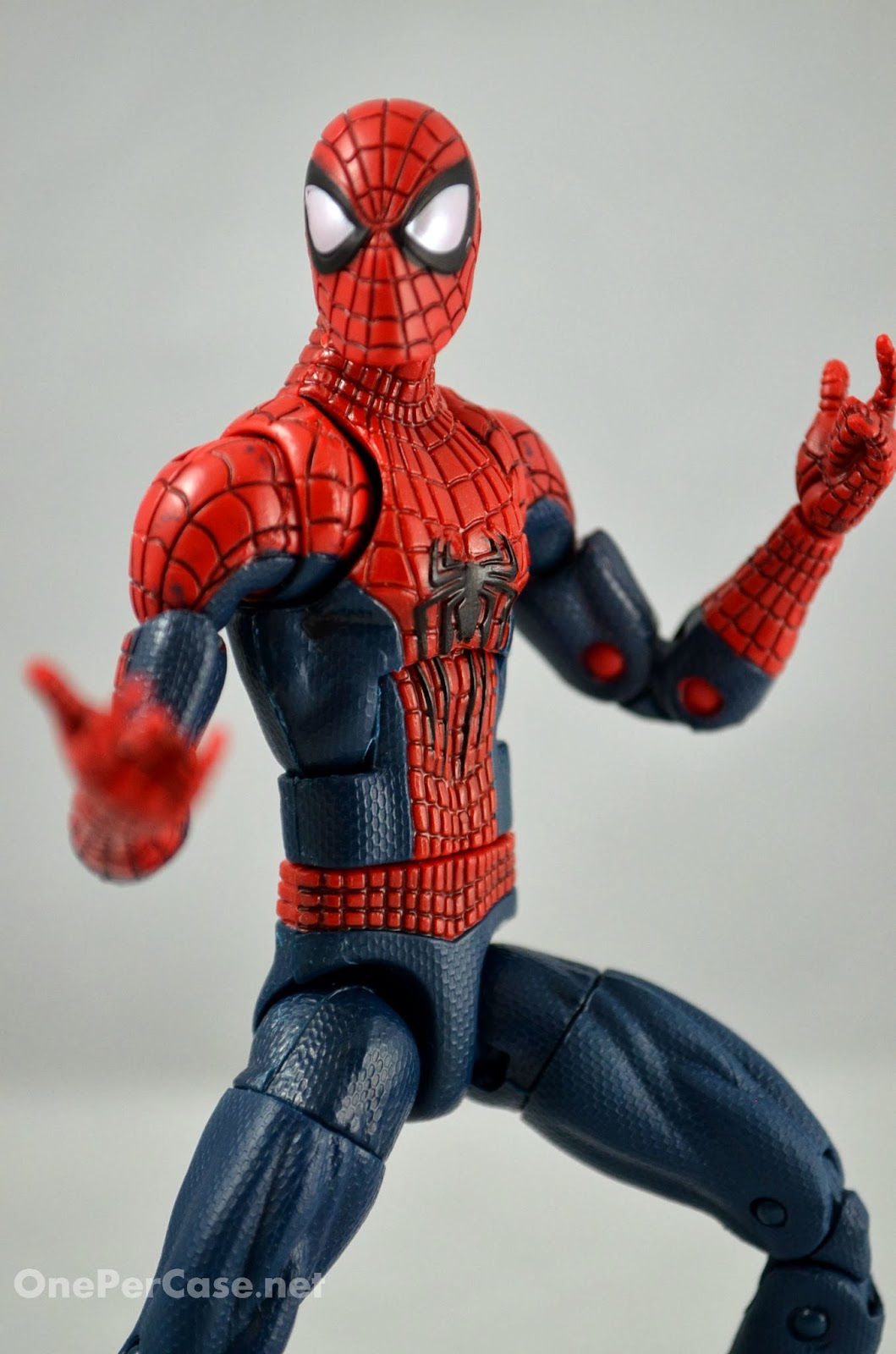 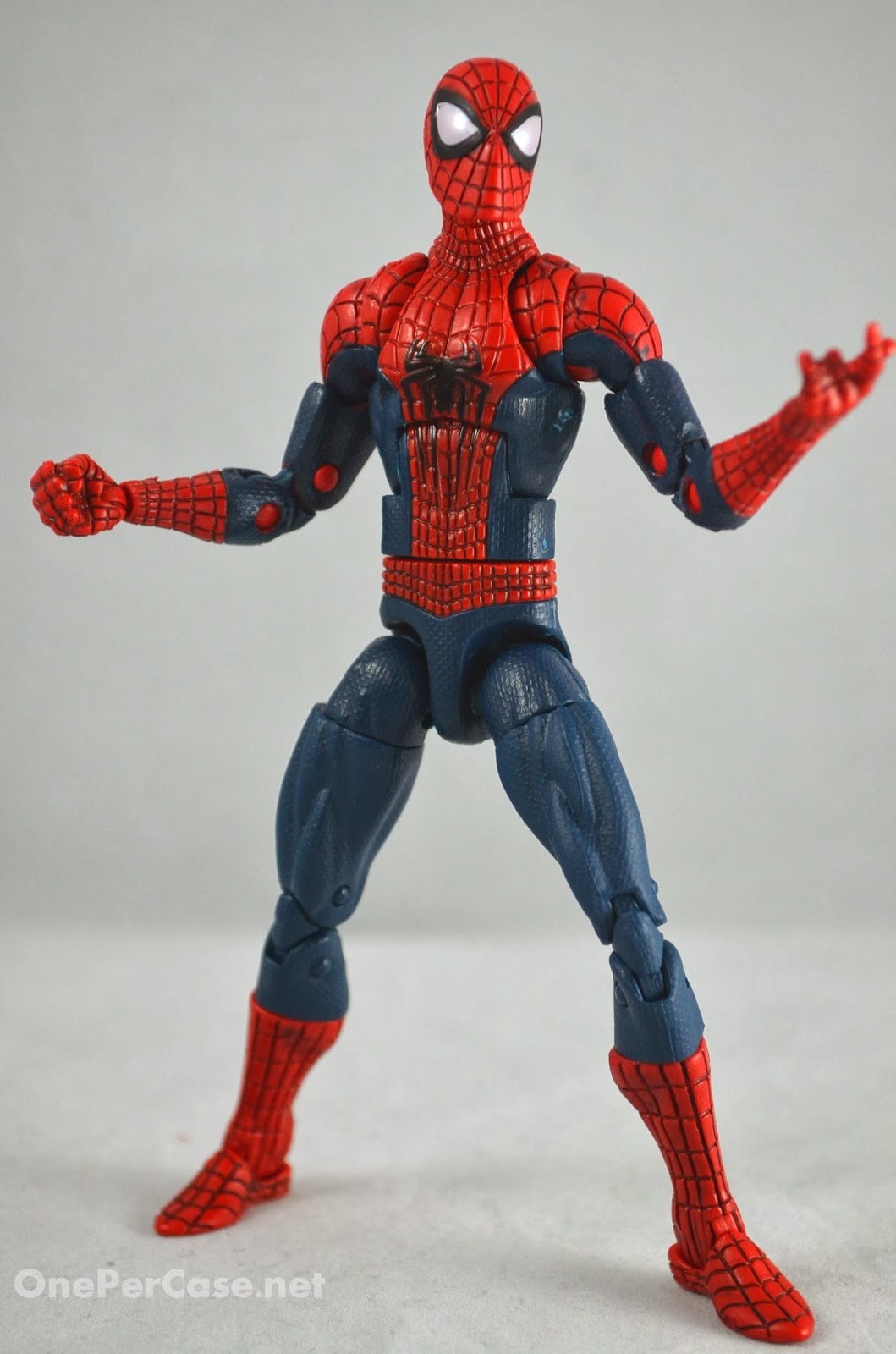 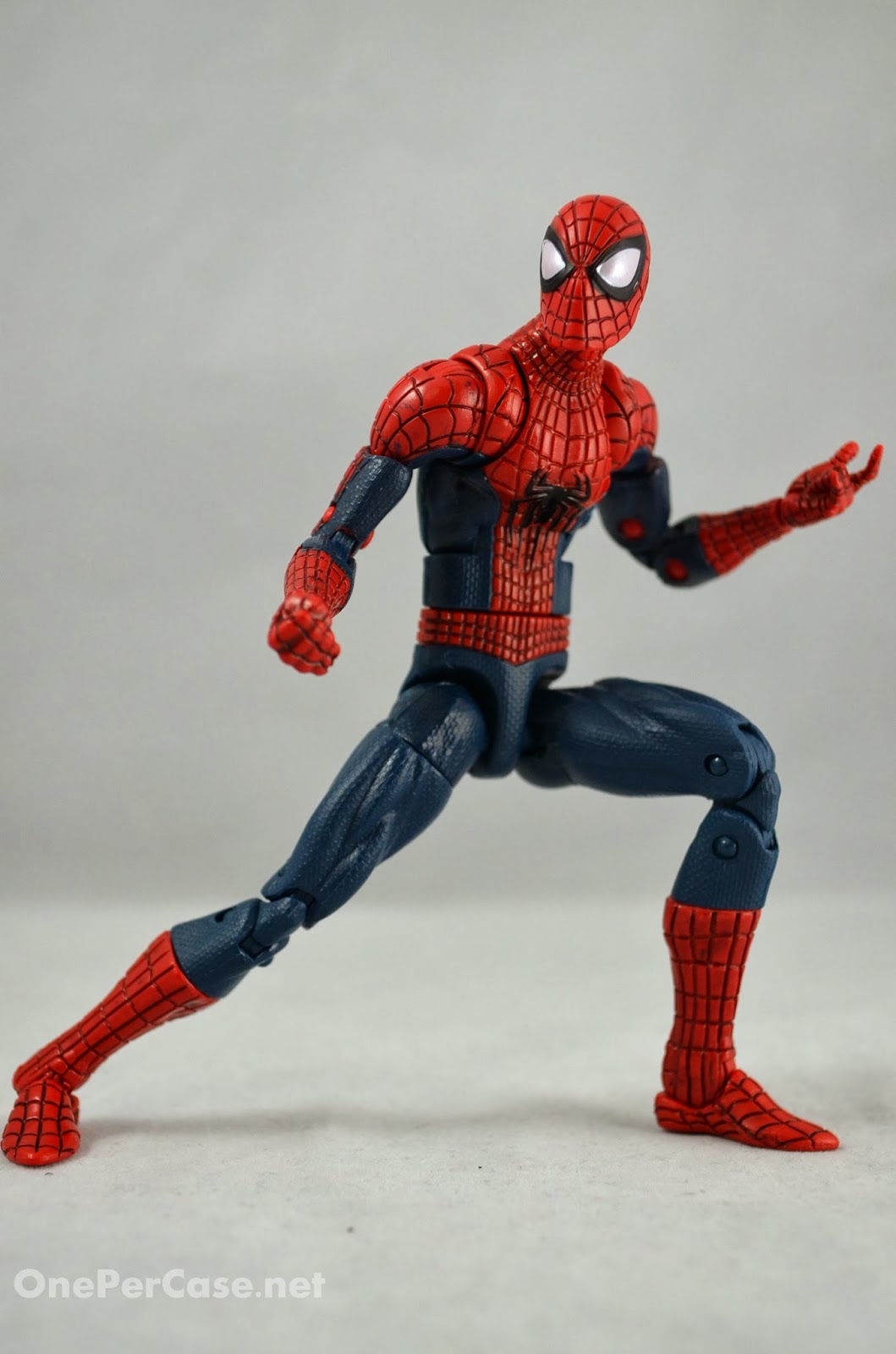 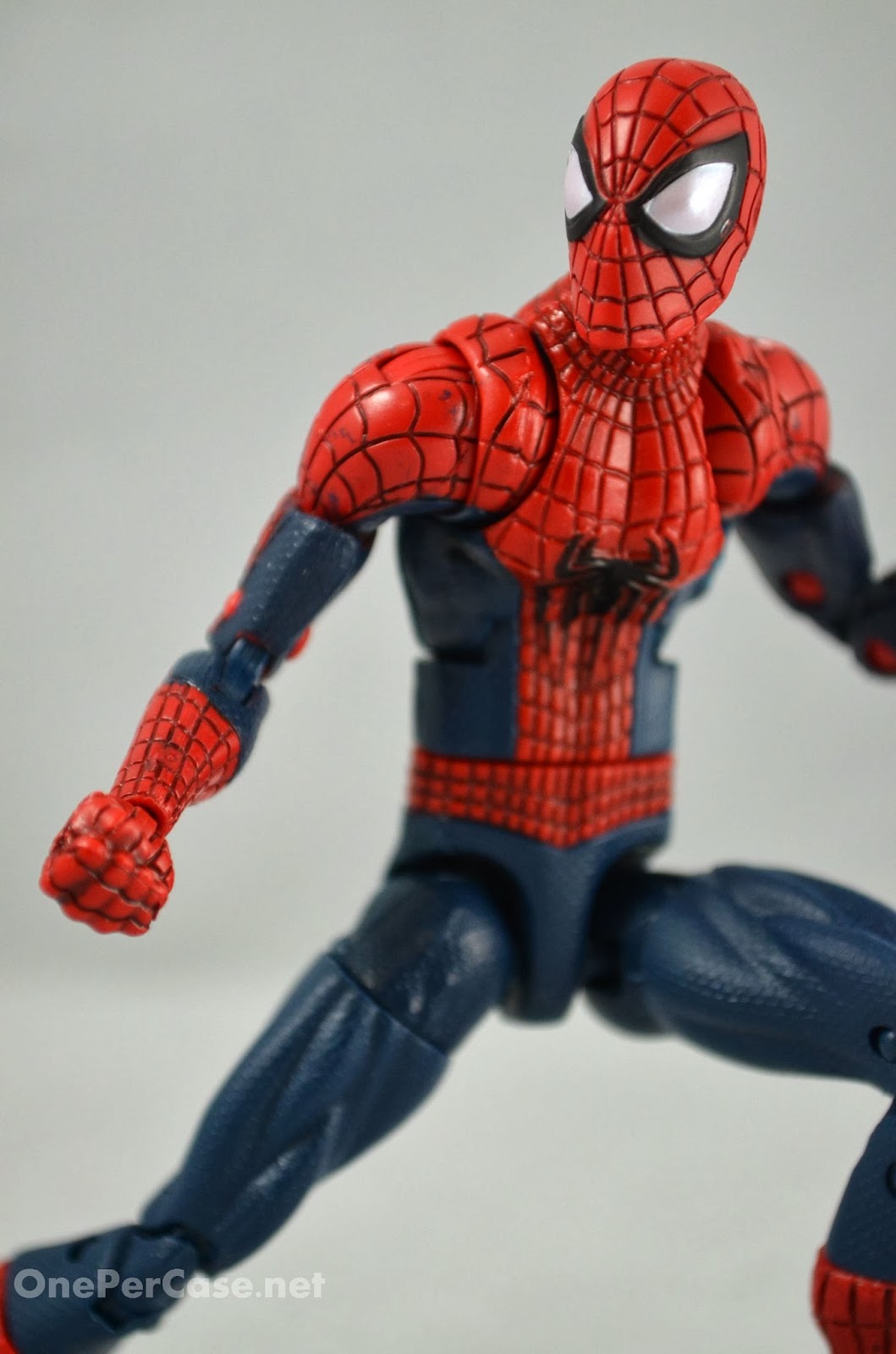 But the sculpt isn't without its flaws.  It's great, but by no means perfect.  For one, photos of early prototypes of this figure featured sculpted web lines on the suit, not the etched in version that we got (and have on just about every Spider-Man figure ever).  This isn't a deal breaker, but it looked so much nicer with the sculpted lines.  Secondly, the face seems to be just slightly squished in, at least to my eyes.  It looks good, but it doesn't really look like what we've seen of Andrew Garfield in the mask.  The shape is all wrong.  Third, and I think this is the one that bugs me the most, the pectoral articulation, which is great functionally, really interferes with the sculpt of the upper body.  The pieces just don't line up well.  It's like they were sculpted completely separately.  There are very few poses you can put the figure in where the chest and shoulders look coherent. 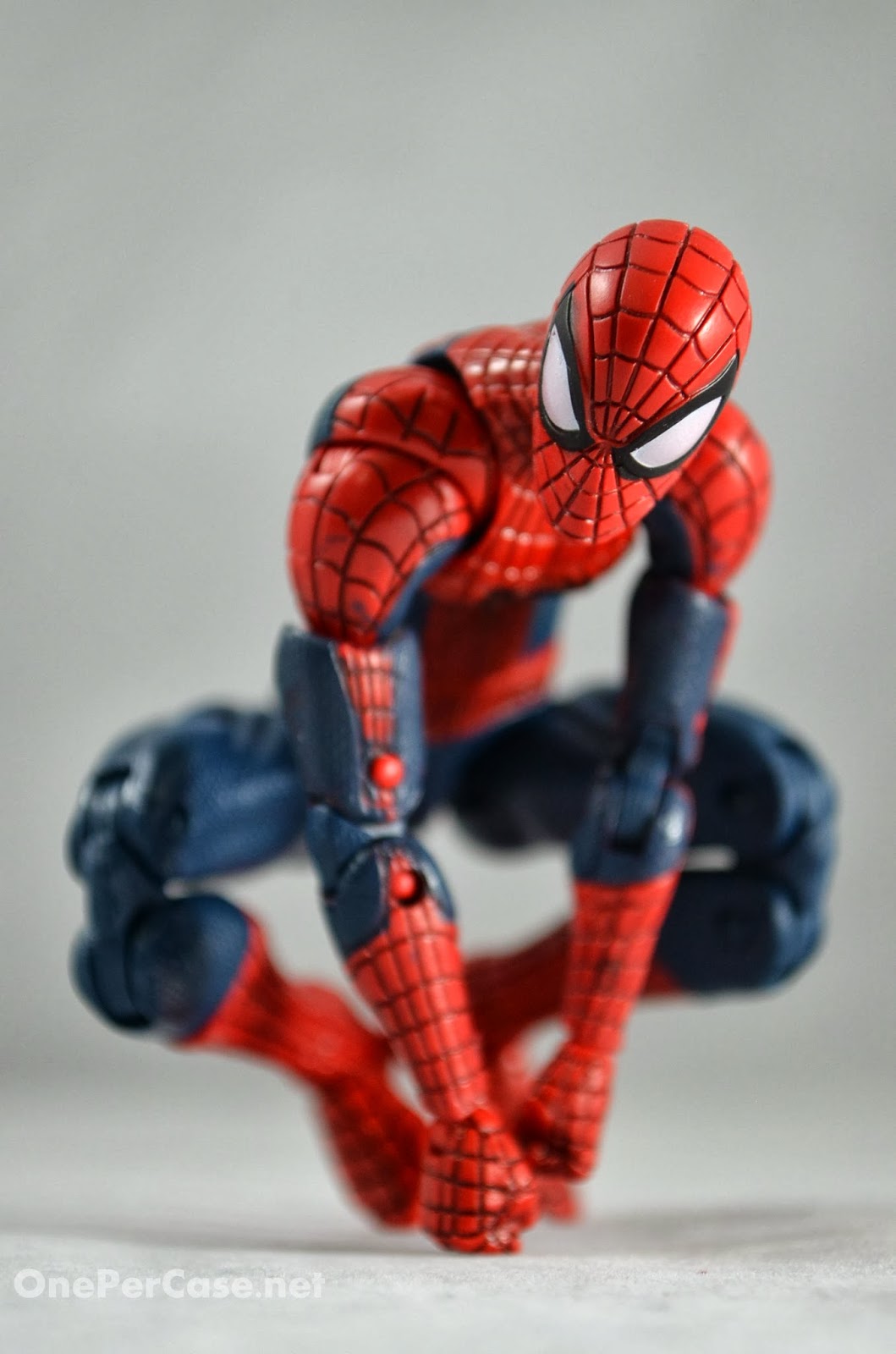 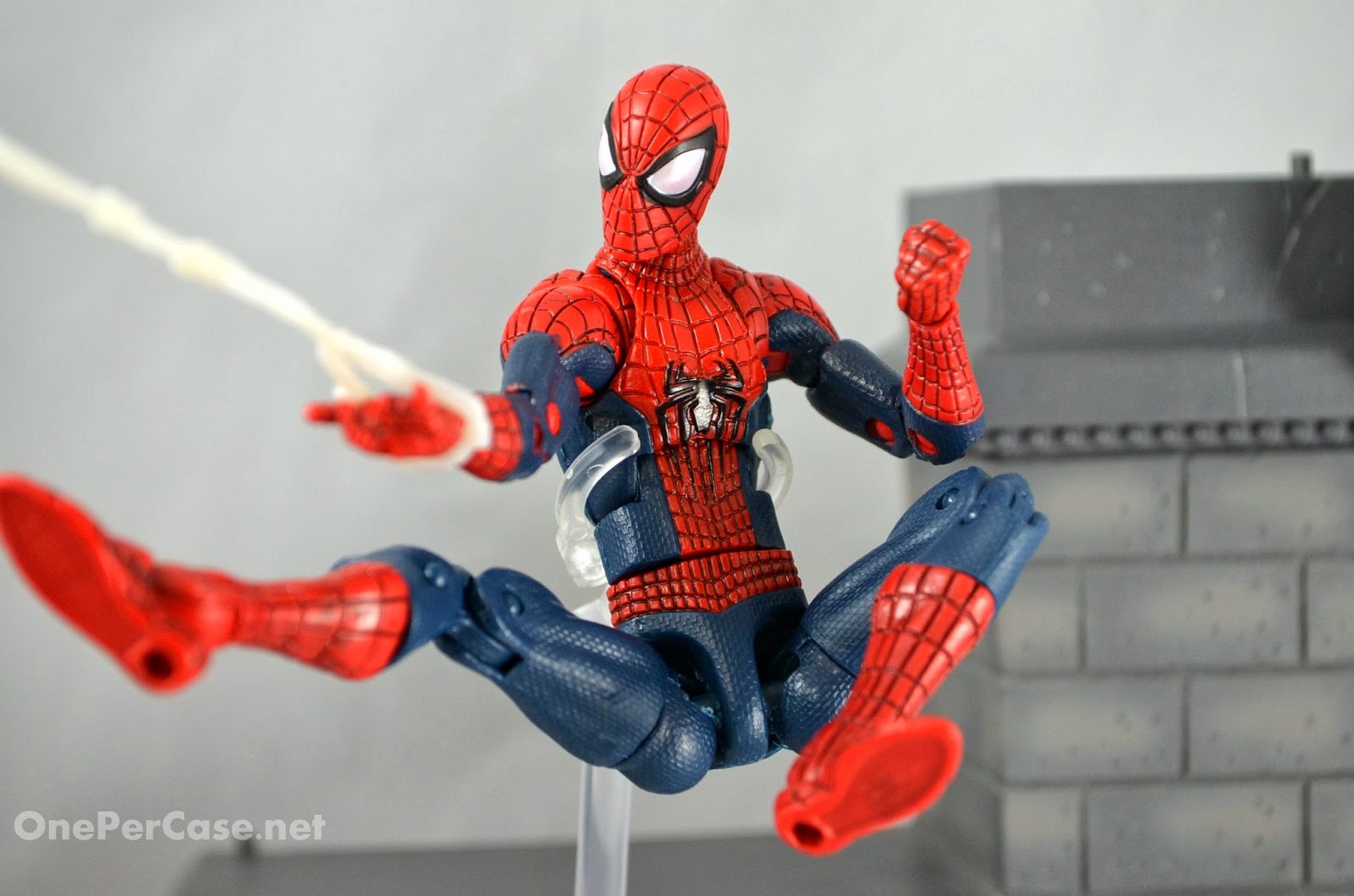 But what the sculpting decisions detract, the articulation makes up for.  This is probably the most poseable Spider-Man we've ever received.  It even rivals the Spider-Man Classics Wave 12 McFarlane/Campbell Spidey.  In addition to the hinged pectorals, the figure also includes a ball-socket and hinged neck, ball-hinged shoulders and wrists, double jointed elbows and knees, a ball-jointed torso, waist swivel, ball-socket hips, thigh swivels, calf swivels, and ball-hinged ankles with rocker motion.  You'll be hard-pressed to find a pose he can't hit. 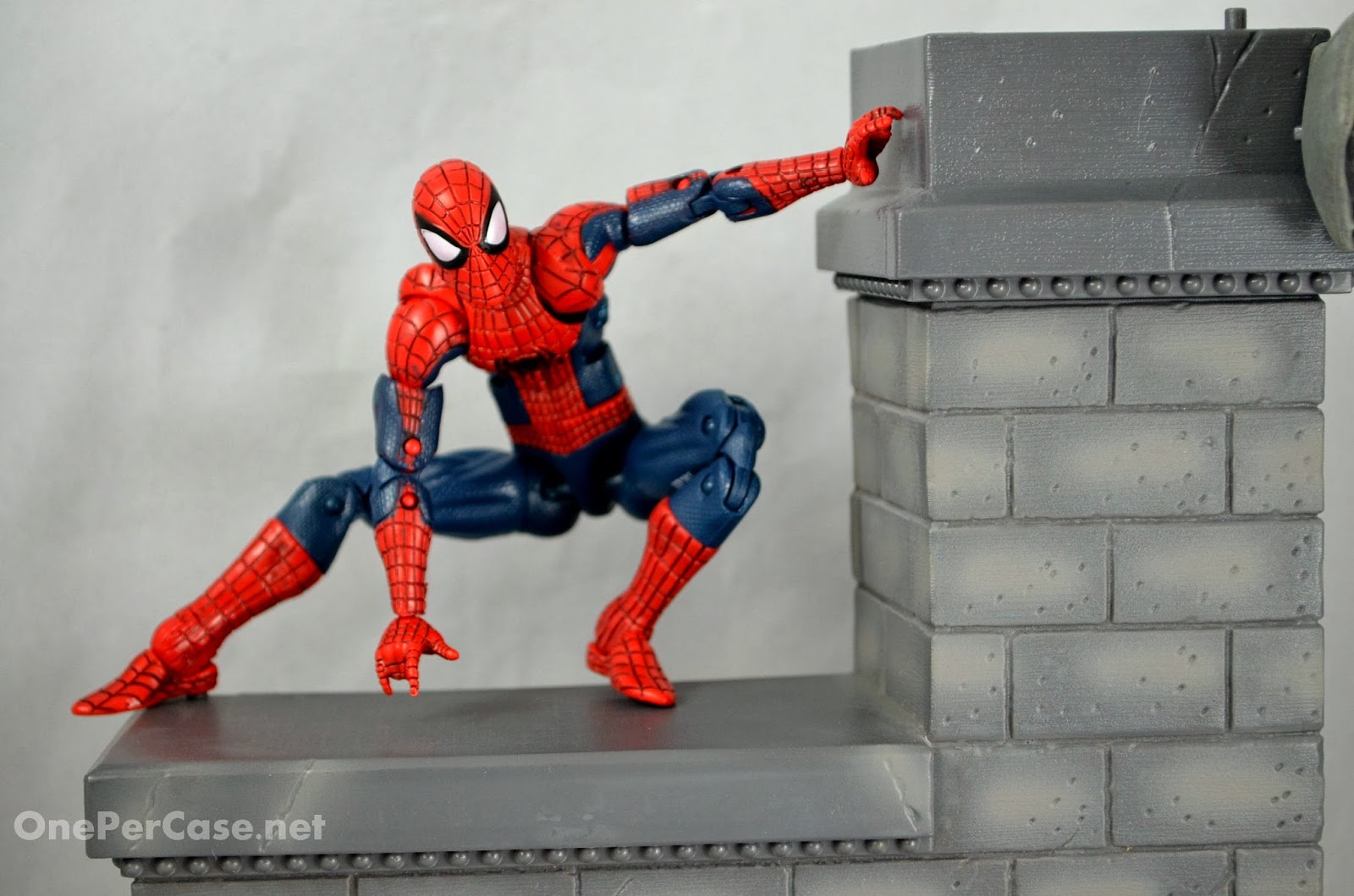 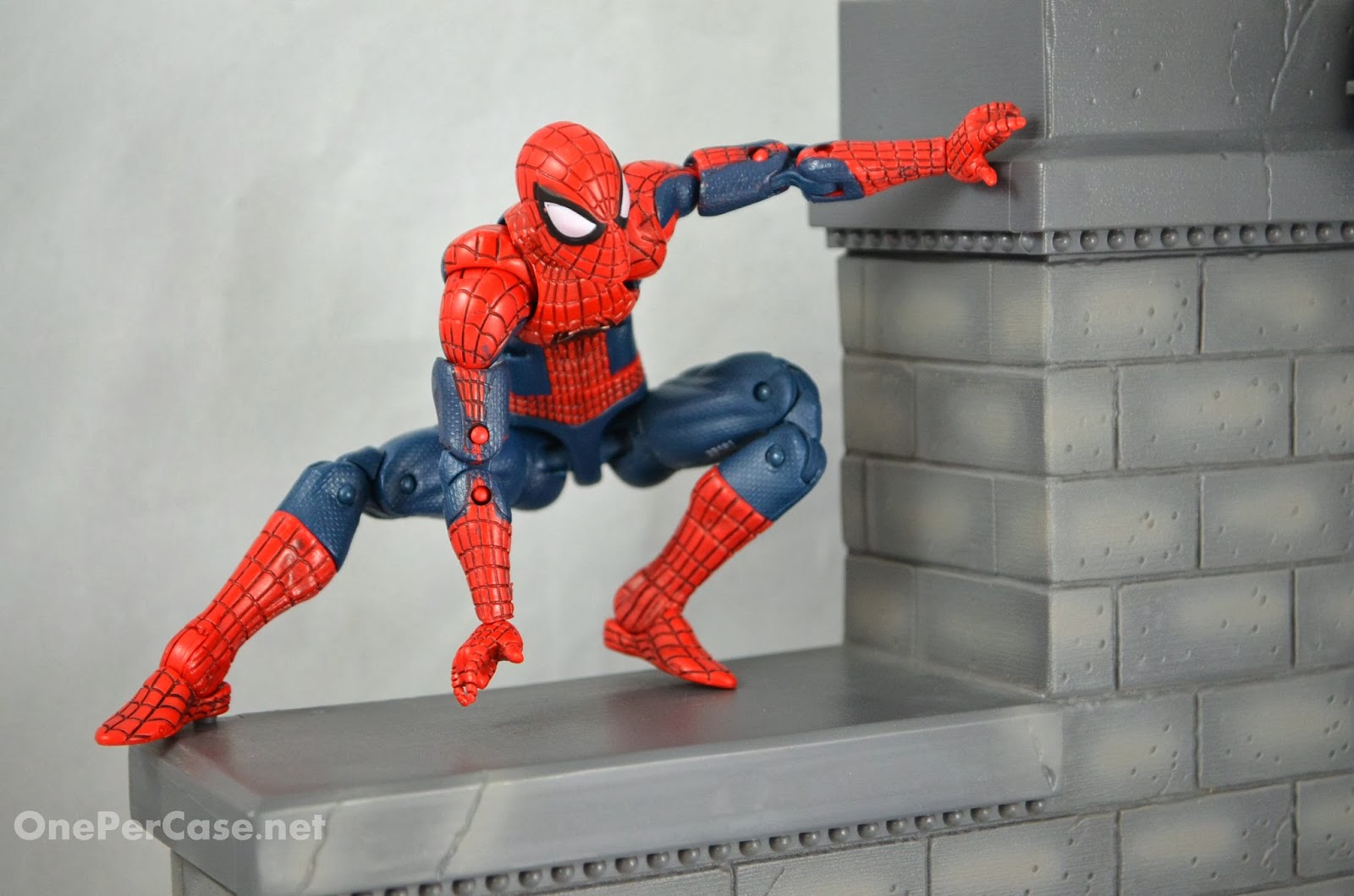 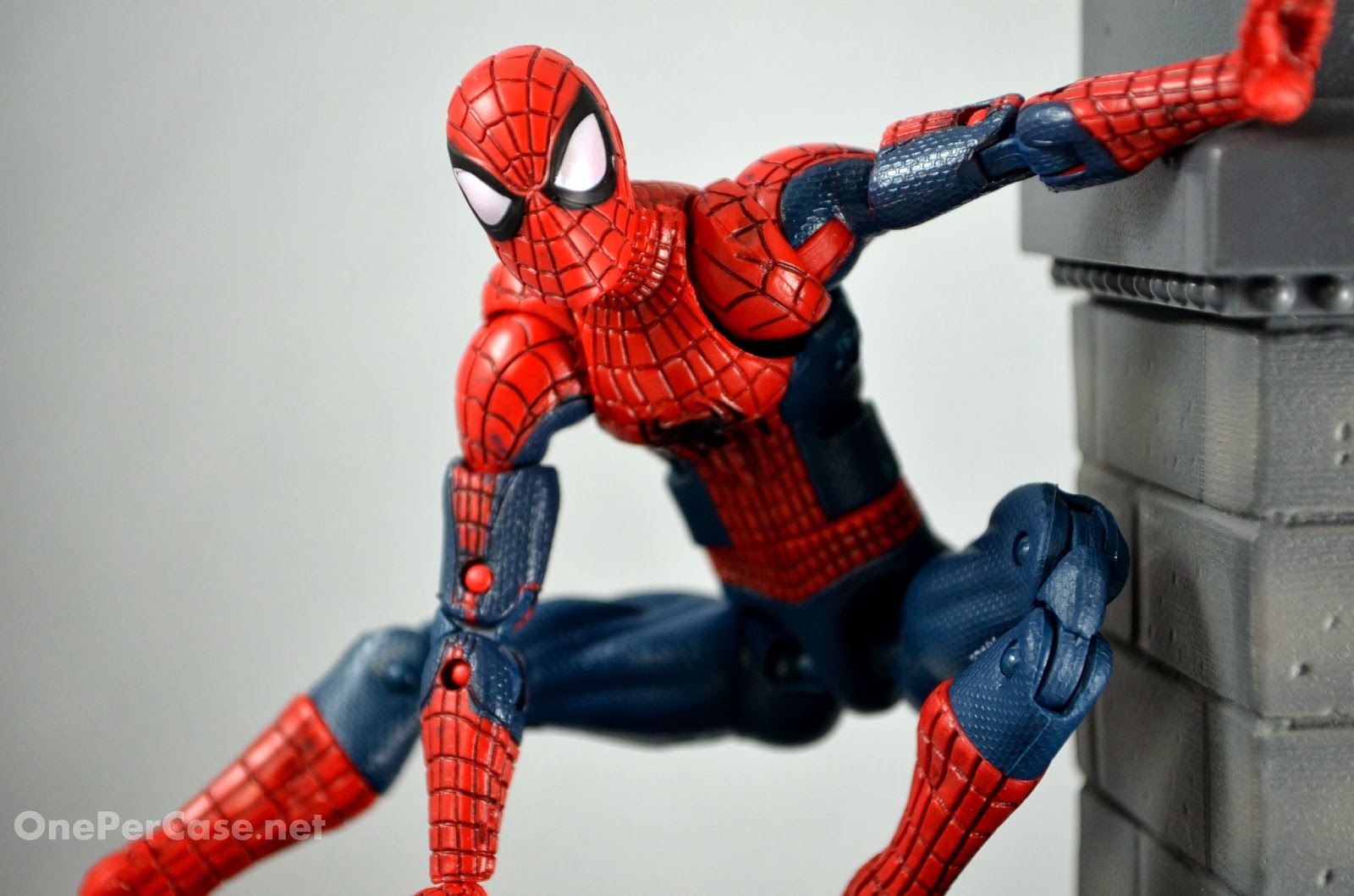 The paint is pretty simple, with most of the figure being cast in red and blue plastics, and some areas painted red or blue to match.  There's a black paint wash in the web lines to bring out the detail, but it's just a little sloppy, and can be seen on some of the raised red areas as well.  Not a big deal.  The spider emblems on the chest of most of the samples I've seen have some sloppiness, so that's one to watch out for.  Same goes for the eyes.  I haven't seen any with perfectly painted eyes yet, but some are better than others.  So look at those when picking this guy out. 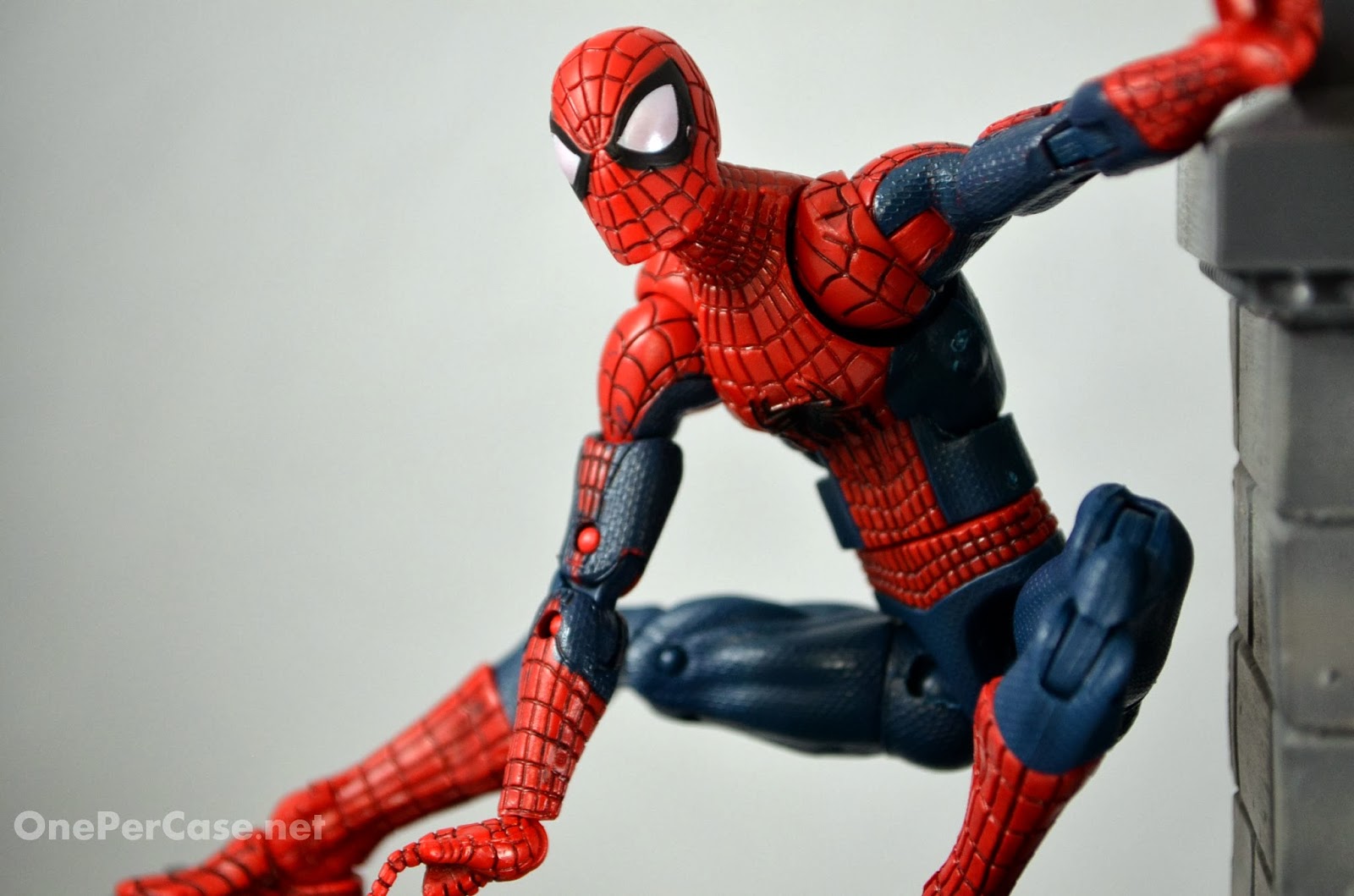 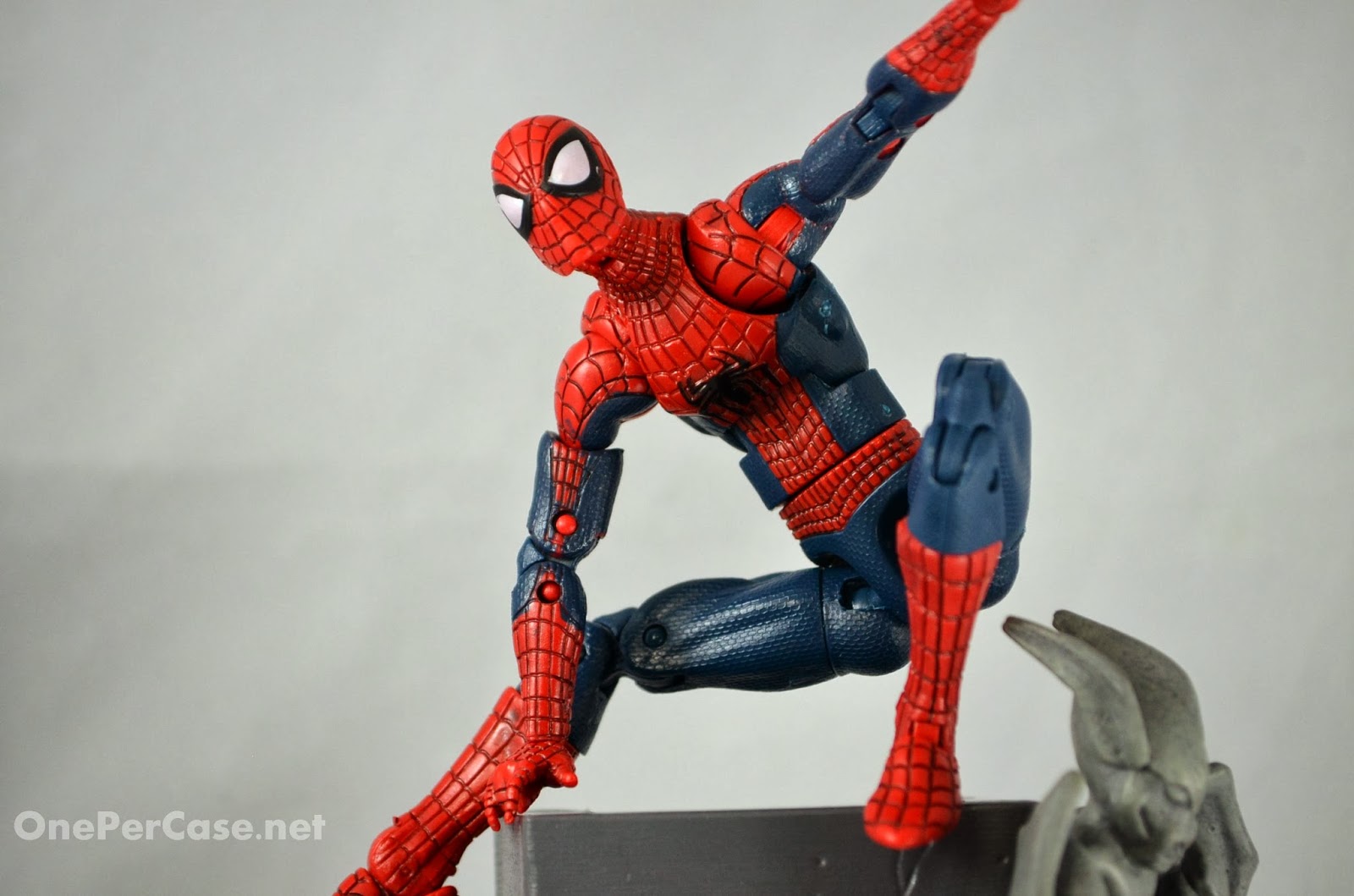 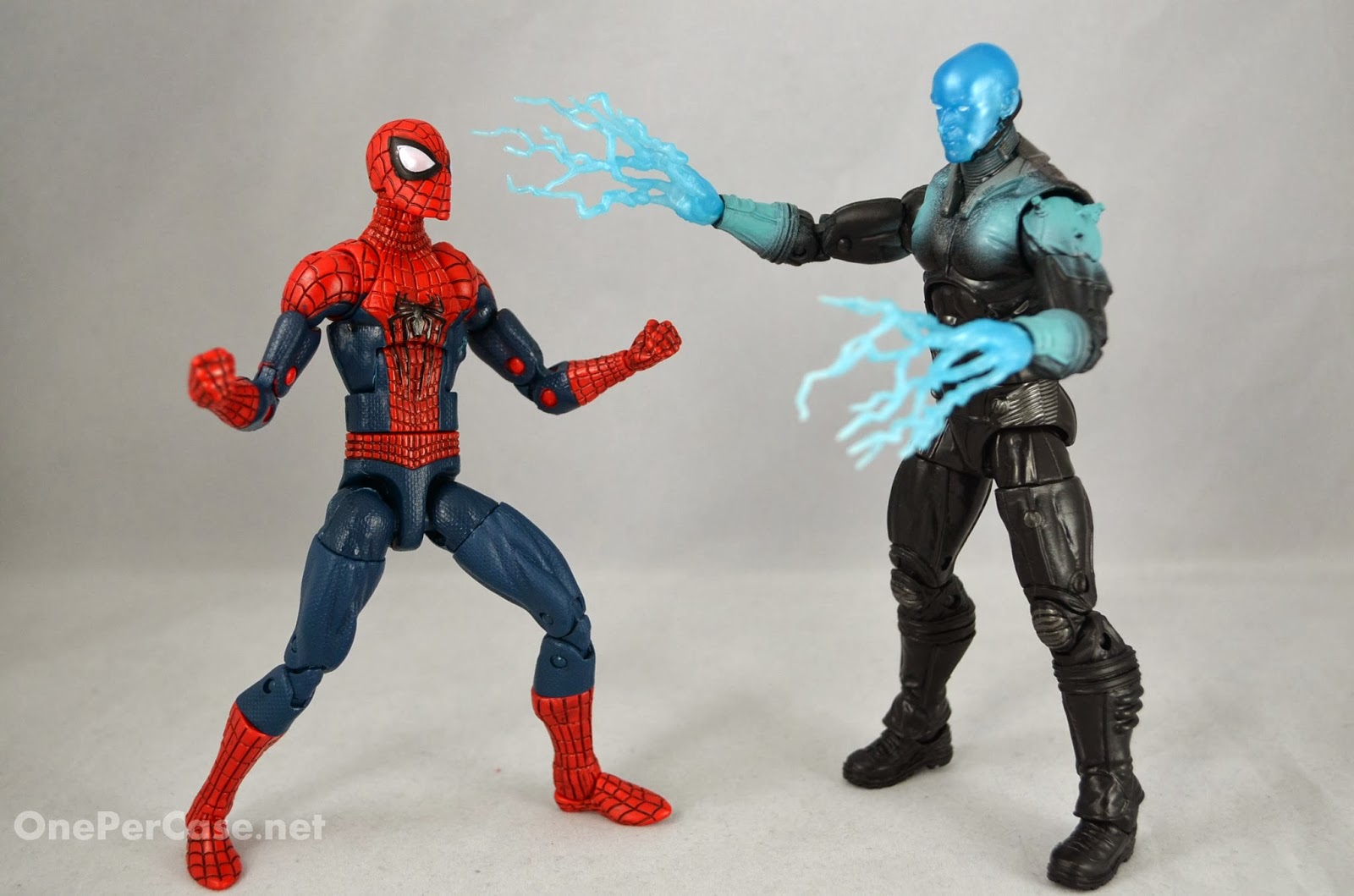 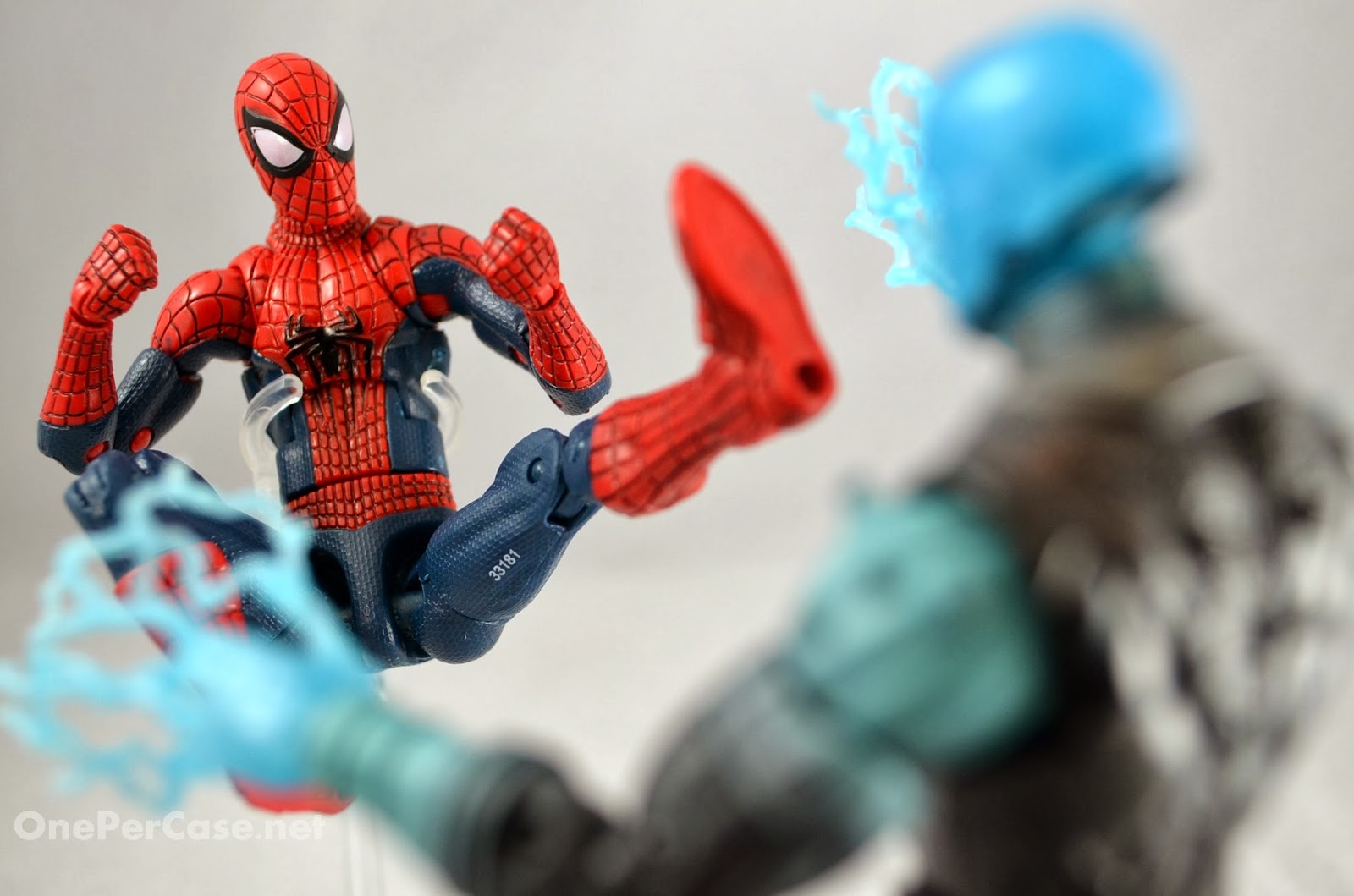 In the accessories department, this Spidey is kind of a mixed bag.  On the positive side, I have to give Hasbro big credit for including swap-able "thwippy" hands.  This is something I've been complaining about for years and have mentioned in many prior reviews.  It's awesome to see Hasbro finally going the route of including alternate hands (and heads with some figures).  On the other hand, there's not really anything else here.  No webbing accessories, no alternate unmasked Andrew Garfield head (yeah we got one with a previous movie Spidey, but it doesn't fit on this figure's neck), and nothing else.  Well, unless you count the Build-a-Figure piece. 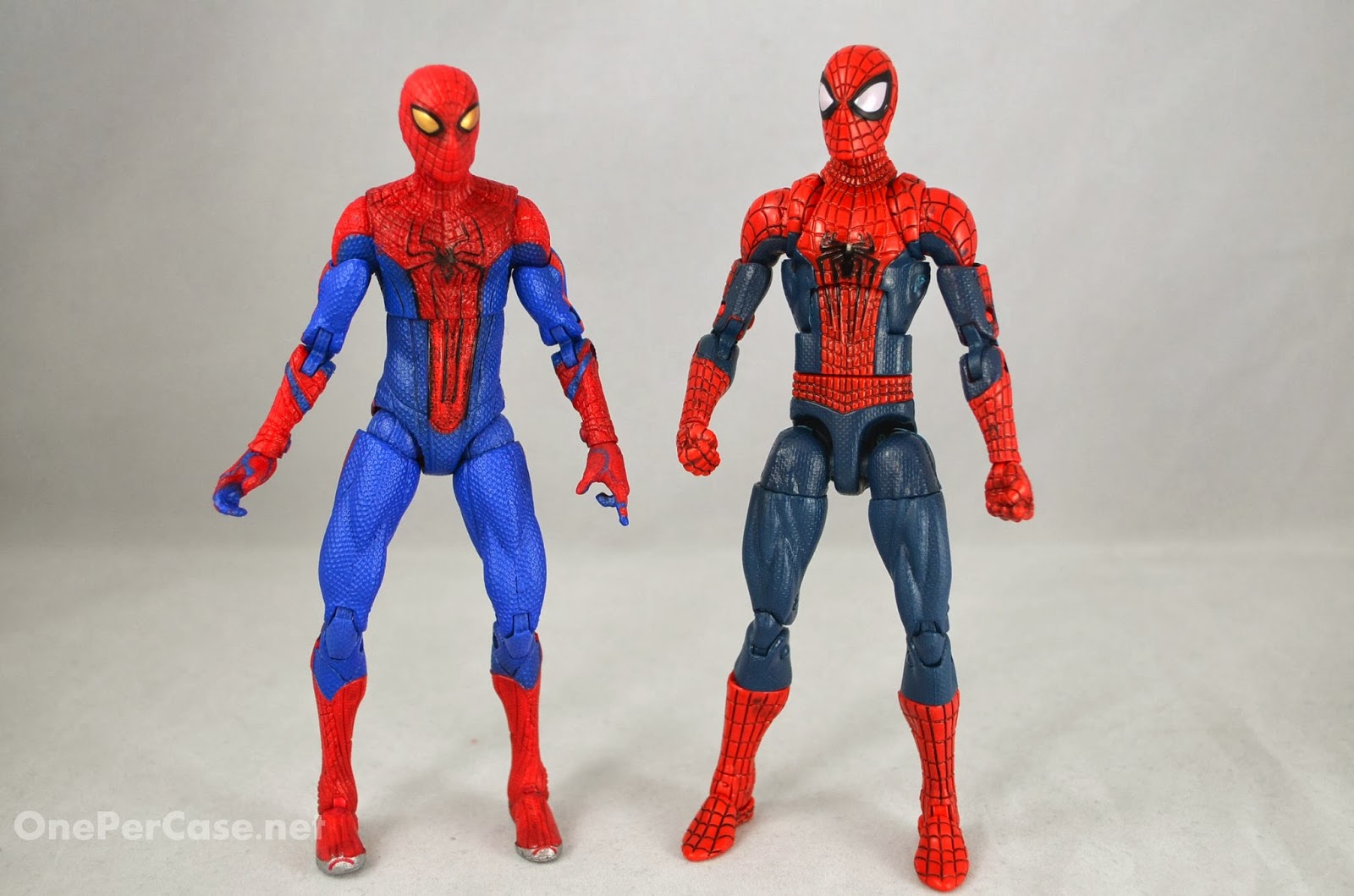 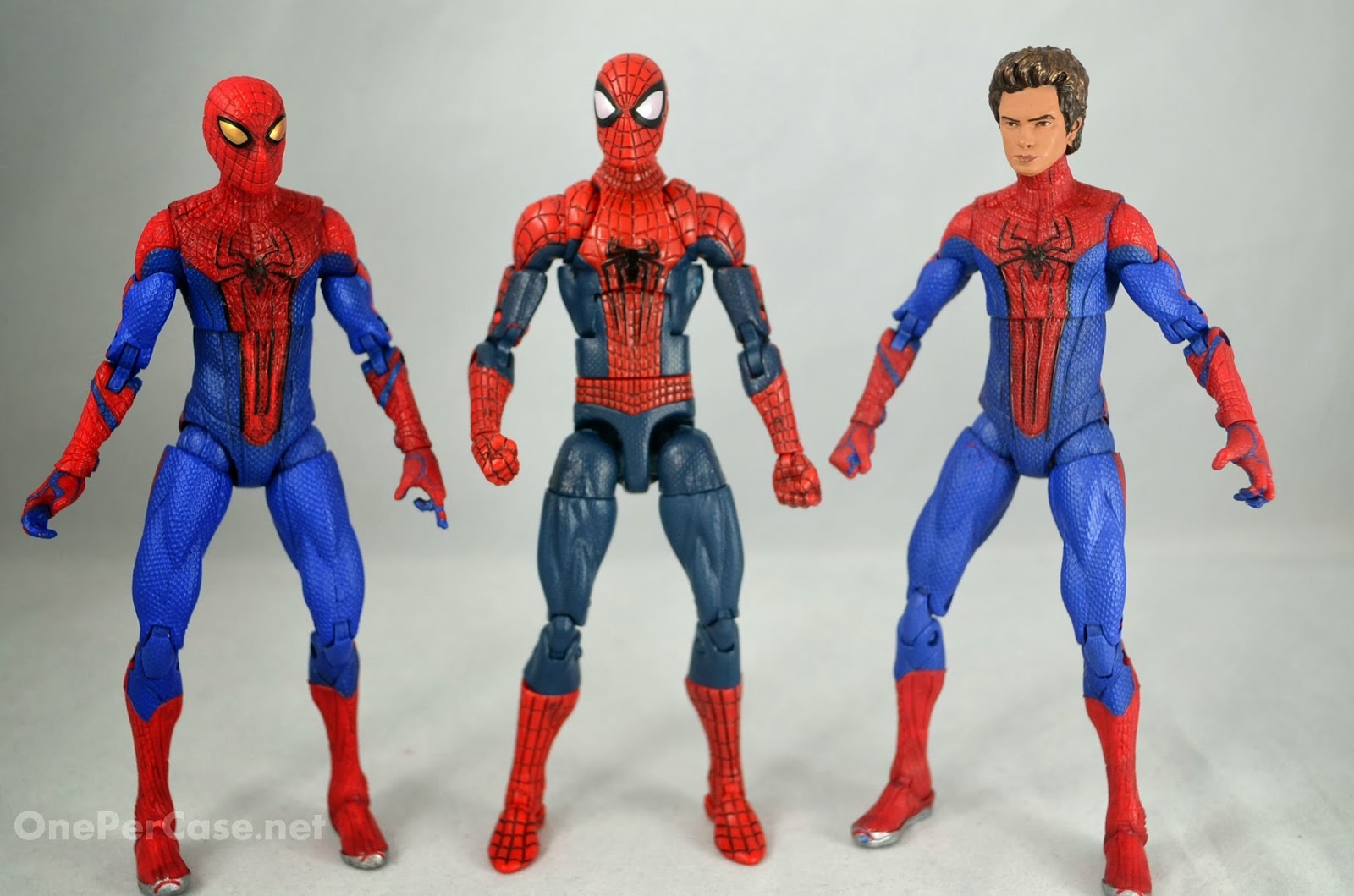 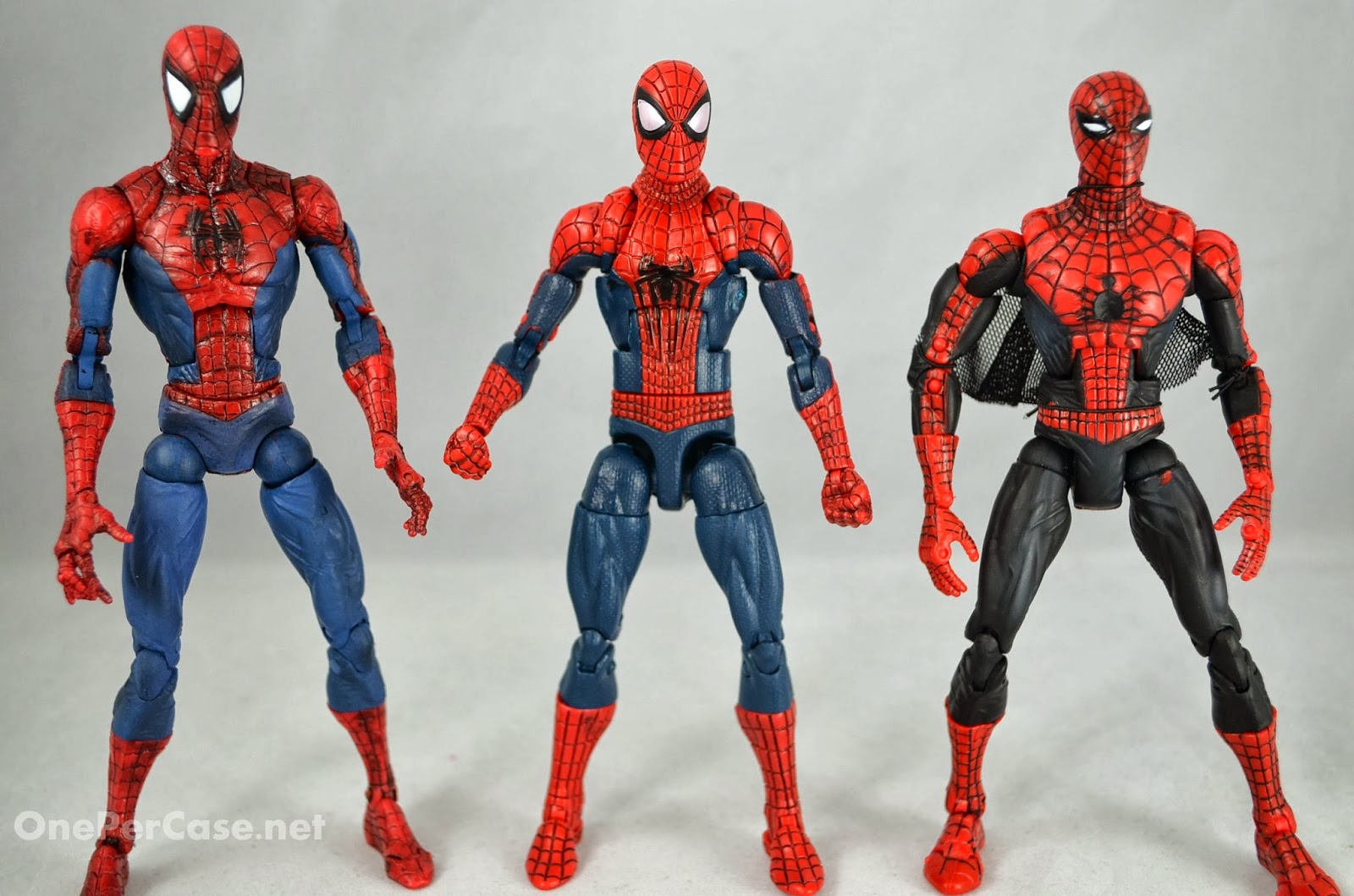 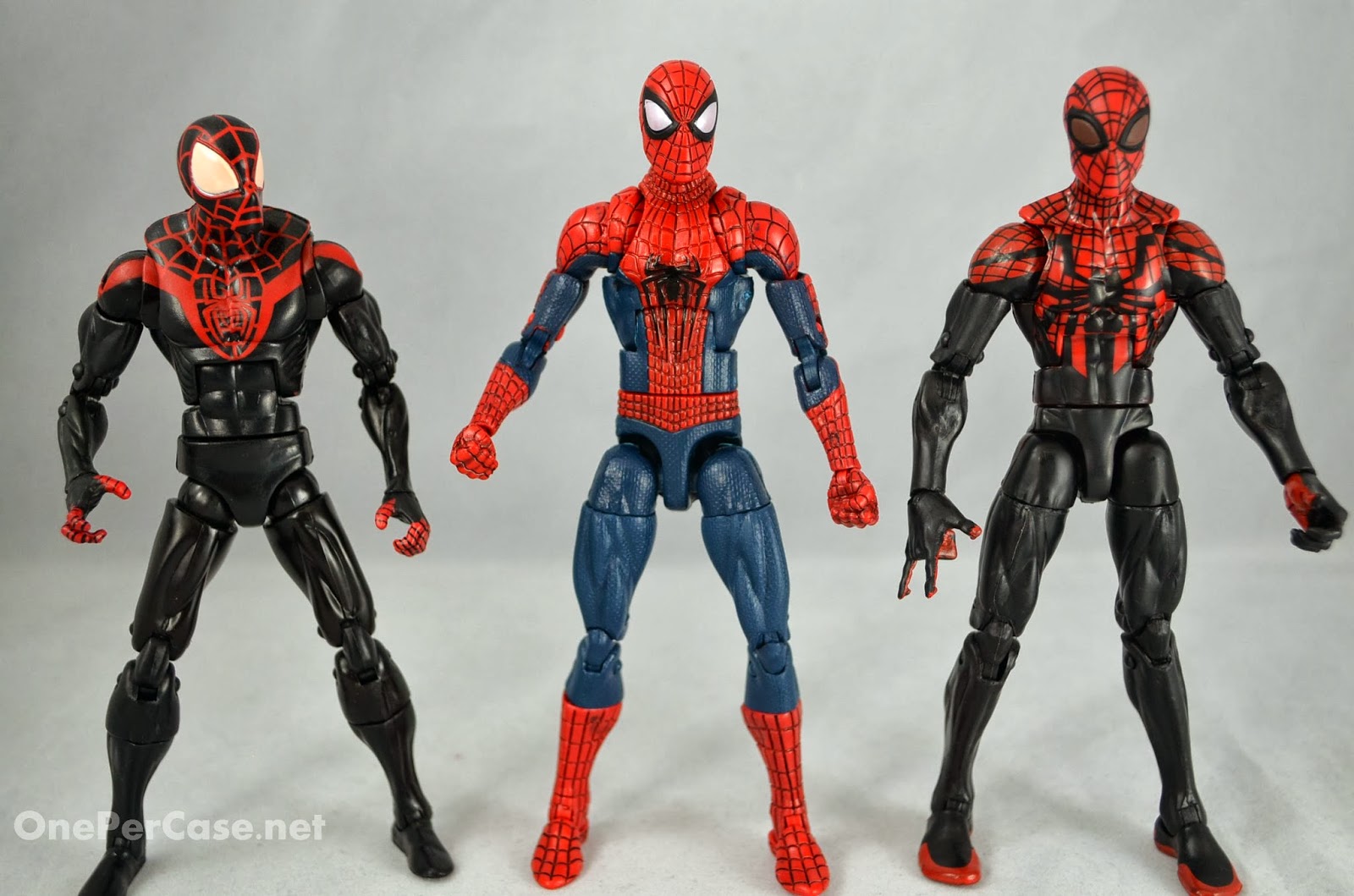 All in all, despite a few set-backs and questionable choices, this is a pretty good Spider-Man figure.  It is definitely the most poseable version of standard red and blue Spidey that we've seen in a long, long while.  And for many collectors missing that quintessential piece, this will fill the void nicely.  It does a great job of straddling the line between movie figure and comic figure.  So it's worth picking up on that merit alone.  Being packed at two-per-case, this figure is already pretty easy to find, so if you haven't picked him up yet, you should have no trouble tracking one down at a local retailer.  Just watch out for bad paint.  If you need a new Spidey, go ahead and pick him up. 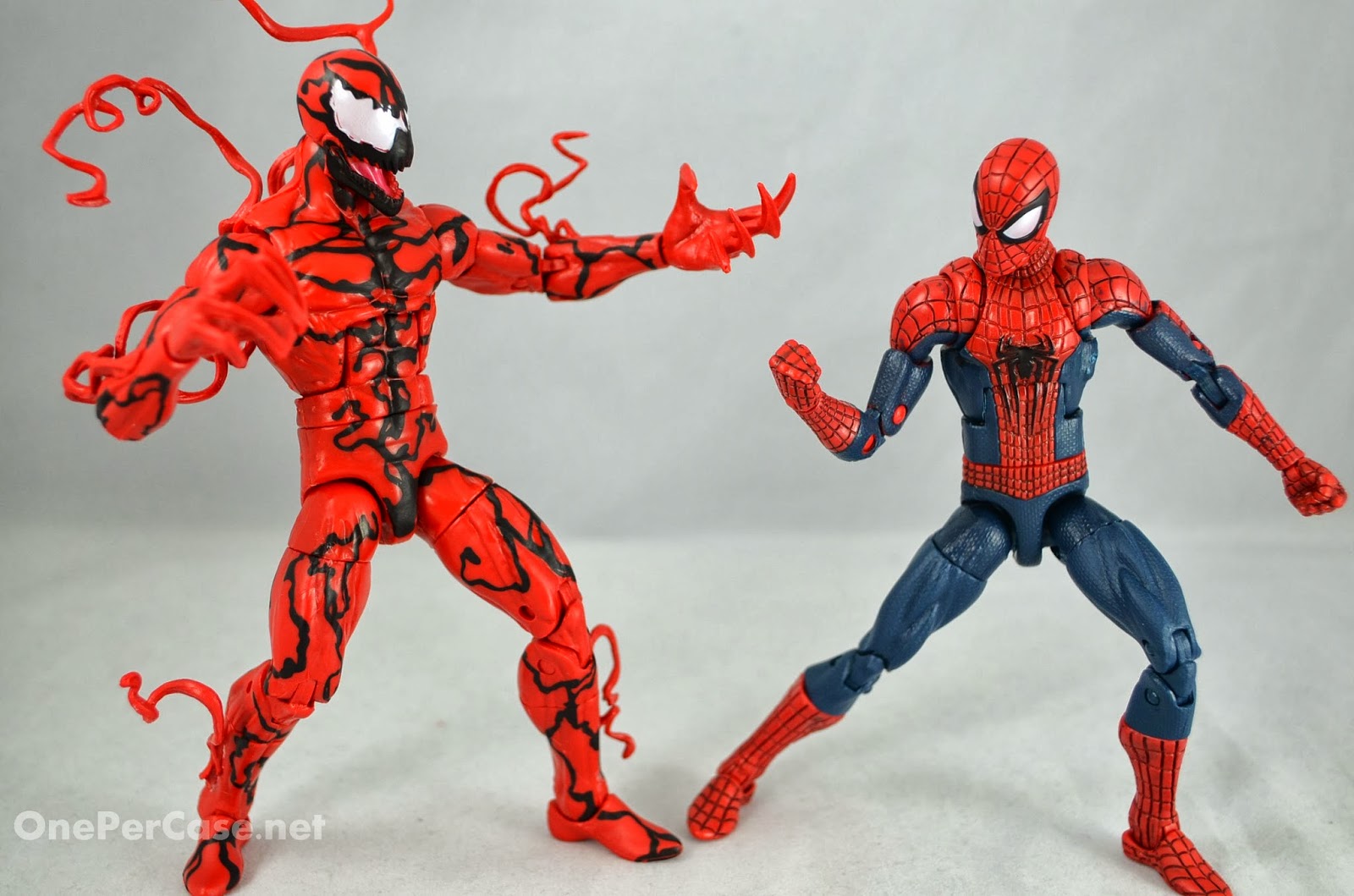 -Words and photos by Zak.  Packaged photos by Jason.
Posted by Zak Sousa at 9:37 PM