Maximum Carnage!  That was one of my favorite Spidey stories as a young comic book reading man.  Because what's better than the extremely homicidal offspring of a lethal alien symbiote with the powers of your friendly neighborhood Spider-Man?  Answer:  A kick-ass action figure of said homicidal alien baby spider spawn! 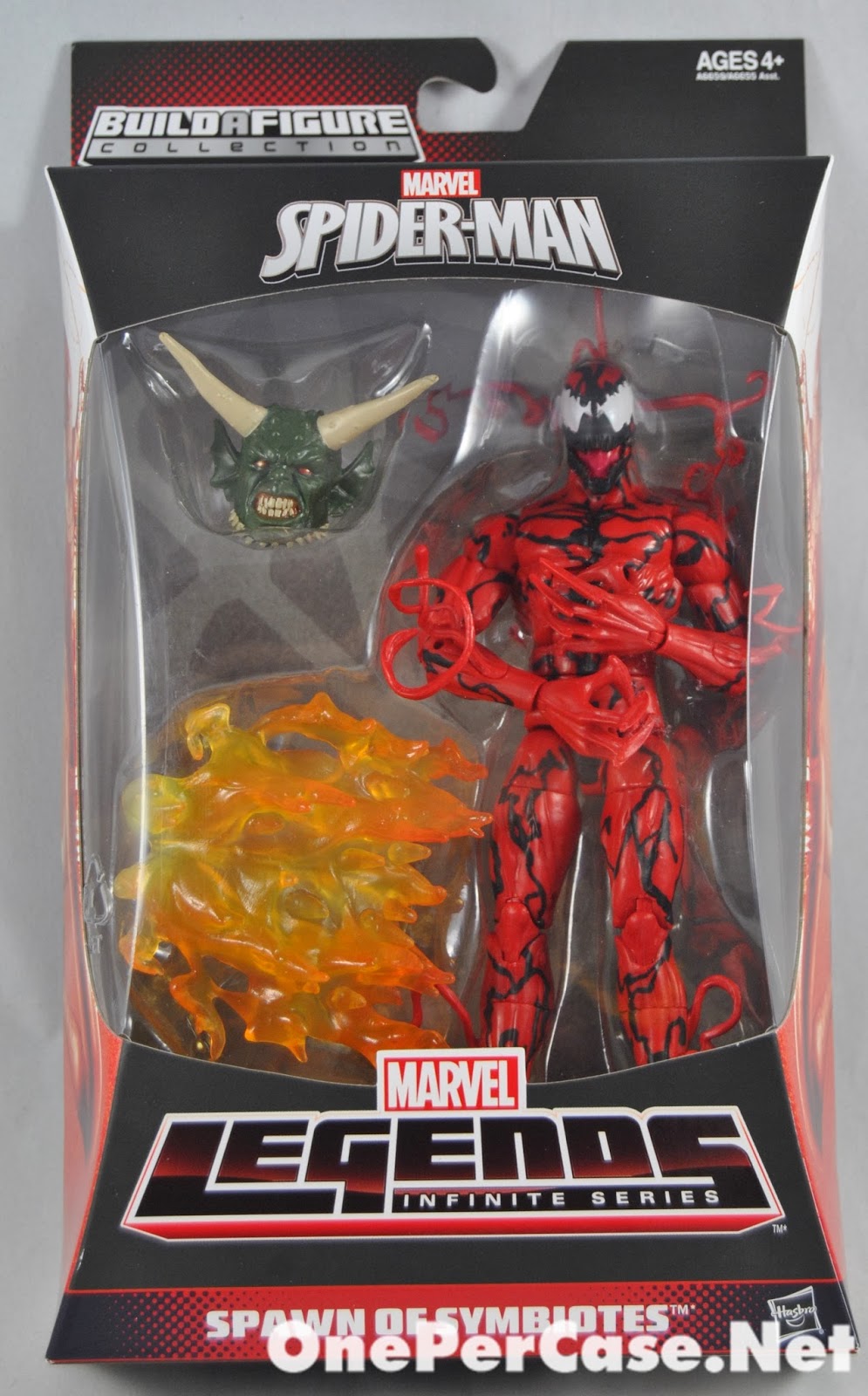 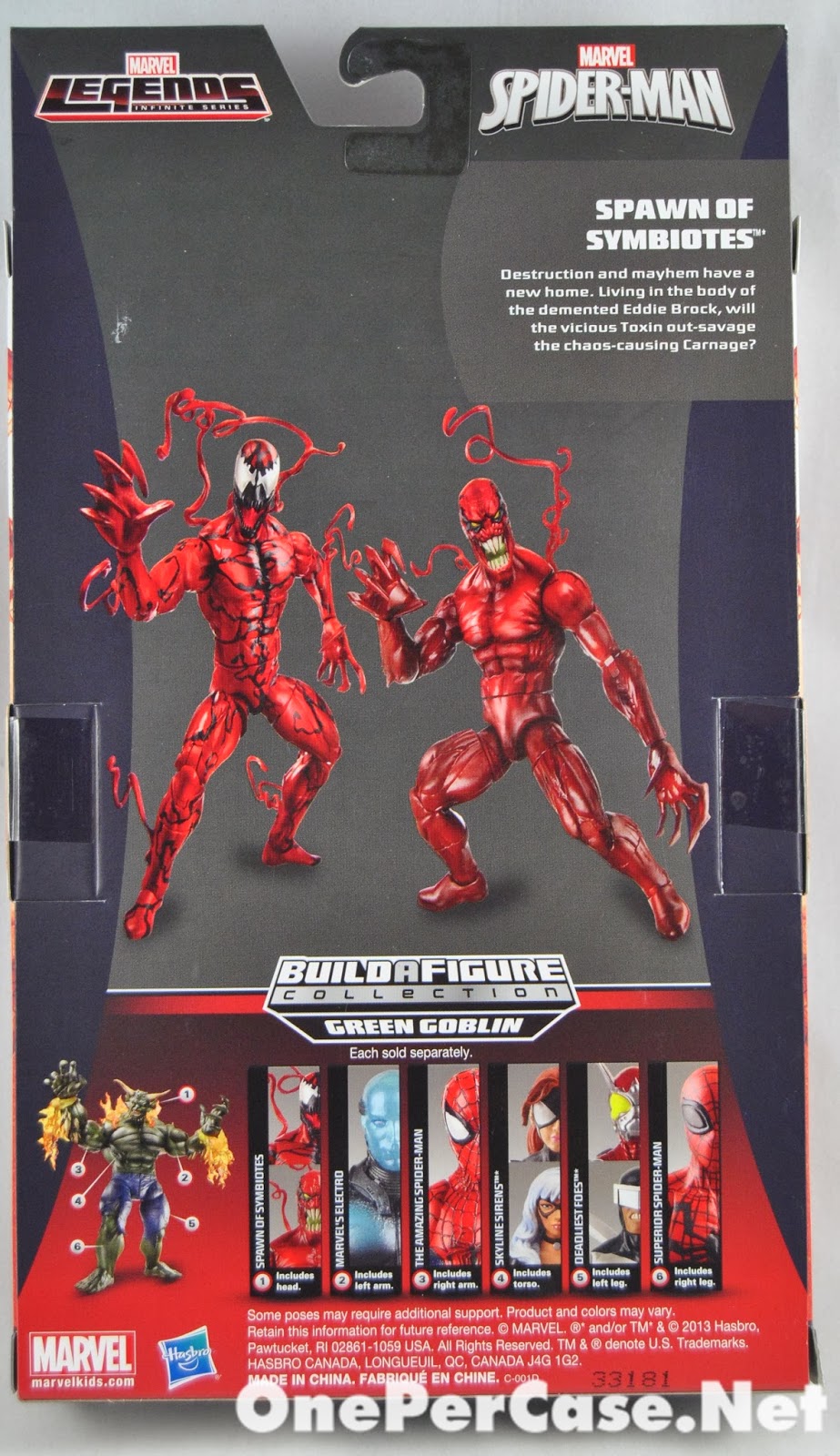 The Amazing Spider-Man 2 Marvel Legends Infinite line comes in the same new style of packaging as the simultaneously released Captain America: The Winter Soldier Marvel Legends Infinite line.  Man these line names are starting to get to be a mouth full.  Anyway, it's an enclosed window box now, no longer a bubble and card back combo, also similar to the Star Wars 6" Black Series.  As I mentioned in my Captain America Legends reviews, I really like it.  It's sharp.  It's classy.  It makes the figure look less like a child's toy and more like a quality collectible.  To differentiate this line from the Cap line, this packaging is predominately black and red, as opposed to black and blue.  And unlike the Cap line, these boxes are actually taped, which might slightly discourage theft, swaps, and douchebaggery on the toy aisle.  Maybe.  Carnage's package includes the name "Spawn of Symbiotes" rather than "Carnage", since he'll be swapped out for Toxin in wave two.  Both Carnage and Toxin are shown on the back, as well as a generic bio for both of them and a cross-sell for the rest of the wave. 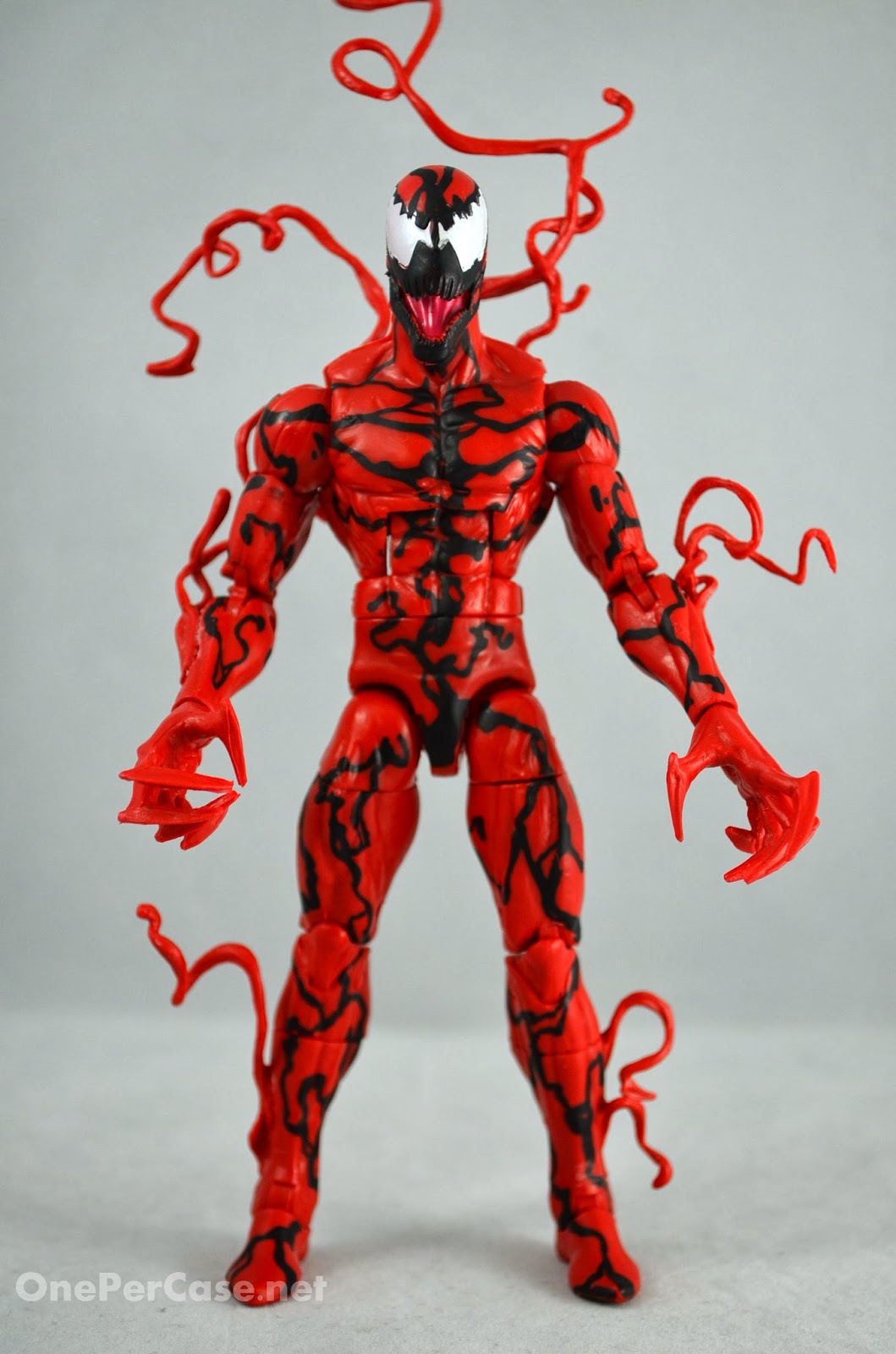 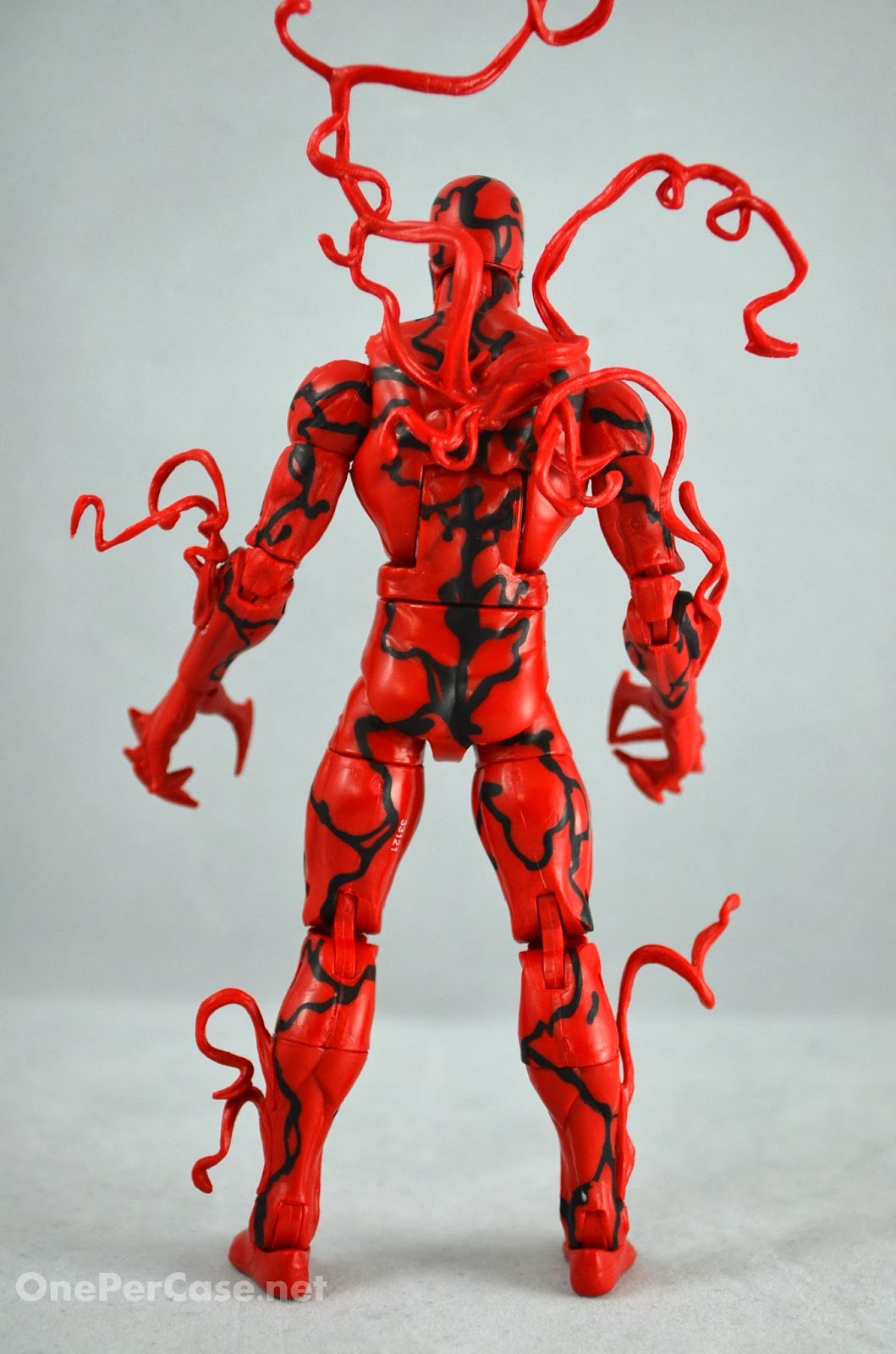 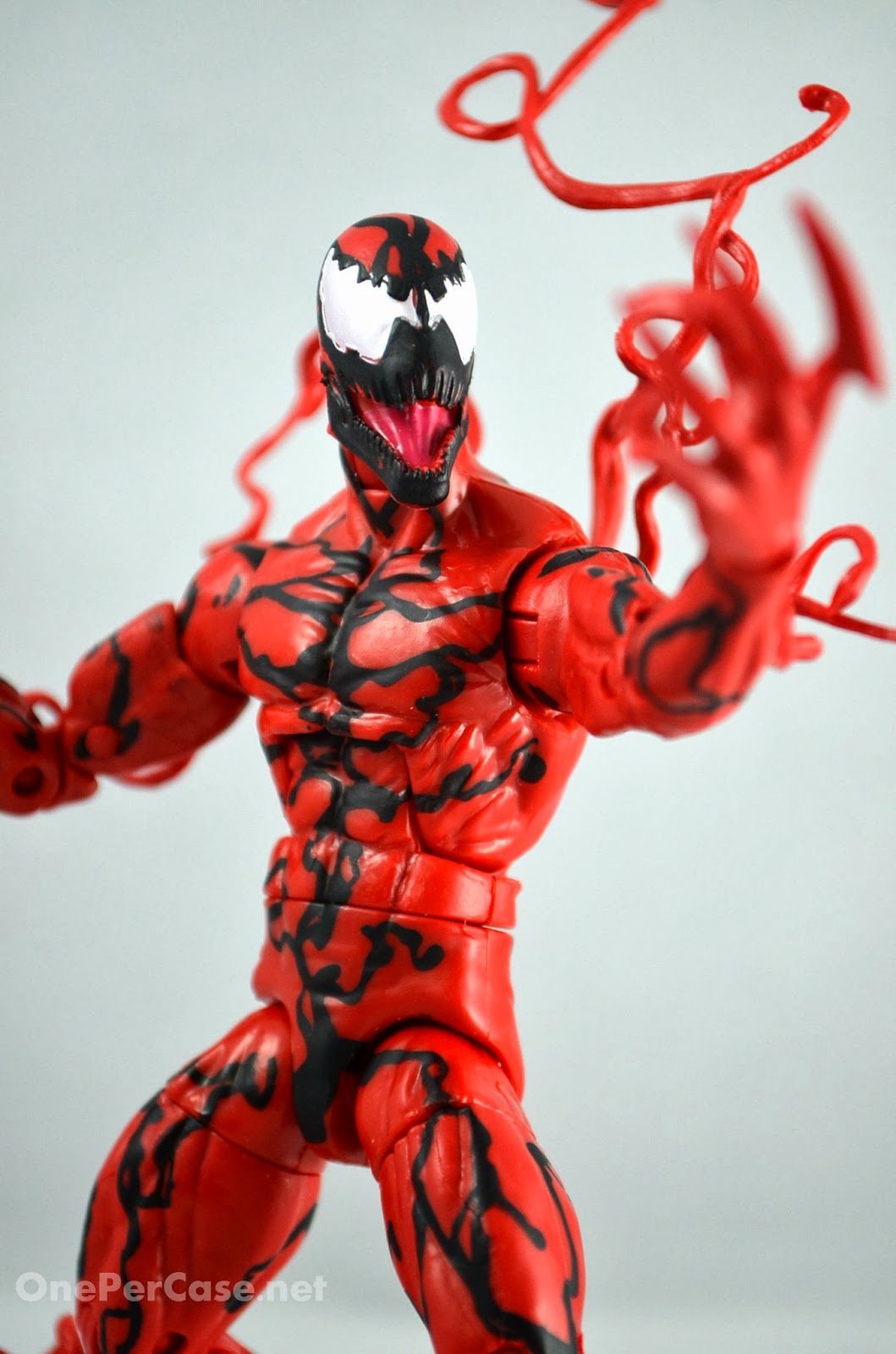 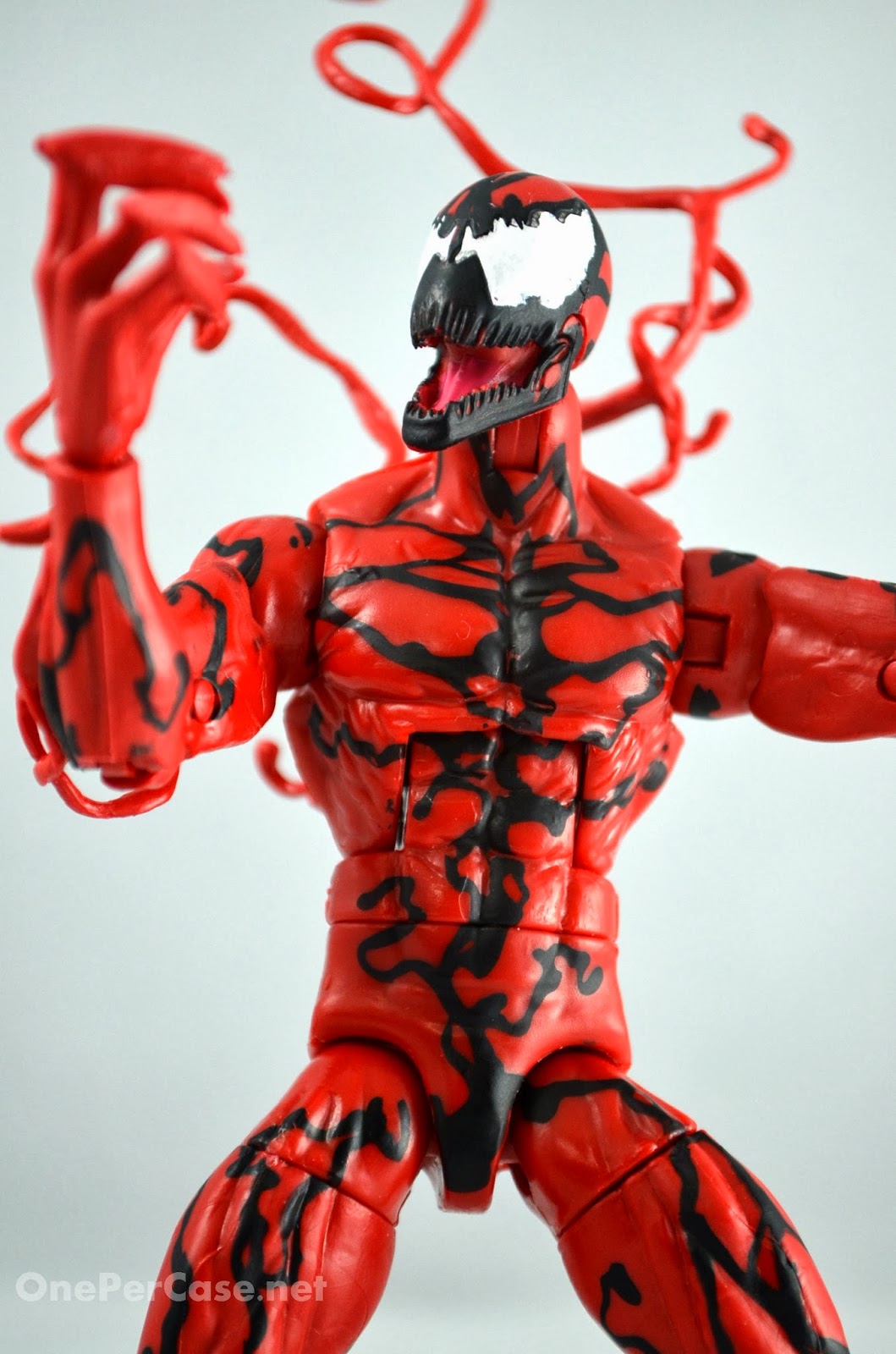 I didn't think I'd be as excited about this figure as I wound up being.  After all, we've already had a couple of Carnage figures in the 6" scale lines over the years.  But oh man, this puts the previous versions to shame.  It's just plain slick.  He uses the Bucky Cap/Archangel/US Agent/etc body, which yes, we've seen multiple times now, but it just doesn't get old.  It's probably the best body sculpt Hasbro has ever done.  And strangely, it really works for Carnage.  Hasbro added some rubbery symbiote tendril thingies, which really give a lot of Carnage-y character to the figure, along with a brand new head and clawed hands.  And I love this head sculpt.  It's a spot-on representation of the character, and I especially like the sculpted open mouth. 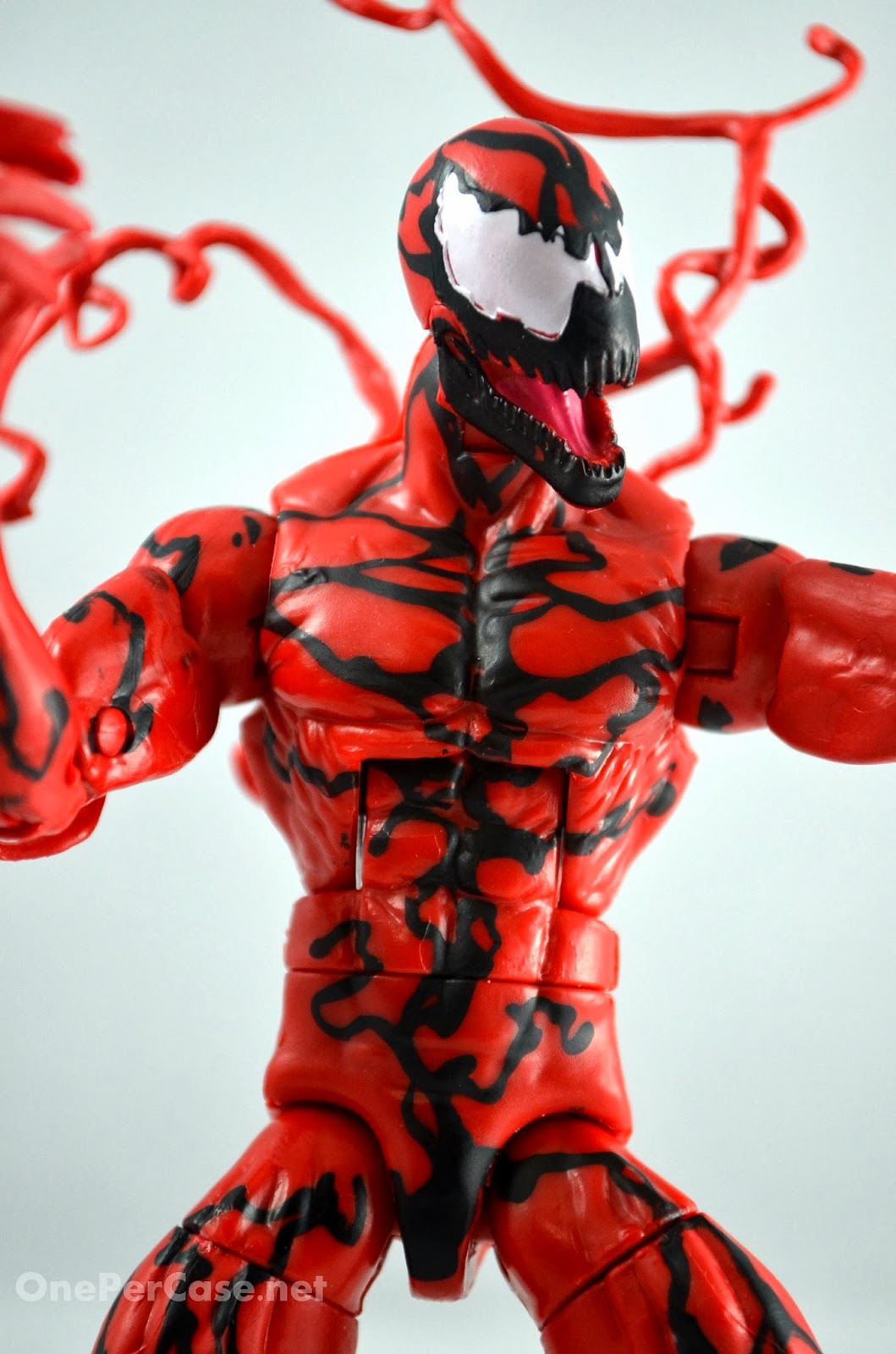 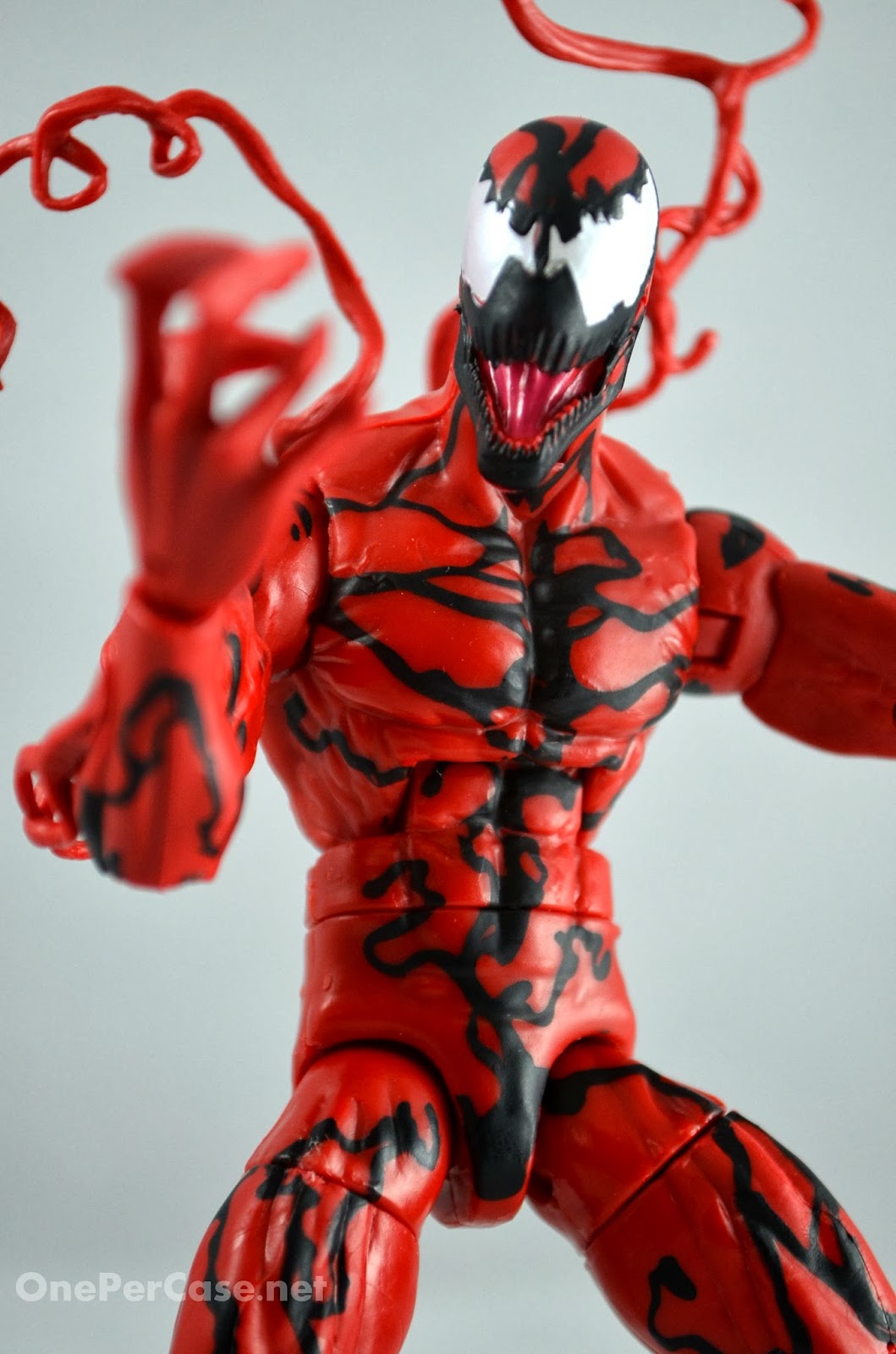 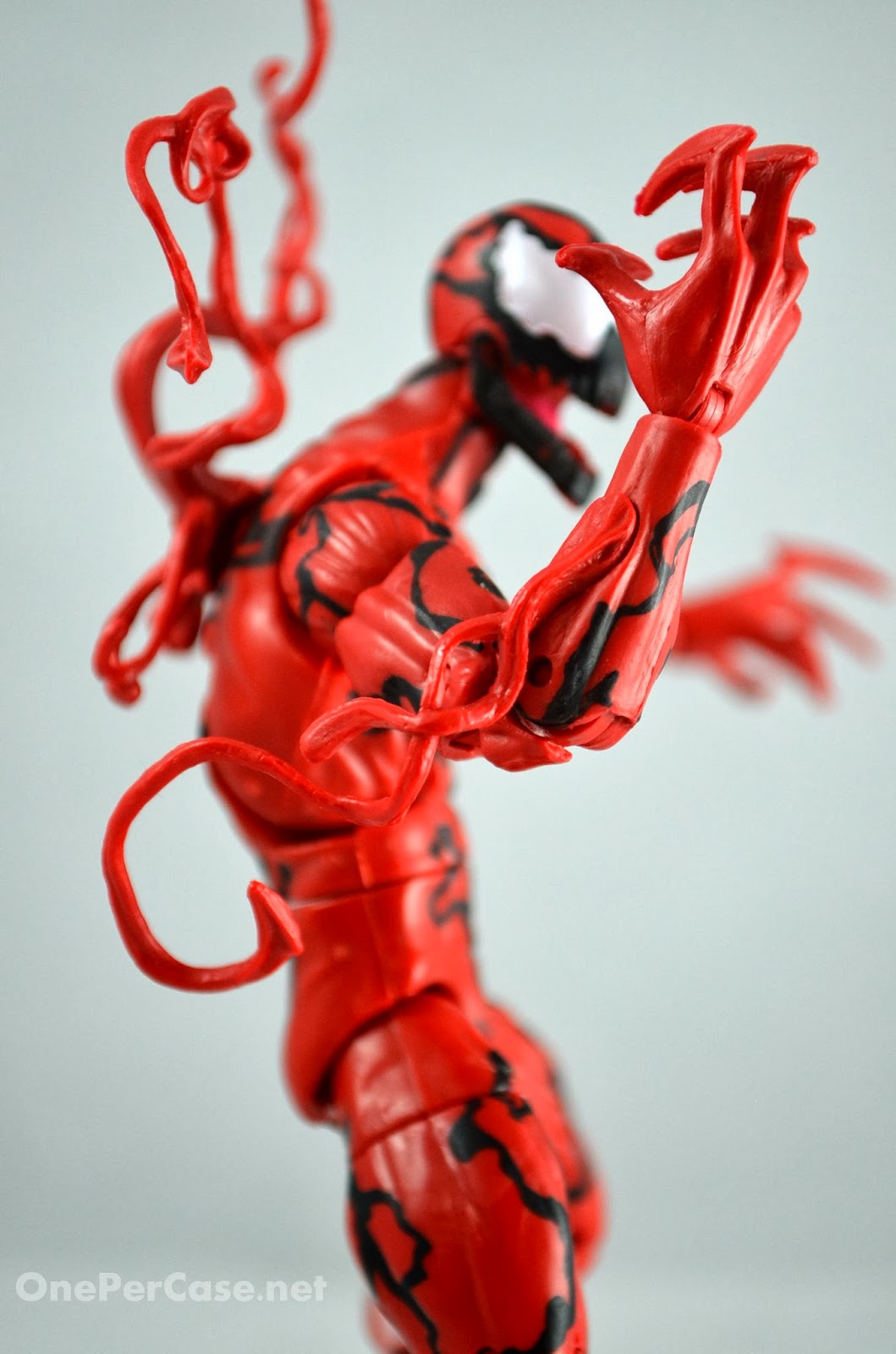 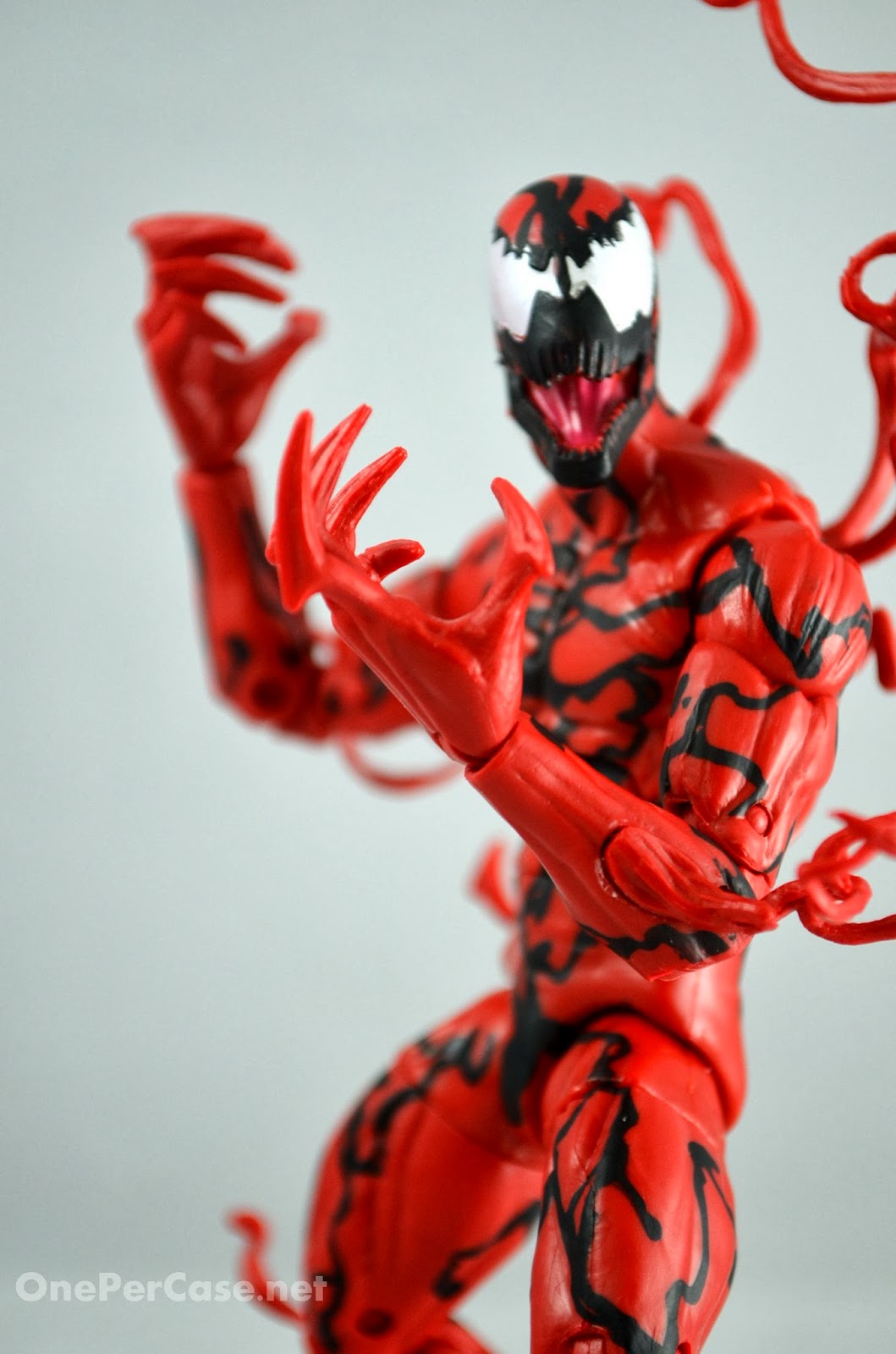 The paint job is simplistic, but pretty much perfect.  The entire figure is cast in red plastic, with the black squiggly parts painted on, and the eyes and mouth painted.  There is some very minor sloppiness around the edges of the eyes on all the samples I've seen, but it's barely noticeable, and doesn't bother me, since by his very nature, Carnage is a messy looking dude.  Regardless, all of the black squiggles are nice and crisp.  On past Carnage figures, the sculpt was overly complicated with the squiggles sculpted on, and I never thought it looked quite right.  This take is definitely a simpler, lower effort approach, but it works. 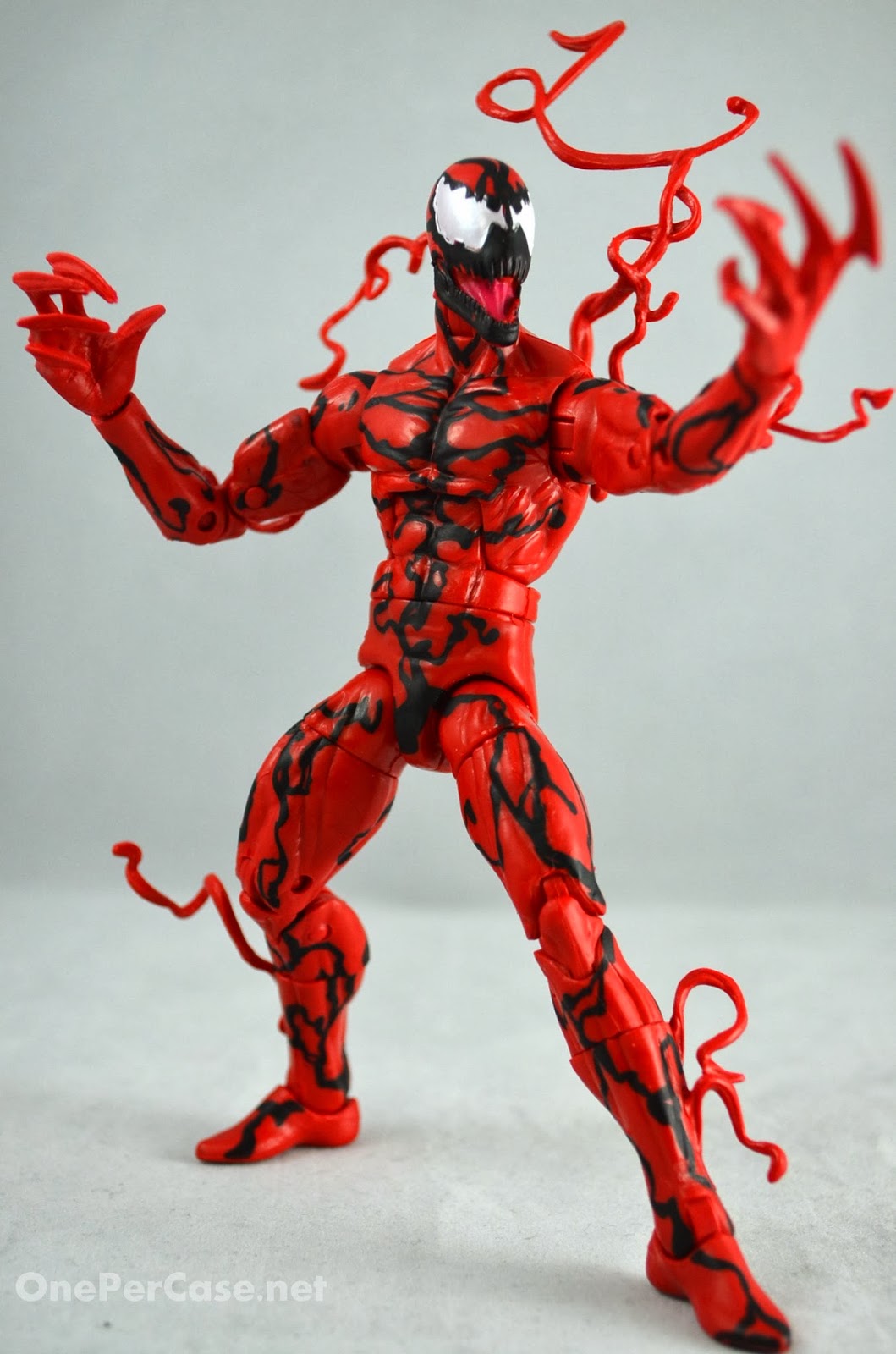 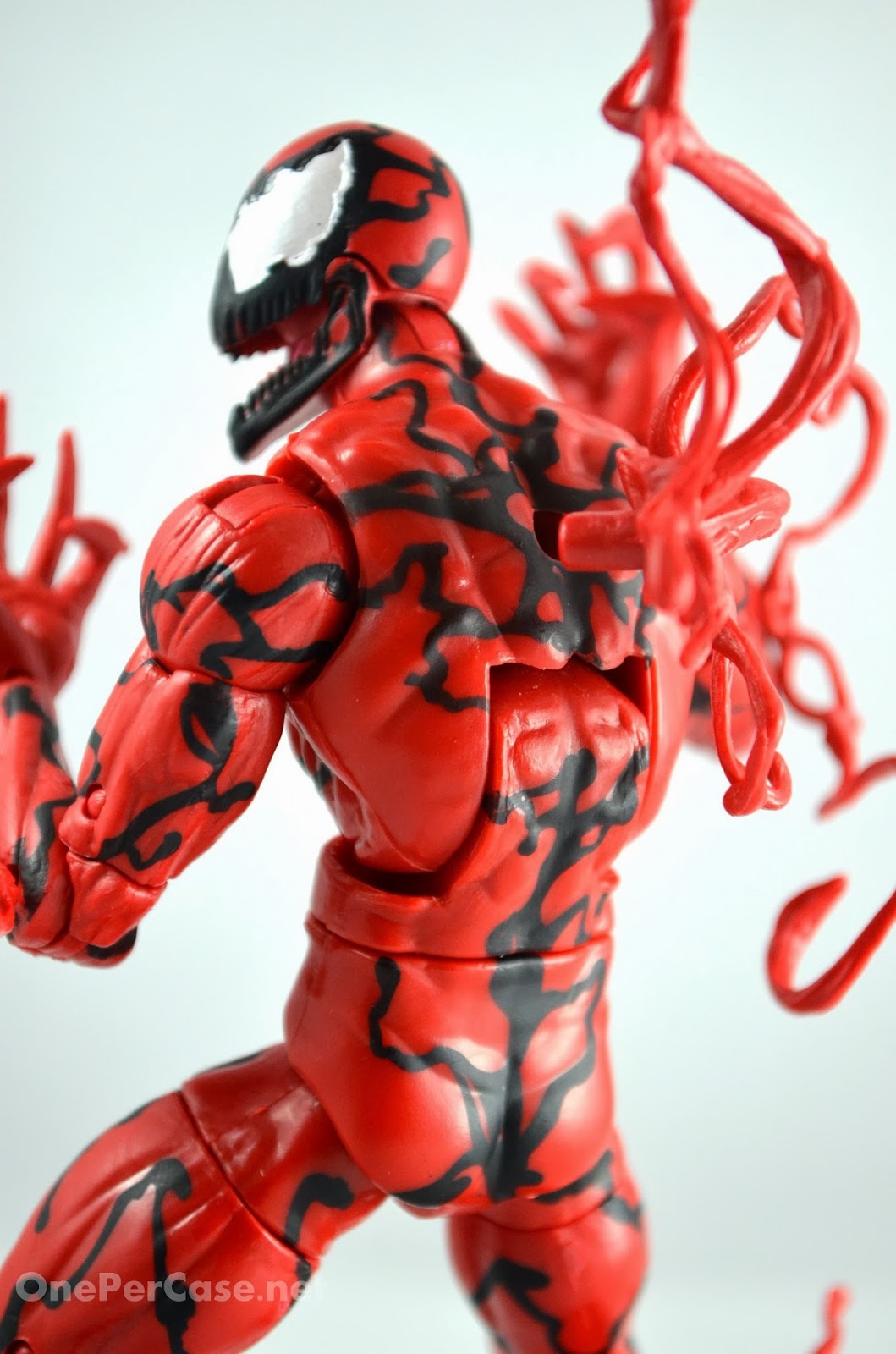 If you've collected Marvel Legends at all over the past two years, you've seen this guy's articulation by now.  It's nothing new, but it's still fantastic, and a character like Carnage really benefits from all the poseability.  Carnage can hit just about any menacing, murderous pose you could want, and he looks damn good doing it. 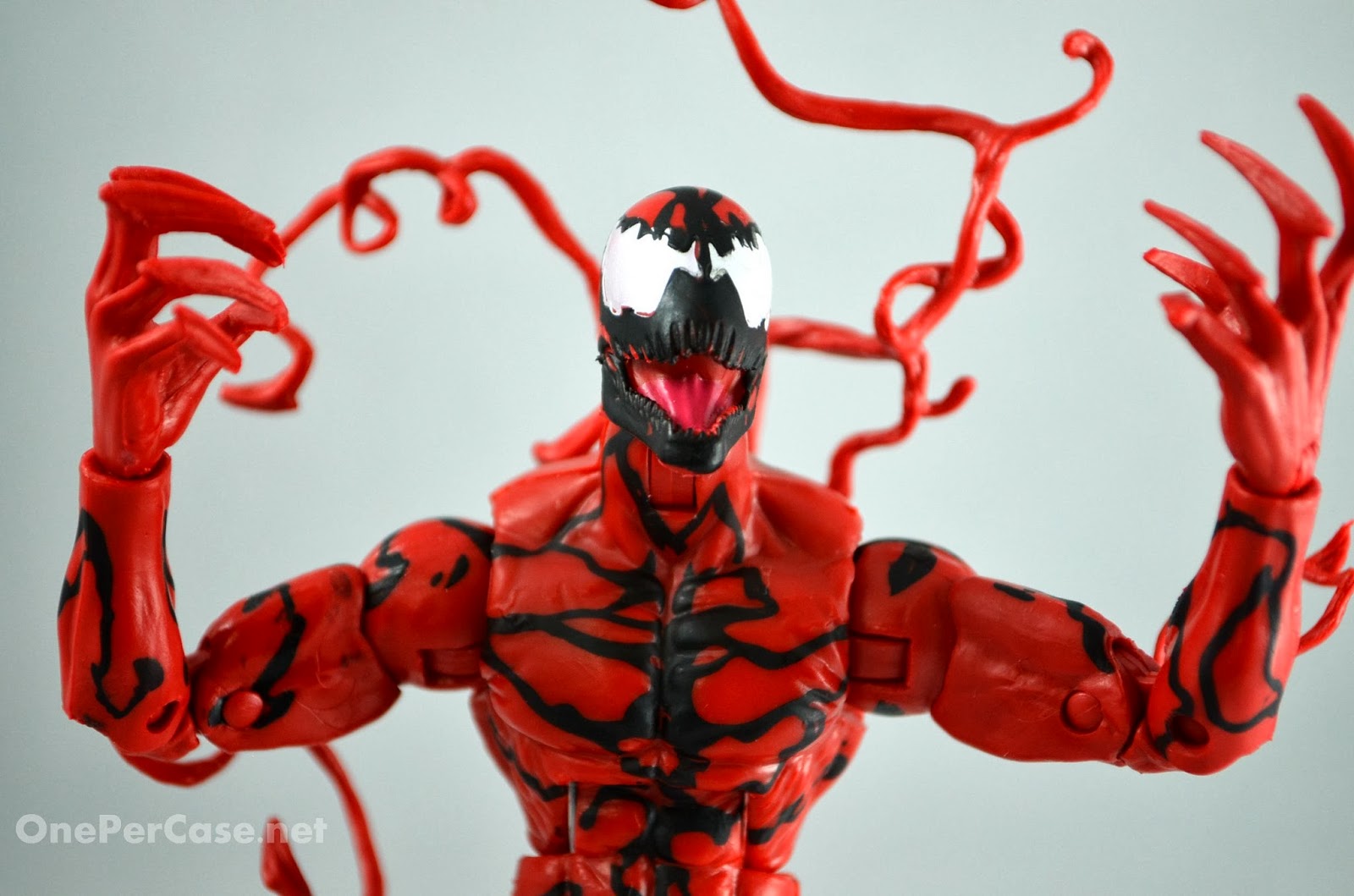 Other than the Green Goblin BAF head (which we'll look at in a later review) and the tendril-thingy that plugs into his back, Carnage doesn't include any accessories.  Not a big deal, but some swap-out hands in the shape of different blades/weapons and an alternate Cletus Kasady head would have been really cool.  Maybe that's just me reminiscing about my 5" ToyBiz Carnage figure when I was a kid, though. 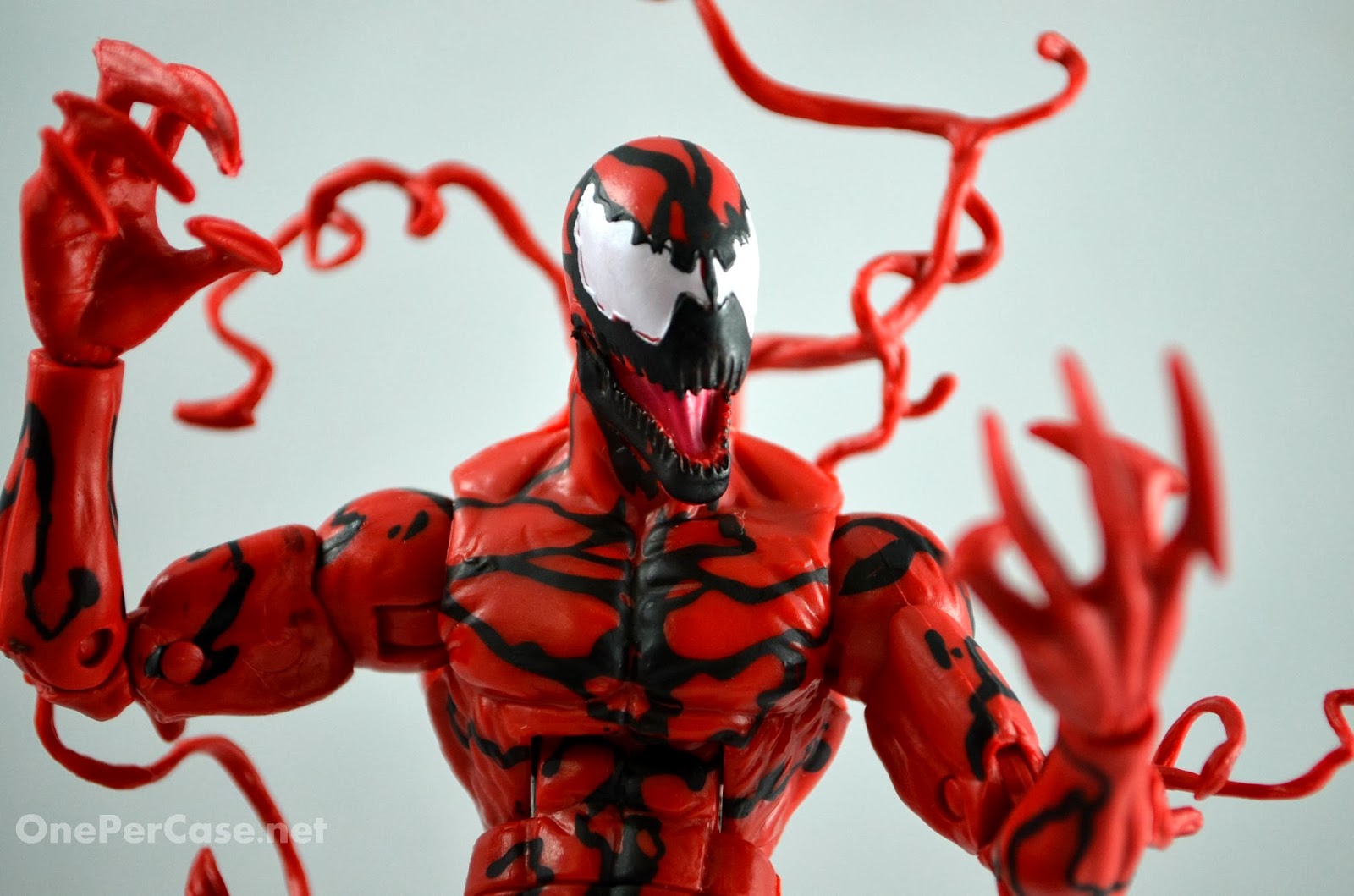 Here's a comparison with the older ToyBiz Spider-Man Classics Carnage (Left) and the later retooled Hasbro Spider-Man line Carnage (Right).  Those had a lot of sculpting detail, and some huge articulated claws, but this new version blows them away in terms of character likeness. 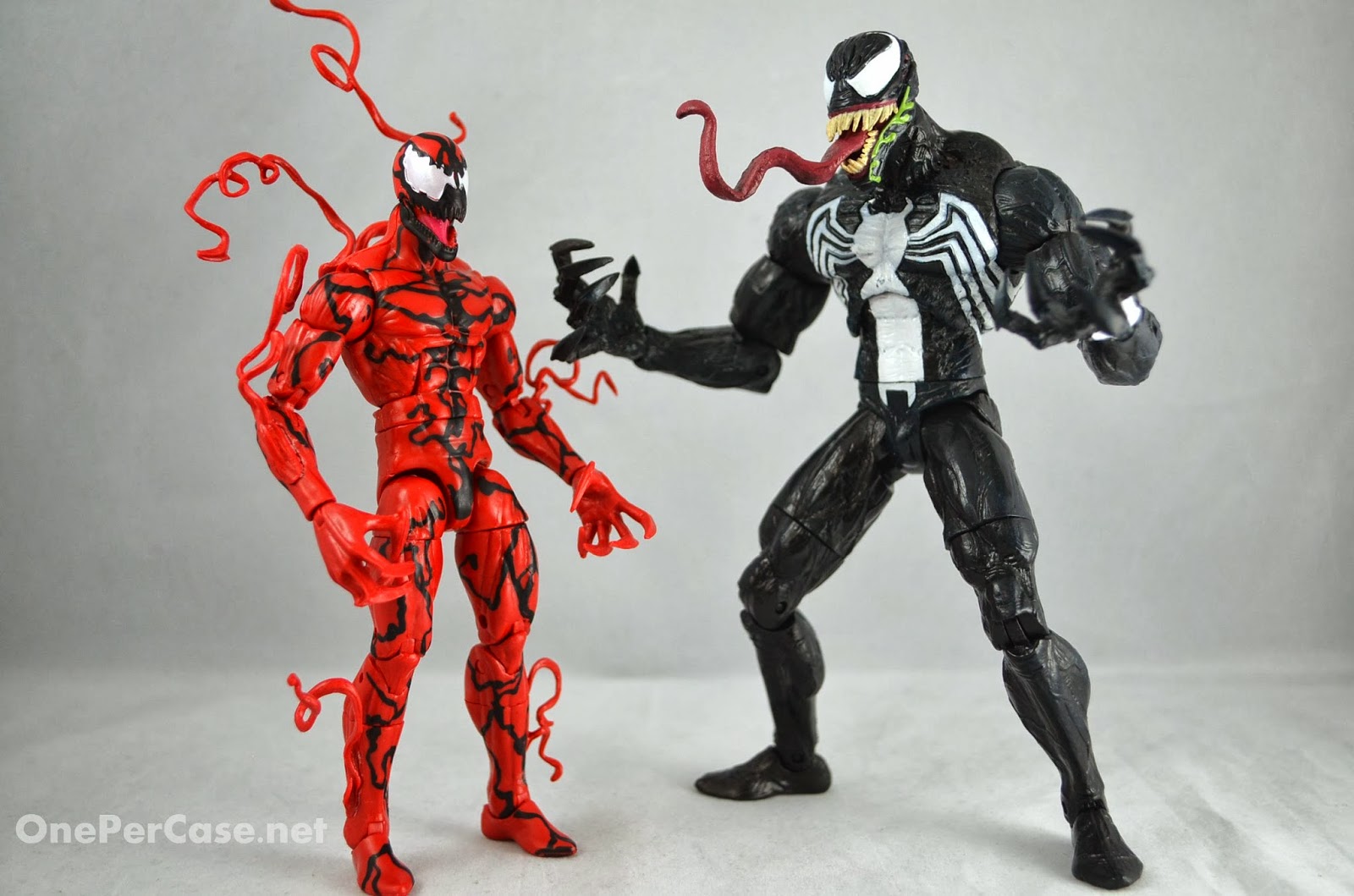 And here's a comparison with last year's Marvel Select Eddie Brock Venom and the Spider-Man Classics "McFarlane" Spidey.  I feel like I finally have near-perfect representations of the Maximum Carnage main cast. 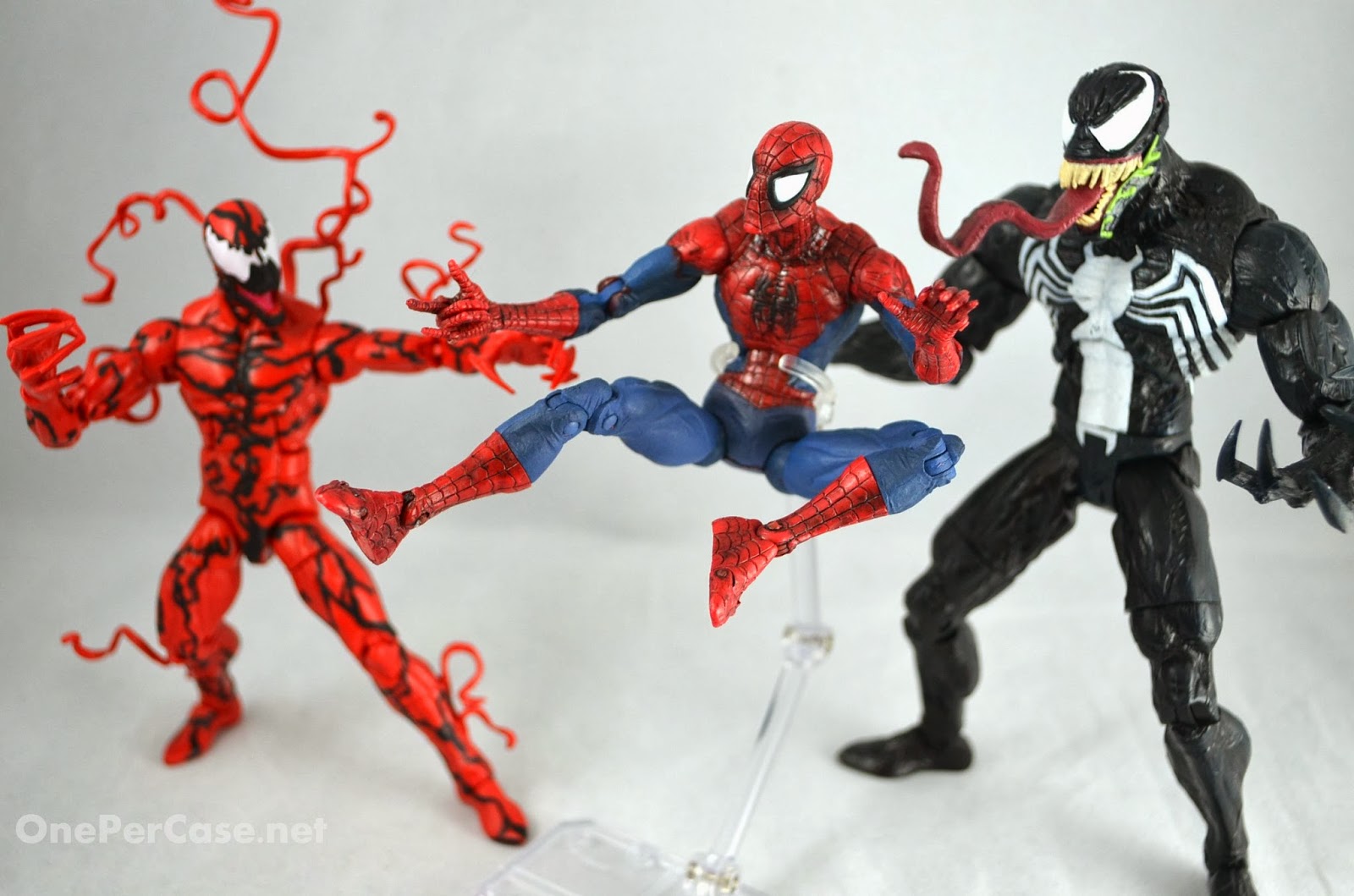 If you're a Spider-Man fan, you'll undoubtedly want to get your hands on this figure, but with him being one per case, and definitely one of the two most sought-after figures in the wave, plus the fact that he won't be in the next assortment, you might have to put out some extra effort to find this guy at retail.  He is absolutely worth it, though.  Some figures suck, and some figures are great, and then there are some that you just can't put down.  Carnage definitely falls in that latter category for me.  If you want to just order a case or set of this wave and be done, BBTS now has this series in stock.  And if you haven't noticed, Wave 2 (with the swap figures) also went up for pre-order today.

-Maximum words and photos by Zak.  And packaged pics by Jason (I was too impatient and tore mine open before photographing the package).
Posted by Zak Sousa at 8:00 AM