I really thought the Hydra soldier would be my favorite of the two army builders in this wave, but now I'm not so sure.  The A.I.M. bee-keeper scientist is 150% freaking rad. 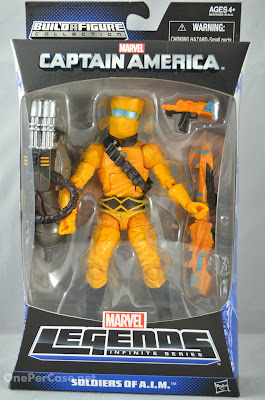 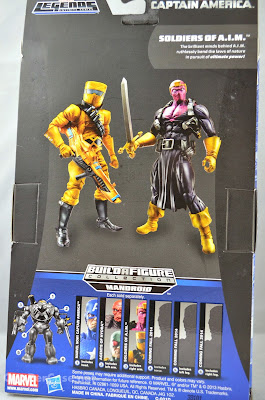 The bee-keepers packaging is completely identical to Baron Zemo's.  I like it.  I hope all Marvel Legends come in this packaging style from now on. 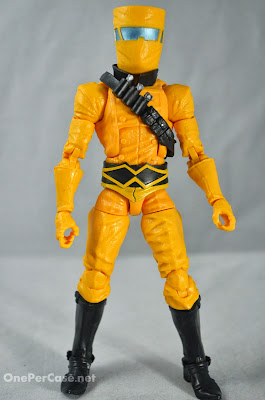 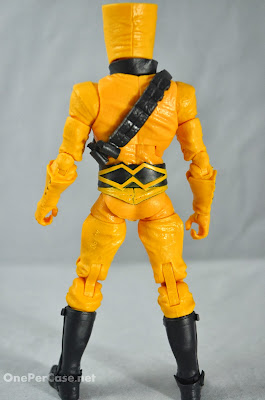 The A.I.M. Soldier is a 100% completely new, completely kick-ass sculpt.  We first got to drool over it at SDCC during Hasbro's Marvel panel, where Starlord was also announced and shown in an early 3-D render, since he will (wisely) share a body with this figure, just as was the case in the Marvel Universe line.  But seeing the figure in person now at last, it's even more impressive.  The sculpt of the uniform/jumpsuit has some very realistic looking folds and wrinkles sculpted in, the boots and gloves have a smooth appearance to contrast the "fabric" texture, and the visor on the big giant bee-keeper hat has a mesh texture sculpted in.  Tons of detail.  I love this entire sculpt. 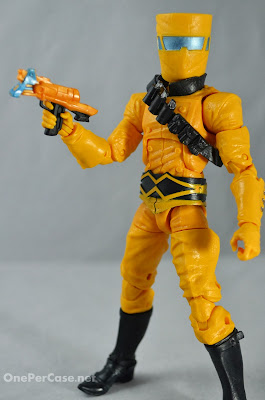 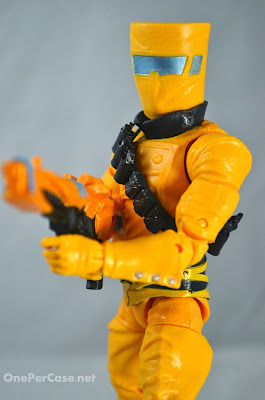 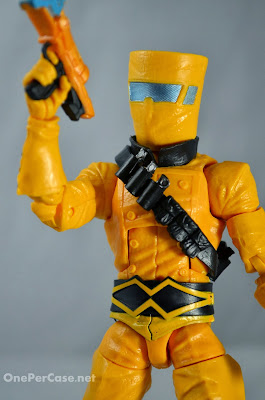 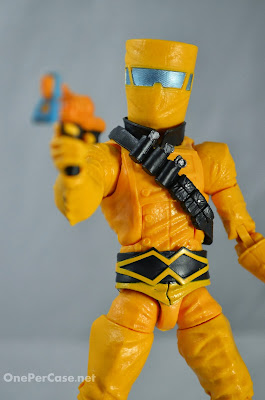 Being a completely new body, this figure is loaded with articulation as well.  Ball-socket head, ab-crunch, waist-swivel, ball-hinged shoulders and wrists, bicep swivel, double-hinged elbows, ball-hinged hips with thigh swivels, double hinged knees, and ball-hinged/rocker ankles.  That all allows for more poses than your average mad scientist needs to hit. 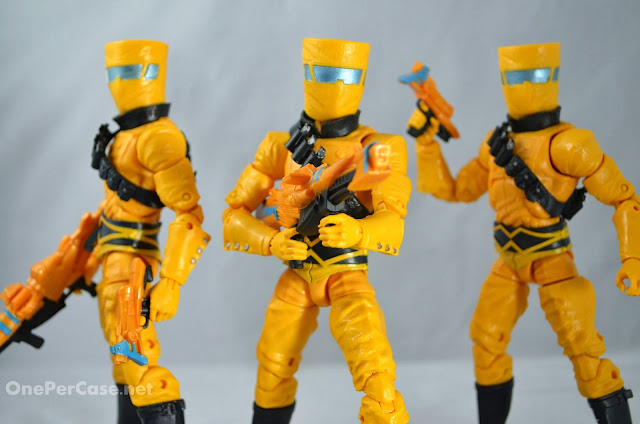 The paint on the three AIM Soldiers I picked up is pretty solid, but one of them does have some silver smeared down the side of his mask from the visor.  Most of the figure is cast in yellow plastic, so that's difficult to mess up.  The smaller details like the visor, silver buttons on the gloves, bandoleer and grenades, and the belt are painted.  Just beware of minor smudging in these areas. 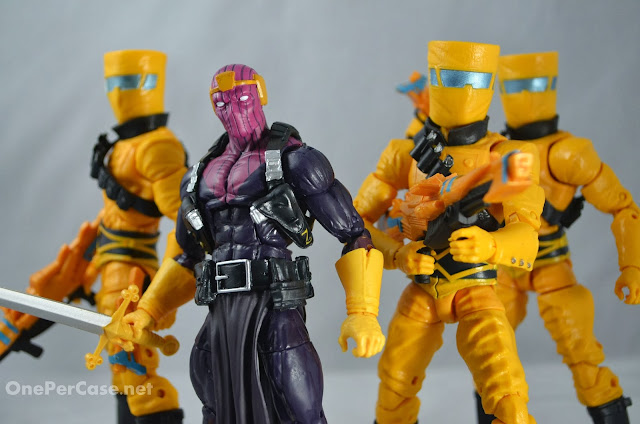 Like the Hydra goon, the AIM scientist also includes two newly sculpted guns, both of which look sufficiently science-fiction-y.  And these guns also include some paint apps to make them more detailed.  Both guns look good, like something AIM would actually build, and can be easily held in both or either hand.  Part of the fun of this figure will be in imaging what kind of crazy-mad-scientist, invisible-laser-turns-blood-into-gasoline sciencey weapons these guys invent.  On top of the crazy looking guns, this guy also includes his aforementioned bandoleer/grenade belt, and the same right arm for the Mandroid BAF that comes with Baron Zemo. 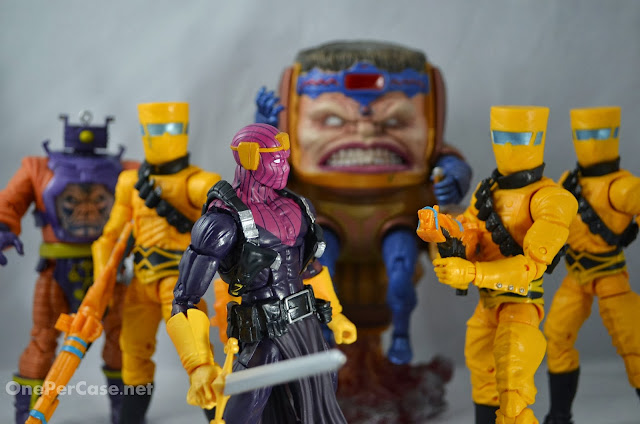 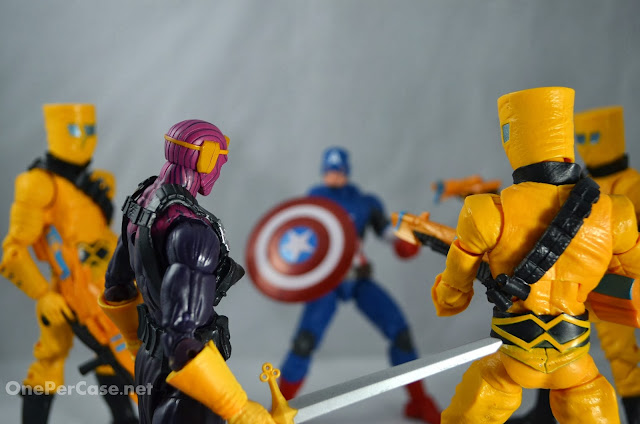 Overall, I'm incredibly pleased with this figure, even more-so than I expected to be.  I'll probably buy at least a dozen of these guys just like I will with the Hydra soldiers.  These are seriously the two best army builders we've gotten in this line in, well, ever.  Good luck grabbing as many of this guy as you want, because a lot of us will be scooping up all of them that we can on first sight.  None of the online stores have individual listings for him right now either.  This wave is just starting to hit Targets, or you can order a case from BBTS, which will include exactly one AIM bee-keeper.  But really Hasbro, you could also do a solid case pack of this figure and put it up on HTS and they would all sell.  I would buy, like, so many.  Totesies. 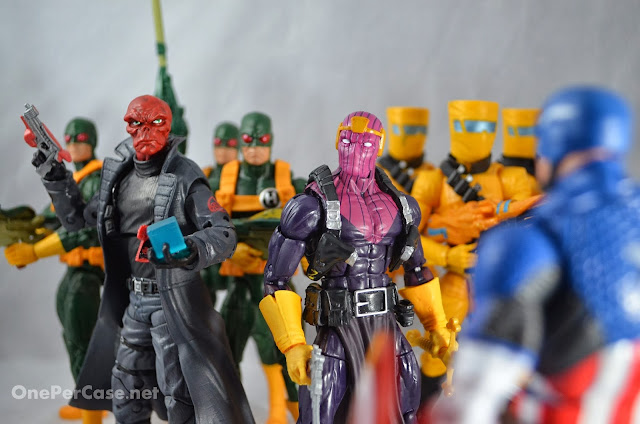 Words, photos, and a soon to be VERY empty wallet by Zak.
Posted by Zak Sousa at 6:14 PM