Hey look, I'm catching up on some Marvel Legends reviews.  I raided a few local Targets the other day as soon as the DPCI number for this line was shared on the internets, and liberated a few cases worth.  First up is the line's namesake, Cap's newest costume in the NOW! comics. 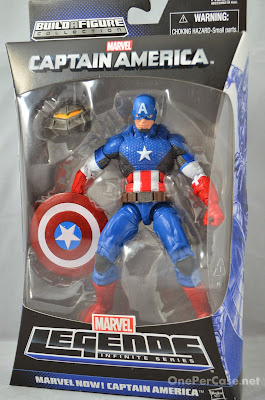 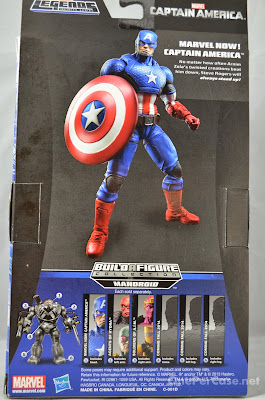 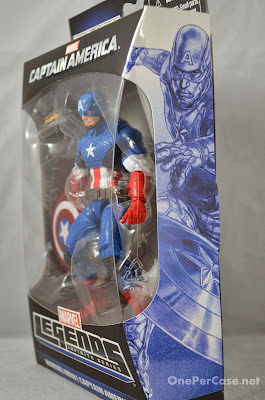 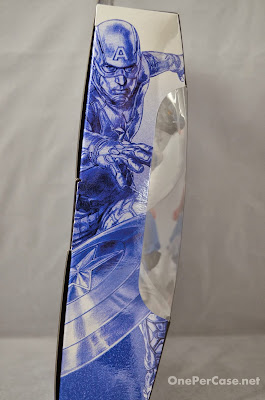 Hasbro has stepped up their game with the new packaging for this "Marvel Legends Infinite Series".  Gone are the blisters and card backs.  Now we get an enclosed window box similar in style to my other favorite 6" Hasbro line, the Star Wars Black Series.  The design and art on the box looks great.  I think I prefer this over the typical bubble/card that we've had for so long.  This design is more compact, which will make for easy storage for MOC/MIB collectors, though the convex front of the box does make stacking a little difficult.  Also of note:  There is absolutely no tape or glue used to seal the boxes, just "insert tab A into slot B" cardboard flaps.  This will make swapping/resealing figures much easier for nefarious douchebags.  So keep your guard up when finding these on the shelf. 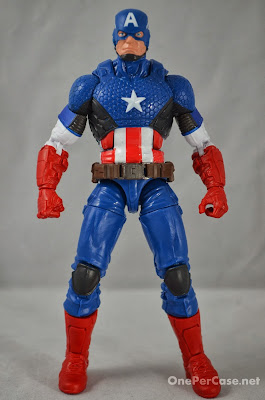 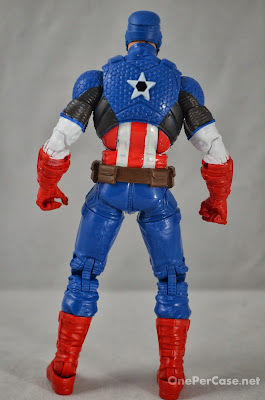 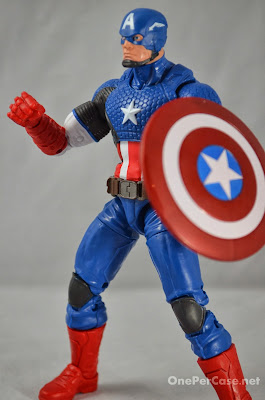 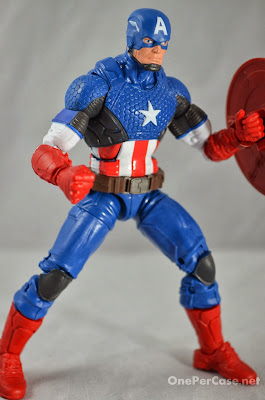 This version of Captain America is an entirely new mold, modeled after one of the many different interpretations of his new (read: movie inspired) costume from the comics.  Every artist seams to draw this costume differently, but this sculpt is a fair representation of the suit, and Hasbro included plenty of detail, from the hexagonal armor plates on the torso and shoulders, to the straps and panels on the gauntlets, boots, and helmet.  I got to photograph the prototype of this figure that Hasbro had on display at SDCC this year, but the final production piece is even more impressive in hand. 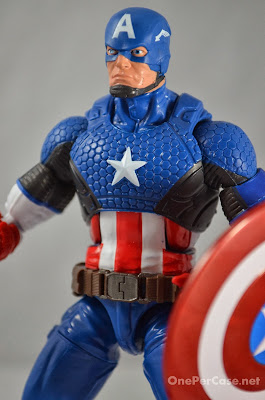 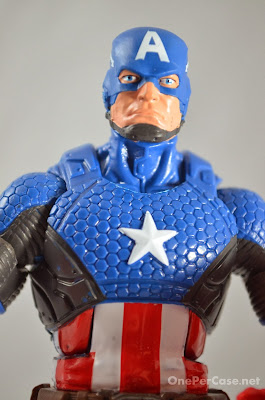 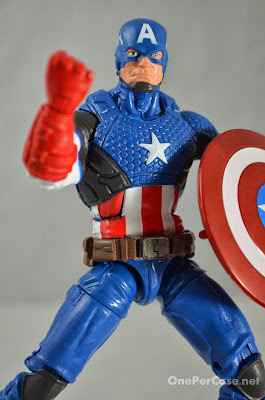 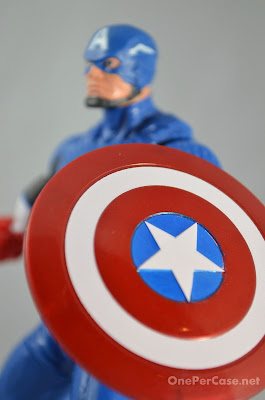 Cap includes the full range or articulation that the "Infinite Series" name implies, including a ball-socket head, hinged neck, ball-hinged shoulders and wrists, swivels at the biceps, ab-crunch, swivel waist, ball-hinged hips, swivel thighs and calves, double-hinged elbows and knees, and the coveted ankle-rockers.  All the joints function well with the exception of the upper elbow hinge.  The sculpt just doesn't allow much range of motion here, so that joint is almost worthless.  Luckily the lower half of the hinge has plenty of movement, so Cap's elbows are still pretty nicely functional. 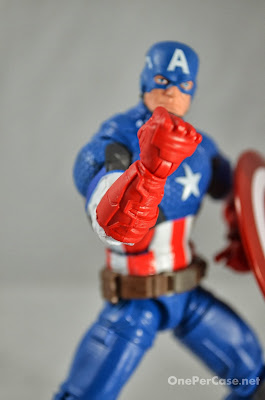 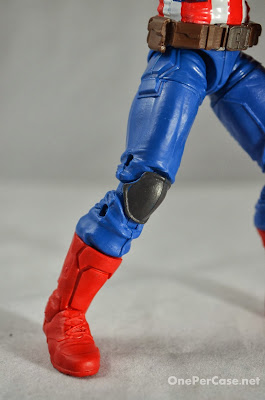 Out of the 6 of this figure that I saw on my quest, all but this one had some pretty noticeable paint issues, ranging from derpy eyes, to sloppy red and white paint on the torso, and off-center A's on the helmets.  Even this one isn't perfect, but it's the best I could find.  This seems to be a growing trend with Hasbro lately, so beware of shoddy paint apps when buying this line (all the figures had some sort of issue, but I'll get to those in future reviews).  Other than the slop, the paint is decent.  Though the hexagonal armor is just begging for a darker colored wash to bring out the detail.  Some customizers will have fun with this figure. 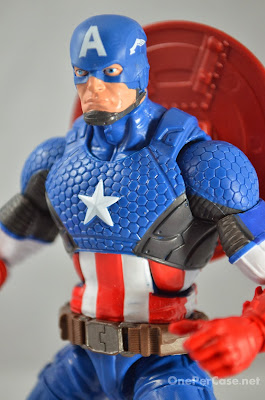 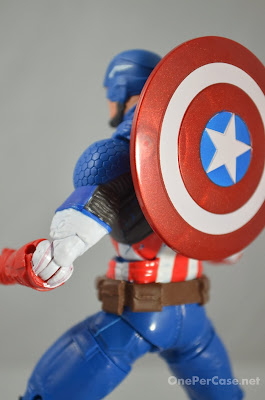 Cap includes two accessories:  His ubiquitous shield, which is a repaint of the one we've been seeing since the relaunch of the Legends line, and the head piece for the Build-a-Figure Mandroid.  The shield plugs into Cap's back.  The head will plug into the torso that we get with a future figure.  Put it in a box and save it for later. 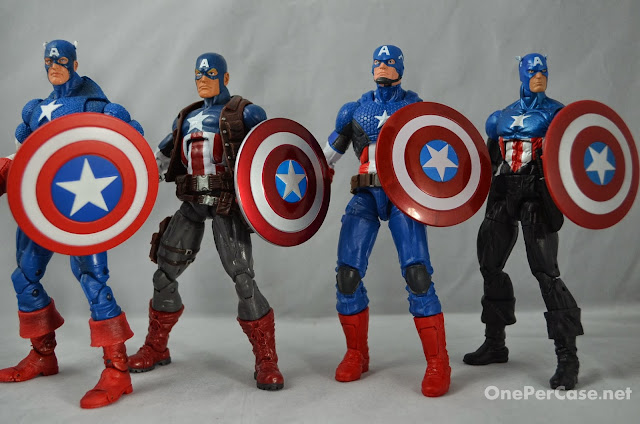 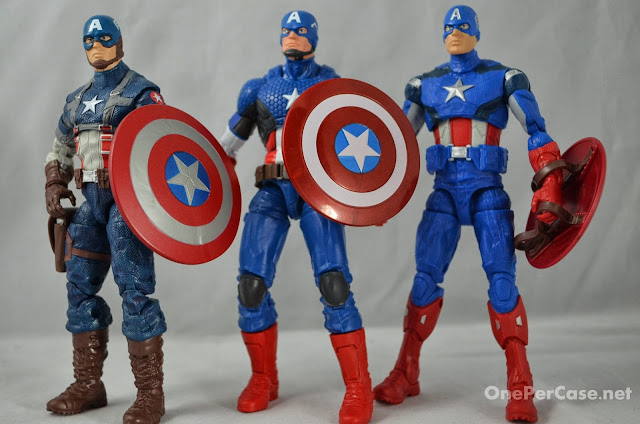 Here are some comparison shots of Cap with other figure incarnations throughout the years.  He's a great addition to the line and really helps to make the character feel like he has stepped into the modern age, both from a costume perspective, and a figure design/construction perspective.  Luckily, despite BBTS saying that Hasbro's new MSRP for these figures is $19.99, Target has them priced at $14.99.  Hopefully that price sticks around for a while.  He's packed two-per-case in the Wave 1 assortment, so he won't be hard to find once these hit en masse, but he is available individually or in the case from BBTS.  Now if we could just get that Marvel NOW! Thor shown at SDCC and maybe a black and gold Iron Man.... 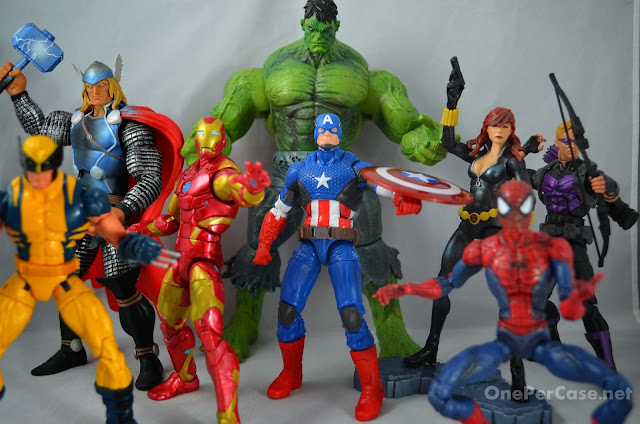