Another one of the figures I was most looking forward to from this series and the year, but also somewhat a frustrating sore spot now that we know the Bulldozer running change likely won't be making it out any time soon.  Still, I supposed a 3/4 complete Wrecking Crew is better than no Wrecking Crew.  Check out "Marvel's Wrecking Crew", better known as The Wrecker, after the jump. 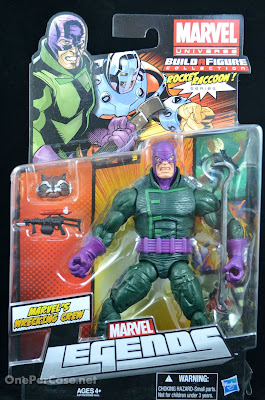 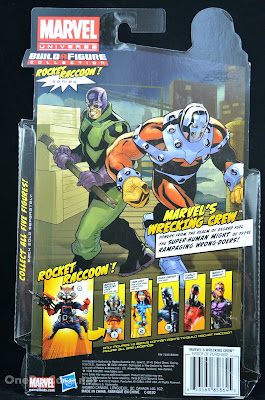 It's great that the packaging shows both The Wrecker and Bulldozer.  And by "great", I mean "salt in an open wound" great.  Seriously, the art on the card back looks good, but It does nothing to quell the need for a Bulldozer figure to finish off our crew.  And because this was originally intended to be shared packaging between both characters, we get the goofy non-name on the package identifying this character as simply "Marvel's Wrecking Crew".  In case you were confused and thought it might be "DC's Wrecking Crew" in the Marvel Legends line. 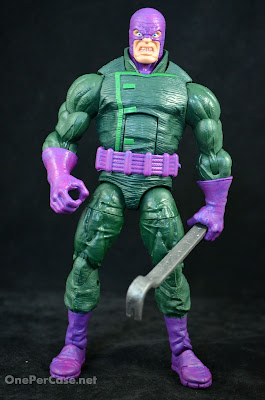 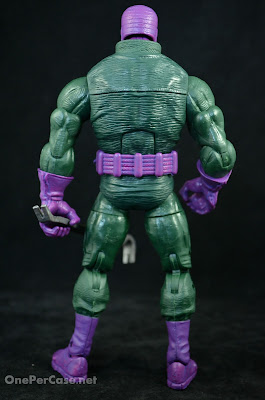 The figure is another example of Hasbro using a few new parts mixed with an existing body, but it works perfectly well here.  Wrecker uses the same arms and legs as the rest of the Crew (Thunderball and Pile Driver), with a new torso and head.  The new parts blend pretty seamlessly with the old to give us a cohesive figure that is an outstanding representation of the character.  Some people may complain about the gargantuan size of the figure, but it's an accurate representation of his size in more recent comics.  And I kind of like when the big guys are just a little larger than life. 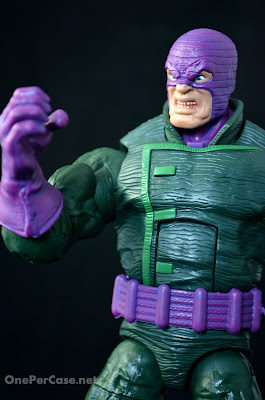 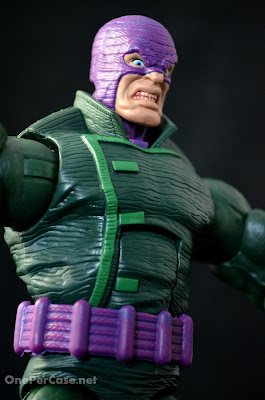 The sculpt is fantastic  The head emotes a ton of classic Dirk Garthwaite character.  He looks big, mean, and pissed off.  The ribbed texture in the mask is great.  The lined texture from the jacket torso doesn't really carry over into the re-used arms, but it doesn't look out of place.  The sculpted detail is in the places that count, and it looks awesome. 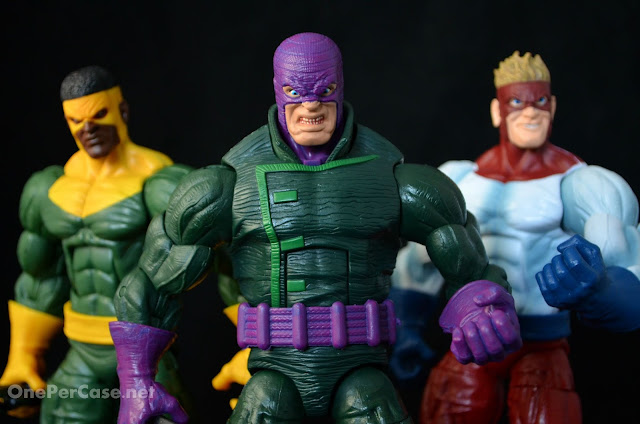 Articulation is identical to the previous Wrecking Crew figures.  He includes a ball jointed head, hinged neck, ab-crunch, waist swivel, ball-hinged shoulders and hips, single hinged elbows and ankles (with the older style, "barely moving" rockers), double hinged knees, swivels at the bicep, forearm and thigh, and hinged toes.  Not as great as the more recent bodies, but still plenty functional, and Wrecker can hit all the poses he needs to, which basically include "stand there looking big and intimidating, with crow bar in a variety of threatening positions". 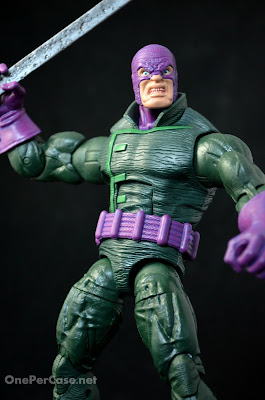 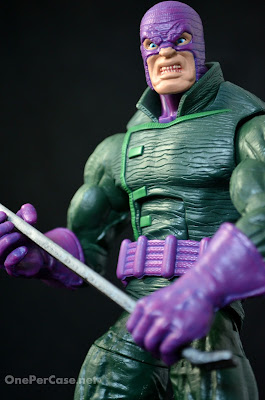 The paint is also top-notch on this figure.  There is some great shading in all of the purple areas that really make those parts stand out.  The dark green looks great contrasted with the purple, and the light green of the jacket trim is a nice highlight on an otherwise mostly dark figure.  The face is also painted superbly, and really brings out the character of the sculpt.  The eyes and mouth convey complete contempt.  And everything is perfectly applied on my sample.  Not a single complaint. 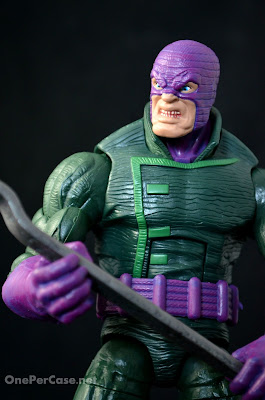 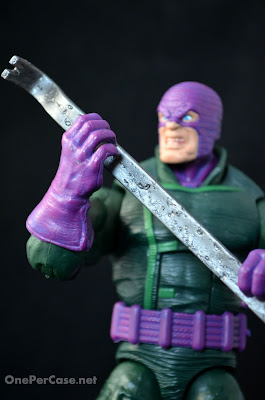 The Wrecker includes Rocket Raccoon's head and gun, as well as his signature weapon, his Asgardian-enchanted crowbar.  Because nothing says "Viking weapon of doom" like a tool you'd use to steal a car with.  The texture on the crowbar is pretty cool, too.  Hasbro could have gotten away with a smooth surface, but the pitted texture adds more character to an already character-filled figure. 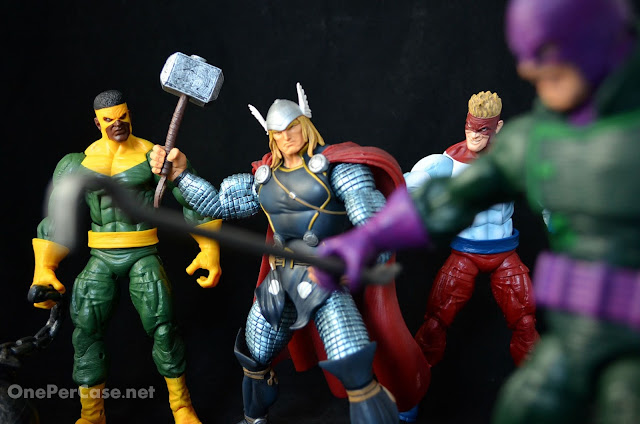 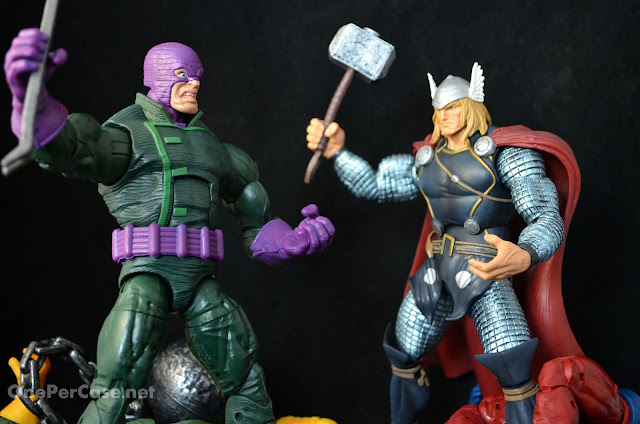 If you bought the previous Arnim Zola series Wrecking Crew figures, or if you just enjoy classic and somewhat "WTF" villains, you definitely need to pick this guy up.  He was one of the many figures from this wave that I eagerly anticipated when it was announced, but I'm even more pleased with him in hand.  He's a terrific addition to the line.  He's currently out of stock on BBTS, but is available from various sellers on Amazon.  So far this wave has not hit retail in wide release, and I don't suggest holding out hope for it.  Get it online while you can.  Now give us Bulldozer, Hasbro! 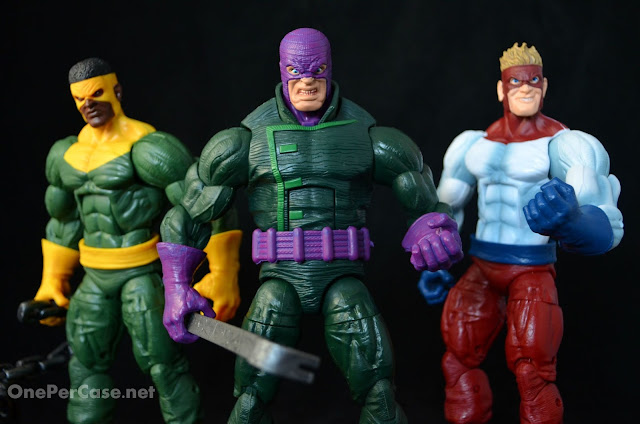 -Words, photos, and trying to avoid making jokes about the name "Dirk" and his ability to wreck you by Zak.
Posted by Zak Sousa at 5:10 PM