So you've bought a whole new wave of awesome Marvel Legends figures.  What do you have to show for it?  Four awesome figures (and a mediocre one), plus a bonus build-a-figure of a heavily armed, tactically brilliant, slightly violent, sentient raccoon.  Take a look at this galactic guardian after the jump. 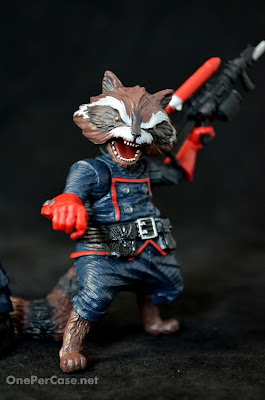 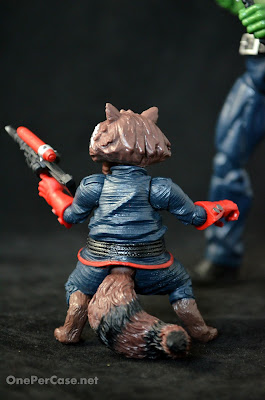 Rocket Raccoon is the second "mini BAF" of the year, but unfortunately, he didn't get quite the same level of engineering that Hit Monkey did.  From the waste down, he's basically a statue.  No leg articulation at all.  Despite this, Rocket is still a pretty awesome little figure. 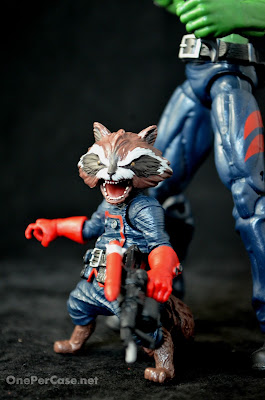 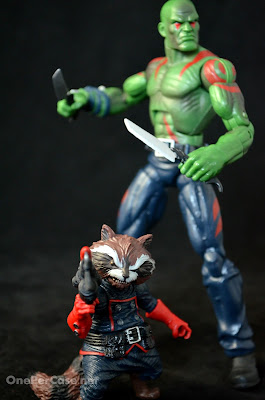 The sculpt has a lot of nice detail, including ribbing throughout his uniform, buttons and chest flap seam, and some nice fur detail in the head and tail.  And the face has some great character expression, due in part to great sculpting, and also due to the articulated jaw that gives you a little variety in displaying the figure with his mouth open yelling, or teeth gritted.  I'm not positive, but I believe this figure shares a digital sculpt with the smaller Marvel Universe version.  The folds in the fabric are all in the same places, but this version has much more texture and detail. 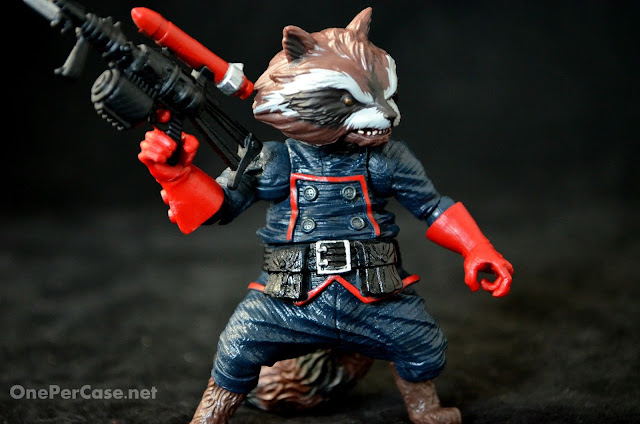 The legs are lacking movement, but the rest of the figure has some nice points of articulation.  The arms have some great poseability, thanks to ball-hinged joints and the shoulders and elbows, plus swivels at the forearm.  The head is on a ball joint, as is the tail, which acts as a tripod with the legs to allow the figure to stand stably, despite his tiny raccoon feet.  So while he doesn't have the most articulation, for a figure of his size, he's not terrible.  Sure, articulated legs would make him that much better, but lets face it, nobody needs to pose him sitting down or anything. 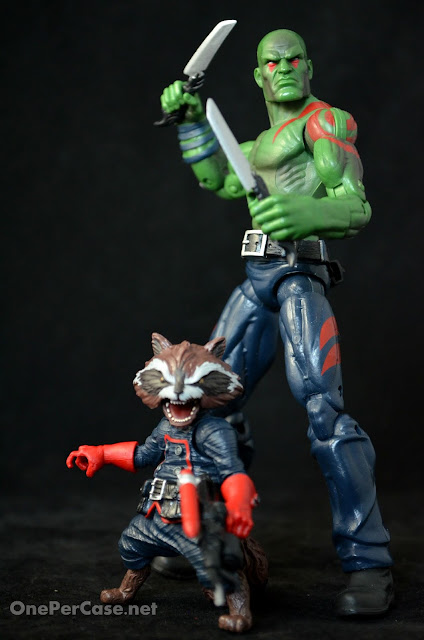 Rocket's one and only accessory is his gun, which is equipped with a bayonet and a rocket on top.  It's a nice weapon and an entirely new sculpt on it's own (or at least a scaled-up version of the gun from the MU figure), but not quite as big and intimidating as I'd have liked.  Something just a little bigger would have helped with the awesome and slightly ridiculous notion of a raccoon armed with heavy weapons. 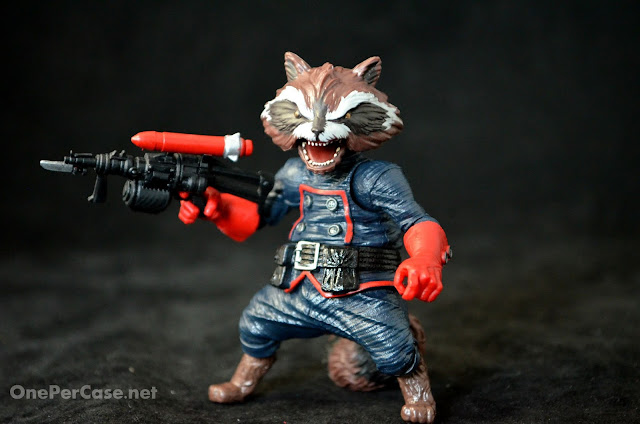 The smaller scale BAFs may seem like a bit of a cop-out on Hasbro's part, and in a way, they may be... after all, something this small would have likely just been a pack-in with another figure once upon a time... but if it helps Hasbro justify costs in other categories for this line, I'm all for it.  I'm just a little surprised we got this figure a whole year before he has a big media tie-in to push awareness of the character.  Maybe we'll get a large scale Groot BAF next year?  One can hope.  As such, it's not likely that we'll see this figure released again next year, so if you want a heavily armed space raccoon on your display shelf, you better get Black Panther, The Wrecker, and Jean Grey while you can.  You can find this wave now on Amazon and BBTS.
Posted by Zak Sousa at 8:00 AM