I'm not going to lie, this was the figure I was originally most looking forward to when the Rocket Raccoon wave was announced.  Yeah, ok, so I've basically said that about every figure in the series so far, but I really mean it this time.  This was the one I was looking forward to the most.  Why?  Because I grew up in the Jim Lee X-Men era and I still have a nostalgic soft spot for these character designs.  And because I actually really liked Jean as a character.  And because I really wanted to see Hasbro do the character some justice after the horrid Marvel Universe version.  Was justice dealt?  Check her out after the jump. 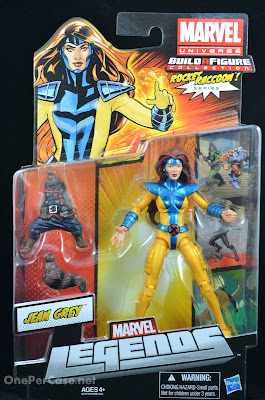 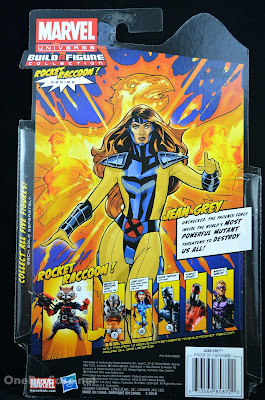 Jean is another unfortunate victim of Hasbro's "now you see 'em, now you don't" variant/running change strategy.  When she was first revealed, she was shown to have not one, but two variants- white Phoenix, and Age of Apocalypse Jean.  Well then Hasbro revealed at Comic Con this year that the variants are nixed, at least until they find another way to get them out.  So I'm not counting on seeing them anytime soon.  But Jean's card art still shows the two variants hidden in the flames of the Phoenix on back.  Go ahead and twist that knife just a little more, big H. 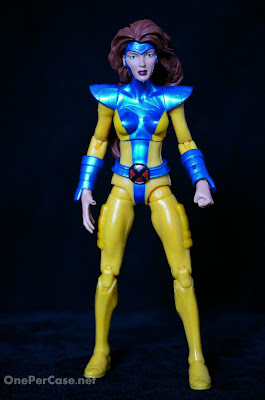 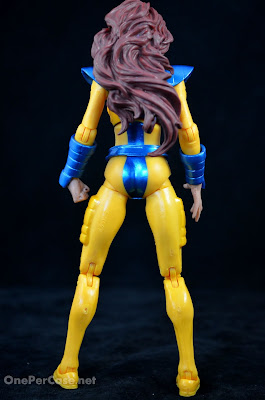 Although, if we're only getting one Jean for now, I am really glad it was the 90's costume figure.  I know it's not a popular opinion, but this is one of my favorite costumes for Jean (Phoenix/Dark Phoenix being the other).  And nothing screams "90's comic book era" like the X-Men's uniforms from this time period.  She's got shoulder pads, oddly placed pouches, and the seemingly pointless head gear that covers neither her face nor the top of her head.  I love it.  The head, belt, gauntlets, and hands (I believe) are entirely new sculpts.  The head is a nice sculpt, though a little neutral in the facial expression.  The hair has a lot of detail, and I like that Hasbro didn't cheap out by simply painting the head gear on.  It's actually sculpted. 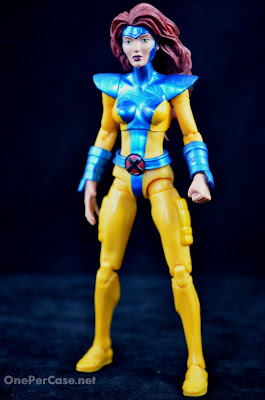 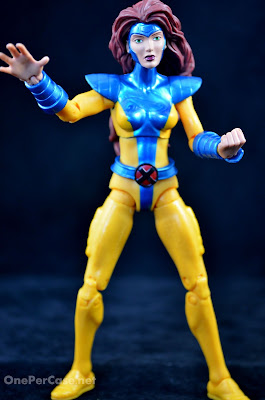 The rest of the figure is based on Hasbro's previous female buck.  You know, the one with the skinny legs.  Yeah, that's a little disappointing, as I would have loved to see her on the new Moonstone body, but she honestly doesn't look too bad with these legs.  That may be helped slightly by the retooled thighs with the strange pouch/padding things on the sides.  It creates sort of an optical illusion making the thighs look a little wider than they really are.  In fact, there are enough retooled parts here that I'm surprised they even bothered to use this older body. 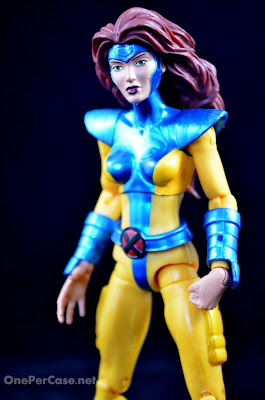 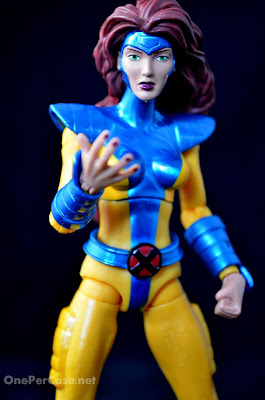 Speaking of retooling the old chicken legs, Hasbro also saw fit to retool the calves to include newer rocker ankles.  That's a nice add, and really helps with stabilizing the figure.  Which is great, because that big beautiful head and hair sculpt really make the figure top heavy, and balancing her in a stance that she'll remain upright in can be a little tricky.  The rest of the articulation is pretty much standard:  Ball-socket head, ball jointed torso, ball-hinged shoulders, ball-hinged elbows and wrists with swivels, the aforementioned ankles, and hips with thigh swivels, and double-hinged knees.  She is missing the bicep swivel, so that hurts poseability a little. 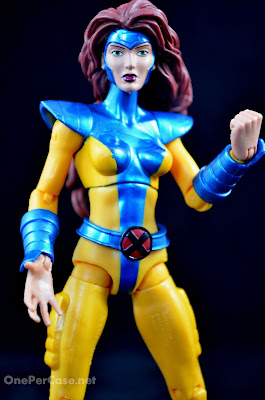 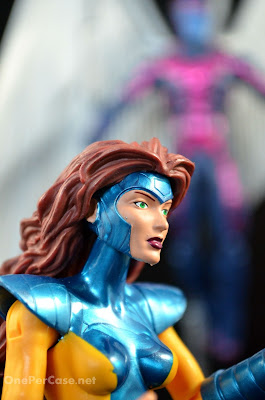 Jean's paint job it pretty nice.  The blue parts are cast in the same swirly, marbled plastic used on Iron Monger.  The yellow is flat and contrasts nicely with the shiny blue.  The is a little bit of slop on my Jean, though.  The lines on her chest aren't perfect, and she's got a little bit of smudging on her chin and around the edge of her face and head gear.  But the eyes, eye brows and lips are all pretty well applied, so she doesn't look derpy at all.  My only other minor gripe with the deco is her hair.  I wish it were just a little bit more red. 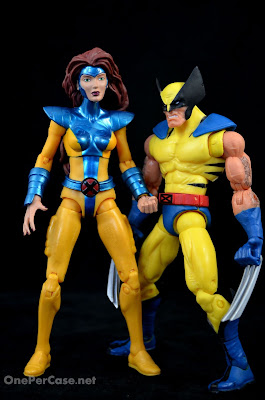 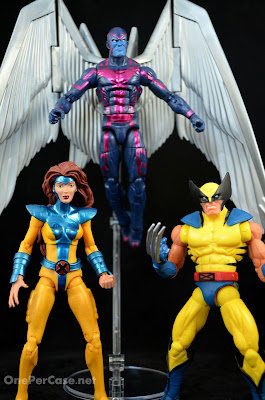 So Jean didn't turn out to be my favorite of the wave, but she is by no means disappointing.  She looks just as great as the original prototype.  Better even, since that one looked like an anime character, if I recall correctly.  Jean just doesn't use enough new parts to make her completely amazing.  But I am glad to finally have her on my 90's X-Men shelf, and she's definitely a beautiful figure.  If this wave ever actually hits retail, she will not hang on pegs for long.  She's currently sold out on BBTS, but can be found for varying prices on Amazon.  I wouldn't wait too long for her, though.  She'll only go up in price.

-Words, photos and nostalgia for ridiculous 90's costumes by Zak