Next up in the Rocket Raccoon BAF wave, a sorely needed re-do of an iconic Avengers character not done in 6", comic-style since the Toybiz days.  We were supposed to get not one, but TWO new Hawkeyes out of this deal, but that's been put on hold for the time being.  Unfortunately, the version we did get is the one that I think most collectors probably wanted the least.  Is "modern" Hawkeye a bullseye?  Sorry, that joke was really lame.  Just click the read more link already. 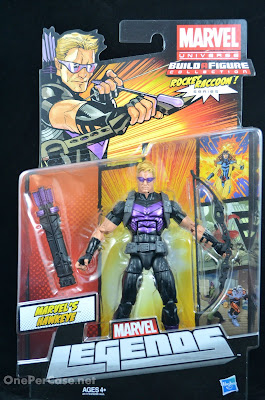 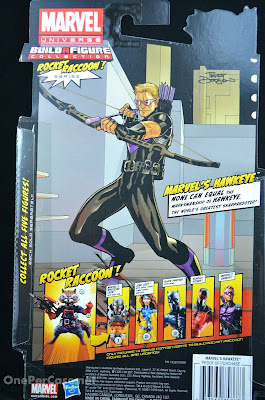 Unlike Jean Grey's packaging, Hawkeye's doesn't show any hints of the variant figure/costume that was planned.  That's interesting.  I find it odd that Hasbro would rely on the relatively recent and mostly unknown (to the casual buyer) move-inspired costume to sell the figure in the promo art, especially with this being a collector-targeted line that clearly focuses much more on the comic (not movie) incarnations of characters.  I guess that just shows how important the movie-verse influence has become over the comics universe characters.  Regardless, it's a shame for me, because I actually prefer the classic masked costume over the modern, boring, "I'm a secret agent not a superhero" outfit.  That goes for the figure as well, not just the card art. 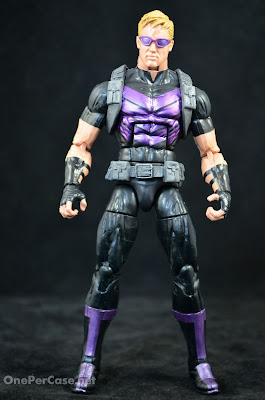 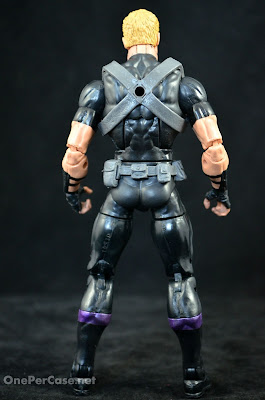 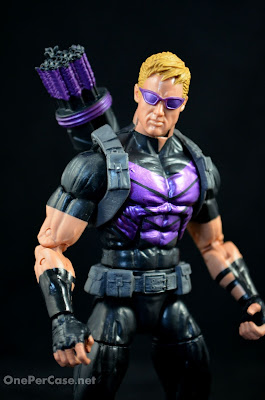 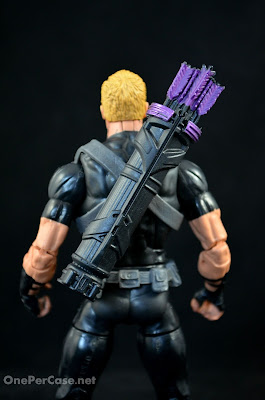 That probably makes it sound like I hate the costume, and therefore don't like the figure.  That's not the case.  I just find the more classic costume to be more visually appealing.  And I actually like this figure quite a bit, due in large part to the amaze-bawlz body once again in use here.  It's the same body as Black Panther (and Bucky Cap, Archangel, and US Agent) and it rocks.  It rocks so hard.  The sculpt is beautiful, and the articulation is pretty much perfect.  I can't think of a single pose that I wish this figure could hit that it doesn't already.  I will probably use those exact words every time I review a figure using this body. 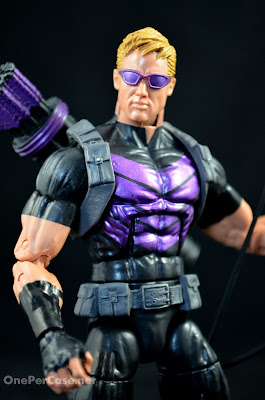 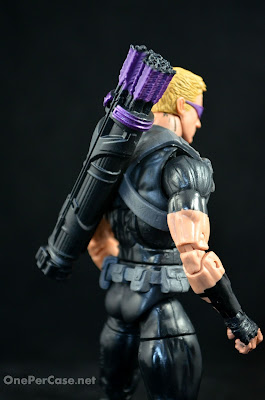 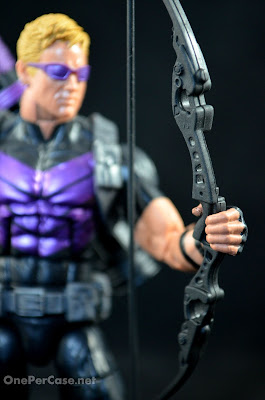 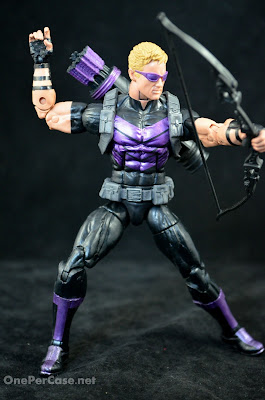 The deco on the figure, like the on-page costume, is pretty plain.  Basic black body suit with some purple on the boots and chest.  The chest emblem is supposed to look like the fletching of an arrow.  Get it?  It actually took me a little while to realize that when the costume first debuted.  So it is actually just slightly above the not-very-inspired category.  That's no fault of the figure though, and the paint application is mostly immaculate.  The purple is a nice metallic that contrasts really well with the semi-gloss black.  And one little detail that helps liven it up a bit is the shoulder harness and belt.  But the points earned by those add-ons is basically negated by the painted-on arm guards.  Which are actually on backwards compared to how a real archer would wear them, but that's a nerd rage-fest for another day, and it's already being hotly debated elsewhere on the internets.  Regardless, it is once again not a fault of the figure, since the guards are drawn that way in most comic appearances as well.  Over all, the deco is great, well applied (except for a little bit of slop on the back of the neck on mine), and the colors really pop. 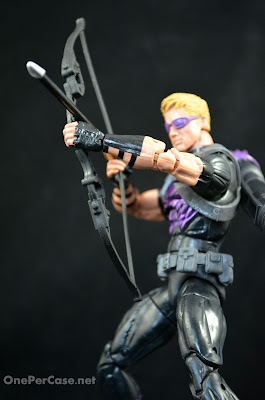 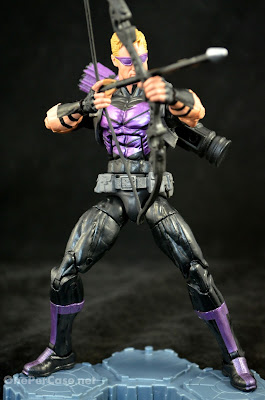 Hawkeye includes basically the same accessories as the Avengers movie 6" Hawkeye.  Same bow, same quiver.  But this time, Hasbro sculpted arrows in the quiver.  That was something I found oddly lacking on the movie figure.  So that's cool.  I'm kind of tempted now to buy a second of this figure, just to repaint the arrows and give the quiver to movie Barton.  Note that this figure does not include a loose arrow.  I actually borrowed one from the Toybiz Hawkeye, which works pretty well for this newer version.  And bonus points to Hasbro for the bow actually being able to shoot the arrow.  Hawkeye also doesn't include the stand seen in some of these photos, despite the fact that he also doesn't include a BAF part.  Though I guess getting the bow and quiver is still more than most figures include nowadays.  So nice job on the accessories, too, H. 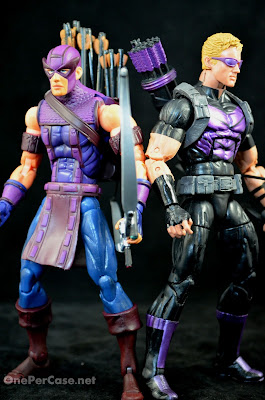 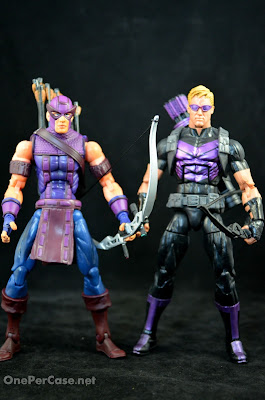 Comparing this figure to the Toybiz version really highlights how far Hasbro has come with the Legends line, and how their newest bodies are superior even to Toybiz's.  Granted, Hawkeye wasn't one of their best efforts back then, but still.  We need a new classic costume version on this body.  And I don't mean just the one-sleeved Heroic Age variant that is now in limbo.  I want a variant of the variant, with no sleeves and those arm pouches instead. 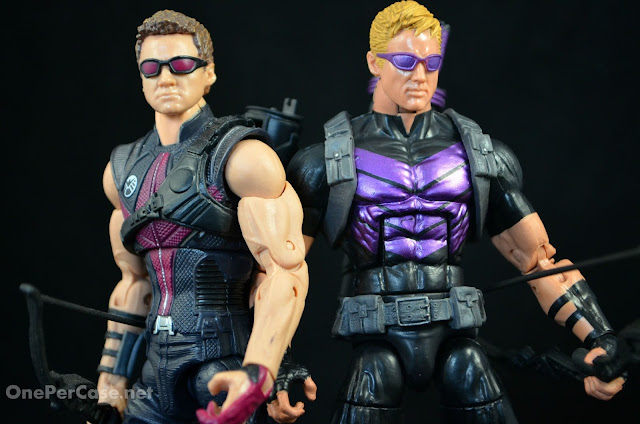 Here's Barton with his Jeremy Renner version.  Both are awesome figures (if you haven't noticed, I dig movie figures just as much as comic figures when they're done well, and when the movie doesn't suck), but the lack of arrows in Renner-Barton's quiver really stands out as a miss for that figure.  And the metallic purple paint gives boy-band-Barton a little more visual oomph.  Like, I kind of expect the figure to break into some crappy pop song and dance across my shelf.  And somehow, that's a good thing. 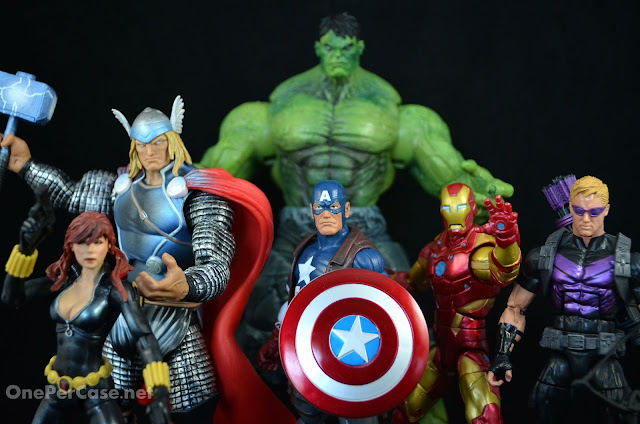 So while I am a little bummed that we got this version first, and are left to hope and wonder when we might see the Heroic Age variant reach our shelves, I do actually like this figure quite a bit.  He's got everything going for him.  Awesome sculpt and articulation, good accessories, and he's visually striking.  If you're building a modern/Marvel NOW/Avengers Assemble display, this figure is a must.  He's currently sold out on BBTS, but is available from various sellers on Amazon.  Really though, you're better off just buying a case and calling it a day. 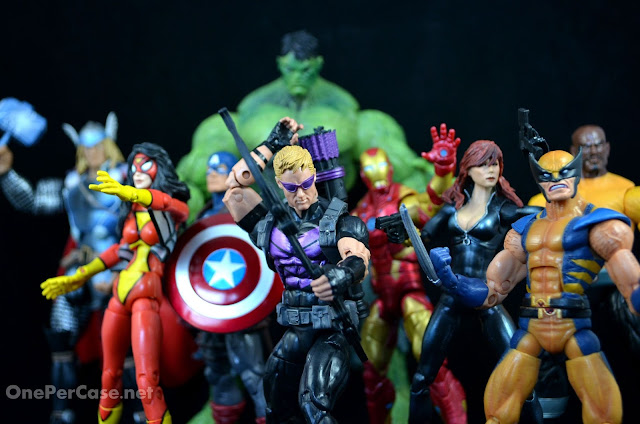 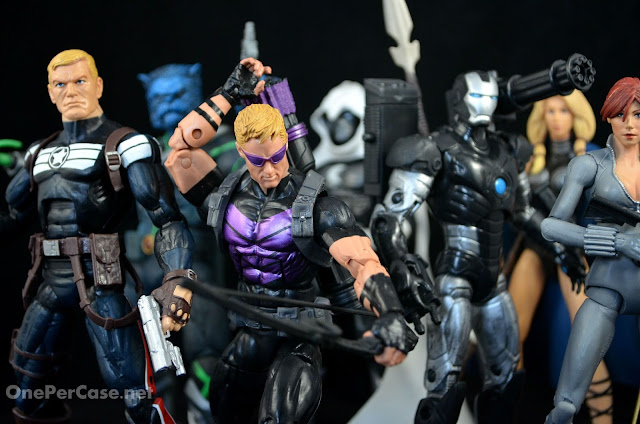 -Words, photos, and comparison of Clint Barton to 'N SYNC by Zak
Posted by Zak Sousa at 3:41 PM