I'm leaving for San Diego Comic Con in 7 hours, but I couldn't go until I knock out this review.  This beast of a diorama arrived from BBTS yesterday, and I had to immediately put it in the place I've had waiting for it on my Lost Tribe shelf.  But not before snapping some photos!  Who needs sleep when you've got new NECA toys to play with. 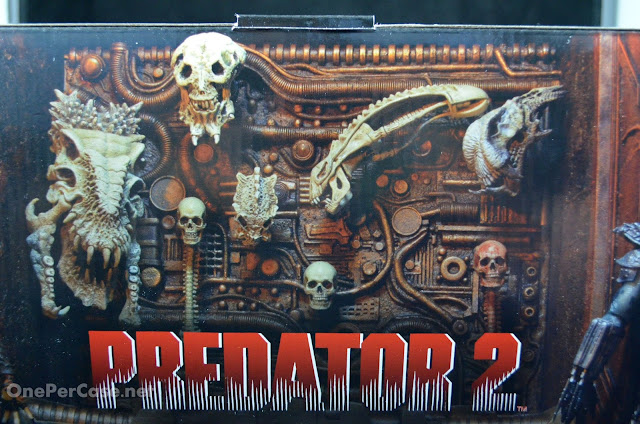 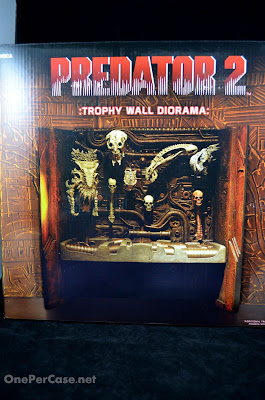 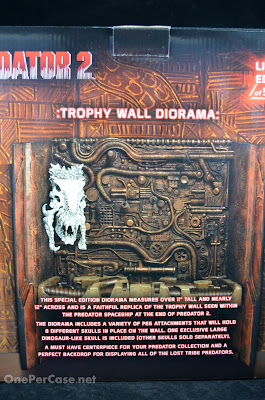 I was immediately shocked by the sheer size of this package.  I knew the diorama would be scaled for NECA's 7" Predators, but I don't think it sunk in how big that would make it until I was holding the 17 lb box from BBTS in my hands. 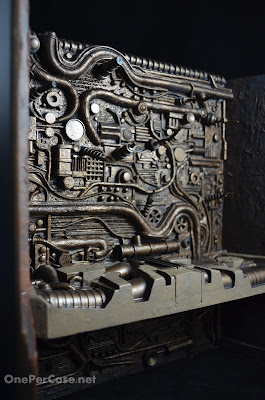 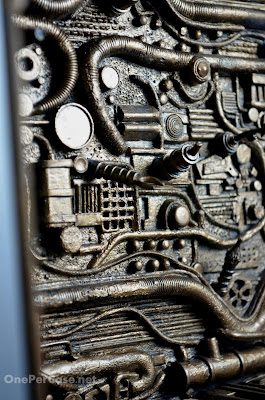 I'm not sure what this diorama is cast from, but it's definitely not plastic.  It actually feels and looks like metal, with maybe poly-stone for the shelf?   Whatever it is, it's hefty.  You could kill a guy with this.  This is definitely not a toy. 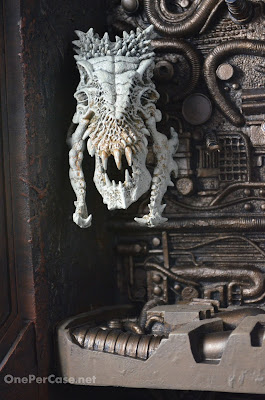 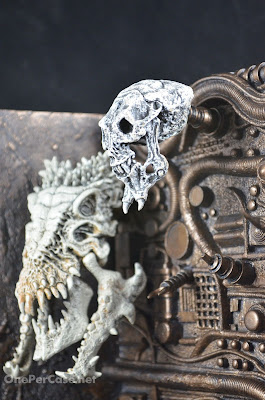 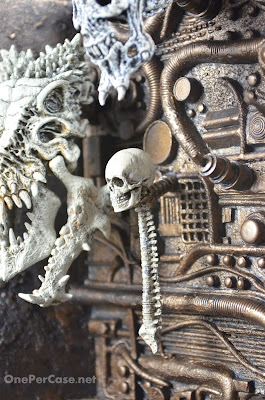 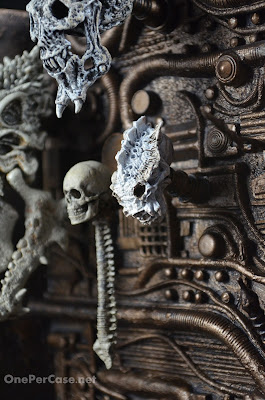 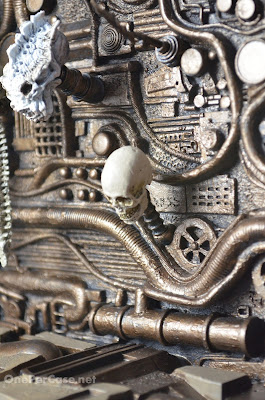 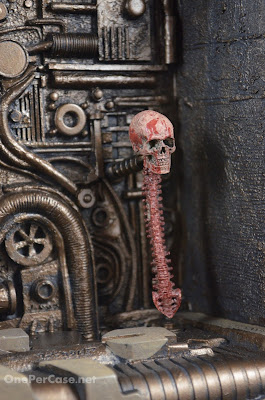 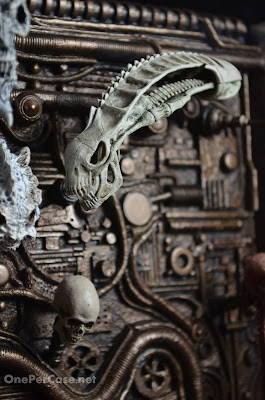 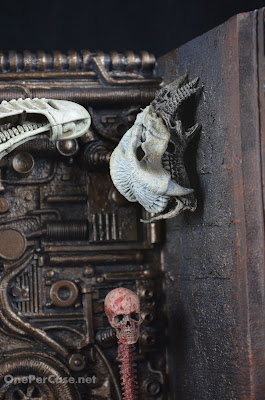 The large dinosaur-like skull is included with the wall.  The rest of the skulls have been included with various figures, exclusives, and two-packs throughout the past few years of the Predators line.  Luckily for anyone that hasn't been collecting this line seriously since the beginning, NECA has produced a run of 5,000 complete sets of the trophy skulls, available through their eBay or Amazon store.  Since the wall was also made in a limited edition of 5,000 pieces, there should be more than enough to go around. 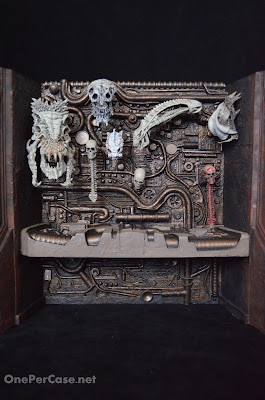 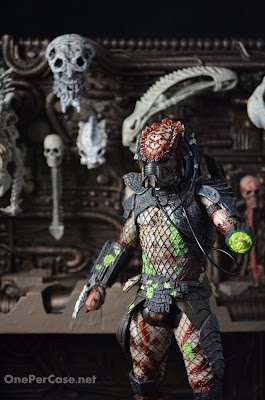 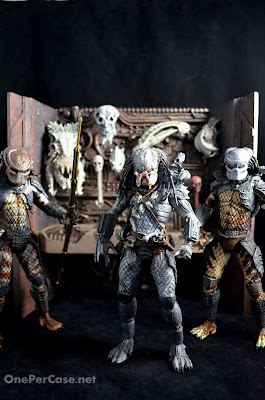 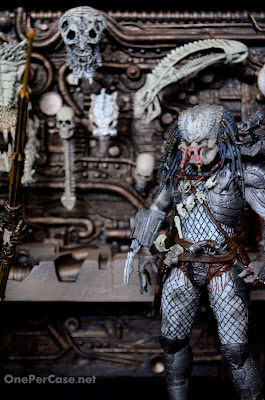 The skulls all attach to the wall by various sized pegs, claws and other attachments that plug into both the wall and the skulls.  These pegs are shape-coded, so they only fit their specific slot on the wall, and the ones that actually plug into the skulls are sized and shaped to only fit their specific skull.  The human skulls on spines actually just sit in a pronged-fork type peg.  And the Xenomorph skull sits on two Predator wrist-blades that protrude from the wall. 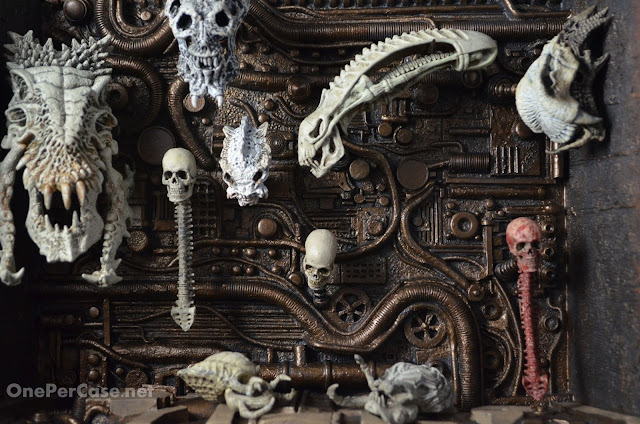 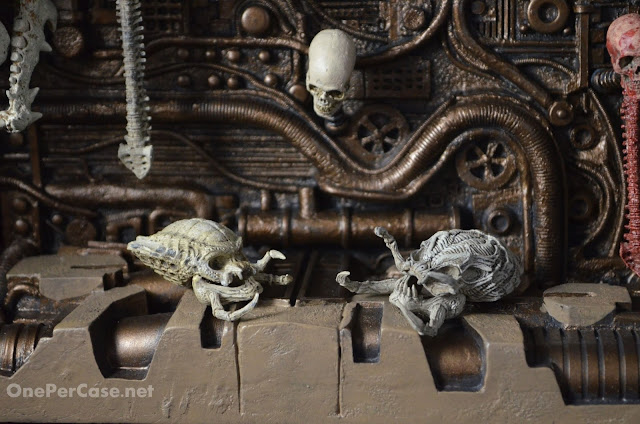 Throughout the past few years that I've been collecting these skulls, I didn't really take note of the peg holes in some of them, but after placing them on the wall, I realized... NECA must have been planning this all along.  That kind of blew me away.  Talk about dedication to a line.  They didn't know when the line began if they'd be able to pull this off, but they prepared in advance anyway.  Good job, NECA.  You continue to impress me. 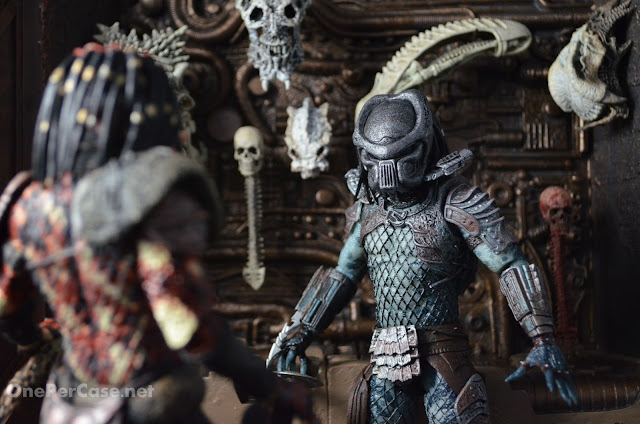 The sculpt of this thing is just flat out amazing.  There is a ton of detail and texture all over this wall.  And it looks incredibly accurate to the screen used set, as far as I can tell. 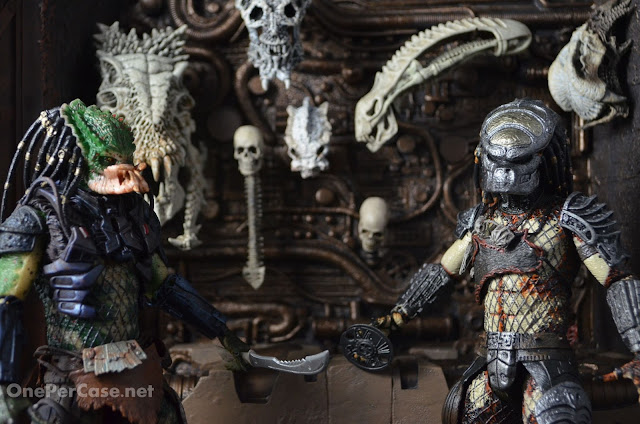 If you're on the fence about this set, get it.  You won't regret it.  It's worth every penny of the price tag once you have it in hand and feel the weight.  I don't expect this set to stay available for long, so I wouldn't hesitate.  BBTS still has it in stock, and you can find it through various other online stores.

-Words, photos, and playing with Predators when I should be sleeping by Zak
Posted by Zak Sousa at 10:21 PM