Hooray more hall of armor bases!  Oh, and War Machine.  Yeah.  Despite the armor never actually showing up in the movie in its traditional grey and silver paint job, I'm a sucker for War Machine and had to buy this figure anyway.  And by "buy this figure", yes, I mean several of this figure. 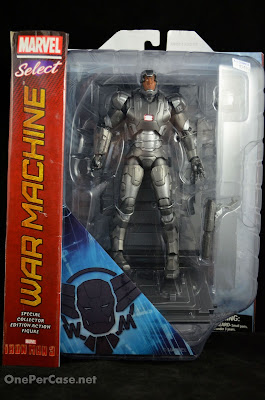 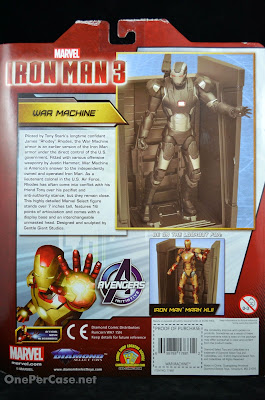 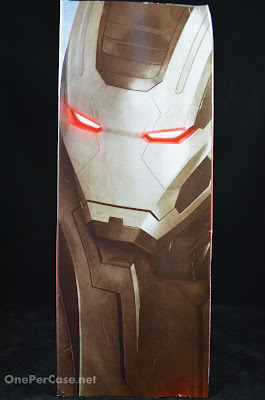 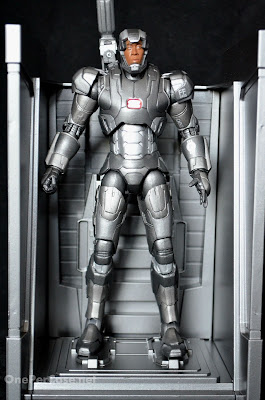 Standard Marvel Select over-sized packaging with some cool War Machine art, character bio and cross-sell.  For the MOC collectors, these must look really cool all stacked side by side, but they just take up too much room. 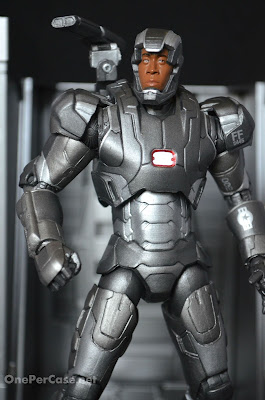 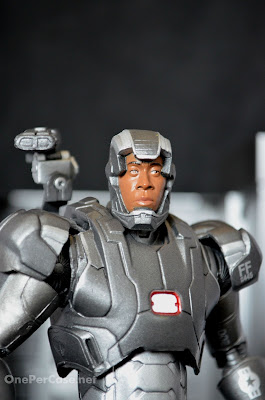 Right off the bat, I'm not as impressed with this figure as I was the Mark 42.  He just doesn't feel or look quite as nice.  That may be due in part to the fact that I don't like this armor as much as the first War Machine armor from Iron Man 2, but even putting that bias aside, it feels like a lower quality action figure. 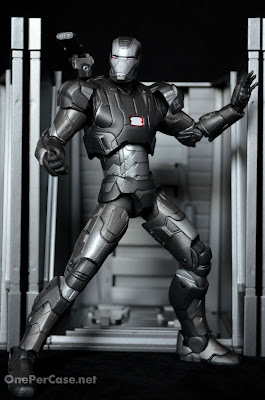 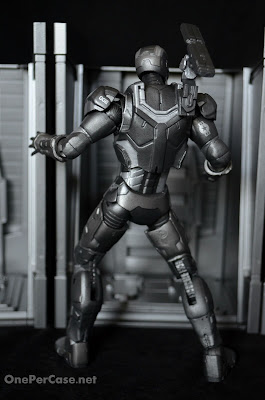 The sculpt looks pretty accurate to the movie armor design, but like the Mark 42, his hips seem to be assembled backwards, which looks a little odd.  And to make it worse, these hip joints are incredibly loose (on the one I've opened so far, at least), which make it damn near impossible to get the figure to stand up on it's own.  Seriously, this figure fell on its face at least 50 times during the course of this photo shoot.  I can hold him by his head and gently shake him and his lakes flop everywhere.  So bad.  So that's a couple disappointing QC issues right off the bat. 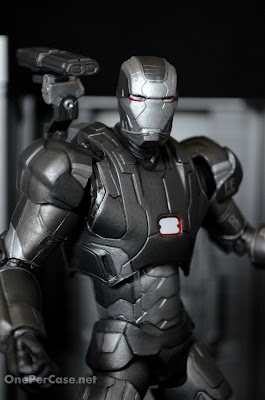 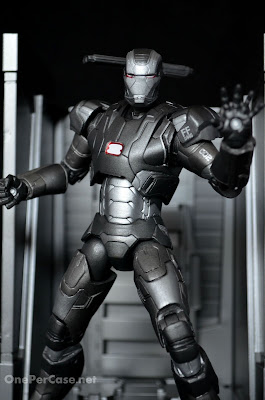 The Don Cheadle face sculpt on the unmasked alternate head it pretty good, but where's the mask?  This armor isn't modular and prehensile like the 42.  The mask should stay attached to the helmet.  We never saw it like this in the movie.  But this is indicative of an issue I pointed out in the 42 review, also; I'm pretty certain that the unmasked head sculpts were originally supposed to have masks that plugged into them.  This head also has the unusually thick walls of the helmet around the face sculpt.  It just looks strange without a mask to fit into it. 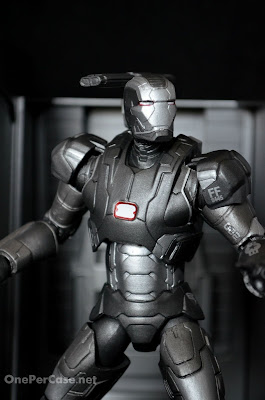 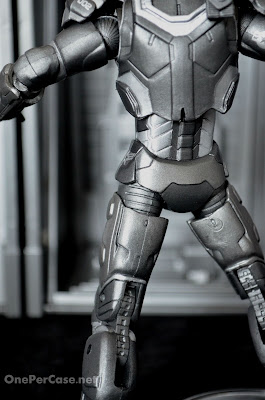 The paint is also less impressive than the Mark 42.  There's very little contrast between the silver and the metallic grey.  The grey would've looked better a few shades darker.  On the plus side, though, the paint is very well applied.  No mistakes or smudges on mine that I could notice.  And all of the military markings and insignia look nice and sharp, too. 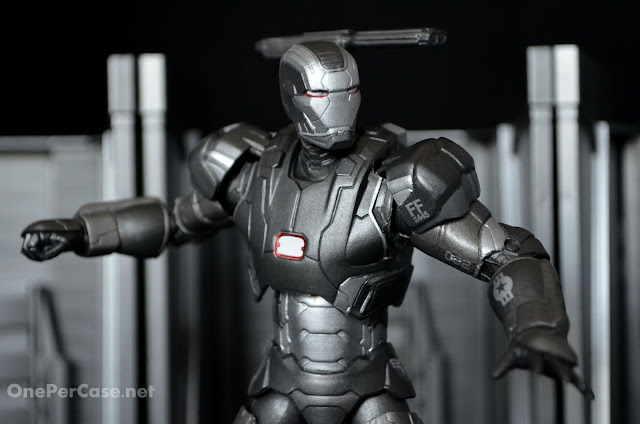 Also in the Pro's column, the articulation (aside from the wobbly backwards hips) is great.  Again, it's almost identical to Hasbro's version of the armor, but it swaps the double-hinged elbows for single-hinged with forearm swivels, and adds some great ankle rockers that the Hasbro version lacked.  So it's a fair trade off.  If the hips weren't so loose, this figure would be able to hit some great poses.  As it is, though, it's a chore just trying to get him to stand at attention. 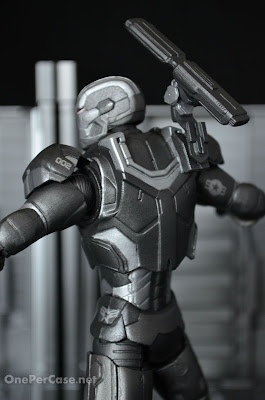 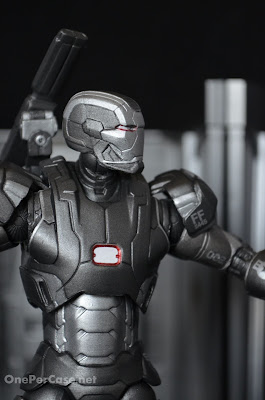 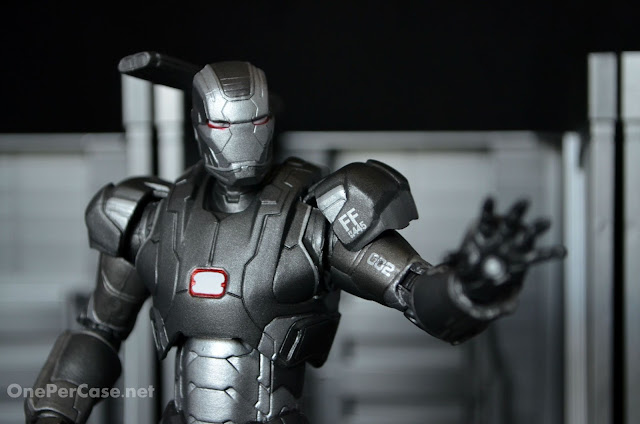 In the accessories department, War Machine drops the alternate hands but adds his useless shoulder canon (that did nothing in the movie).  Unlike the Hasbro version, this one can only be plugged in on one side of the back, so that limits the display options a bit.  Also, the gun snaps off the arm every time the figure falls on his face.  It pops right back together, but still, annoying. 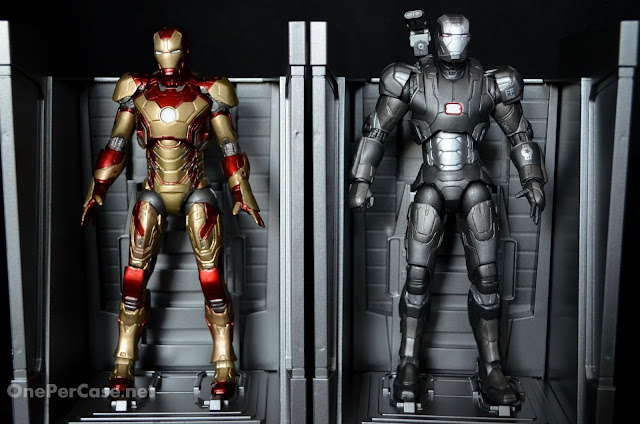 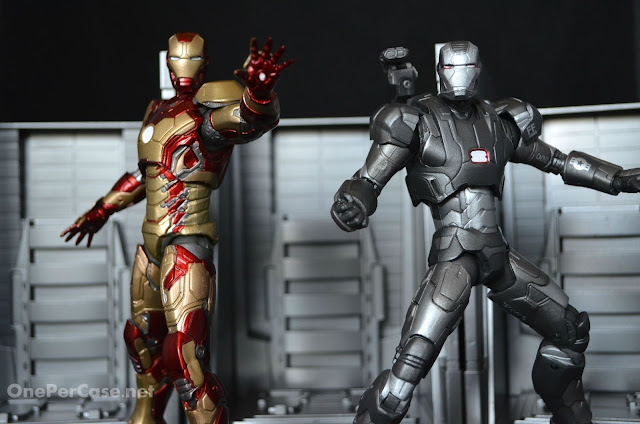 But the other accessory is the main reason I bought this figure.  The hall of armor bay is identical to the one with the Mark 42.  I was worried at first that they might be cast in different shades of plastic, like the Iron Man 2 figures, but that was luckily not the case.  It matches perfectly.  And once again, the figure is just slightly too tall for it, so in my eyes, it looks better with the six inch line figures.  Which is exactly why I wanted it.  My only minor gripe with these bases is that, when stacked side by side, they don't quite sit flush with each other.  They look good in a group, but there is a small gap between them.  I wish DST would have put a little more forethought into these and made them connectable, with flush sides.  That would make for a killer display piece.  Especially if they went another extra mile and gave us LEDs in them.  Can you imagine? That would kick ass. 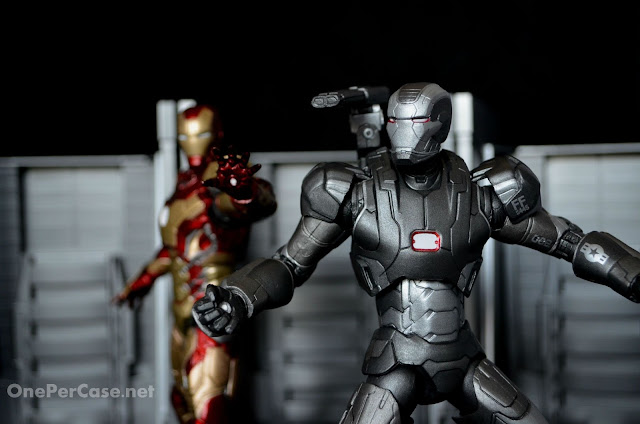 So here's the final verdict.  This figure isn't essential to your collection.  Unless you're a die-hard War Machine fan, or want a bunch of these hall of armor bases, this figure is easily forgetable, with his lackluster deco and flimsy hip joints (though to be fair, that might just be mine).  If you want something a little more movie accurate, the Disney Store will have an exclusive repaint of this figure in the Iron Patriot colors in the near future.  If you absolutely do need a Marvel Select War Machine, he's showing up now in comic and specialty shops, and should be hitting BBTS any day now. 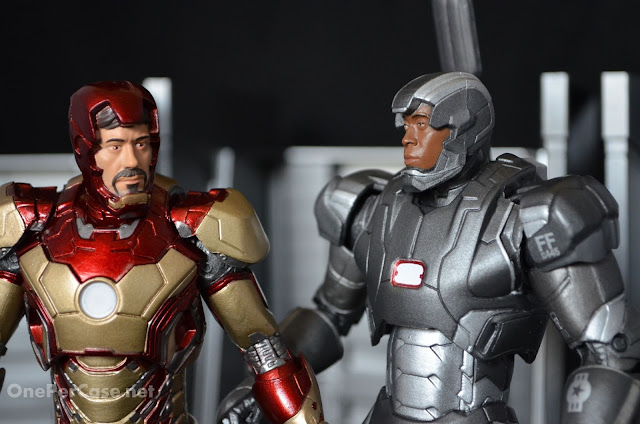 Words, photos, and love for the Cheadle but not so much for the figure by Zak
Posted by Zak Sousa at 9:00 AM