A couple months ago, we looked at Hasbro's 6" Iron Man Mark 42.  Now, we're taking a look at DST's recently released Marvel Select version of the same armor.  Why the heck did I bother buying this version, you ask?  Because it came with a sweet hall of armor base.  Duh.


I actually realized at Toy Fair earlier this year when DST revealed their Iron Man 3 figures that I wanted to buy a bunch of them, seven to be exact, just for their hall of armor bases.  To use in a display with my six-inch movie armors.  So yeah, that's happening.  Anyone want to buy some loose Iron Mans without their bases? Just kidding.  Or am I? 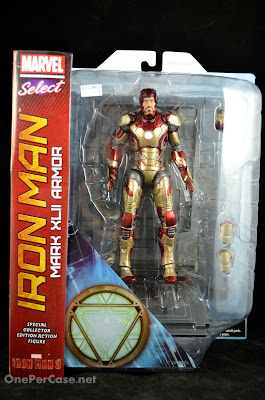 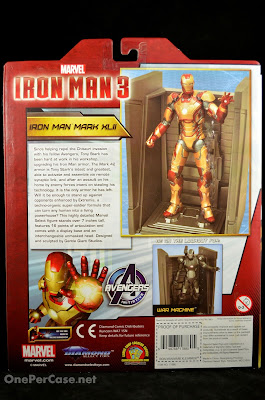 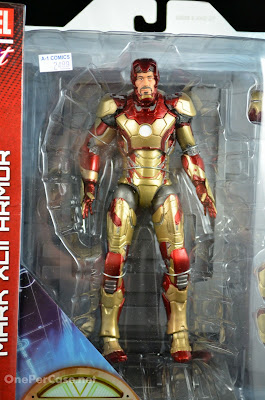 The figure comes in the typical Select style over-sized packaging.  With that base included, most of the space in the bubble is actually occupied this time.  The art on the spine looks cool, and the back of the card has the obligatory character bio and cross-sell for War Machine.  We'll look at him tomorrow. 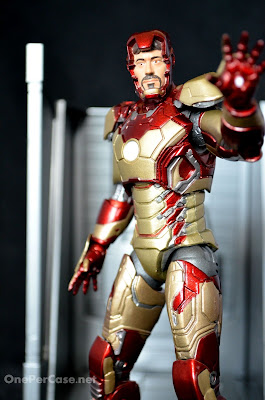 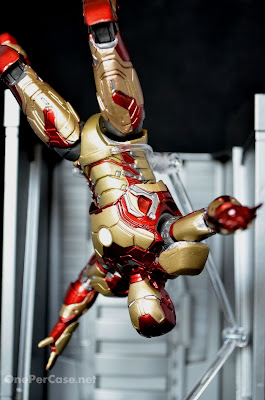 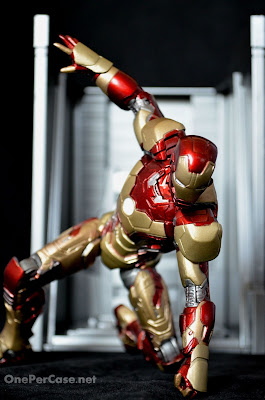 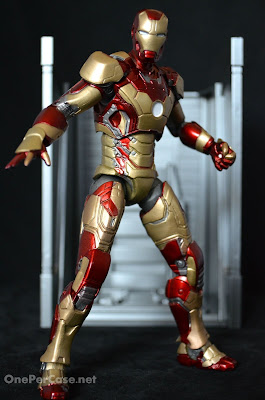 Unlike DST's last movie Iron Man armor (the Mark VI), this figure actually has a nice, accurate, and most importantly, well proportioned sculpt.  No more giant barrel chest and stubby arms.  This figure looks pretty spot-on, sculpt wise, to the on-screen armor.  Lots of great detail in the armor's numerous panels and plates.  But it's not without a few flaws. 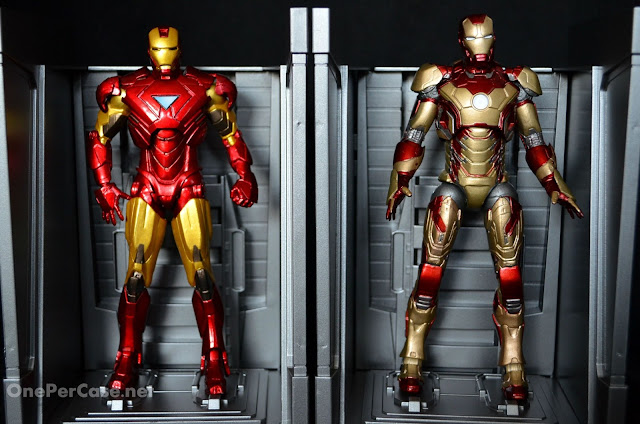 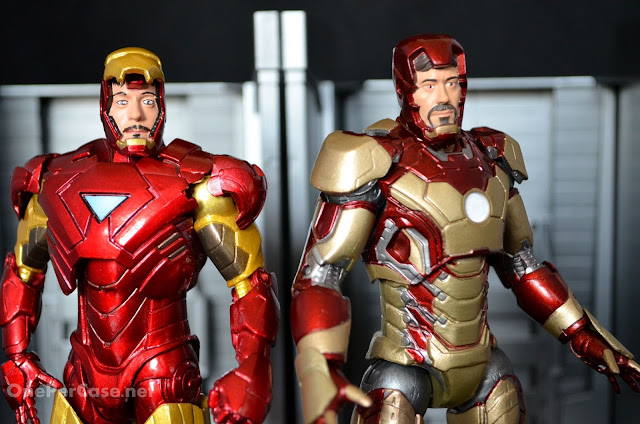 For one, the unmasked Tony Stark head is just... odd.  The face sculpt looks more like Robert Downey Jr. than DST's previous effort (that's not saying much), but it's still not exactly great.  And the thickness of the helmet around the face is oddly... thick.  I'm pretty sure this unmasked head was originally intended to have a  mask plug into it.  That's what the original press photos of these figures seemed to indicate, anyway. 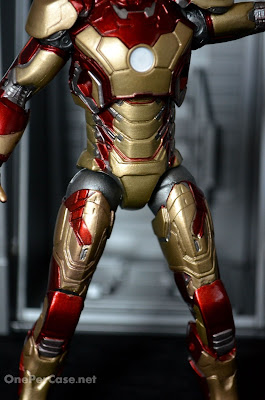 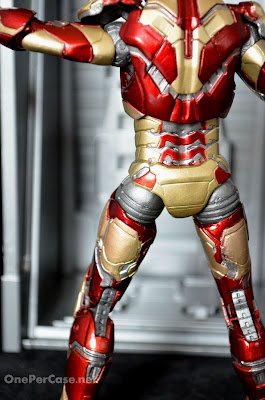 Then, there's the hip joints.  I'm pretty sure they're assembled backwards, kind of like all the Amazing Spider-Mans last year had backwards shoulders.  The press photos show the sculpted ridges on the front of the hip balls, but on all the production figures, they're on the back.  Butt ridges.  And if you try to simply rotate them in such a way that the ridges are in the front, then the legs don't swing completely down.  So yeah, pretty sure the factory goofed that one up.  Not a big deal, aside from the fact that the "smooth" side of the hip balls being in front looks a little odd.  Oh, and there's a deformity in the mold for the left hip.  While the right one is actually smooth in front, the left one has an odd, rough ridge-like bump on it.  It looks kinda bad, and it's on all the ones I've seen. 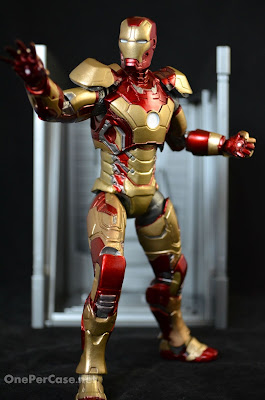 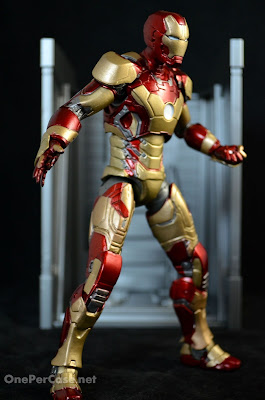 Other than those somewhat minor issues, the sculpt is pretty solid.  And so is the articulation.  This is one of those (admittedly increasingly frequent) times when a Marvel Select figure actually has just about all the functional articulation you could ask for in a figure of this size.  In fact, the articulation is almost identical to its Legends counterpart.  The only difference is the single-hinged elbows compared to Hasbro's double-hinges.  But the Select also has a forearm swivel, plus since we get an alternate pair of hands here, which also feature ball hinges in the wrist, I'd say Select actually technically has more POA's.  And yes, I realized while writing this review and editing photos that I had the right forearm rotated around backwards during the entire photo shoot.  There's a lot going on in this crazy looking armor and it wasn't very noticeable.  Sue me. 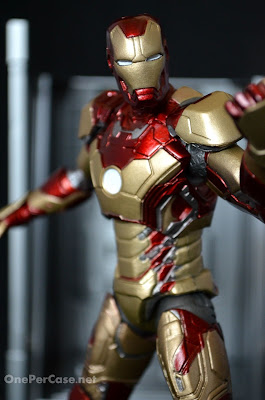 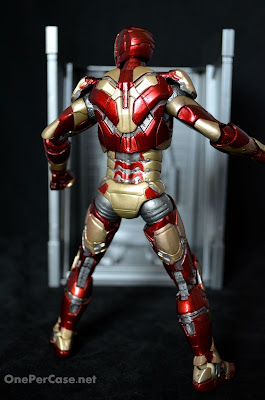 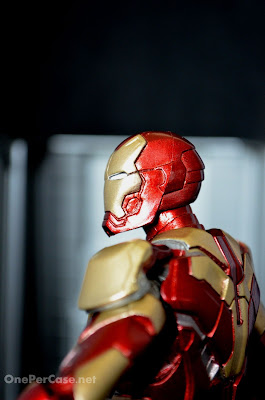 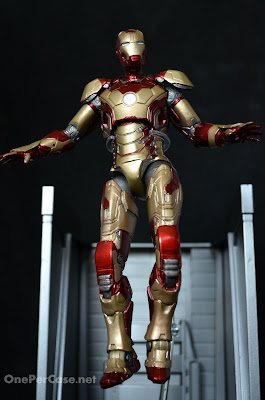 So to summarize, that's hinge and swivel neck, ball jointed torso, hinged shoulder plates, ball hinged shoulders, wrists, and hips, bicep, forearm and thigh swivels, single-hinged elbows, double-hinged knees, and some of the best damn looking ankle rockers I've ever seen.  He's definitely one of the most functionally poseable figures DST has put out to date.  And that lets him hit some sweet poses. 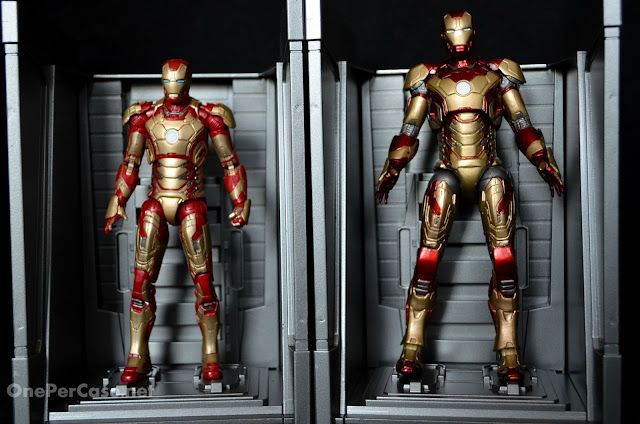 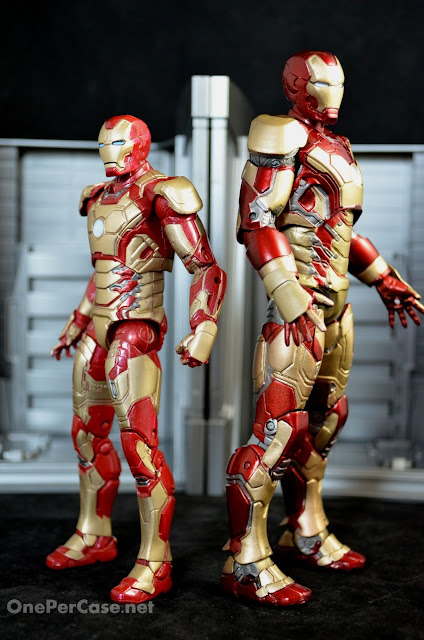 The paint, unfortunately, is both awesome and frustrating.  The good:  The deep metallic red and gold look great.  And the silver at the shoulders, hips, knees, ankles, and elbows (all of which the Legends figure lacks) help the figure look more screen accurate.  In fact, the colors make the Hasbro version look downright cheap by comparison.  The bad:  The paint is applied sloppily in areas, especially the legs and arms.  And there are a couple of pretty glaring paint errors.  The top of the chest is painted red where it should be gold, and so is the lower "lip" of the mask on the masked head.  But the unmasked head doesn't have this error... and more frustratingly, the early hand-painted prototypes were painted correctly.  So, there's a couple more checks in the disappointingly growing column of quality control errors Diamond has made in recent figures. 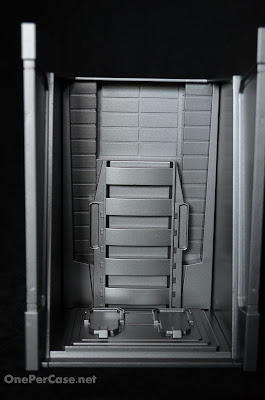 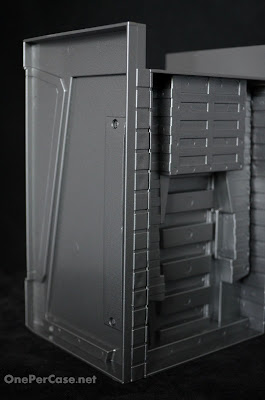 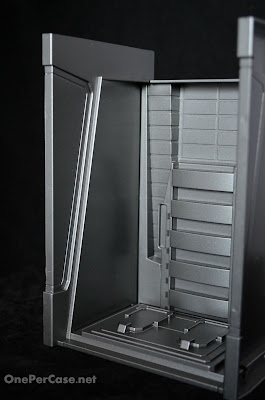 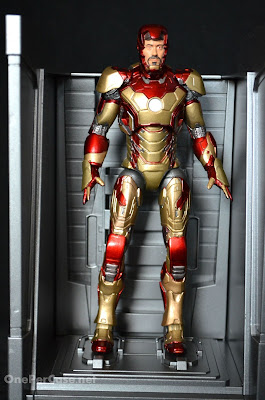 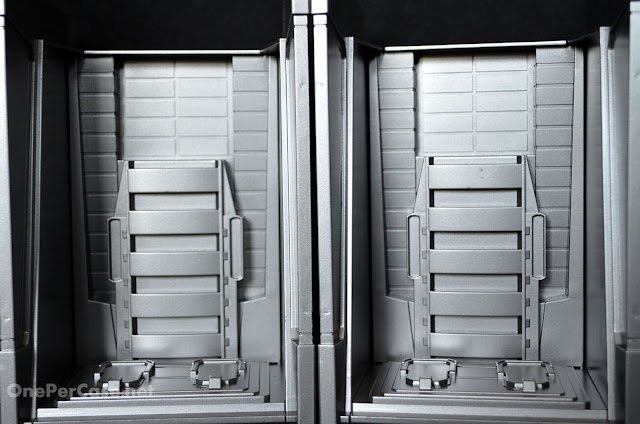 All of that aside, my favorite thing about this figure is the accessories.  The alternate head and hands are an excellent inclusion (one that I wish Hasbro would more consistently adopt), and the Hall of Armor display base is, hands down, my favorite accessory included with any figure in recent memory.  It's big, solid, and nicely detailed.  And unlike the versions from DST's Iron Man 2 figures, this one actually looks movie accurate.  My favorite part is that it's actually a little too short for the Select figures (especially that oddly short back wall), because that makes it pretty much perfectly sized for the Legends-scale figures, of which I have many. 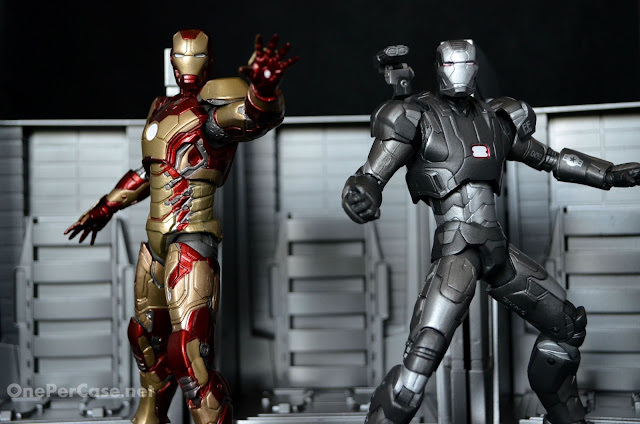 So while I bought this figure... err... several of this figure... for the awesome base, I'm not completely disappointed in the figure itself.  He's actually mostly pretty sharp.  Despite a few errors in paint and sculpt, it's a nice looking display piece with some great poseability.  I'll hang onto one to put alongside the rest of my small but growing Marvel Select collection.  This figure is showing up in comic and specialty shops now, and is available through BBTS.

Words, photos, and army building display bases by Zak
Posted by Zak Sousa at 9:00 AM