Next up in the Man of Steel Movie Masters line, and in celebration of Father's Day this weekend, here's Superman's dad.  Super Dad?


Russell Crowe as Jor-El?  Turned out to be a pretty brilliant casting choice.  He stole every scene he was in.  Which was more than I expected.  His figure is also a high point of this line. 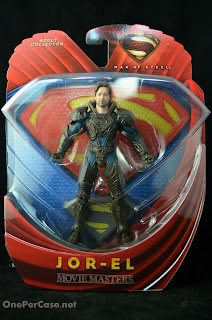 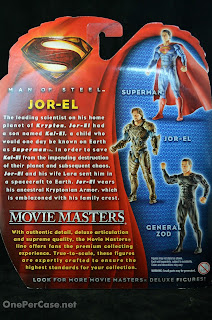 The packaging looks like the rest of the line.  Pretty uninteresting. 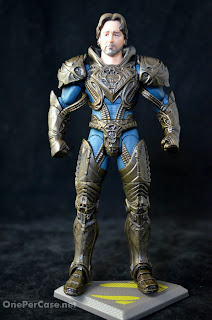 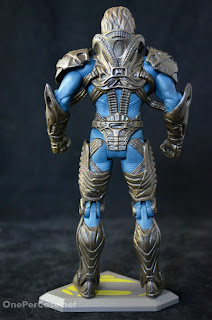 The figure is beautifully sculpted.  He has the same textured body suit as Superman, plus he has some very intricately detailed armor over it, full of interwoven plates and ridges.  The face sculpt is a great likeness of Crowe, with an expression that conveys the incredible weight his character shoulders in the film.  A lot of time and effort obviously went into this figure, and it shows. 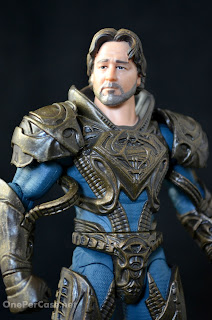 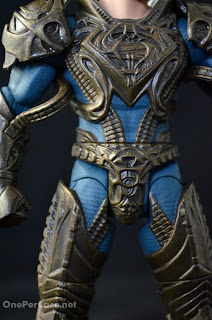 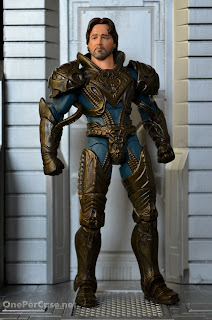 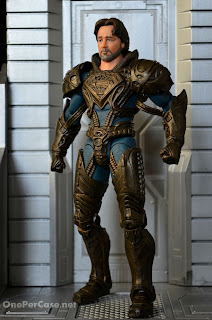 The paint job is almost equally as impressive.  The body suit is a nice shade of blue (that I think actually looks better than the blue of Superman's suit), and the armor plates are a nice textured bronze with highlights and low-lights.  The contrast between the flat blue and the metallic bronze looks great, and impressively, the lines are all solid and sharp.  No bleed-over or smudging.  The deco on the face is also pretty solid, with the beard and hair cleanly painted.  My only complaint is that the eyes and eyebrows look just a little too close together.  He looks just a little bit too worried.  But I guess if my planet were about to explode, I would be too. 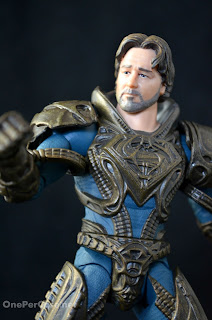 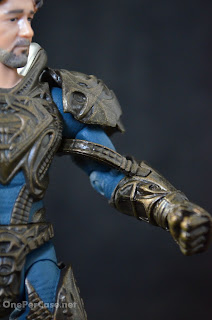 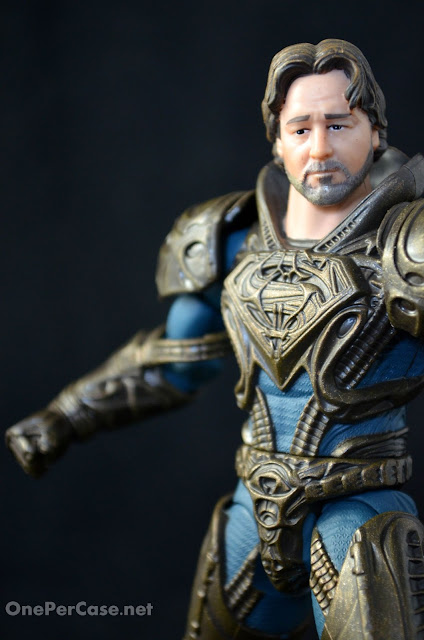 Unfortunately, the articulation suffers slightly, just as with Supes.  There is no ab-crunch.  Otherwise, the articulation is standard DCU, but some of the armor hinders range of motion.  The shoulder plates and "armor hoses" that connect from the back to the forearms restrict the figure from achieving many arm poses.  DCU articulation isn't the best to begin with, but when you take some out and restrict the range of motion, you wind up with little more than a slightly poseable statue. 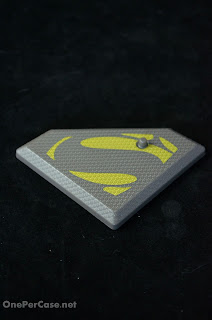 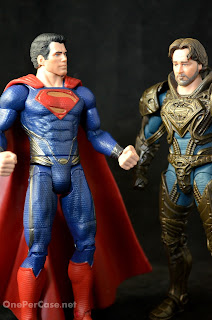 The only accessory that Jor-El includes is his shield-shaped figure stand, which bares the emblem of the House of El.  It uses gray instead of red against the yellow, which actually looks pretty cool.  One thing I've found with these stands, though, is that they just a little under-sized, and getting the figure to balance on it can be difficult, depending on how the figure is posed.  I would have liked to see Jor-El include an additional accessory, too.  Maybe a baby Kal in his pod that goes into the space ship.  Come to think of it, the spaceship might have made a really cool Collect 'n Connect piece for this line.  Since we got the awesome bat signal last year, I'm kind of bummed we didn't get one for this line. 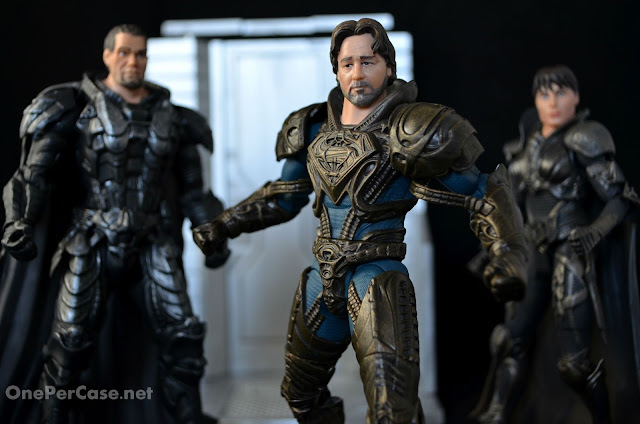 Over all, Jor-El is a pretty solid figure with an outstanding sculpt and nice deco.  If you're into the Movie Masters, he's a must have.  He was packed at just one per case in the first wave, but is starting to show up in higher numbers with subsequent case packs, so he shouldn't be hard to find for long.  Or you can pre-order him from BBTS.

Happy Father's Day to all the Super Dad's out there!
Posted by Zak Sousa at 12:56 PM