Faora was a serious badass in Man of Steel.  Seriously, I had just as much fun watching her fight as I did watching the title character.  Antje Traue (don't even ask me how to pronounce her name) was great in the role.  Unfortunately, this figure doesn't quite live up to it's namesake's level of ass-kickery. 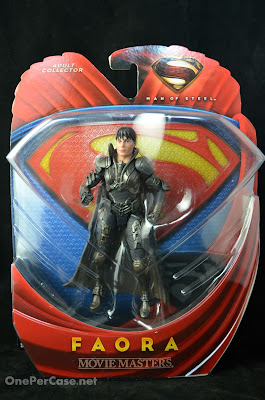 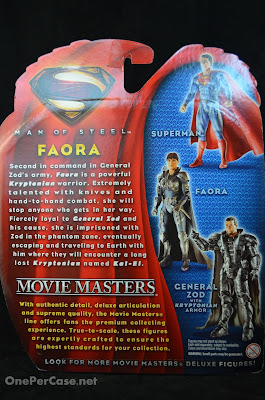 The packaging is boring and ugly, like the rest of the line. 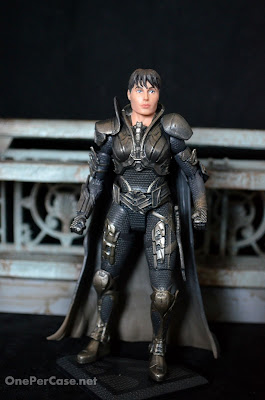 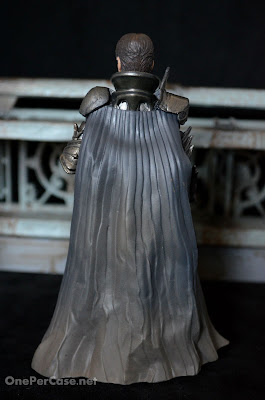 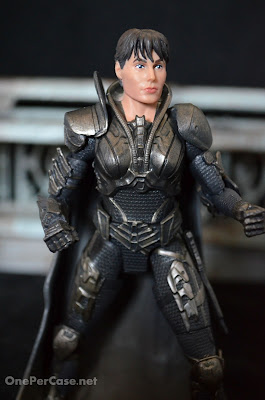 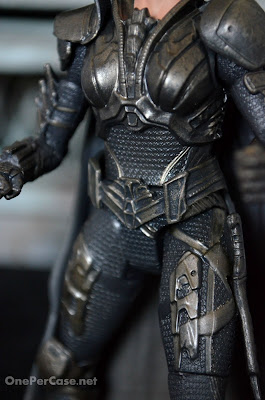 The figure features the same high level of detail in the sculpt as the rest of the figures in the line.  Mostly.  The armor is nicely executed, and the under-sheath is intricately textured like the rest.  My main complaint, though, is the head sculpt.  She doesn't bear a very strong likeness to Traue.  It's the least accurate likeness of all the figures in the series.  The jaw is a little too square and masculine, the hair isn't quite right, and the eyes don't convey the proper blend of beauty and malice.  Still, despite the lack of resemblance to the actress, the sculpt is nice and does make for a good second-in-command to Zod. 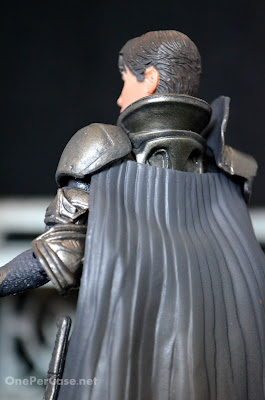 The cape, like the rest in this line, is molded in a nice flexible plastic, so it's not too obtrusive.  And it also has some nice detail sculpted in.  I wish all of Mattel's sculpted capes were as nice as those in this line.  But it looks a little weird at the top, being cut in a straight line and hung from the back of the shoulders, leaving an unusual gap at the back of the neck. 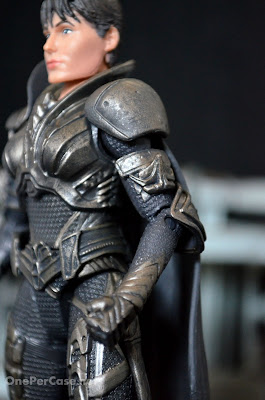 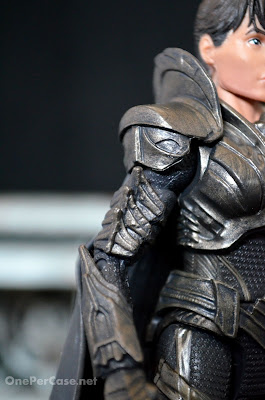 The articulation is standard for the Movie Masters line, and is missing the torso joint like the rest of the Man of Steel figures.  That's a bummer, because this figure could have really benefit from that little bit of extra movement, and the sculpt  would have hidden it perfectly. 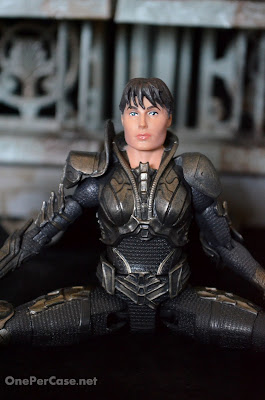 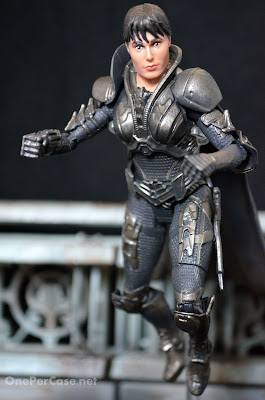 The odd thing about Faora's articulation is her hips.  They're not the standard DCU swivel-hinge hips that you see in the rest of the line.  They're actually ball jointed.  Almost G.I. Joe-style, but with a better range of motion.  I'm not sure why Mattel went a different route with the hips on just this one figure, but I like it.  I wouldn't mind seeing more of these in Mattel's DC lines.  It moves just the same, but looks better than the standard hip. 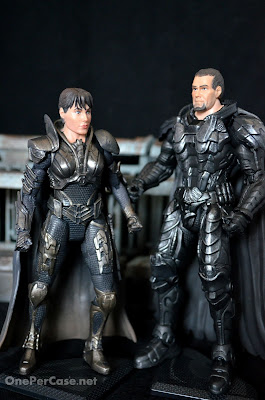 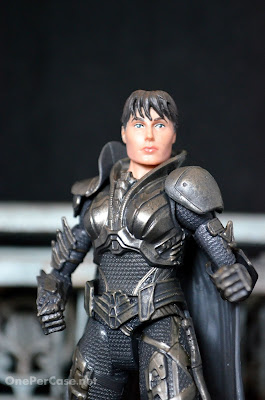 Faora's paint job is nicely executed, too.  The undersuit is a flat grey/black, and the armor is a nice metallic gun metal with a subtle dark wash in areas that brings out some detail.  The two tones between the armor and suit contrast nicely with each other, and give the figure less of a plastic-y toy look.  The cape also has some nice shading which helps it look more believable.  The paint on the head is decent as well, though some heavier eyeliner around the eyes might have helped the likeness issue. 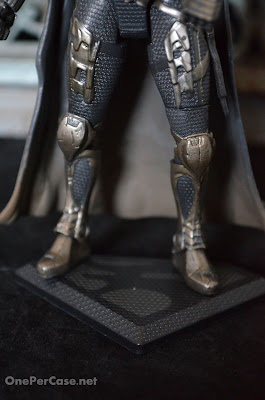 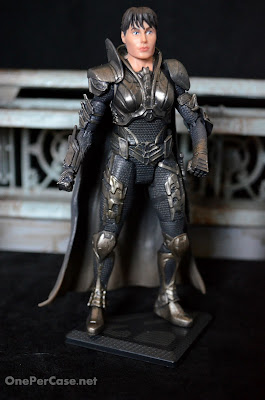 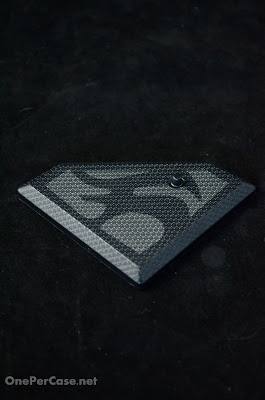 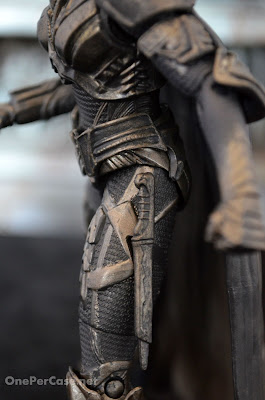 She is a little disappointingly light on accessories, unfortunately.  A removable helmet similar to Zod's would have been a perfect addition, especially since the character wore it for so long on-screen.  Also, her knife that she wields against Colonel Hardy is sculpted in it's holster on her leg.  But it's not removable (not that she'd be able to hold it anyway, with her sculpted fists).  So that was disappointing.  As it stands, Faora's only accessory is her, errr, stand.  Same shape as the rest, but this time bearing the crest of the house of Ul.  With Faora's slightly smaller stature than the rest of the figures in the line, she actually balances better on the stand than the rest.  So there's that.  But really, a helmet and/or a knife would have gone a long way here. 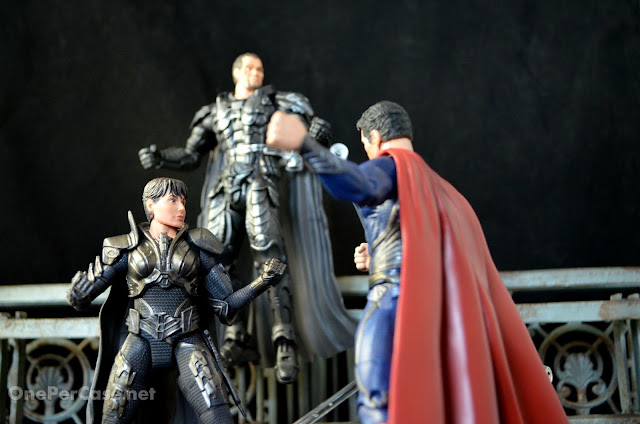 Faora is a nice addition to the line, despite her few shortcomings.  I do wish we'd get a version of her in her armor that she wore before the destruction of Krypton, but that's probably never going to happen, considering she's a female and we're lucky to get even one version of her.  With that in mind, if you're collecting this line, you won't want to pass her up if and when you come across her.  Faora is currently packed one per case in Wave 2 of the line, making her the most short-packed and probably most under-produced figure in the series.  She's already sold out at BBTS.  If you can't find her at retail, you can order her from Amazon, or keep an eye on other online e-tailers. 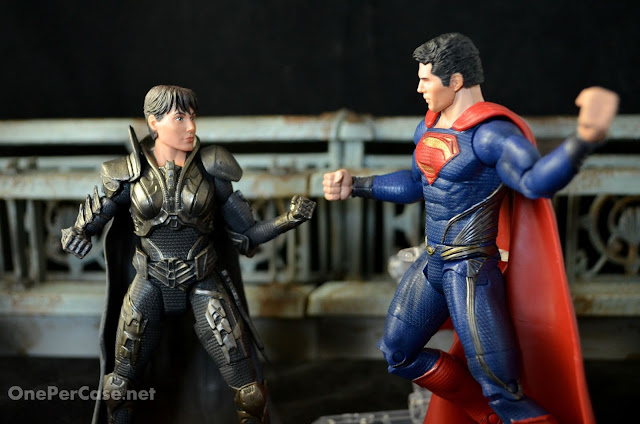 Words, photos, and trying to pronounce "Antje" by Zak
Posted by Zak Sousa at 10:21 PM