I don't typically collect 12-inch scale figures, despite how awesome most of Hot Toys products look.  But I've had the Iron Man Mark VII on pre-order for months now, and once I saw final production photos of Black Widow, she was so impressive that I had to order her, too.  It's like having an actual miniature Scarlett Johansson on my shelf. 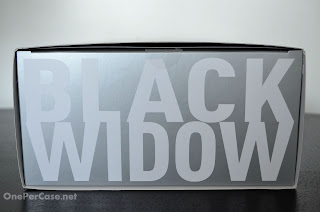 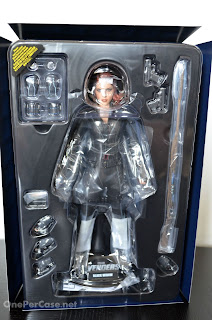 This is actually the first Hot Toys figure I've got, so I wasn't quite sure exactly what to expect when I received the package from BBTS a couple weeks ago (yeah, I've been busy, sue me).  The packaging was really nice, more so than I expected.  The figure came sealed in the outer shipping carton, which was a plain cardboard box, and then the actual product package was sealed in a plastic bag inside the carton.  Inside of that was a two-layer box with an outer sleeve and inner box with everything locked in a plastic tray to showcase the figure and accessories.  The packaging is really nice, and is of the quality that I'll actually keep stored away, in the event that I ever want to put the figure back in it.  It's too nice to throw out. 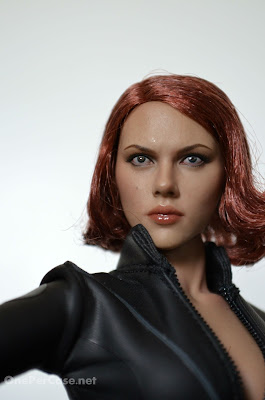 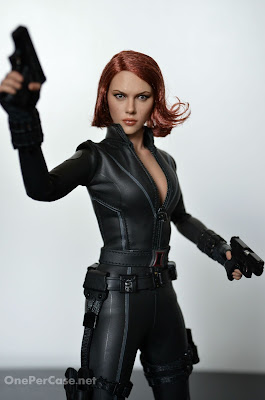 Obviously, the first thing that stands out about the figure is the incredible likeness to Scarlett Johansson.  Seriously.  Wow.  The Hot Toys sculptors have gotten progressively better over the years, but this must be a new high for them.  The sculpt of the face is incredibly detailed, and is a one hundred percent dead-on match for Ms. Johansson.  The paint is equally impressive, and really brings out the detail in the sculpt.  Check out those eyes and lips.  I'm blown away by the accuracy and detail here.  Just wow. 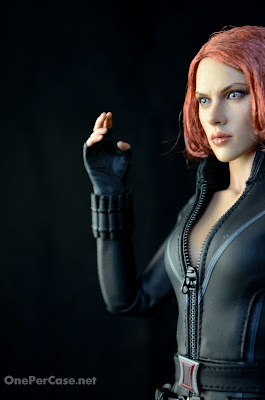 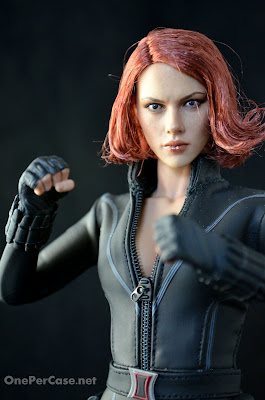 The hair is a little awkward, because it comes with actual hair gel in it.  Out of the box, her hair is pressed in too close to her head.  A little ruffling makes it look better and more natural, but then you get the dried gel flaking and accumulating on her shoulders.  It's a pretty good sign when my only complaint about a figure is that it has dried hair gel flaking off onto its shoulders... 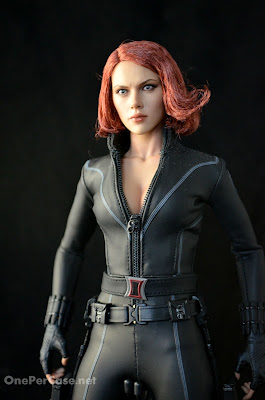 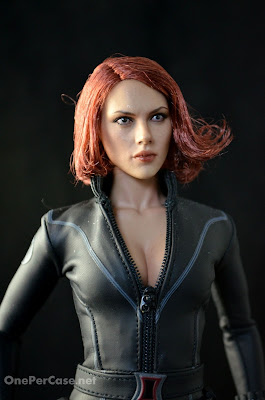 The body of the figure is nicely articulated under the soft-goods body suit.  She apparently sports ball-hinges at the shoulders, elbows, wrists, hips, and ankles, double jointed knees, and ball joints at the neck and upper torso... though the body suit makes it difficult to verify all these joints, and hinders some of them to an extent.  Moving the ankles in the boots is pretty difficult.  Even with that, the range of motion in most of the joints is great, especially in the arms, and she holds some great poses. 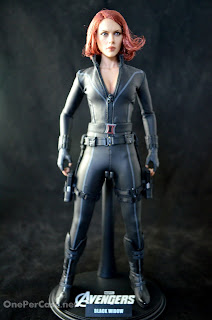 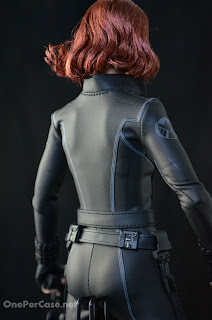 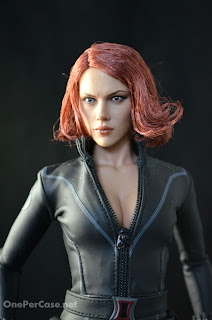 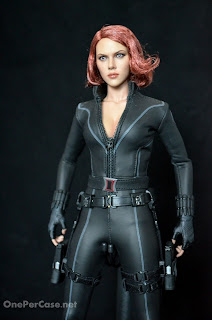 The costume over the body is a really nice quality, too, and looks like an exact miniature replica of the costume worn on screen, complete with grey piping, accurate S.H.I.E.L.D. logos, and a functioning zipper.  The boots, wrist stingers,  gun belt and holsters are all molded plastic, and also look great with tons of detail.  The holster leg straps are actual nylon webbing.  Superb execution on the costume, Hot Toys.

Black Widow also comes with plenty of accessories.  Maybe not quite as many as some Hot Toys figures, but certainly everything you'd hope for from a character who's only notable weapons are guns and wrist bands.  Widow includes eight total hands (one pair of fists, one pair of gun-gripping hands, two different gesturing right hands, and another pair of fists with the electrified "stinger" effect painted on), two pairs of Stingers (normal black and "electrified" blue), two hand guns that fit into the leg holsters, two of the electric shocky disc thingies from Iron Man 2, a Chitauri rifle, and a figure stand with The Avengers logo and Black Widow name plate.  She also includes a couple extra wrist joints, in case they break from switching out hands over time.

The hand guns are especially awesome because they feature an actual spring-loaded slide mechanism, and removable ammo magazines.  You can pull the slide back, see the round from the top of the magazine in the chamber, and let go to watch the slide spring back into place, "cocking" the gun.  I did have one minor problem here, though.  On one of my guns, the slide doesn't stay locked in place, and shoots off the front of the gun from the force of the spring.  Matt also has the same problem with one of his guns.  I suspect a minor defect in one of the molds for this part to be the culprit, but I'm actually not bothered by it.  I put the slide back on and left the spring out, so now I have one gun that can stay in the "cocked back" position, allowing my to leave it displayed as if it were out of ammo, or in the process of being loaded.  So that's kind of cool. 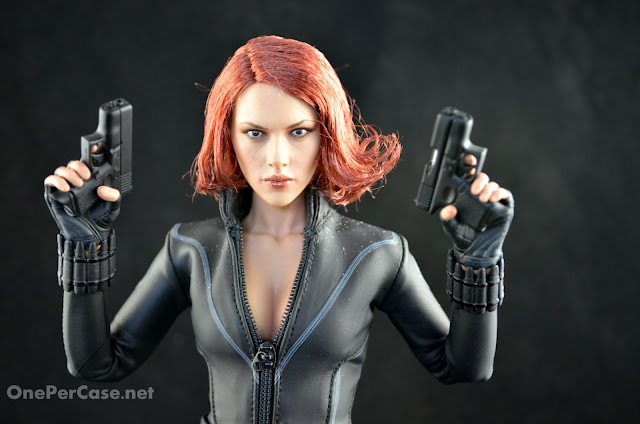 Over all, this is an outstanding figure.  Definitely worth the cost, especially if you were able to get on it before it shop up in price right before release.  I got lucky and ordered mine from BBTS the day before it went from $189.99 to $239.99.  Even at that price, it still sold out, and is going for at least that much on the secondary market now.  And worth every dollar.  The incredible level of detail and authenticity, the great articulation, and the awesome load of accessories all make this an exceptional release.  Getting this figure may have been a bad idea for me, in a sense, because now I want more from Hot Toys.  Outstanding work, Hot Toys crew.  I can't get over how amazing this figure is. 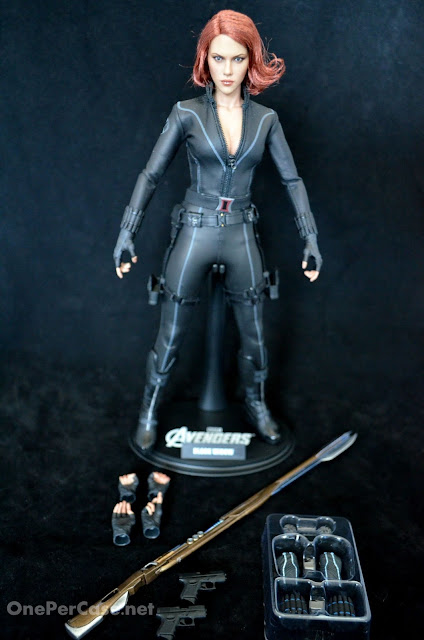 Black Widow is still available from independent sellers on Amazon and eBay.  If you want her, don't wait too long.  This will be a piece that undoubtedly continues to go up in price.

Photos, words, and jaw on the floor by Zak.
Posted by Zak Sousa at 9:21 PM