The Entertainment Earth exclusive is one part dream fulfilled, another part frustratingly disappointing. 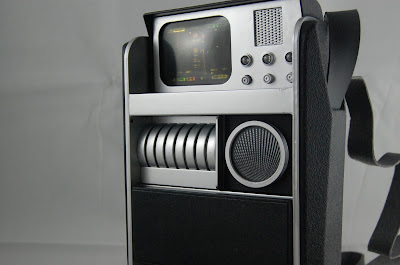 As a lifelong Original Series Trek fan, I appreciate so much of what that series brought to television.  But among the top of them was the Away Party set, that is the Phaser/Communicator/Tricorder set that Captain Kirk, Mr. Spock, and Dr. McCoy used to boldly go where no one had gone before.  But since then, only a few very disappointing replicas have emerged, stunting my childhood fantasies in hoping to own one.  And while it's a durable, flashy-light/sound treasure courtesy of Starfleet and Diamond Select, this version's got a few quality control issues.


Part of the Entertainment Earth exclusive series, this Medical Tricorder arrives in an attractive, yet standard, box.  Looking at the back, we see that the phrase 'Classic Tricorder' is used instead of 'Medical Tricorder,' which is minor especially if you don't plan on keeping the box.  It's just one of those 't's crossed' issues that was an easy fix but was overlooked or ignored for some reason. 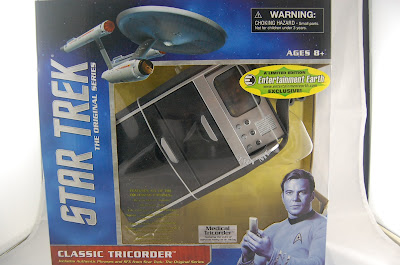 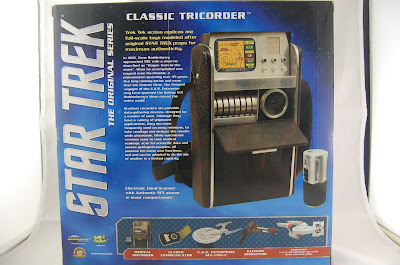 The bottom front of the box shows that several famous phrases from McCoy are available, but you also have two Tricorder effects including a body scan.  However, these cannot access these unless you move a switch deep inside the heart of the machine.  We'll get to this mystery in a moment. 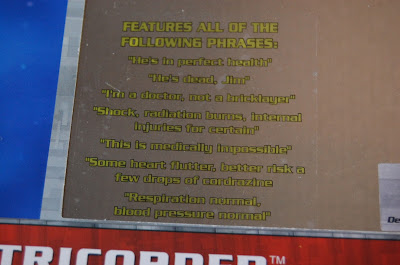 Upon freeing it from its plastic prison, you immediately feel a durable, contoured plastic outer shell.  It's not the flimsy stuff of my youth.  Measuring at 7 1/2" tall, 5" wide, and 2" deep, the Tricorder features three main parts: a flip-up screen, a data storage/audio output in the middle section, and a lower section for storage of the medical scanner and the batteries. 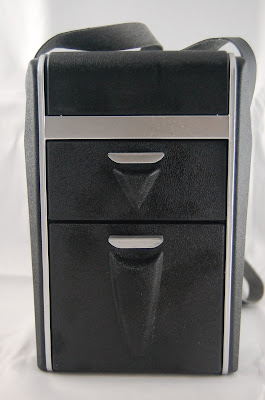 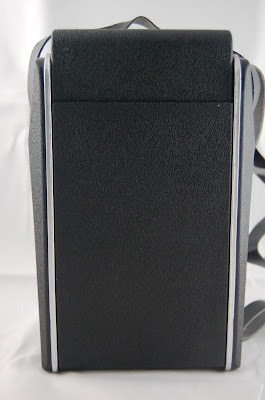 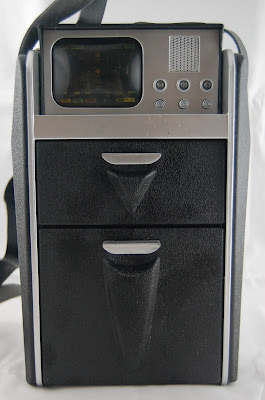 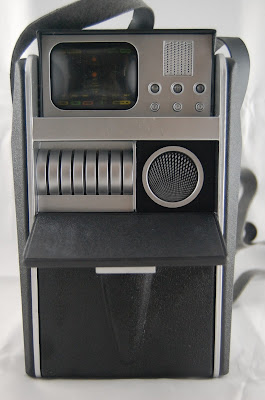 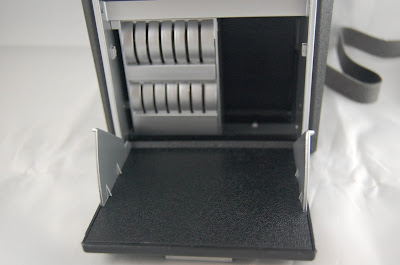 The first compartment is where the sizzle is: you have three LED lights, three pushable buttons, and a light-up but static life sign indicator.  Upon pushing one of the three buttons, you are treated to a variety of voice or sound effects.  The two sound effects will keep running until you hit the corresponding button again.  But as mentioned, none of them will work until you move the switch in the third compartment.  Making this happen isn't easy, but take your time and add three fresh AA batteries while you're there.  Simply pull down the door until it moves past the two plastic pieces, then using a flat-head screwdriver gently pry the data storage piece away to reveal the 'Try Me/Off/Play" switch. 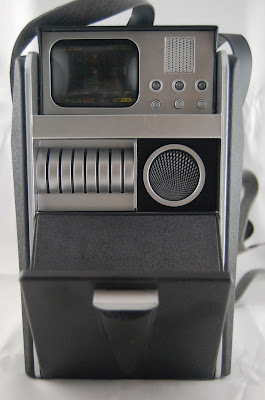 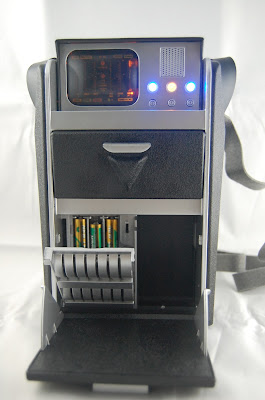 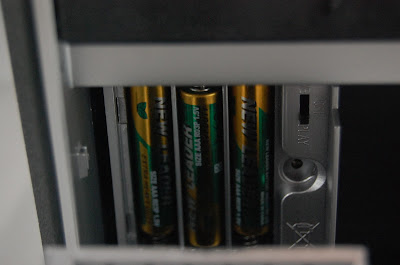 The screen only lights up when a button is pushed, and doesn't move or display new data.  Say what you want about the lack of a real LCD screen, but it does the job adequately.  I think we all would have enjoyed a real working screen, but that by itself would have doubled the price.  The sound clips are actually those of actor DeForest Kelley who played McCoy.  That's a nice feature, along with the two sound effects taken from the show.  The LED lights also flash when a button is pushed and are pretty bright. 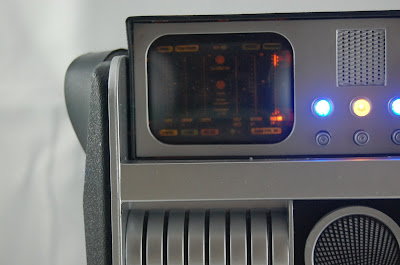 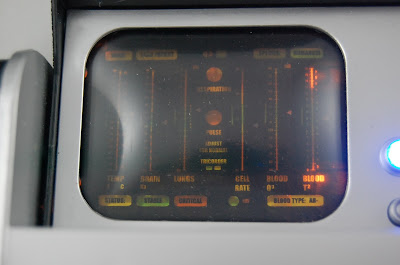 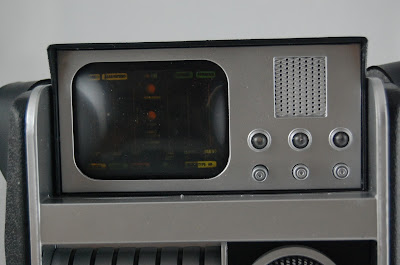 The middle flip door reveals two plastic scultped pieces: a static data storage rack and an audio output.  The speaker does not work but mirrors the speaker on the DST's Communicator.  The door shuts securely and opens with limited effort.  It's nice but unremarkable. 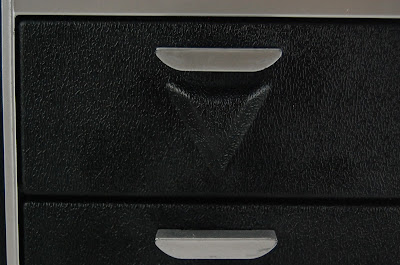 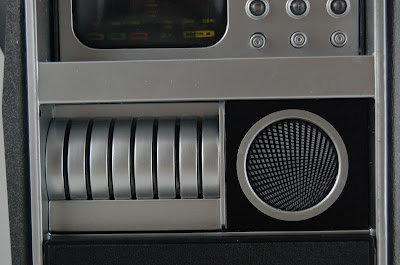 The third compartment features the battery box behind more data discs.  This is where you'll also find the 2 3/4" tall, 1 1/2" round medical scanner, which is the most disappointing feature of the toy.  First, it doesn't match the picture, as the top looks like it's missing.  I've seen different versions on the television show, but the one offered here is too small, as if Diamond forgot to add a cover to it. 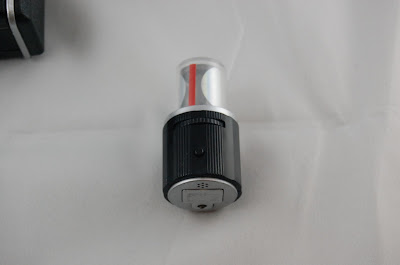 The battery compartment is accessed at the bottom.  Again, add a fresh battery here.  However, the worst part of the scanner, and of the whole setup, is that you must both press the button to activate the sound AND turn a manual wheel to spin the top.  Due to their close proximity to one another, performing this trick  with one hand is virtually impossible - why they didn't include a motorized section is beyond me.  Perhaps the batteries were found to wear down too much?  Or perhaps it's another one of those quality control measures meant to keep the price low.  Either way, it's a frustrating feature that should have been better than what we got. 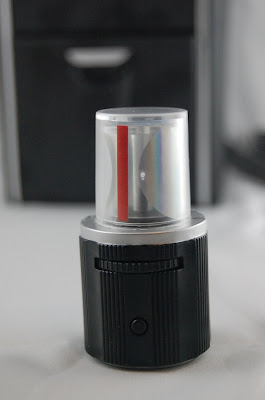 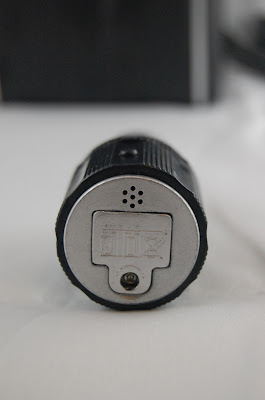 The leatherette strap is suitable for display and does hold the weight of the Tricorder.  I wouldn't take it to work or use it often, as it doesn't look like it can be replaced.  Yes, I know some of you take your toys with you to work. 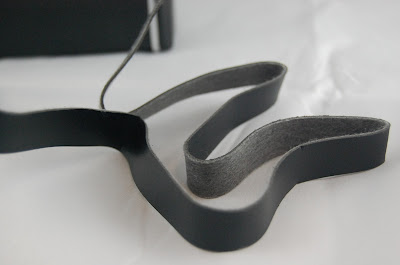 The DST Replica Medical Tricorder is the fulfillment of a childhood dream; whether fans will enter at the $59.99 price point is anyone's guess.  As DST represents the only company to produce a 1/1 replica, I'd suggest you decide how badly you want this one, the standard model, or the geological model.  Its durable design and sound effects are appreciated, but the lack of a motorized scanner and couple of other quality-control touches cloud the value.  Hopefully, this encourages Hot Toys or Sideshow to make a more realistic version; but expect to pay hundreds more when and if it's ever released.  For now, parade this one around  at parties and Bar Mitzvahs for maximum taunting.

It's not perfect, and will most likely keep you dreaming about what could have been. 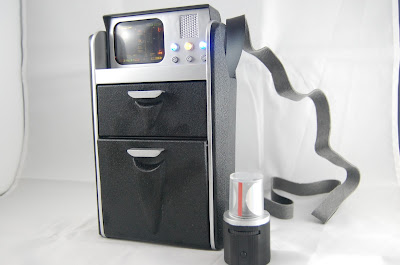 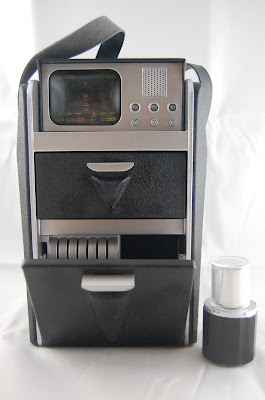 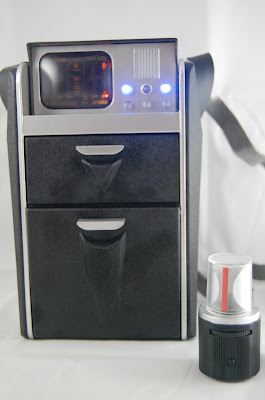 Got thoughts about the Diamond Select Medical Tricorder that we missed?  Comment below - let us know!
Posted by Matt Cummings at 6:30 PM