Does the Diamond Select Star Trek Spock figure boldly go where your wallet wants to go?

I've been a fan of Star Trek: The Original Series for as long as I can remember.  I had the first poseable bridge crew with the turbo lift that sadly disappeared years ago.  Since then, I've been underwhelmed by many of figure releases, which were either poorly made or didn't capture the faces of the greatest Star Trek crew ever assembled (sorry to those of you who think The Next Generation is all that).  I've also been collecting the Marvel Select series from Diamond Select, and have been happy only with the larger scale figures and the recent Thor and Captain America movie lines.

Unfortunately, several quality-control issues plague a Star Trek line that could have been so much more.  Still, it's not a total loss.

The outer casing is attractive enough, except that Captain Kirk is featured in the bottom right corner instead of Mr. Spock.  I do like the Enterprise image in the background.  The back of the card displays both figures for this 'Wave 1' set, with bios of each character.  However, the lack of a proper title for the character is a quality-control issue that could have been easily corrected.  I suspect the decision was a cost-cutting one, which does hurt the appearance of the product for those of you who don't open their figures.

Upon releasing Spock from his plastic prison, we find a booklet behind him advertising other Star Trek products, such as ships and the Land Party Phaser/Tricorder/Communicator set. Between the figure and the booklet is the stand, which is well-detailed and colored.  Unfortunately, you must pose Spock on the diorama - he cannot stand without it.  The only other accessory, the tricorder, is decent enough, although ours has a noticeable paint smudge on the back.

Most of these issues so far are easily forgettable, but here's where things go sideways.  First, the figure cannot be moved below the waist except for the feet which can only be turned left and right.  The knees don't bend, nor the hips.  Above the leg, you can rotate the waist, move elbows, arm sockets, and biceps.  Wrists do not move.  The head will only move left and right, so you must raise the tricorder for Spock to 'look' at it.  Lame.

But that's not all.  Paint application is another killer.  I had to go through several stacks of figures before I could find one without Spock's hair being slightly off, or the area around his ears at hair level missing black paint.  Some versions also had globs of paint on the shoulders, others had skin flakes on the shirt, and some had these AND other issues.  I had seen similar issues in the smaller Marvel Select figures (Wolverine, Cyclops), but not with their big line (Hulk, Abomination, Thing, etc).  The reason for the inconsistency escapes me. 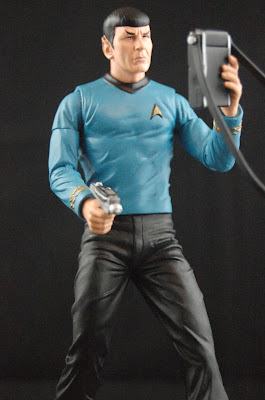 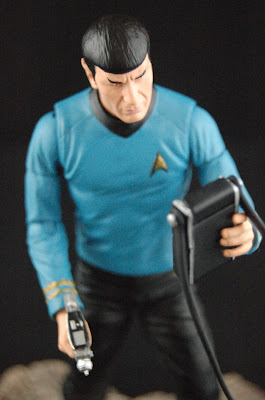 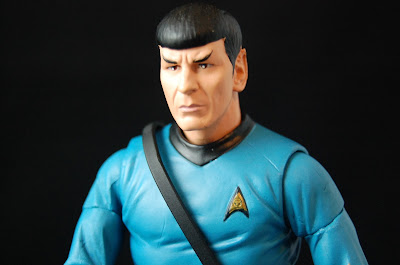 I was happy with several other parts of the figure.  The sculpt is good, as extremities and head seem proportionate.  The wrinkles on Spock's shirt and pants are well done, as is the Starfleet symbol on his chest.  It certainly 'looks' like Spock, unlike that horrible DST Captain Picard - who was that guy?? 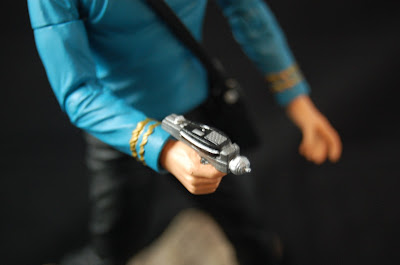 The phaser cannot be removed, but the tricorder can be slung across the shoulder, giving Spock a more action look.  But Phaser 2 looks authentic and is properly shaped for Spock's hand.  Like I said, this figure cannot be posed like Marvel Select figures, which really limits what you can do with this line. They feel more like barely-poseable statuettes with semi-cool diorama stands. 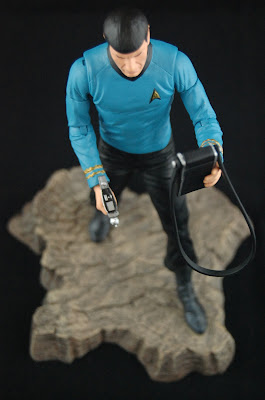 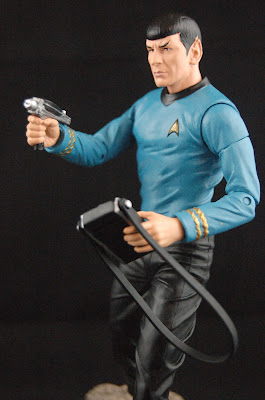 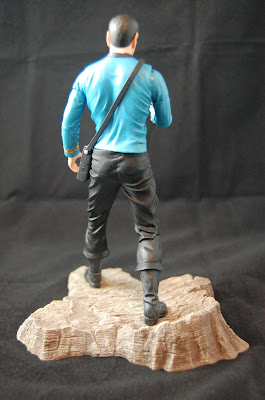 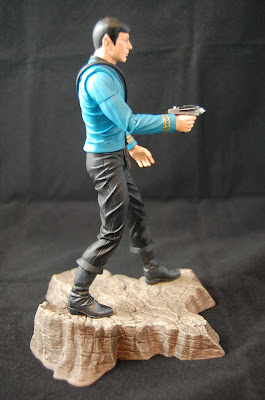 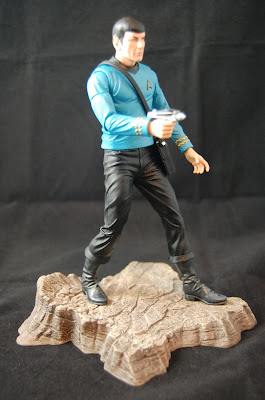 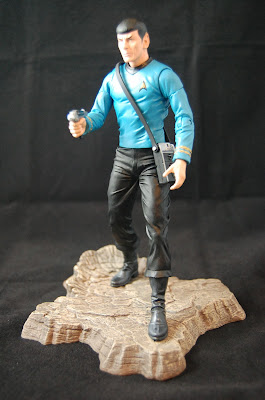 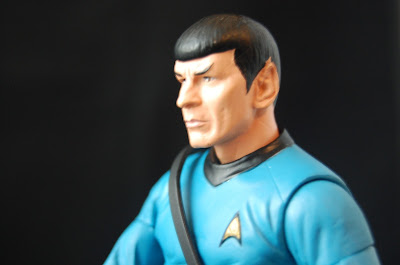 The only reason why I can still recommend this figure is based on price.  Currently set at $15.99 at Toys R Us stores, you're getting a decent figure with paint and poseability issues.  You won't get around the latter, but the previous can be remedied by either combing through the stacks for a good version, or performing some at-home paint application yourself.  If you're looking for perfection at this price, you'll have to look elsewhere.

I hope Diamond Select works to improve this line, although at the time of this review there wasn't word on whether a 'Wave 2' had been commissioned.  This is a better buy for first-time figure builders, as more veteran collectors might turn away from the set entirely.  That would be too bad, because with some minor adjustments, DS's Star Trek line could be a best seller and do very well on the secondary market.

Do you own Diamond Select Mr. Spock?  Comment below and let us know your thoughts on Mr. Pointy Ears!
Posted by Matt Cummings at 10:41 PM