What up peeps. Zak here. Long time, no review. It sucks being a busy adult sometimes. But now that I’m finally all settled into a new house, and finally have my photo studio (and most of my toy collection) unpacked and set up, it’s time to play catch up on some reviews.

Today we’ll look at the final push from the Dark Knight Rises Movie Masters line by Mattel, the slightly delayed and almost forgotten Dark Knight Trilogy Movie Masters Premium Box Set.  It definitely gets the award for longest name ever. It’s a box set of literally nothing but Batman, and very little new tooling. Should you bother?


Personally, I was looking forward to this set after it was announced at Comic Con last year. Yeah, we’ve had a lot of Batman movie figures released already, but something about the movie-specific stands/posters, and the movie-specific costumes/deco of each figure hooked me. 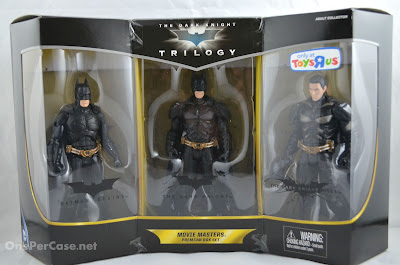 The packaging is strange, but kind of cool. Rather than your typical rectangular window box that you’d expect for a set like this, you get a three-sectioned, non-rectangular, curved design of a window box (I have no idea what geometric term would actually be used to describe this, so let's call it a shapezoid). The figures are all prominently displayed, with the back of each figure’s respective section of the box featuring a mini-bio for Bruce Wayne in that period of the trilogy. 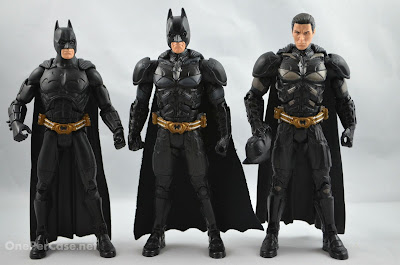 Like I said, the figures themselves are mostly repainted/repacked from prior releases with a small amount of new tooling or paint. 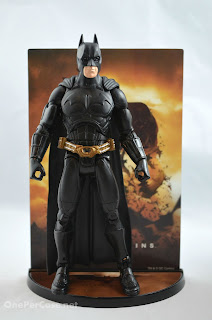 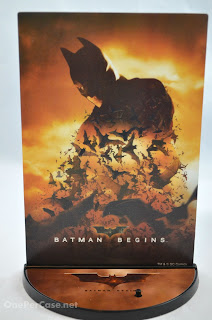 The Batman Begins figure, as far as I can tell, is a straight re-release of the original version of this costume from the Dark Knight Movie Masters line back in 2008. No new tooling. Which means he is still a little under-scaled and short compared to the other Dark Knight and TDKR versions of the character. Shortness aside, it’s a nice figure that does a pretty solid job of capturing the suit’s likeness. Articulation is about what you’d expect from a Mattel figure, so he can hit some decent poses, but nothing spectacular. These figures would have greatly benefitted from rocker ankles.

The paint job is simple and free of any issues (kinda hard to mess up black). My two main gripes with this figure are the terrible molded plastic cape, and the complete lack of accessories. Batman should be able to cloak himself in his cape, or hold it out like a pair of wings and glide on it. That’s kinda the point. Having a static thin section of cape hanging down his back pretty much defeats the purpose. In these comparison shots with the original release of the figure, you’ll see that I added a custom cloth cape to the original version. Having the crappy original cape back in hand just reminds me all over again why I decided to customize mine. The sad thing is, I’ve seen Mattel do some decent cloth capes on Batman in years past. I wish they would have with these figures, as well. 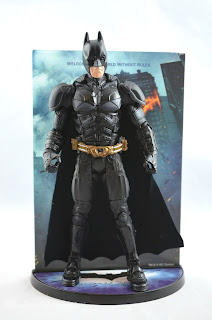 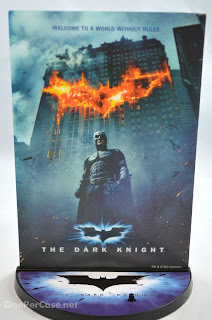 The Dark Knight version of the character is probably the most “new” of the three. The body and paint job are identical to the original Dark Knight release, which was of course re-released unchanged for The Dark Knight Rises, but this version features a new head with extra-potent Christian Bale grimacing action, and a re-use of the craptastic cloth cape seen in the Batman vs. Bane two-pack that was also exclusive to Toys R Us last year (you know, the one with the unexplainable bronze paint scuffs on his suit). The head is cool for some variety (it does drive me a little nuts that ALL these Bale Batman figures have had the same expression since 2008), and every time I look at it, I hear Bale’s voice rasping “I’m Batman” in my head. So that’s a plus. But seriously, this cape sucks. When I say I wish Mattel would start giving Batman figures cloth capes, this is the exact opposite of what I mean. This cape is still basically a bath towel hanging from his back. It doesn’t drape around the figure at all. You can get exactly zero iconic Batman poses out of it. Really, it’s lame.  So again, I customized a Dark Knight with a better cloth cape.

Again, standard Mattel articulation setup on this figure. Nothing new from the original releases. This figure also includes no accessories other than his stand, so the usual disappointment applies here as well. That’s my biggest over-arching complaint with this line as a whole. Would it kill Mattel to throw in a batarang or a grapnel gun with each Batman (or a hand gun with the cops and bad guys)? The SDCC exclusive last year came with two batarangs, the grapnel gun, and the sticky bomb launcher, so Mattel obviously spent the money to tool them up. It’s hugely disappointing that they’re not using them. And this set especially would have been a great avenue to get those accessories back out. 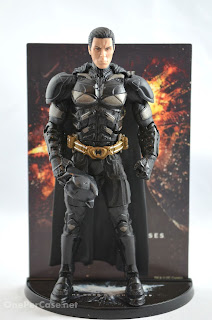 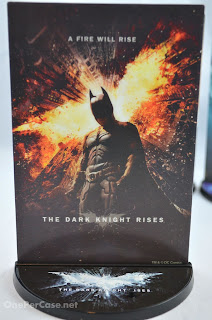 The Dark Knight Rises version of Batman is probably my favorite of this set. He uses the same Dark Knight body, and even includes the same old static molded plastic cape, but he features the unmasked head, and a unique paint job. Mattel gave him light gray dry-brushing on the hair at his temples to make sure you know that this is older Bruce, and his suit also has some lighter gray details than the previous versions. It’s not exactly movie accurate, but I kinda like it. Reminds me more of the color scheme of the costume in the comics. Plus, the unmasked Bruce head looks good and is a welcome re-use. 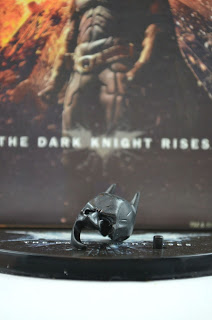 The coolest part of this figure though is his one small piece of new tooling, coming in the form of an accessory: the torn mask, which was probably the most iconic visual of all the marketing for this movie. I’m honestly surprised this wasn’t included with some sort of unmasked Batman variant for the regular release of the figure. The mask is sculpted well and looks pretty close to what we saw on screen. It doesn’t fit on Bruce’s head, but you don’t really need it to. It looks great just sitting on the ground at Bane’s feet. 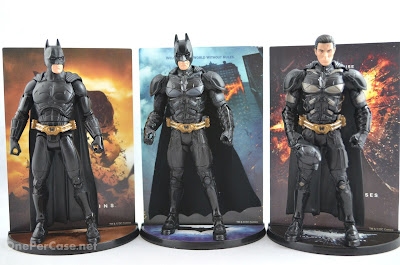 Other than the mask, the thing that really made this set for me were the stands. Each figure includes a plastic semi-circular stand featuring the logo for its respective movie, and a replica movie poster that plugs into the stand to serve as a backdrop for the figure. These posters are made of semi-translucent plastic, and pretty nicely mimic the effect of real light-box movie posters that you see in the theaters. This really ties the set of figures together and makes for a nice display piece. I wish all of the Movie Masters figures included a stand like this. 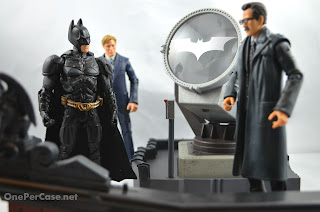 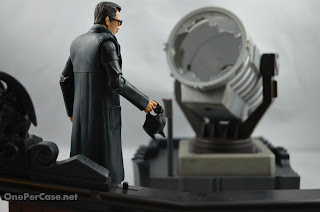 At the $45 price-point and with minimal new tooling, this set might be a hard pill to swallow for some, but the awesome display stands definitely push it a little closer to the “gotta have it” territory. If you’re so inclined, this set can be pretty easily found in a lot of Toys R Us stores right now, or on the TRU website.

Pics, words, and extended periods of awkward silence on One Per Case by Zak
Posted by Zak Sousa at 10:20 PM