Here's the final carded figure (for now?) in the Marvel Legends Iron Man 3 line, and the one that has the least to do with Iron Man, Ultron.  He's a new head on an old body.  But you will read this review anyway.  Because Ultron commands it.

Ultron was a bit of an odd choice for this line, since he's not exactly an Iron Man villain.  And since he's not the classic Ultron that some fanboys were hoping for, the collector-verse seems pretty split down the middle on the verdict for this figure.  But there was a pretty good classic Ultron released in the Marvel Select line not very long ago, so to the butt-hurt fanboys I say "suck it up".  For being a re-use of an old figure with a few new parts, this Ultron is pretty awesome. 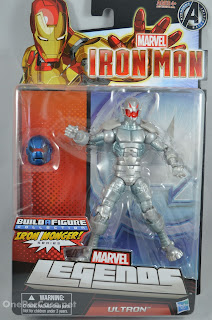 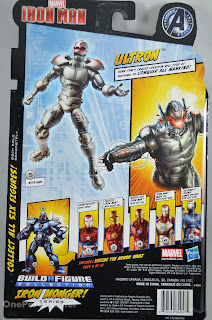 Packaging.  Looks good like the rest of the line, fits in with the regular Legends line, has some cool artwork, a bio so short that it must have been written by a marketing intern with no knowledge of the character, and the normal cross-sell with the rest of the line and the Iron Monger BAF.  Tear that puppy open.  Your robotic AI overlord will not stand to be contained in such a crude prison.

So yeah, considering that this figure is basically the Titanium Man body from the Iron Man Armored Avenger line a couple years ago, with a new head and shoulder pads, it actually looks pretty good for a modern Ultron, though not really accurate to any comic appearance I've seen.  The sculpt has a lot of detail with all of the individual panel lines.  The new head actually looks really good, too.  Much better than the Select version, in my opinion.  And light years beyond ToyBiz's old "Robotic Easter Bunny of Death" version. 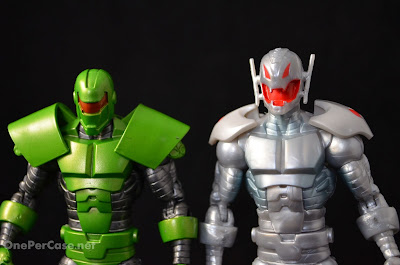 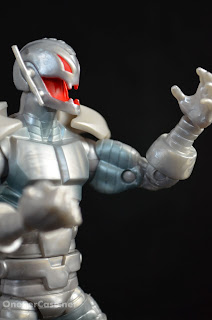 The articulation is pretty basic for the Legends line, but lacks rocker ankles sadly.  It does have a ball-socket and hinged head, ball hinged shoulders, hips, ankles and wrists, double hinged elbows and knees, swivels at the waist, biceps, and thighs, and an ab-crunch. 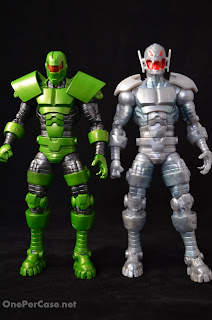 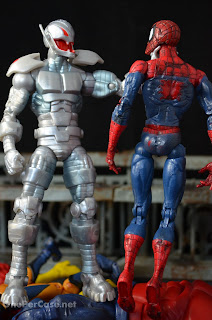 The deco is... interesting.  I was hoping for a figure painted silver, but Hasbro actually went the same route they did with some of the other figures in this line and cast the figure in slightly-metallic marbled looking plastic.  He has a slight blue over-spray in some areas to give him depth, and this adds to the almost-metallic effect.  The only other paint is the red on the face and shoulder pads, so the minimal paint is pretty much free of defects.  This should make it easy to find a good one.  I would still rather have seen this figure painted silver, but I'm not unhappy with how he looks now. 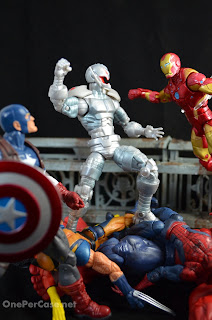 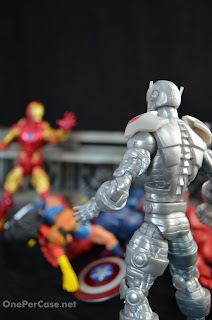 Ultron includes no accessories aside from Iron Monger's head, which is the smallest piece of the BAF, so the package feels a little light.  It would have been nice to see another accessory included.  Either a stand or some sort of weapon, or something.  As it is, between the minimal deco and the lack of accessories, it doesn't feel like you're getting as much for your money as with the other figures in the line. 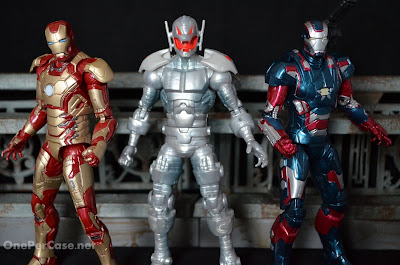 But that's not to say that Ultron isn't worth picking up.  If you want to complete Iron Monger, he's a necessity.  Even if you don't care about completing Iron Monger (are you crazy?), he's a worthy addition to the Legends line... even if he doesn't quite make sense in the Iron Man movie tie-in series.  Ultron is packed two per case (compared to three each of Mark 42 and Patriot), so don't wait too long to grab him, or your Monger might have to do without a head (and that didn't work too well for him in the comics).  This wave is hitting retail now, and is available at BBTS (though Ultron is not available individually, due to his relatively short-packed status). 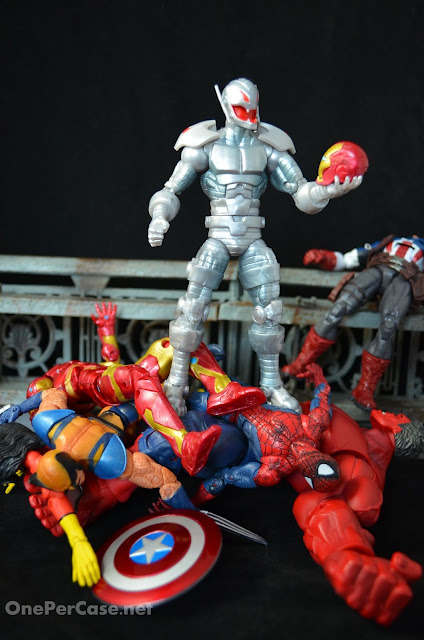