Iron Man 3 opened in North American theaters last night, and the second wave of Hasbro's Iron Man 3 Marvel Legends line started hitting US retail shelves the same week.  Good timing, Hasbro.  In appreciation of the new movie (it was awesome), we'll start off this round of updates with the film's star armor, the Mark 42. 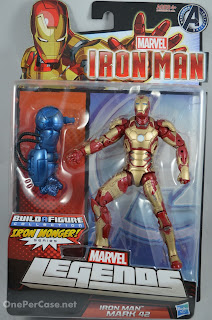 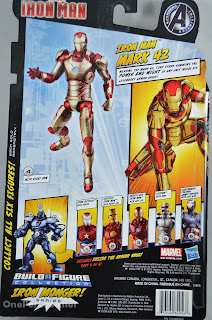 Just like the first wave of this line, this second wave comes on a card back very similar to the standard Legends line, but with the addition of some super sweet Iron Man art.  I like it.  The drawing of the Mark 42 seems to pop right off the card.  And once again, on the back we get a short one-line mini bio and some more character art, plus the cross sell for the other figures (now with all 6 shown), plus the Iron Monger build a figure.

The figure is a faithful representation of the new armor on-screen, which means a 100% new sculpt.  This is actually a really intricate sculpt, with a lot of detail throughout, most of it being very small.  There are a ton of panel lines and geometric edges.  This is definitely the most complex looking movie armor yet, and Hasbro has done a nice job of capturing all the detail in plastic.  My only gripe with the sculpt, is that that the figure is noticeably taller than previous movie armors in this scale from Hasbro.  I'm all for a slightly larger Iron Man that looks like it could actually be a guy in a suit, but it causes a slight problem when posed next to the prior figures.

The articulation is also pretty impressive, including all the modern points of articulation that we've come to expect on a Hasbro Marvel Legends figure, which allow for the figure to hit some decent poses.  We've got a ball jointed head with a vertical neck hinge (important for flying poses), a ball jointed torso, ball-hinged shoulders with bicep swivels, double-hinged elbows, ball-hinged wrists, ball-hinged hips with thigh swivels, double-hinged knees, and ball-hinged ankles with rockers.  These POA's are pretty nicely hidden in the sculpt, as well.  None of them stand out or look awkward.  The knees especially blend in with the sculpt.  My one complaint with the articulation, is that the armor panels on the back of the hands make it impossible to bend the wrist back for repulsor blast poses.  All Iron Man figures should be able to make that pose, but few can.

The paint is just a little sloppy on all of the samples I've seen in person.  There are a few smudged lines and slightly out of place applications, but nothing super noticeable.  With all the sculpted detail, I imagine it will be pretty impossible to find a perfect paint job on this figure.  So just look through a few if you can and pick the cleanest one.

Other than the few minor paint mistakes, the deco is pretty nice.  The gold is mostly smooth, and suitably metallic.  It's a close match to the on-screen color.  The red is a bit plain, but has a slight metallic sheen in some light.  And then there are the small gray metallic details in the torso and legs.  This little detail gives the suit a lot more depth.  I approve.  The eyes are a little bluer than I would have liked, but they don't look bad.  A little bit of white in the centers would have given a nice glowing effect.  The Arc Reactor does achieve this effect, but is unfortunately just slightly off-centered in all the samples I've seen.  It's barely noticeable, though. 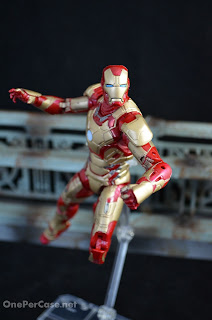 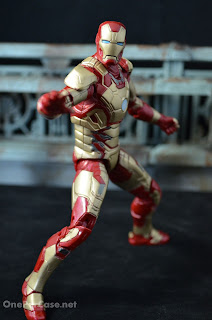 The only "accessory" included with the figure is Iron Monger's right arm.  Iron Man isn't a character that really requires any certain accessories, but it would have been nice to get a swapable Tony Stark head and/or some alternate hands, like some of the Iron Man 2 Legends figures.  The BAF is a more than acceptable substitute, though.

Mark 42 is a suit that I didn't really like when it was first unveiled at Comic Con last year, but the design has actually grown on me quite a bit since then, especially after seeing it on the big screen.  This figure is a great representation of that design, and is definitely one of Hasbro's nicest movie figures to date.  As such, he's worth picking up even if you're not after the BAF piece.  He can be found now hitting shelves at Target and other retailers, and is also available at BBTS. 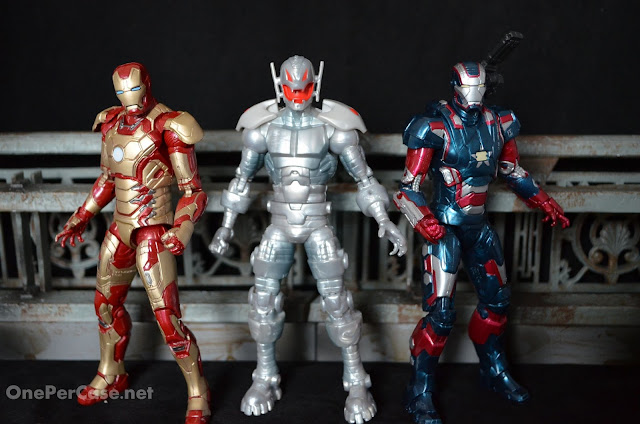 Words and photos by Zak
Posted by Zak Sousa at 11:40 PM