We had to wait through two separate waves, a few months apart, to complete him.  Now, one of the most awesome Build-a-Figure's of all time is complete.  Check him out after the jump.


As soon as I opened the first figure from the first wave of Iron Man 3 Marvel Legends and held this guy's leg in my hand, I knew he was going to be one of the most epic Build-a-Figures Hasbro had done to date.  And now that he's completed, he does not disappoint. 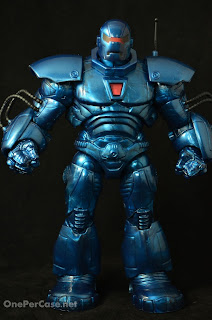 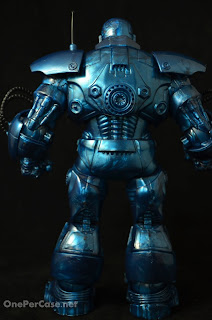 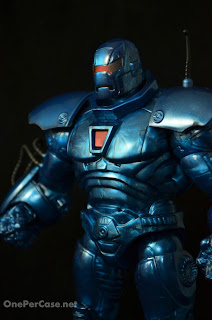 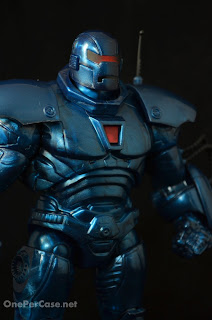 Iron Monger is essentially a 2-up of the 4" Iron Man 2 comic series Iron Monger figure from a few years ago.  Looking at the two side by side, you can tell that they're both from the same digital sculpt/CAD file.  It's a beautiful sculpt.  Lots of details throughout, and very comic accurate.  In that Iron Man 2 line, this figure was given some new parts and re-used for Hulk Buster.  Rumor is that the same thing may happen for a yet-to-be-confirmed second round of Iron Man 3 Legends (seemingly further supported by the recently revealed Mandarin figure).  I'd love to see that happen, so I'm keeping my fingers crossed. 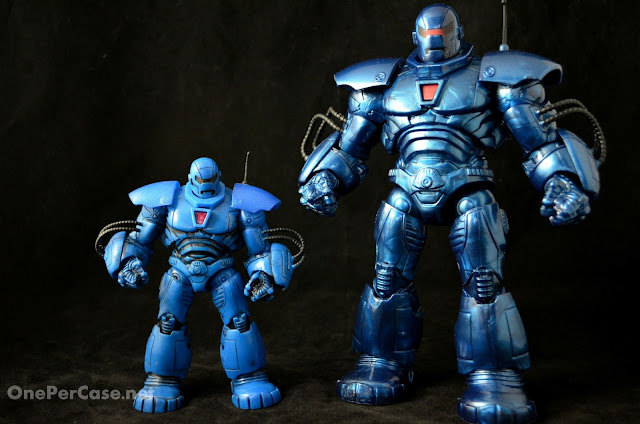 ﻿
The entire figure is cast from high-gloss, cobalt blue plastic, with almost no paint.  The plastic has the same marbled effect as most of the other figures in this line.  It's a new look for Hasbro's figures, but it looks good in it's own way, and it works really well for Iron Monger.  The blue really stands out.  You can put this guy on a shelf full of dozens of figures, and your eye will still be drawn instantly to him. 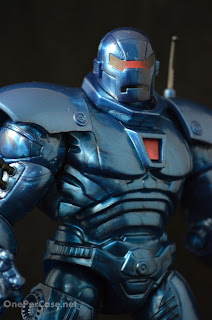 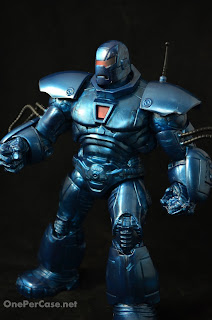 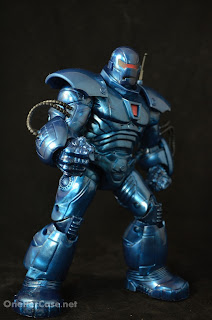 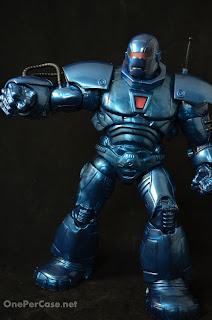 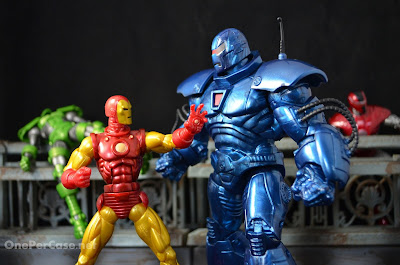 Aside from the cast blue plastic, and a tiny bit of black paint on the arm hoses, mouth, and antenna, the only other deco is the red for the arc reactor and visor.  These pieces are applied cleanly with no mistakes in the ones I've seen.  To be fair, there's not a lot to mess up, though.  But that's not neccessarily a bad thing.  Iron Monger is simplistic in his coloration in the comics, so the figure looks spot on. 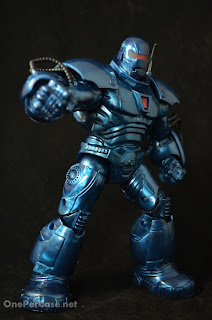 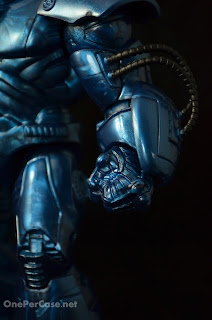 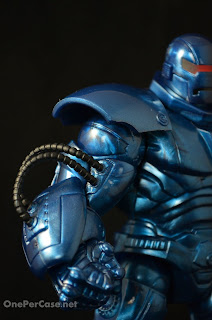 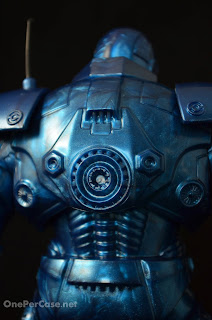 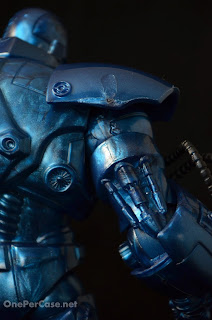 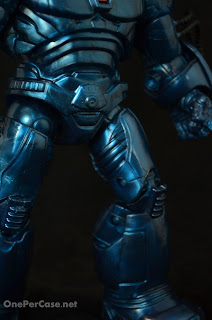 Articulation is pretty standard, other than some missing bicep swivels, but the figure's bulkiness and design inhibits a lot of range of motion.  That's fine honestly, since Iron Monger is supposed to look big and imposing, not lithe and agile.  He does include a ball socket head, ball jointed torso, ball-hinged shoulders, elbows, hips and ankles, swivels at the wrists and thighs, and double hinged knees.  The only thing that would make the articulation better, would be if he could hold his hand (preferably an alternate, open, repulsor-blasting hand) up to his own head to re-create his death scene. 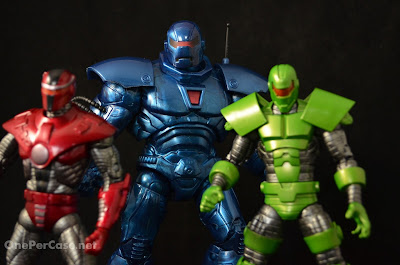 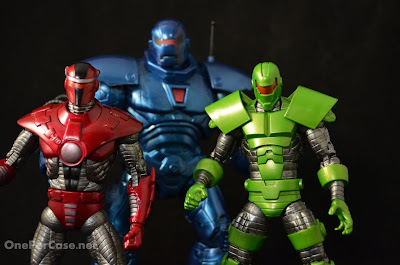 Even if you're not a fan of all the figures in the Iron Man 3 line, this BAF makes the purchases completely worth it.  He really is the highlight of the entire line, and possibly, of the entire year for Marvel Legends.  Considering that the rest of our BAFs this year are tiny, this massive 8" figure seems like an even better bonus.  If you're an Iron Man fan, he's an essential villain, but even if you're not, he's still an amazing figure.  You owe it to yourself to add him to your collection.  The final three figures needed to build him are hitting retail now, and all of the figures in this line can be ordered from BBTS. 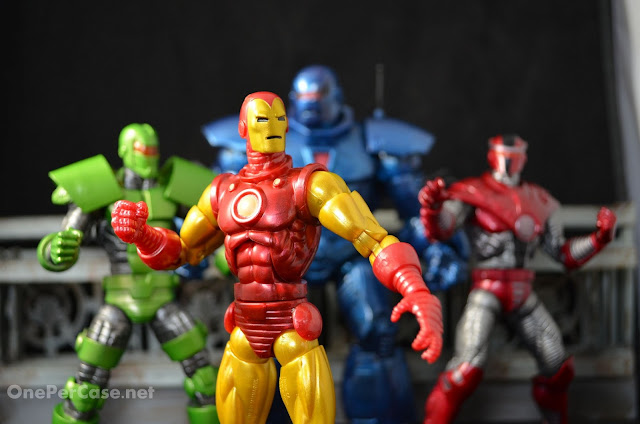 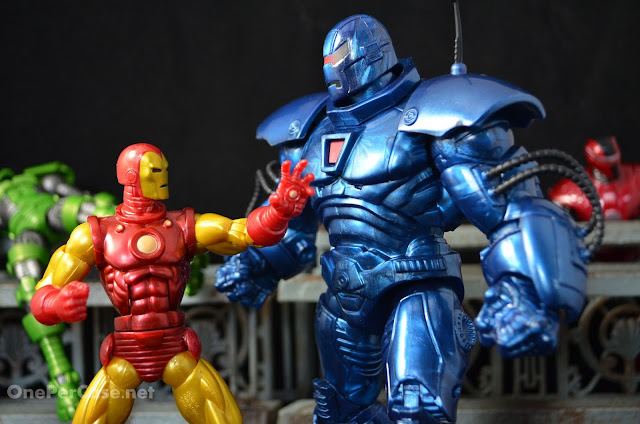 Words, photos, and iron mongering by Zak
Posted by Zak Sousa at 8:27 PM