Hyperion is an old school character from the early days of the Avengers. Once again, not a top-tier character, but he’s back in the pages of the Avengers, and now he’s making an appearance in the resurrected Marvel Legends line. Is it worth the dough to add another guy with a cape to your collection? Read the review and all will be revealed!

Do you want pistols and arms for your Hit Monkey? Well here’s where you’ll find them. Well, now that you look at the package, it seems like you might find them with Sentry also. Once again we’ve got dual packaging. Hyperion and Sentry are the “Conquering Heroes” that you have to choose from in this wave. As usual, cool artwork, so the packaging should satisfy you carded collectors. 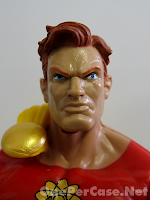 Hyperion is one angry looking guy. The face sculpt is well done, and that look on his face definitely screams “conquering hero”. The colors on the figure are vibrant, and they look very representative of how Hyperion appears in the comics. One hand open, one in a fist, he’s ready to fight. 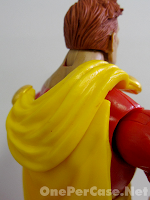 Looking at his torso, you can see that he’s got the normal Marvel Legends articulation, which should be plenty. One point of note is the head/neck. These days, some lines feature winged/caped characters with minimal movement for the head. As a result, they can look forward in hover mode, but actually flying anywhere would be a game of blind man’s bluff. Hyperion, thankfully, features good movement in the neck, so he can actually see where he’s going. His cape is actually two pieces (full cape and “cowl” portion) which helps with posing. 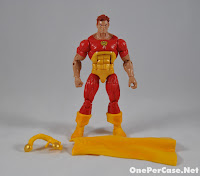 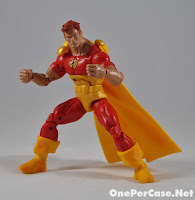 Speaking of that cape, I guess that and the Hit Monkey pieces are about all you could remotely count as accessories here. Well, it’s Hyperion. It would be odd to pack him with a gun, sword or other weapon. A packed in flight stand would be nice, but we all know that ain’t gonna happen. 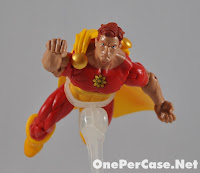 Over all, it’s another solid delivery from Hasbro’s Marvel Legends. If you want arms for your Hit Monkey, it’s going to be Hyperion or Sentry for you (or both) so take your pick. Either way, you’re going to end up with a well-made caped conqueror on your shelf.