Who doesn’t love getting something for nothing? Ok, not exactly “nothing in this case, but the Build-a-Figure concept essentially rewards loyal collectors with a free figure, and that’s not too shabby. If you buy enough of the latest Marvel Legends, you’ll be able to slap together your very own Hit Monkey. Should you buy extra figures just to build a simian assassin? Check the pictures, read the review and decide for yourself. 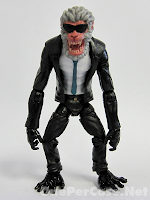 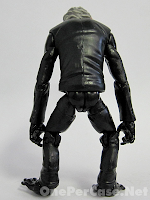 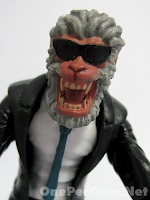 If you haven’t picked up a comic in the past few years, you may be asking yourself “Who is this Hit Monkey chap?” Well, pretty easy to figure out the basics, so how about a few specifics. He’s a Japanese Macaque that learned the ways of the assassin by watching an assassin train while he was nursing back to health. No real surprise that he finds himself involved with Deadpool. Anyways, the packaging is an easy review on this one. There isn’t any. He’s a build-a-figure (sometimes known as collect-and-connect). 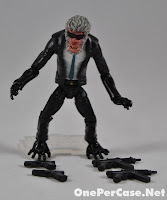 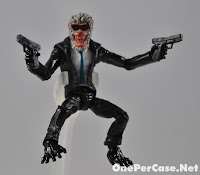 It’s tough to gripe about the sculpt on a free figure, especially when the figure looks as nice as Hit Monkey. He’s a monkey in a suit with sunglasses. Every girl’s crazy ‘bout a sharp dressed monkey. His arms are longer than his legs, his feet look more like hands than feet. In other words, he’s a monkey. The head-sculpt, well, I just can’t help but think of Ron Perlman for some reason. He’s got shades, fangs and a whole lot of anger. He’s what you would expect from a monkey trained to be a killer. Good to go. 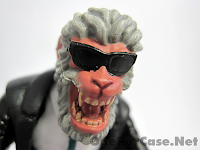 Assuming you’ve got all the parts, you’ve got two sets of guns to choose from. Both the pistols and the SMGs are black and adequately detailed. Best of all, they fit in his hands and they stay in his hands. That’s what ultimately matters most in an accessory, so you can check this section of as “mission accomplished”. Frankly, I think the fact that we get two sets of guns is an added bonus, particularly in this day and age of cost-cutting. 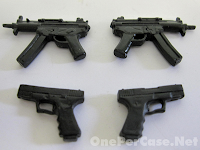 Finally, there is something to say other than “standard Marvel Legends articulation.” Well, he’s  not your standard Marvel Legends figure. Not as many points as other figures, but still plenty of movement. The feet are a little funky, which can make it tricky to get Hit Monkey to stand, but if you pose him right, it’s do-able. Essentially you have to pose him like, well, a monkey. Make him lean a little forward and hunch over a bit and you’ll be good to go. 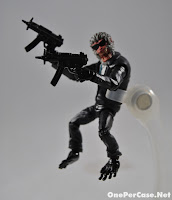 In the end, Hit Monkey turned out nice and is a fun bonus for those who purchased enough figures to build him. A fun character sure, but I don’t know that I would go out of my way (i.e. buy figures I wouldn’t have purchased otherwise) to build him. Then again, you can always keep the pieces you need and sell off the loose figures, if you’re so inclined. 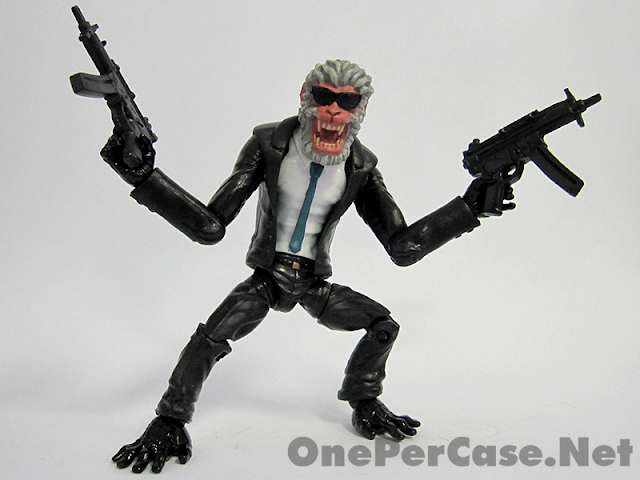