Hey everybody! Joe here with another Review From My Desk. Today, we're going to take a look at the Transformers Prime - Beast Hunters - Commander scale Optimus Prime. I figured since this guy is a little on the smaller side, he wouldn't need as much attention as his larger counterpart, so, I took him to work and tore into him there.

Is this little 'Commander' worth the hunt to you, or is he just a catch and release? Take a peek after the jump.

This little Optimus and his Voager scale counterpart are our first look at what form Optimus will take in the 3rd (and reportedly final season) of Transformers: Prime. Optimus, with the rest of the Autobots gets an upgrade to help in the battle against Megatron's new Predacons. Optimus in particular goes from Mack truck to Monster truck. As of yet, we've only seen the animated form of Predaking with a handful of Autobots only being seen in toy form. You can still catch the trailer for Season 3, Predaking Emerges!, over at TFormers.com, HERE.

This new, bulked up Optimus comes carded on the new standard card for the Beast Hunters line. The card is primarily white with the TF:Prime logo and the added Beast Hunters logo in bright yellows and oranges. There is a great picture of Predaking in the upper left corner. Sadly, it appears that all of the Beast Hunter cards and boxes have the Predaking image and no individual character art, unlike the Generations line.

Optimus is packed in Bot-mode so we do get the standard Alt-mode shot on the card insert. The back of the card gives us a brief Bio, a few notes about accessories, and some art from the show at the bottom. 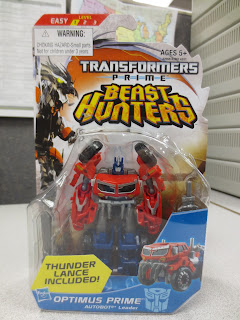 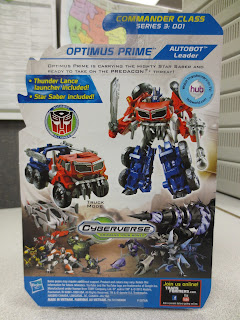 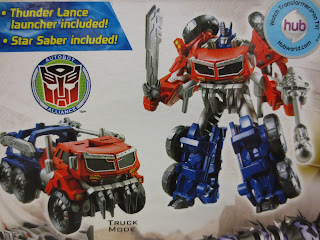 On the front of the card, there is a note showing that there is a "FILE CARD INCLUDED!". This file card is really just a Tech-Spec that is attached to the bubble insert. If you want to keep it, separate it from the insert via the perforation. 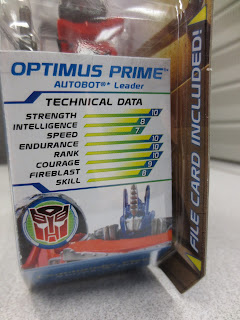 Free little Optimus from his bubble prison and we have a plastic tray, some of those clear rubber band ties, and instructions folded underneath. 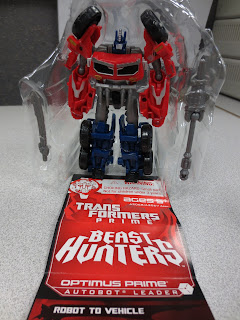 Since Optimus is a Commander scale figure, his transformation is fairly simple. 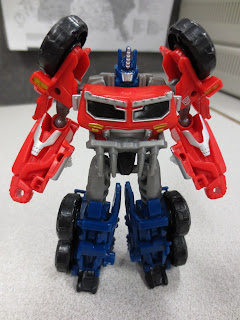 Fold Optimus' head back and rotate his arms at the elbows to face backwards. The body is on two hinges, extend those all the way 'up'. Rotate the body 180 degrees and swing the arms out. The arms fold up and connect into the cab with the hands facing the rear of the Alt-mode. 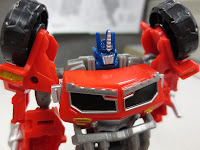 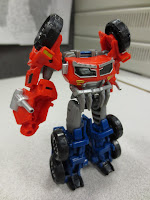 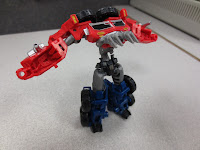 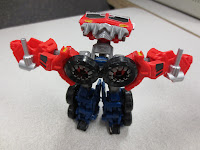 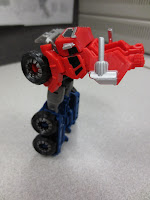 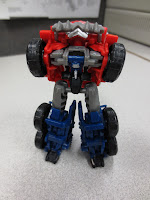 Unfold the cage like parts from the inside of the legs. Fold the feet in. Snap the legs together rotate and seat the cab down. That's pretty much it. Optimus has taken on the form of a much larger, beefier truck as compared to his normal extended nose semi. 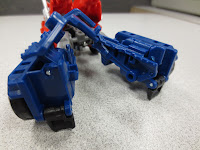 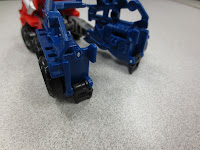 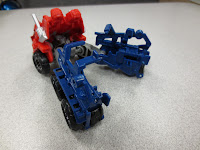 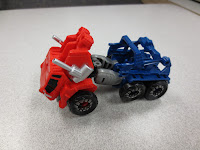 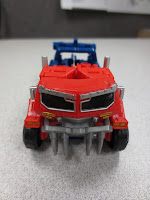 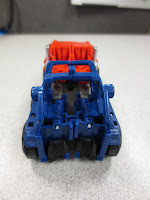 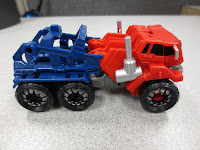 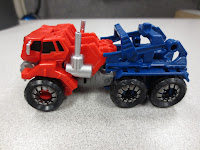 Optimus comes with 2 weapons packed in with him. We get an undersized Star Saber and what the package tells us is a 'Thunder Lance". The Thunder Lance is a spring-less shooty accessory it's fairly 'meh' in my opinion. Both weapons can be wielded by or pegged onto Optimus in either Bot or Alt-mode. 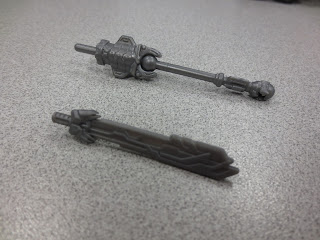 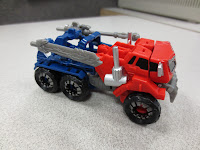 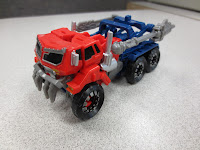 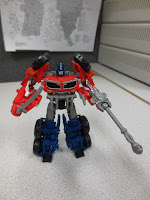 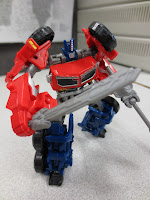 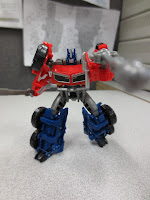 All in all... it's Optimus... so I had to buy it. I'm not too keen on the Commander Class figures when, for a few dollars more, I can get a Deluxe figure that is a lot more involved. None-the-less, this little Optimus will still find a place on a shelf in my Optimus Collection. If you like these smaller scale figures, he's not a bad buy. If you don't need an Optimus and the Commander scale figures do nothing for you, then you can surely pass on this one.


Pics, words and questions of scale by Scion of Primus.