When Marvel Universe Series 4 (WTF?) was announced, a lot of people were most excited about Nova. The strong rumor is that Nova will make an appearance in the upcoming Guardians of the Galaxy movie. If true, it would make sense to get him out in 3 ¾” form. Some might say that the NovaCorps are basically a rip-off of the Green Lantern Corps. Well to you, I say… yea. So does this figure live up to expectations? Read on to find out. 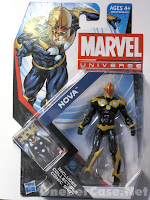 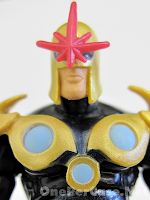 You’ve seen one Marvel Universe package, you’ve seen them all. Really, the card hasn’t changed a whole lot since the line started. Good artwork, preview figures on the back, etc. Nothing blow you out of the water amazing here, but a good looking cardback. Why is he Nova and not “Marvel’s Nova”? Either Hasbro got lucky, or Nova was a name Marvel actually bothered to protect. In the end, we’re not getting stands packed in any more, so it doesn’t really matter either way. 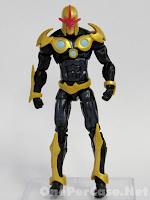 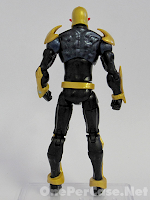 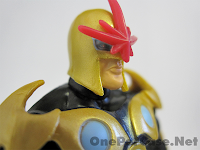 Being the way that I am, I would have preferred a more vintage look to Nova. The more modern look is just fine in the comics, but frankly, it’s a little odd when put into three dimensions, at least the way it’s done in the Marvel Universe line. The head sculpt is ok, but to me it comes off as a little cartoony, not comic-y. I know, seems like semantics, right? But think of a Marvel Universe Wolverine vs. a Wolverine and the X-Men Wolverine. Other than that, it’s a fine looking head sculpt. 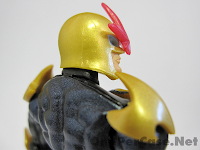 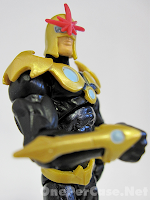 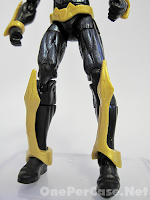 The body sculpt is where the character design gets funky for me. The body itself is more or less a form-fitting suit that looks just fine. The add-ons are where it gets a bit wonky. The belt and the shoulder guards aren’t too bad. The leg and arm guards, yea… they just don’t do it for me. They look fine when he’s standing, but when you bend his knees, he looks like he has strange leg daggers. Similar issue with the elbows and arm guards, although less awkward. Could have been avoided going with the late 70s-early 80s Novalook. 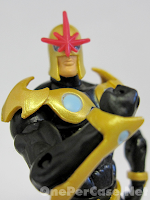 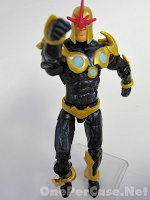 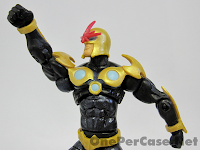 Nova has all the articulation you would expect from a male figure in the Marvel Universe line. Lots of movement, which is almost always a good thing. Once again though, those add on pieces like the shoulder pads limit his movement a little bit. Not too bad, but enough to note. 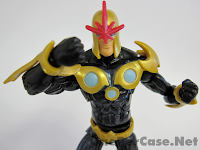 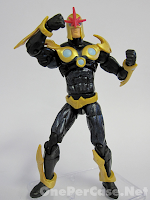 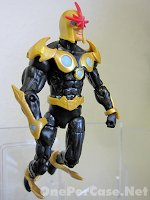 The biggest movement issue I have is with the head. The back of the helmet makes it so he can’t look up much (if at all), or look forward when he’s flying. I guess looking where you’re going probably doesn’t matter that much when you’re flying in hyperspace, right? But then again… 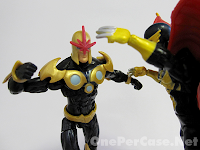 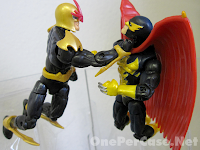 If you’re looking for the hyped up figure that Nova was, you might be a little disappointed with the figure. I think for me, I just can’t get past the fact that I would much rather have the original outfit. I’ll be keeping my fingers crossed for a comic-pack with yet another Spidey, which isn’t that far-fetched given Hasbro’s track record of such things. In the meantime, if you like modern Nova, you’ll probably dig this guy enough to make it worth picking him up. 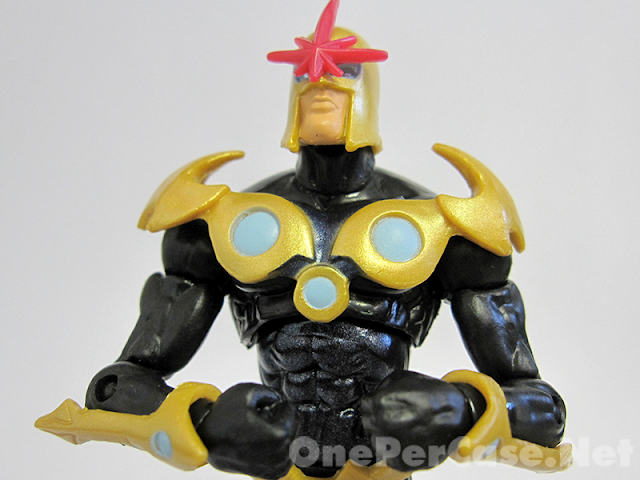