Today, we’ll take a look at another of the latest Marvel Universe team packs, the Avengers West Coast. Or as I like to call them, Avengers on vacation. We get two repaints and a new character. Check them out after the jump. 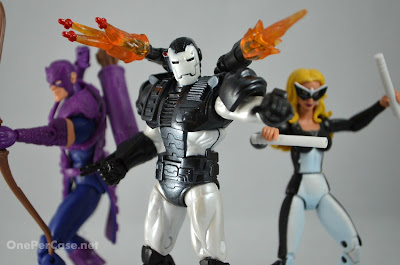 The packaging for these team packs is pretty good. We get a nice window box with the figures prominently displayed, and the respective team’s unique logo, along with some pretty good character art. Interestingly, the team name is inaccurate on the box.  The official name for this team is "Avengers West Coast", not the "West Coast Avengers".  This set doesn’t include many new characters, like collectors had hoped when it was surprise-announced by BBTS a few months ago (a lot of folks were hoping for Tigra), but it does include some re-do’s of a couple pretty popular characters. Who doesn’t love Hawkeye and War Machine?

Hawkeye is basically a repaint of the Secret Wars comic pack/Walmart Avengers Collection version, but now with the one sleeve arm from the Dark Hawkeye figure. So he’s a minor kit bash. The sculpt and articulation are decent, but are obviously from the early days of the MU line. This is a figure that I wouldn’t mind seeing re-done on the Rogers/Cyclops body. 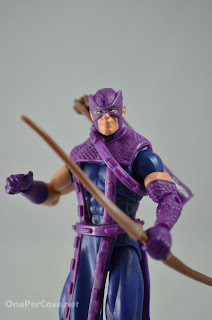 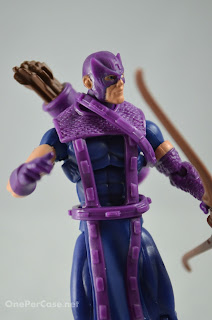 The paint is pretty well applied, except for the face. Both sets in my case had messed up paint on Clint’s mug. This was the better of the two. Hasbro’s quality control definitely took a nose dive on these most recent figures. Trying to find a figure without some jacked up deco is like trying to find a needle in a haystack lately.

Barton comes with his customary bow, arrow and quiver. More accessories than most figures in this line, so I can’t complain too much, but I would really like to see a few different trick arrows included with Hawkeye, and I’d also really like to be able to actually store them in his quiver, since getting him to actually hold them in any sort of realistic manner can be quite a pain. 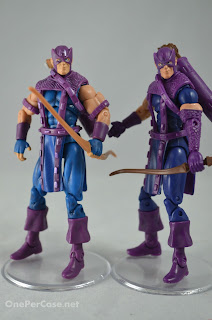 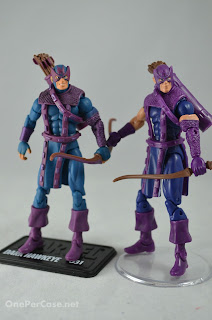 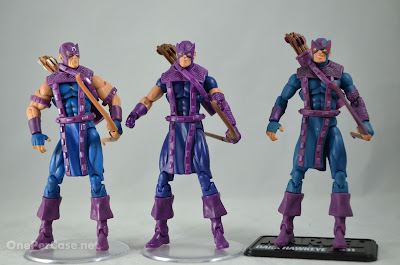 So over all, Hawkeye… not bad. Nice to have a slightly different version of him for some display variety. And this one almost passes for a Heroic Age Hawkeye. So I dig him. Just need to clean up the face a bit.

War Machine is the other repaint in the set, originally appearing in the Iron Man 2 line’s comic series. Truth be told, this is an awesome figure and probably my favorite in the set, if not for the white paint representing what should be silver. Hasbro did this same thing with the comic pack version of Silver Centurion, so I guess they kind of match, but still. I would have much preferred actual silver paint. As it stands, the original version of this figure has the better deco. And then on top of that, mine also has some splotchy paint, and a chip in the face. 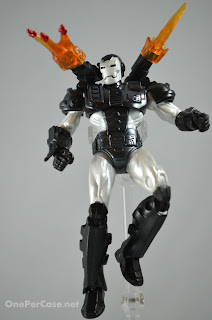 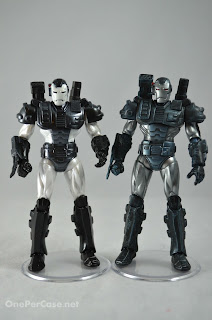 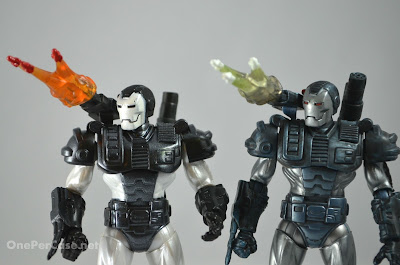 Other than the questionable paint, this is still an awesome figure. The articulation and range of motion are pretty great, other than the awkward shoulder armor on hinges that inhibit some movement, and the sculpt is spectacular. The Iron Man 2 line nailed character likenesses, so this is a fitting re-use. And he’s got accessories, too! The gun and missile pod on the back are awesome, and I love the attachable firing effects. Every War Machine figure needs to come with these.

Then there’s Mockingbird. I don’t know whether I love or hate this figure. I love that we finally got her, though I’d prefer her more modern costume, but I hate the body she’s on. Yep, it’s the original MU female mold. Ugh. She’s basically a repaint of Firestar from the Spidey and Friends set, since she uses the same head and body. Only the lower legs are different.  Her articulation is weak, her sculpt is soft and under-detailed, her paint is sloppy (on both of my sets), and she has a slight case of derp eyes. One more shining example of Hasbro’s outstanding quality control in this line. /sarcasm. I hope we get a modern version of this character on a newer body at some point in the line. 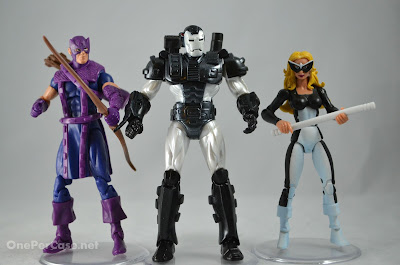 Mockingstar…Firebird… who ever she is, comes with accessories, too. It’s just a white version of the newest Daredevil’s batons, but it works ok for Mockingbird. A longer bo staff would’ve been nice, though. So Hasbro definitely gets credit for including accessories with all three figures in this set. That doesn’t happen very often, if ever. 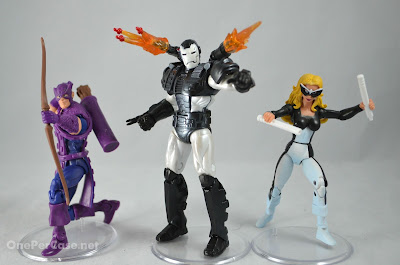 All in all, this is a solid set of figures. Nothing as new and highly-demanded as Rogue in the Uncanny set, but still a nice selection of two popular Avengers that have traditionally been in demand, and a new character that we need to flesh out the team. It’s a little disappointing that this set is packed two per case instead of the Uncanny X-Men set, as I think that one has the higher demand, but I don’t expect this set to sit around for too long on store shelves. As of this writing, it is still available from BBTS. If you’re an Avengers West Coast fan, it’s worth picking up. 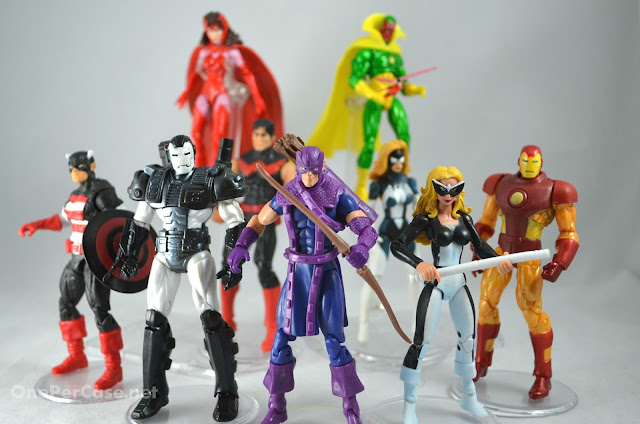