Next up from Marvel Universe wave 20… is it still wave 20? Who knows. I’m still calling it wave 20. Or, you know, that one wave that we’ve been waiting nearly a year and a half for. Anyway. Today, we look at Angel. He was my most anticipated figure of the wave… but then we got a pre-paint of him last summer in the TRU X-Factor pack, so the wow factor has kind of already worn off at this point. Is Warren Worthington III still worth picking up? 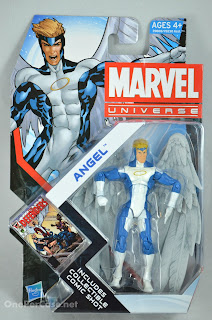 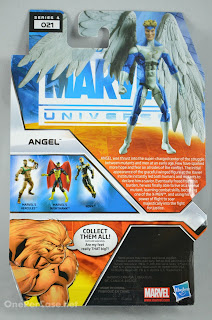 The packaging is standard Marvel Universe fare. I do like the art and the comic shot. I thought the comic shots were pretty lame at first, but they’ve grown on me. And now that we’re four whole years into the Marvel Universe line, I realize that we’re not likely to see this packaging design stick around much longer. I hope we do, but with Hasbro’s compulsion to change packaging design every other year for many other lines (gotta keep it fresh!), I’m actually pretty impressed that we’ve made it this long with a mostly consistent packaging design in MU. I don’t keep my figures carded, but I’ll miss this design whenever it does eventually retire. 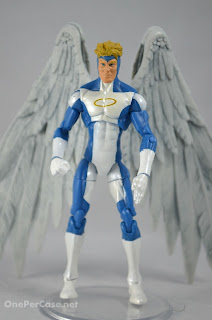 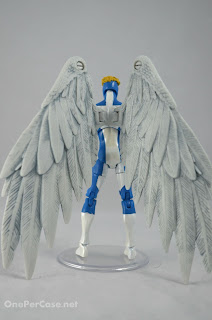 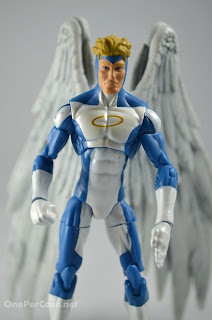 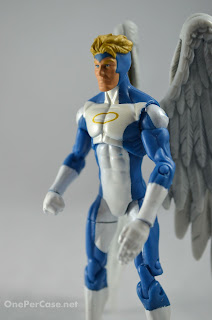 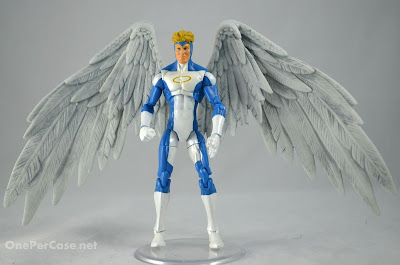 Angel is a straight up repaint of the figure from that X-Factor set. His lower legs, torso and arms are a much re-used sculpt, so much so that I don’t even remember who it was first used with at this point. His upper legs are the newer design that, I believe, were first used with Dr. Strange, but again, they’ve been used so many times at this point, who knows. Maybe it was Scarlet Spidey. The head, wings, and left “flying” hand were all brand new with the X-Factor release of this figure, and haven’t been used with anyone else. Yet. You know it’s only a matter of time. 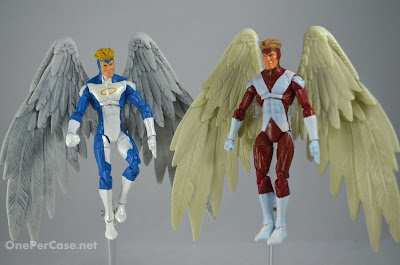 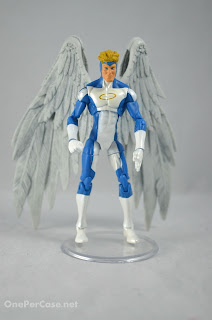 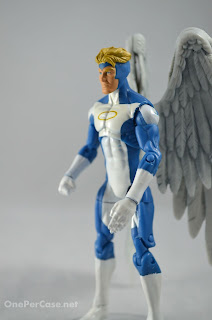 The articulation is good, but not spectacular. He’s got all the same joints you’ve seen a hundred times now in this line, but lacks the newer rocker ankles that make standing poses so much fun. The most disappointing aspect of this figure isn’t the lack of rocker ankles, though. It’s the lack of a neck hinge to allow for him to look “up” while flying. At this point, that POA should be standard on ALL figures, if not the flying characters at the very least. So that’s a serious bummer for Angel. 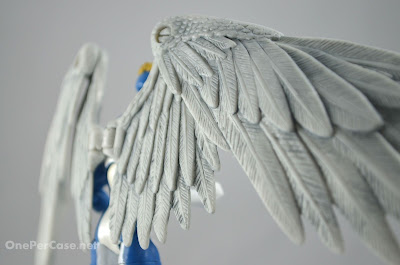 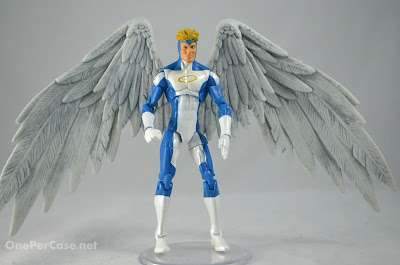 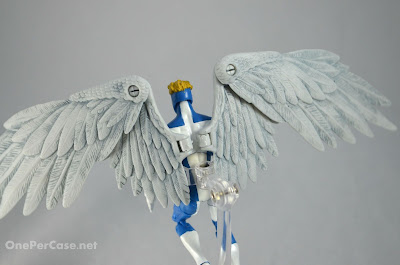 The most impressive part of this figure is, by far, the wings. Each wing moves on three points of articulation, so you can get some pretty good poses out of them. And I love this design, with the swivel at the top allowing the wings to spread naturally, as opposed to Archangel’s vertical hinge down the middle that never quite looked right to me. 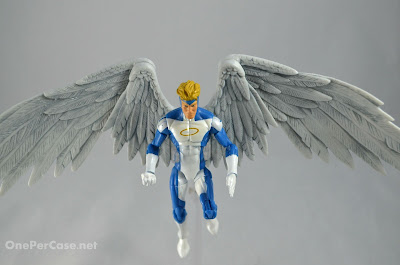 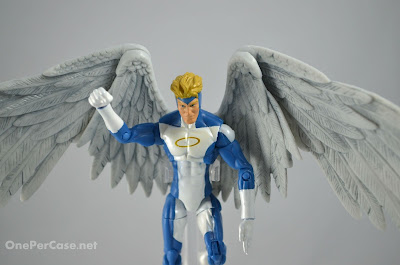 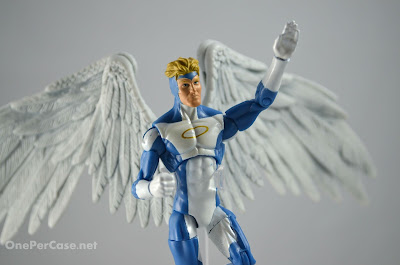 The wings are also the most nicely painted aspect of this figure. Unlike the X-Factor release, these versions have some nice shading that really brings out the detail in the feathers, which really makes you appreciate the intricate sculpt even more. These are a very nicely sculpted piece. Very similar to the DC Unlimited Hawkman wings, but obviously smaller. I can’t think of many winged characters in Hasbro’s various licensed properties, but I hope they find a re-use opportunity for these at some point. It’d be a shame to let the mold die after Angel. 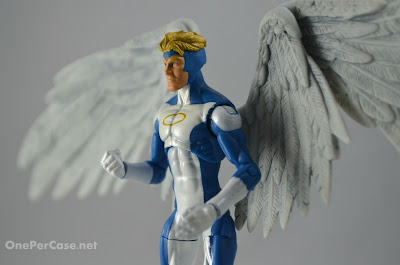 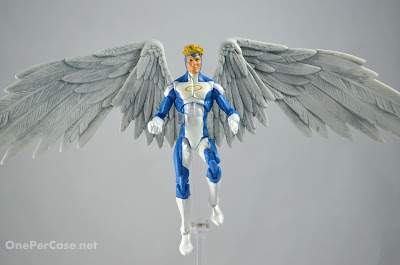 The rest of the paint job on the figure is pretty mediocre. It faithfully captures one of Angel’s most iconic looks, but it’s a little bland. And like almost all of the new figures in this wave (and the team packs), the execution is sloppy. Hasbro’s QC seems to have taken a vacation while this wave was in production. This sample isn’t horrible, but I’ve seen a few pretty bad ones online. Luckily mine just has some blurry lines and overlapping skin tone on his hood. 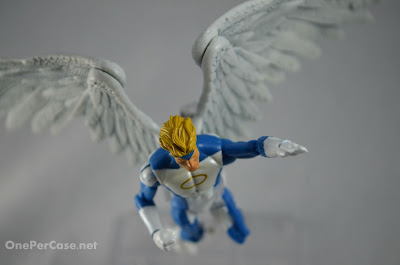 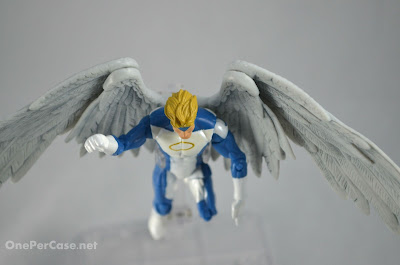 Archangel comes with zero accessories. Which is fine, since he’s not exactly known for carrying weapons, and I kind of view his wings as an accessory. But still, with so much reuse in the figure, it’d be nice to get a little something extra. Even just a stand. 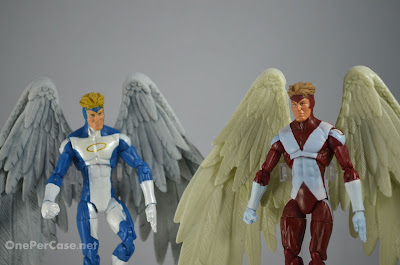 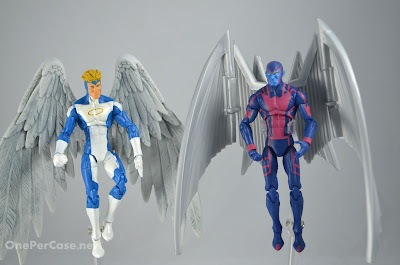 If you’re a fan of the X-Men, Angel is worth picking up, especially if you never got the X-Factor version. Rumor is (or was, at least… a year and a half ago) that Angel will have a variant in the red and white version of this costume (just like the old Marvel Legends figure). I don’t believe any examples have yet been seen, but that may or may not happen at some point, so keep an eye out. This wave is just starting to make it out to retail in some areas, and is available at BBTS. 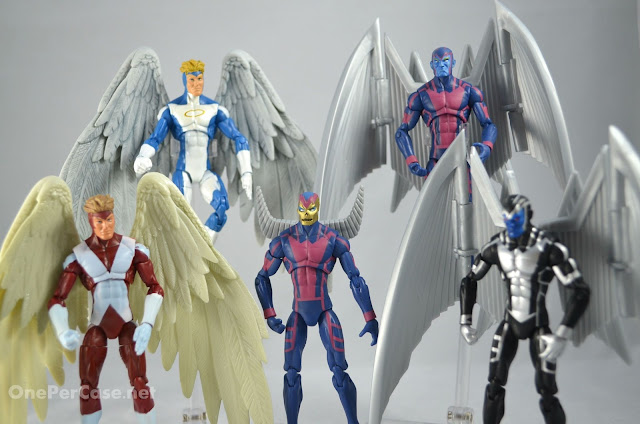