Tony Stark finally steps into Marvel Legends' Heroic Age thanks to this not-so-movie-ish movie tie-in.  As the only actual 100% NEW figure of the first wave, is he really the bleeding edge of the Marvel Legends line?  Or does he miss the mark? 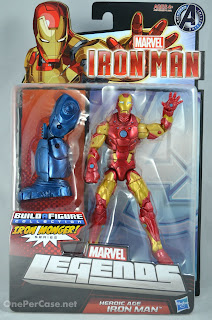 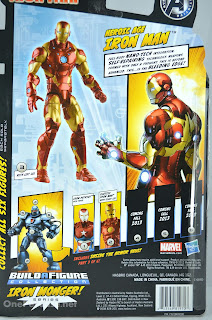 I love the packaging for this Iron Man Legends series.  It doesn't actually say "Iron Man 3" anywhere on the package, but it does have some really cool artwork of the Mark XVII suit from the upcoming movie, and it has an "Avengers Initiative" emblem on the top, so it's pretty clear that this is a movie tie-in line, while still being an obvious sibling of the main Marvel Legends line.  And just like the mine line, the back of the card features more character art, and the shortest bio ever written about the character.  With this wave, we also get the cross-sell featuring the other two figures hitting now, and three mysterious blacked out slots to represent the second wave, coming in "Fall 2013".  Which in toy terms, could be anywhere from tomorrow to next Christmas.  Supposedly, that second wave will be the Mark XLII, movie Iron Patriot, and a classic Ultron.  Guess we'll see soon enough.

Like I mentioned, this is a 100% brand new sculpt.  There are no re-used parts here.  And it looks fantastic.  For once, Hasbro actually got the scale and proportions correct for Iron Man in the Legends line.  This figure actually looks like a person wearing a suit of armor, unlike the anorexic Extremis, and the dwarfish Neo-Classic.  The head is appropriately sized as well.  Few things get on my nerves in this hobby more than pin-headed figures of guys in armor, so I very much appreciate this attention to detail.

The rest of the sculpt is pretty phenomenal, as well.  All of the detail of the armor from the comics is faithfully captured, down to all of the little RT lenses and the boosters in the soles of the boot.  Whoever sculpted this figure needs to do all the Iron Man figures from now on, please.  Kthx.

The articulation is also above par for this line.  We've got the usual ball-socket head, but with the coveted neck hinge to allow him to look up for flying poses.  Ab crunch and waist swivel, ball-hinged shoulders with bicep swivels, double-hinged elbows, swivel-hinged wrists, ball and swivel hips, double-hinged knees, and ball-hinged ankles with the rocker swivel, to allow for some dynamic stances.  There is nothing more I could ask for in the articulation department.  My only minor complaint, is that the wrist articulation is slightly hindered by the sculpt of the forearm armor.  Despite all this poseability, this still feels like a solid figure.

The paint is pretty straight forward.  Mostly red and gold, with some blue for the RTs and the eyes.  The eyes also have white in the middle to give the glowing effect, but this is a detail that's actually missing from all the RTs.  Those blue dots should all have white in the middle to give the appearance of light, as well.  This detail was included on the 3&3/4" Marvel Universe version of this armor a couple years ago, so it's disheartening to see it missing here.  And the sculpted boosters on the bottom of the boots are missing any paint whatsoever.  This is more excusable, since it's the bottom of the feet, but it would've been a nice touch if it were included.  Finally, the red itself is a little bland and leaves something to be desired.  I would have liked a slightly darker, deeper red.  But that's a minor nitpick on my part.  Overall, the Universe figure had the nicer deco, so this is definitely the weak point of this new release, but is by no means bad.

The figure includes no accessories, other than the left leg for the Iron Monger Build-a-Fig, but honestly, that doesn't bother me.  There aren't many accessories that make sense for Iron Man, and with the entire figure itself being completely new, I can't complain. 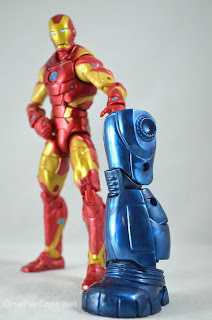 The Build-a-Figure piece looks great, by the way.  The size and paint finish, along with the other leg and torso from this wave, have me completely salivating for the completed figure.  I think Iron Monger will warrant his own review once he's complete.  By all indications so far, he may be the most awesome BAF in a long, long time. 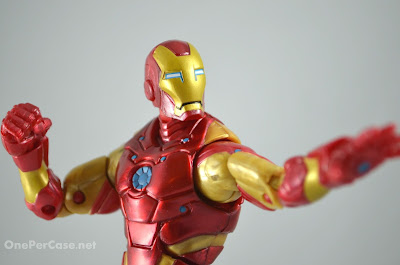 So despite the slightly bland paint job, and the minor lack of accessories, this figure is an absolute win.  I would even say that this is, hands down, the best Marvel Legends Iron Man figure ever.  EVER.  Except for the Movie Mark IV, if you count movie armors.  That one was also badass. 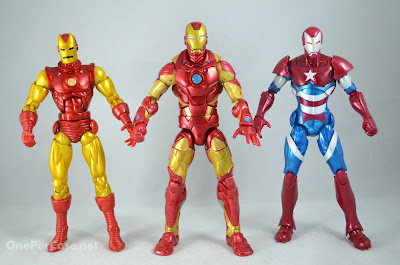 This wave is just starting to trickle out at retail, and should be hitting in much bigger numbers after this weekend.  This figure is packed three to a case, but if you don't want to risk missing out, BBTS also has him up for pre-order. 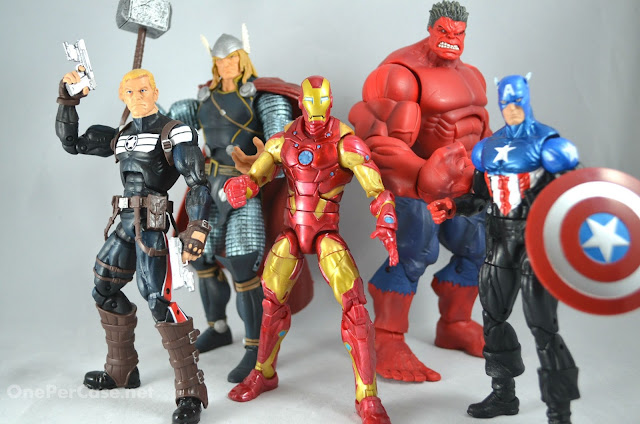