Rounding out the first wave of Iron Man 3 Marvel Legends is this classic version of old shell-head. Like the Iron Patriot, this guy is a repaint of a previously released figure with one new part. Is he worth tracking down? How is that even a question? You want Iron Monger, don’t you? 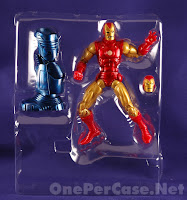 The packaging for Classic Iron Man, like Heroic Age and Iron Patriot, is a slight departure from the normal RoML packaging, adding an Avengers Initiative emblem, a sweet drawing of the movie Mark XLII suit, and the Iron Man movie logo that is conspicuously missing the “3”. Unlike previous movie-verse 6” figures, this line does actually bear the Marvel Legends name on the package. Over all, I think the packaging looks pretty sweet.

This may be the least exciting figure in the wave, since he’s basically a re-do of a suit of armor that we’ve already received multiple figures for, but don’t let that deter you from giving this guy a closer look. The Wave 1 ToyBiz Iron Man is long outdated by now. This guy is a repaint of Hasbro’s take on Classic Iron Man, which was first released in a Toys R Us 2-Pack a few years ago, in both the yellow/red and stealth blue varieties, but this figure improves on that release by including a new alternate head of the horned helmet, and a much, much better looking paint job.

The sculpt is very nicely done, with good proportions and sharp detail. It looks pretty much dead-on to many comic interpretations of this suit. Realistically speaking, the proportions aren’t as anatomically correct as the Heroic Age suit, but they are mostly faithful to the comic art. This version of the suit was basically drawn as a skin tight spandex suit, anyway, so it doesn’t really bother me too much that this doesn’t look like a guy in an actual suit of armor. 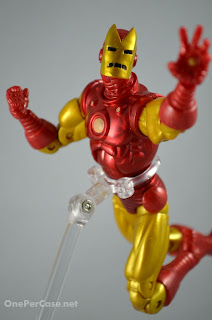 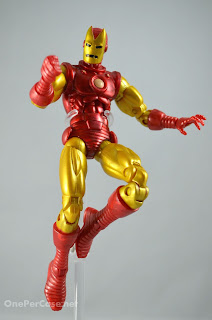 The articulation is all here, or at least what you would’ve expected for a figure released a few years ago.  Ball jointed head/neck with "look I'm flying" hinge, ab crunch, swivel waist, ball-hinged shoulders with bicep swivels, double hinged elbows, ball-hinged wrists, ball-hinged hips with thigh swivel, double jointed knees, and ball-hinged ankles.  Pretty good range of motion on those joints, too. 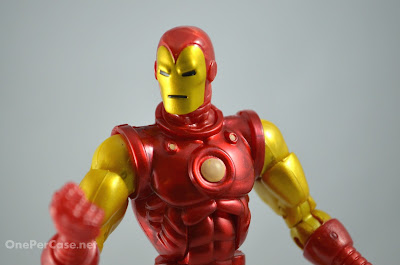 Like I mentioned, the paint is much nicer on this release. Instead of flat reds and yellows, we get metallic red and gold. It’s simple, without need for much detail, but it’s executed well and cleanly applied. No mistakes. I’d say this figure has the nicest paint out of the wave. Sometimes less can be more, and I’d say this is one of those times. I wish the Heroic Age figure had these same red and gold tones.

This figure gets a thumbs up in the accessories department, too, because it’s the only figure in the wave that includes something other than the BAF piece. While I would’ve liked to see Hasbro include the alternate Tony Stark head from the original release as well, it’s still great that we got the new horned head. And the heads are easy to swap back and forth. Plus, if you do have the previous release, that Stark head will fit just fine on this figure. No other accessories are included, but honestly, I don’t think any more were needed. The Build-a-Fig piece more than makes up for any other possible accessory, and I'll happily take this over the Stark head. One step closer to completing the B-A-M-F (Bad Ass Monger Figure).

This figure is packed at only two per case compared to three each of the others, but that may be wise on Hasbro’s part, since this armor hasn’t been relevant in the comics for quite some time, and some collectors may opt to skip it because they already have the original release. Those people are crazy, though. This figure is worth picking up for Iron Monger’s leg alone, and the beautiful paint job and swapable heads make it even more worth it. Hell, I want to pick up a second one just so I can have both heads displayed in my hall of armor.

These figures are just starting to hit retail now. They should show up in decent numbers after the street date of 2/11. If you don’t want to hunt, you can also order the set or case from BBTS. 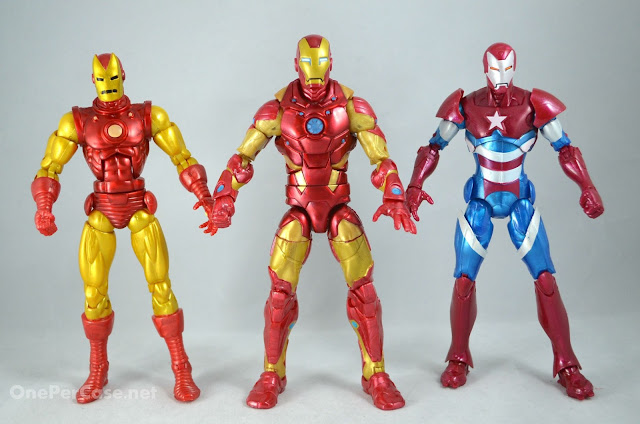