Masked crusaders, working overtime, fighting crime. Yea, been a long time since I heard that one. M.A.S.K. was a great toy line from the 80s. It never achieved the popularity of G.I. Joe or the Transformers, but it featured four series of transforming vehicles and masked madmen. The third series featured the Iguana with Lester Sludge. Great toy at the time, but how does it stack up by today’s standards? Read on! 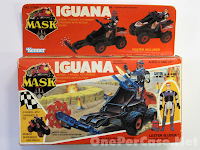 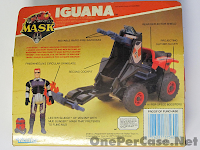 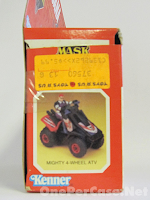 Just look at that box. It’s classic 80s. A mix of artwork, photos and plenty of product features to read about. Check out that price tag, $5.99! A vehicle and a driver for under six bucks, not bad, right? Adjusted for inflation, that would run about $11.99 today. Granted, that’s still not bad considering we’re paying about that for a single 3 ¾” figure. 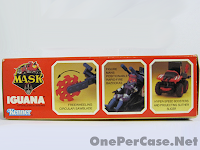 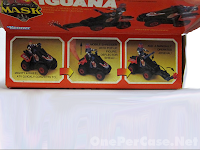 Great artwork on the front of the box. A tab, top, bottom and both sides all showing what the vehicle can do. Sure, calling the back seat a “rear deflector shield” might be pushing the definition of “features”, but this was a smaller vehicle for the line, so I’ll give Kenner a little leeway on that. 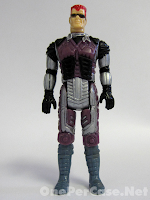 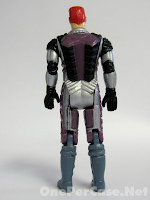 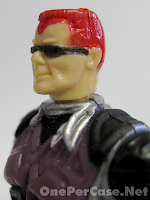 Iguana came packed with Lester Sludge with the Mud Slinger mask. With toys, they tend to make it pretty easy to tell which side the character is on, so yes, Lester Sludge is a part of the Vicious Evil Network of Mayhem (V.E.N.O.M.) which yes, is the bad guys. The Mud Slinger mask… slings mud. I’m guessing they meant it in the literal sense, since a mask that ran a dirty political campaign would be pretty lame. 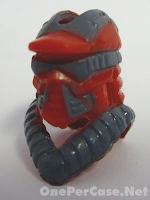 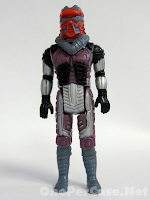 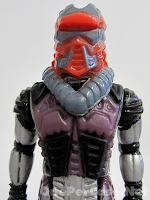 The M.A.S.K. figures run a little under 3” tall and feature seven points of articulation (neck, shoulders, hips and knees). The articulation was pretty good for the time, especially considering the smaller scale. Knees help the figures to actually be able to drive their vehicles. You’d think that would be a given, but there are plenty of figure (particularly in the Star Wars lines) that weren’t able to fit in their own vehicles. The sculpt is good, and the paint matches up fairly well with the colors on the Iguana. 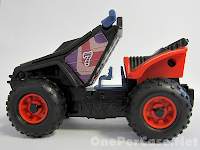 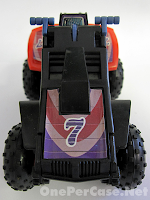 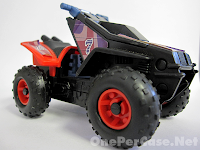 The Iguana starts out as a mighty 4-wheel all-terrain vehicle. Yes, Lester “Sludge” with the “Mud Slinger” likes to ride an ATV. Again, Kenner kept it simply for the kids. Given that I don't know a whole lot about ATVs, I'm going to say that this looks like a fairly realistic ATV. 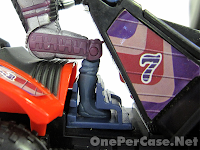 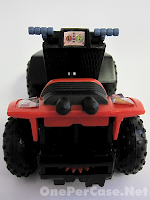 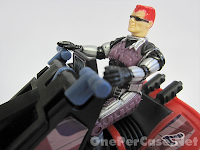 The only real oddity is that, compared to real life, it’s a pretty large ATV for the size of the figure. That being said, the figure fits well on the vehicle, and stays in his seat using a little clip that his feet can slide into. It’s a little unusual, but it works well. Besides, if you're a kid and you've got an ATV toy, there's a good chance your're going to take it off-roading, so it's good to have something that will hold Lester on firmly. 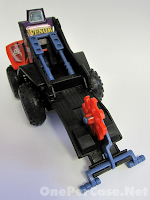 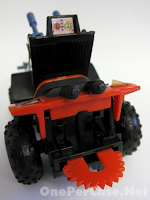 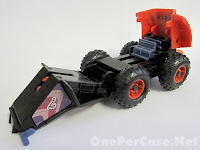 When it’s time to fight those pesky M.A.S.K. meddlers, Lester can convert the Iguana into a mobile shredder. It sounds like a high-tech lawnmower (and kind of looks like one) but I suppose it could do some damage. Battle features include a sawblade in the front, a slither slicer in the back and twin cannons up top. Lester Sludge moves to a secondary battle cockpit in the front. Well, they call it a cockpit. 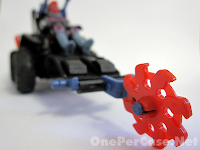 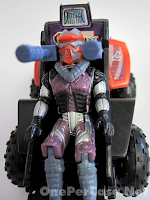 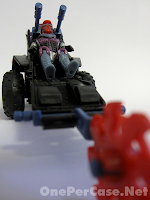 M.A.S.K. was a fun line that still has a solid fan base and was a pretty good value as far as toys go. You get a little guy with a pretty cool looking mask, and you get a vehicle that converts into some sort of assault platform. The line was popular enough that Hasbro gave fans a “SpecialistTrakker” figure in the 25th Anniversary G.I. Joe line, and how many other 80s lines can say that? 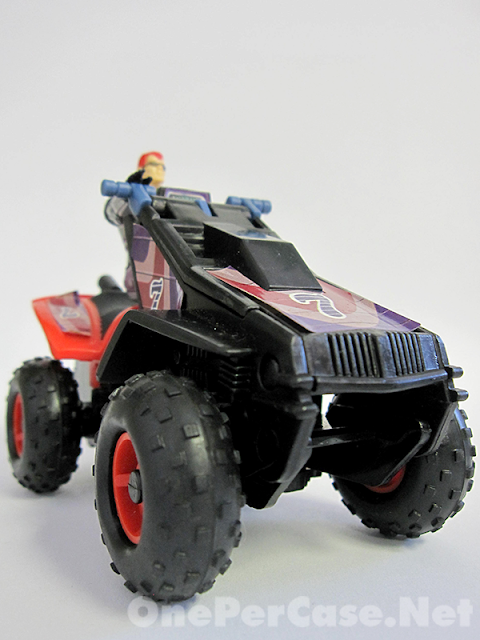