The final figure in the first was of the new Batman Unlimited line is clearly targeted to pull at the nostalgic heartstrings of older collectors that remember the 80’s.  Does it succeed? 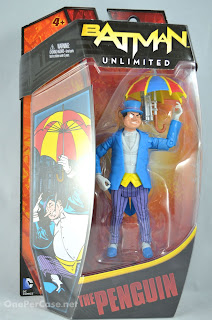 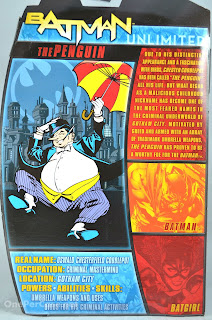 The packaging, like the rest of the Unlimited lines, looks great. Nice artwork, very modern design. What’s not to love. In the case of this figure, though, it looks a little at odds, just because it’s such a huge departure from the packaging of the Super Powers figures back in the day. It would have been cool if Mattel did a little something to commemorate that packaging, maybe use the same colors on this new package while maintaining the modern design. Oh well. Tear the package open, remove figure, play, repeat.

The figure itself is based on the DCUC Penguin release from several years ago, but with a new, more cartoony head, and a heavily retooled torso. I think this combination of parts works pretty well. Strangely enough, the nose is a separate piece glued onto the rest of the head. This was a little distracting at first, but after a while, I got used to it, and it doesn’t really stand out.

The articulation from the DCUC release is all there.  Ball jointed head, swivel waist, swivel hips, ball-hinged shoulders, swivel biceps and wrists, hinged elbows, knees and ankles.  Not quite super articulated, but not bad.  And for a pudgy slug like Cobblepot, he doesn't really need anything more.  Face it, the dude's not exactly Dick Grayson.

The paint is awesome, if you’re into the bright colorful Super Powers thing. I usually prefer a darker, grittier look for my Bat-characters, but as an homage to a classic figure, I like it. He’ll go in my very small “classic” Batman display with Golden Age Batman and Joker, and vintage head Robin.  The paint is pretty sharp, no issues on my sample.

And what good would a Penguin figure be without one of his deadly umbrellas? This accessory is also a repaint of the DCUC version, again in much brighter colors. It fits. I just wish the figures hands were sculpted to better hold it. The gun snaps off the umbrella pretty easily as well. You might want to use a small clear rubber band to keep it held on firmly.  Mattel's DC figures don't usually come with a ton of accessories, but it would have been cool to also get a closed umbrella, or an actual penguin or something. 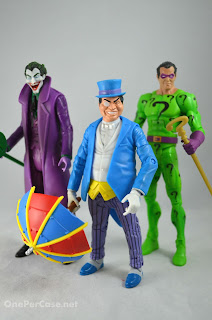 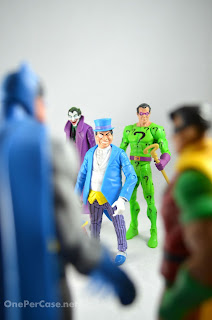 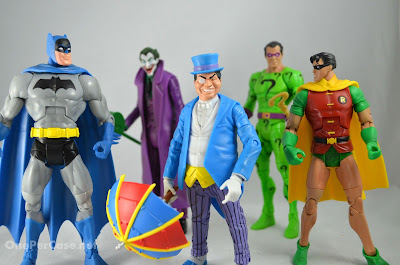 All in all, this isn't a bad figure.  He's actually pretty cool, if you're his target demographic.  This is definitely a niche figure that won't appeal to everyone.  Because of that, I seriously question Mattel's decision to include him at two per case while the more relevant (and completely new) Batgirl is short-packed.  But questionable production ratios aside, this figure is worth picking up if he appeals to your sense of nostalgia, or if you're just in the market for a goofy colored, slightly cartoonish Bat-villain.  Penguin is hitting retail now, and is available at BBTS individually (sold out at the time of this writing), or as a part of the Wave 1 set. 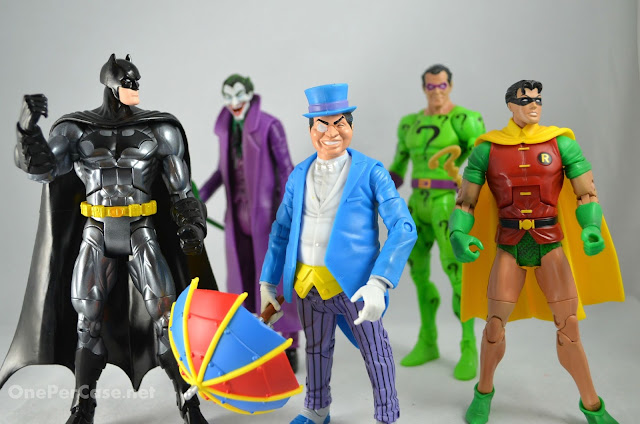