Batman Unlimited is starting to show up at retail, and what would a Batman line be without having the line’s namesake taking up half the case pack? While the awesome, brand new Batgirl is packed at only one per case, this Batman repaint is three per case.

Since this Batman is just a repaint of the figure released a few short months ago in the DCUC All-Stars wave, I won’t go on and on about him here. Suffice to say, this is the exact same figure, with a shinier paint job. 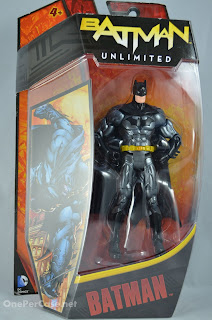 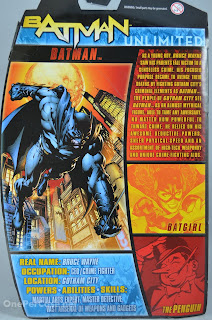 The packaging for this line is awesome. I love the artwork, love the design. One thousand percent cooler than the DCUC packaging.

The figure is a straight repaint of the All-Stars release that marked the end of the DCUC line. Over all, it’s not a bad figure, but I do have my complaints. The sculpt is pretty nice. I definitely appreciate the sculpted costume detail rather than the painted-on costumes from DCUC. The panel lines and raised bat symbol on the chest are nice, and the gauntlets and boots are pretty great too. 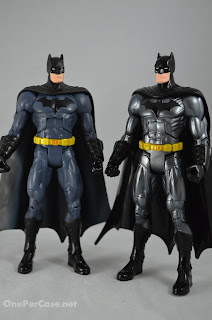 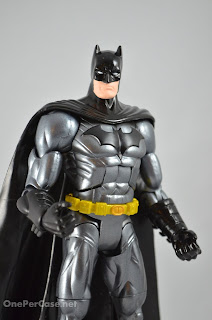 But what’s with the pin head? Ugh. This is starting to become more of a trend with Mattel’s DC figures, isn’t it? The head is under-sized, and slightly squished looking. Like Batman got punched in the face a few too many times.  Maybe by a shark.  I actually dislike this head so much, that on my All-Stars release, I replaced the head and neck with that from the DC Collectibles New 52 Batman figure. Much better proportioned, and way more detail in the sculpt. I might have to do the same thing with this release. The more I look at it, the more it bugs me. 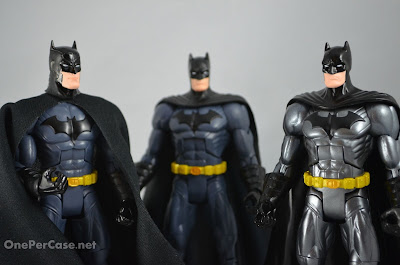 I’m not a huge fan of the cape either. It looks alright, but I like my Batman to have a floor length cape. And I’ve never been a fan of sculpted plastic capes, I prefer soft goods. I gave my All-Stars Bats a cloth cape, so again, that might have to be a future mod for this guy as well. 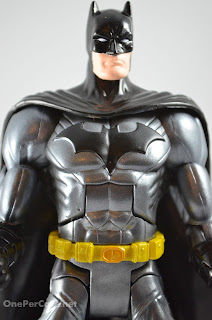 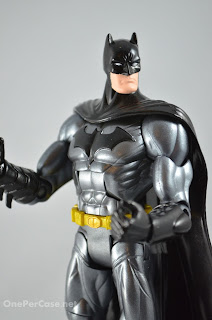 The paint actually looks really good, which kind of surprised me. At first I thought it would look weird having Batman in metallic grey and glossy black, since his bat-suit isn’t normally metal armor, but it strangely fits. I still prefer the matte colors of the All-Stars release, so that will remain my default, but this metallic version still looks good in its own way. The paint is well applied, too. No issues on mine. And I do like the slightly more metallic gold for the utility belt, compared to the overly bright yellow on the All-Stars release. 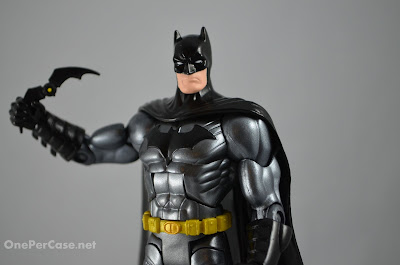 No accessories. That’s a real shame, especially since this figure is 100% repaint. Every Batman figure should come with, at bare minimum, at least one Batarang. So a thumbs down there, but not really surprising for Mattel.  So for the sake of photos, I gave him a Batarang.

So is this figure worth picking up? Yes, definitely, if you missed out on the All-Stars release. If you do have that first version, this one will probably be an easy pass for you, unless you’re a completist and/or have an appreciation for metallic Batmans. He does look awesome.  Despite the derp head, this is one of the better Batman figures to come out of Mattel. 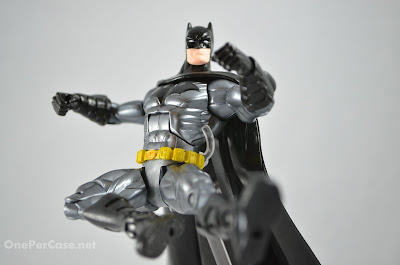 Luckily, this figure shouldn't be hard to find for long, being three per case.  This wave is hitting retail now, and is also available at BBTS.
Posted by Zak Sousa at 8:00 AM