Stepping into a little bit of Joe territory here... The very first review I did here on One Per Case, back in December of 2011, was for the Takara Striker Optimus Prime.  Now, we've got a premium, Buster-ish repaint of the updated-for-DotM Leader Class Prime.  How does he compare?  Is he just another in a long line of Optimuses (Optimii?), or is he more than meets the eye?  Check out this striking figure after the jump.

Ok, I'm sorry for those really lame puns before the break.  I couldn't help myself.  Please forgive me.  Here, let me make it up to you with lots of pretty pictures.

This release is the first in Takara's "APS" (Asia Premium Series) line.  Meaning it's sold in the Asian (non-Japanese) market.  While I love having high-end imported Transformers in my collection, it is just a little sad that we don't see these sort of "premium" releases here in the states. 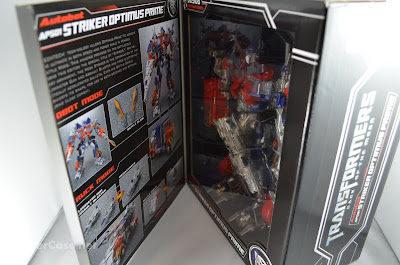 The packaing is reminiscent of Takara's Masterpiece Figures, being mostly matte black with photos of the figure, and comprised of a sturdy feeling cardstock.  There's a nice magnetic clasp that opens to reveal the figure and his accessorries through a window.  I don't keep my figures "mint in box", but for those that do, this really is a nice package, allowing you to see the figure without opening it. 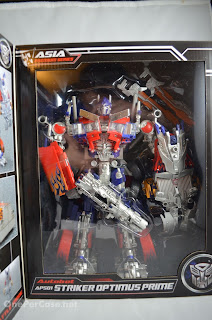 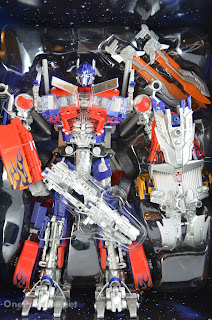 After you slice the tape and remove the figure, you'll find him twist-tied into a plastic tray, like you'd expect.

The figure is packaged in 'bot mode, so you'll notice right away how great he looks.  He is essentially the Striker Optimus figure with the Buster Prime paint job.  Most of the bot parts are painted in metallic silver, with a chromed truck grill and window flap guard things.  The truck mode parts are molded in dark blue and red plastic, with the painted on flame details having the light blue pinstriping that was present on the two-pack version of Buster Prime.  There is almost no plain, ugly, light grey plastic like you would see on the cheap US releases of the Leader Prime.  However, unlike the Buster releases, this prime does not have metallic hands.  The hands are plain grey plastic.  Also, the little round pieces on the abdominal section are also unpainted grey plastic.  So that's a little bit of a bummer, but not enough to be a deal breaker.  Only a minor complaint.  The paint is all well applied with no mistakes, overspray or smudging.

Mold-wise, this guy is identical to the original Striker, using most of the original RotF Leader Prime, with remolded forearm, chest and ab pieces to reflect the updated robot design in Dark of the Moon.  There is no new tooling in this release.  The electronic lights and sounds are the same as the original Striker as well, with green LEDs in the eyes, red in the chest, the transforming "gik oot oot oot oot" sound when you separate the waist, and the "We must stop the Decepticons!" phrase when you push down on the fold-out tab on the abs.  These functions all work well and add some good play value to the figure, but after this many releases, I'm still really disappointed that we haven't gotten the screen-accurate blue LEDs for the eyes.  I know that blue LEDs are more expensive than red or green, but for a premium release like this, I think it would be nice to have.

As for weapons, APS-01 includes ALL of the weapons for the original Striker Prime, including the previously limited edition swords.  This time the weapons are also all painted with metallic silver, including the handles of the swords, so they are slightly different from the Toys R Us Japan exclusive versions.  The gun is still comprised of two smaller mech-tech blasters.  And the shield still functions as before.  Of note, the shield does NOT include the pinstriping around the flames like the rest of the truck mode.  That's a minor oversight and not a big deal as far as I'm concerned. 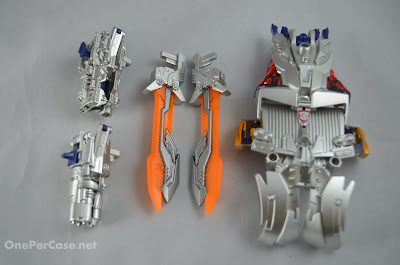 Unfortunately, just as with the original Striker, this Prime does not include the removable gas tank Buster gun.  That means he also won't be able to use the Jetwing pack, either.  But luckily, there's a third-party upgrade kit coming in the near future that will allow you to add removable gas tank guns to any Leader Class Prime of this mold.  I've got a couple sets on pre-order, so we'll look at those when they arrive.
﻿

I'm not going to go into a bunch of detail on the transformation for this figure.  Lets face it.  This is like the 10th release of this mold.  You already know how he transforms.  Here's a photo of him in mid-transformation, so you can see that it's all still the same. 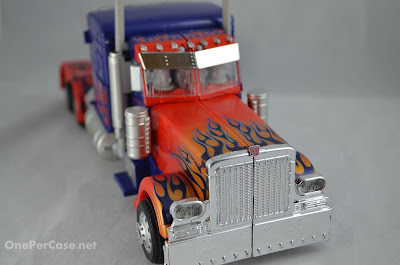 Vehicle mode looks just as good as bot mode.  Maybe a little better, even, since less of the plain grey plastic is visible.  In fact, in this mode, he's very difficult to distinguish from the two-pack Buster version.  He looks virtually identical, except for the non-transforming gas tanks, and the inclusion of the two mech-tech ports on the top of the cab.

All of the weapons can attach and fit on the truck mode in a few different possible configurations.  The shield can either plug into the trailer port on the back, or snap over the hood for the mean-looking "stealth" mode.  The guns and swords can also attach in a couple different places for use in vehicle mode. 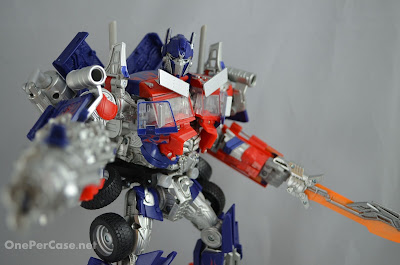 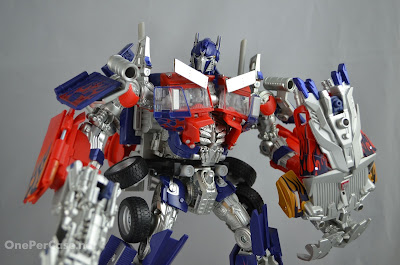 This figure, like the previous versions before it, is still one of the most impressive feats of Transformers engineering I've seen.  I don't think Takara, or Hasbro, will top it for a long, long time.  It looks remarkably screen-accurate in both bot and alt modes, much more so than many other movie-verse Transformers figures.  I'm a big fan of this mold in general, and especially the premium releases.  That said, I can't decide whether I like this one more than the original Striker.  They're both outstanding releases, but at the end of the day, the original Striker looks more... err... original.  This "premium" deco has been done before, so it feels less new.  But that's not to say that it's not completely awesome.  I enjoy having both versions in my collection.  If you already have the first Striker, this one may be easier to pass on if you don't feel like spending the money.  But if you don't have the first Striker, this one is a must-have for collectors of movie-verse and/or premium series Transformers.  This figure is still available through BBTS, though stock is quickly running out.  If you're considering picking this guy up, jump on him while you have the chance. 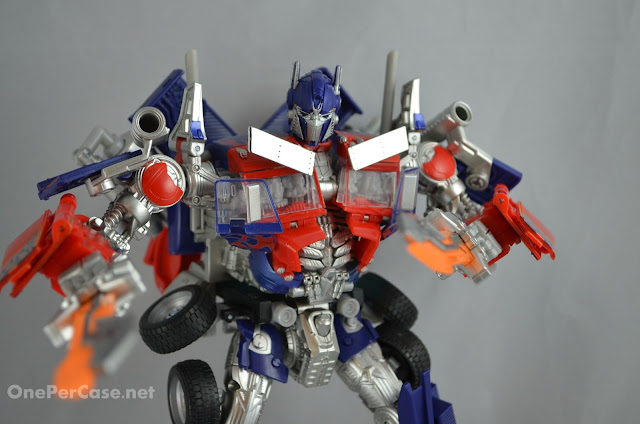