Alas, poor Vintage Collection, I knew you well. Seriously, this is the line that returned me to being a Star Wars completist, at least for figures. In general, this line treated collectors to primo packaging, superb sculpts, awesome articulation and amazing alliteration. As part of the final (sadly, online only) wave, we receive an update to Weequay, ready to guard Jabba in all his 1983ish splendor. So is this someone you want haunting the hallways of your 3 ¾” scale Jabba’s Palace? Read up!

In case you are incredibly late to the game, Hasbro delighted Star Wars fans with a line known as the Vintage Collection. In addition to the retro style packaging, the figures in this line have been, by and large, top notch. Given the direction Hasbro seems to be directed, you should definitely enjoy these figures while you can. The packaging for Weequay looks more or less like the original 1983 Kenner release, much to my delight. Thankfully, unlike the Weequay I bought at PayLess in 1983, this version came with two attached arms. 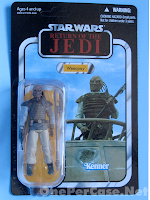 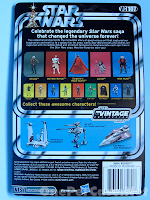 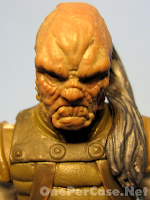 Check this guy out! The paint job will leave you with a smile on your face. The colors are reminiscent of the vintage Kenner version, but more muted and realistic. The face sculpt looks great, and a bit of a paint wash makes me think I left this guy out in the sandbox too long. The beady black eyes are great, and really this guy makes me think he just walked in after 12 hours of skiff duty. Well done. My only complaint is the unpainted joints peeking through on the shoulders and backs of the knees. 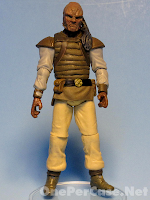 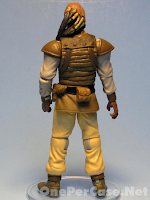 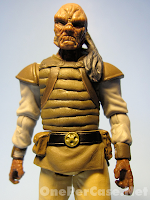 Once again, Hasbro delivered a fantastic sculpt for the Vintage Collection. Weequay’s head and hands look rugged. His “shirt” has some good detailing in the padding. The belt and pouch aren’t the best I’ve ever seen, but they are good. The pants and boots, while somewhat plain, feature enough detail to make the quality fit in with the upper half of the figure. Bottom line, this Weequay looks pretty amazing. 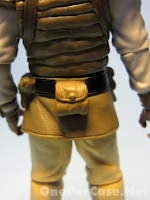 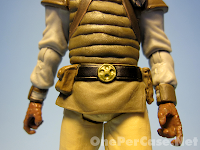 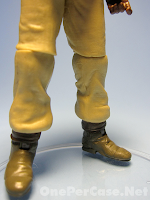 Any self-respecting Weequay needs to be armed well enough to defend his Huttese master. With a hold-out blaster and a vibro-axe, Weequay is armed well enough to do his duty. The pistol looks passable, and fits snuggly in either hand. Only other thing I could have asked for was a working holster. The vibro-axe is reasonably well detailed, and again, fits well in both hands. For me, the hallmark of a good accessory is “can the figure hold it so it won’t fall out of his/her hand(s) and will look fairly natural being held”. Weequay passes on both accounts. 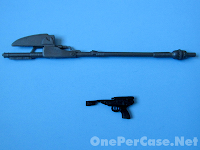 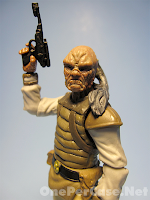 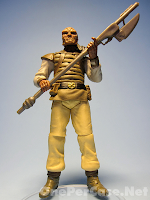 The Vintage Collection has been filled with (other than a few exceptions) a great amount of articulation. Weequay features all the joints you need to pose him in a Weequay-ish manner. I can’t really think of more articulation that would really add to the value of this figure, so suffice it to say you should be happy with the way this guy moves. 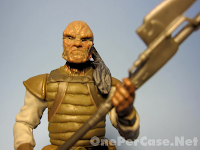 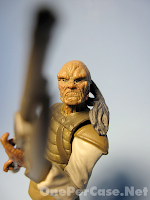 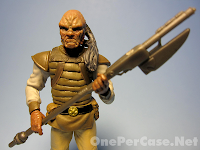 I truly hope the quality of the Vintage Collection gets passed on to the next Star Wars line (whatever that may be), or at very least revisited somewhere down the line. Hasbro, we’ve seen what you can do, and now we’re spoiled. If you start moving in the wrong direction, we willnotice. In the meantime, if you haven’t yet, grab yourself a Weequay or two. He can still be found at a good price, and you won’t be sorry. 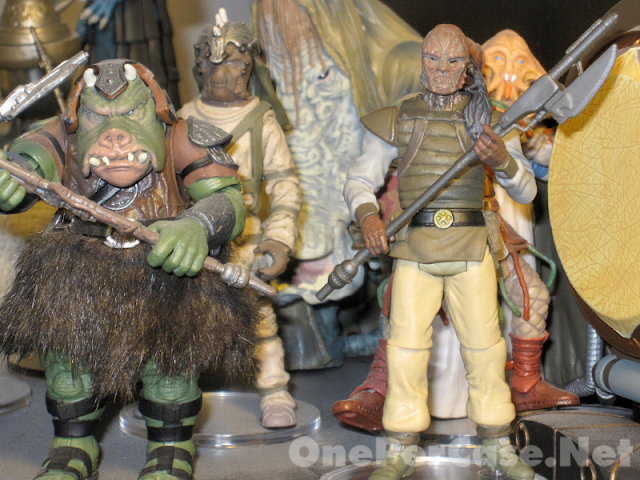