Now that the obligatory Batman from this first series of Play Arts Arkham City figures is out of the way, let's look at the real star of this set, Catwoman.  This might just be the best figure of this character ever.  Click the "read more" link right meow.

Like the Batman, Catwoman comes in an even-nicer-than-normal box, with lots of great monochromatic art from the game highlighted by splashes of red, photos of the figure, and a cross-sell for Batman.  The front flap is again secured with velcro and opens to reveal the figure through a window, more artwork, and the not-quite-fluent English character bio and story synopsis.  Again, this piece will look great for mint-in-box collectors, but even better for those of us that open our toys.

The figure is a new sculpt that faithfully captures the character's in-game likeness in amazing detail.  The cat-suit is wonderfully textured with seams, buckles, zippers, fish-net patterned panels, and contrasting smooth opposing panels.  The face sculpt is beautiful.  Selina looks like she just stepped out of the game and onto your shelf.

The paint job is much simpler than Batmans, but is again, completely faithful to the in-game character, so nothing's missing.  Square Enix kept the deco from being bland by alternating between glossy and matte blacks for different parts of the costume, and highlighting all of the seams in a lighter grey.  The buckles and zipper are painted silver and the goggle lenses are a deep red.  Despite being a relatively simple color scheme, the detail in the paint is very rich. 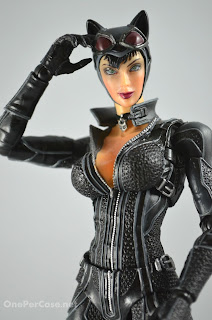 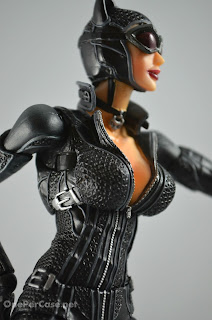 The paint on the face and and chest look great as well, accurately mimicking Selina's skin tone.  It actually looks like human skin.  Her eyes and mouth are a striking contrast to the black costume.  Over all, the paint is exceptional.  Not a single mistake to be found on my sample.  And unlike the Batman, all of the colors here are accurate to the game. 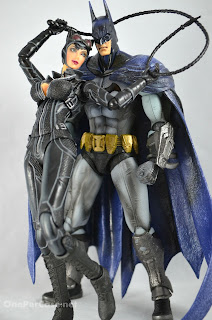 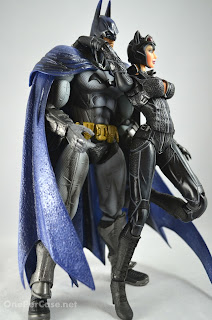 Articulation is similarly impressive.  Catwoman features a ball jointed head, torso and waist, double hinged knees, ball-hinge shoulders with swivel biceps and forward-hinged shoulder movement, and the signature ball-hinge ratchet joints that mark the Play Arts line utilized in the elbows, wrists, hips, and ankles.  And with no cape or costume elements to restrict movement, the range of motion is amazing.  This figure is capable of being put into poses that I wish all female action figures could achieve, because they actually look feminine.  I don't think I can say that for any other female figure in my entire collection.  In fact, the only complaint I can come up with in this category is that the poseability is so great, that it's sometimes difficult to find a good balance point for the figure to stand.  This figure could really benefit from a figure stand.  It's a shame that one wasn't included.  Especially since they used to be standard with Play Arts figures.

Like Batman, Catwoman also includes a generous selection of accessories, including 3 pairs of hands- claws extended, relaxed, and gripping -and alternate goggles-up and goggles-down heads.  The only weapon Selina includes is her whip, which is done in a nice flexible plastic, but is still firm enough to maintain some form, which looks great in poses.  Unfortunately, she doesn't include any other weapons from the game.  I would have liked a bola, or maybe her caltrops.  And like I mentioned, she definitely needs a stand.  But over all, this is a good amount of accessories and extra parts, so I can't really complain. 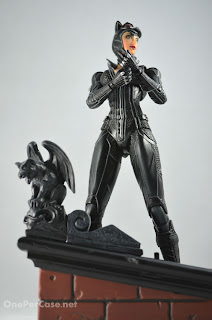 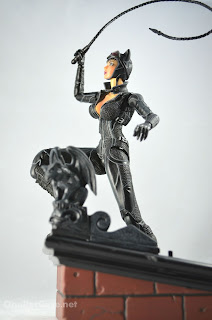 Batman has been done before in the Play Arts Arkham line, so while he was a good figure, he wasn't nearly as exciting as this Catwoman.  This was THE Batman-verse figure I most looked forward to after its announcement in the middle of 2012.  And this figure turned out to be everything I expected it to be.  I have nothing bad to say about this figure, it really is a beautiful piece of art, and raises the bar pretty high for all other female action figures in this price range.  Catwoman is showing up through some online retailers now, and is available for pre-order at BBTS. 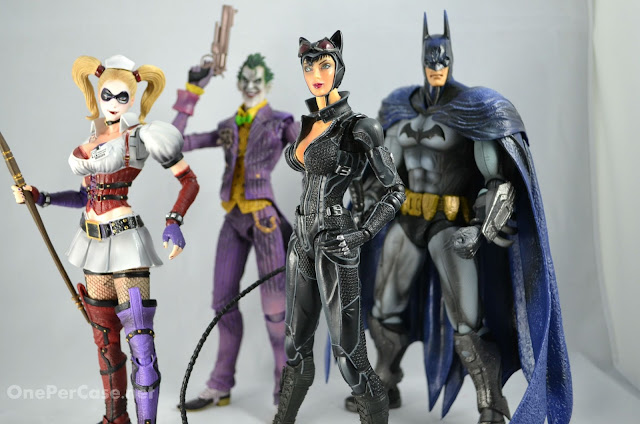 Words, pictures, and skin tight black leather by Zak
Posted by Zak Sousa at 8:00 AM