The packaging for the Play Arts line is always pretty nice, but this new Arkham City line raises the bar compared to past releases from this company.  Batman comes in a glossy card stock box, covered with with art from the game as well as stark photography of the enclosed figure, and a cross-sell for Catwoman on the back.  A flap opens from the front (secured with velcro), that reveals the figure and his accessories through a window, as well as more art and a few paragraphs of questionably-translated character bio and story synopsis.  The high contract and sparse colors look great and match the motif of the game art.  This is one of the rare times where I am almost tempted to leave the figure mint in its package.  But Play Arts figures are much, much too awesome for that.  And no mere cardboard and plastic prison cell can keep the Batman contained.

At first glance, one might assume that this figure shares many of its parts with the Play Arts Arkham Asylum Batman that was released early last year.  That's actually not the case.  Almost every single part of this figure is a new, unique sculpt.  In fact, the ONLY parts that are shared with the previous version (aside from the ratchet ball-hinge joints, which are used by most PAK figures) are the hands.  The hands are recycled, the rest of the figure is all new.  And this figure is actually a little bit taller than his Arkham Asylum counterpart.

The sculpt is very nicely detailed.  Batman's suit has a great patterned texture, not just smooth "spandex".  It looks just like it did in the game.  There are seams and sculpted folds, and a different texture on the briefs, making them look like a different material from the grey bodysuit.  The boots and gauntlets have a texture like hammered metal, and the cape has a leathery texture to it.  Even the skin around the mouth is textured nicely, and actually looks like skin.  Over all, this figure is much more beautifully sculpted than its less expensive counterparts from companies like Mattel or DC Collectibles.

I do have a couple minor complaints about the sculpt, though.  First, the bat symbol on the chest, while better than the Asylum version, is still too thin and narrow, so it's not very game-accurate.  Second, is the cape.  Specifically that big long goofy looking section flowing out on the left side (the figure's left).  It doesn't match the right side of the cape at all, and gives it an awkward asymmetrical look.  The cape is also too short.  It doesn't hang long enough at all.  I like sculpted flowing capes, but this one falls a little short.  Literally.  The Asylum version definitely had the better cape. 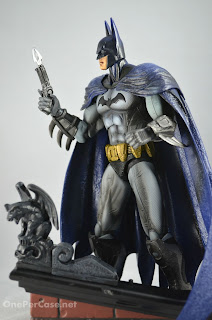 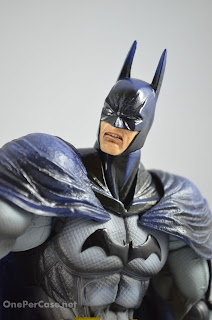 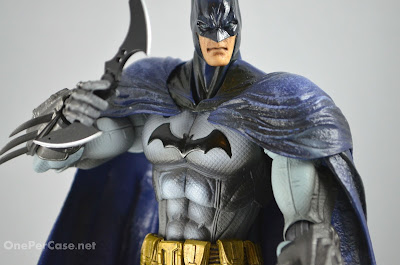 The paint is mostly amazing, although also not entirely game accurate.  The body suit has some great shading that brings out depth and detail.  The boots and gauntlets are a nice gunmetal, and actually look like metal.  But they should be much darker in color to match the game.  Same goes for the gloves, which are way too light in color.  The skin is beautifully shaded as well.  The cape and cowl are a nice sharp blue, again with great shading.  Although, the blue is too bright.  It was much closer to black in the game, at least on the cape.  And I much prefer the black and grey batsuit look compared to the blue and grey.  But that's a matter of preference.  Overall, the paint is almost perfectly applied, albeit not entirely accurate.  Sharp lines, evenly applied with very few noticeable mistakes. 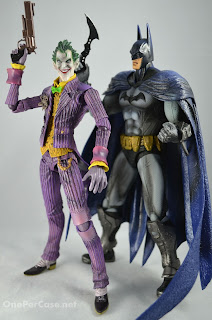 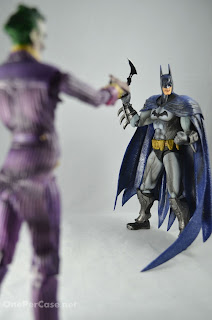 Unfortunately, my sample does have a couple minor mistakes, though.  There are a couple grey paint splotches on the left boot, which are almost unnoticeable on the metallic gunmetal, but are much more noticeable in photos.  And then there's the weirdness with the forearms between the elbow and the top of the gauntlet.  For some reason, this area on both arms has a slight blue-greenish (seafoam?) hue to it, not matching the rest of the grey.  Again, this is more noticeable in the photos than it is in person, so not a huge deal, but still mildly annoying.  And for a figure this expensive, the mistakes should really be non-existent.  Luckily these sort of mistakes are the exception and not the rule with Play Arts figures.  I think I just got unlucky on this go-around. 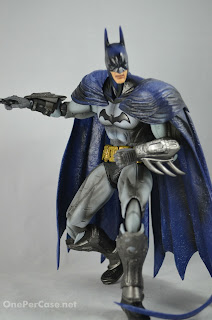 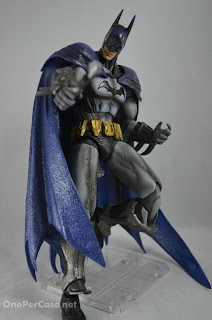 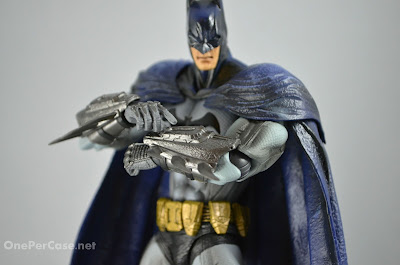 One of the things Play Arts figures are most known for is their articulation.  Batman is no exception.  He features a ball jointed head, neck, upper torso, and waist, double hinged knees, ball-hinge and swivel shoulders and biceps, and ratchet ball-hinges and swivels at the elbows, wrists, hips, and ankles.  And, if that weren't enough, he also has mid-foot swivels.  The one piece of articulation missing, compared to the Asylum version of Batman, if the ball jointed cape!  On that version, Batman's cape is split into two halves down the middle, and each half is on a ball joint, which allows some pretty good poseability.  On this new version, although the cape is still split down the middle, it unfortunately is not attached with any sort of joints, so the poseability is pretty slim.  But despite this minor miss, this figure is still amazingly articulated.  Much more so than any Mattel or DCC versions.

Another area where Square Enix really excels is with the accessories.  Play Arts figures traditionally come with multiple swapable hands and occasionally other parts, plus weapons.  This Batman includes one pair of fists, one pair of gripping hands, a second grimacing head (err, more grimacing head), a batarang, and the batclaw gun, which this time includes a removable claw, with a second claw with a "cable" attached, to simulate its extended state.  The cable is just plastic, not any sort of actual cord, but it achieves the desired effect and looks cool if you can find a practical way to display it.  All of these accessories/parts are sculpted and painted well, with the same quality as the rest of the figure, and make for some great variety in displaying the figure. 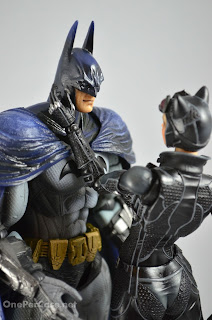 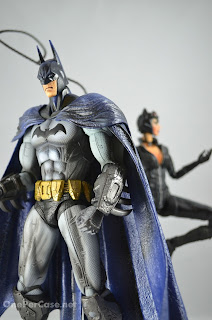 Despite a few setbacks with minor paint errors, a few inaccuracies with the colors and the bat symbol, and a less-than-amazebawlz cape, this is still a really nice figure.  Don't get me wrong, it still kicks ass.  But it's similar enough to the Arkham Asylum version that it's not necessarily a must-have if you already bought the first one.  But if you missed out on that first version, this is a more than acceptable substitute.  It's definitely worth the price tag, and is an awesome representation of Batman.  This figure is showing up through online retailers now, and is currently up for pre-order at BBTS. 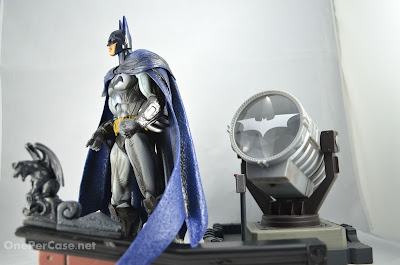 Pictures, words, and all this written in the "I'm Batman" voice in my head, by Zak 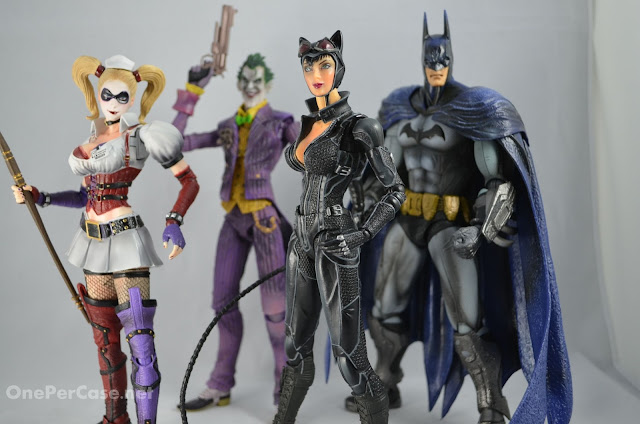