Thanks to Entertainment Earth, tonight we have our first look at the first wave of Hasbro's Marvel Legends Iron Man 3 series.  Full pic and details after the jump.

BBTS was first to break the news of this line a couple weeks ago when they put the pre-order up, but now we have our first look at the first three figures thanks to EE.

"Classic Horned Iron Man" looks to be the same figure from the TRU 2-pack a few years ago, with swapable horned and un-horned heads.  Iron Patriot is the Norman Osbourne comic version, and is, unsurprisingly but disappointingly, a repaint of the Extremis figure.  And then there's Bleeding Edge Iron Man, who is a completely new sculpt and looks pretty good so far.  These figures all include a Build-a-Figure piece to make a massive comic version of Iron Monger, with the yet-to-be-revealed second wave including the final three pieces. 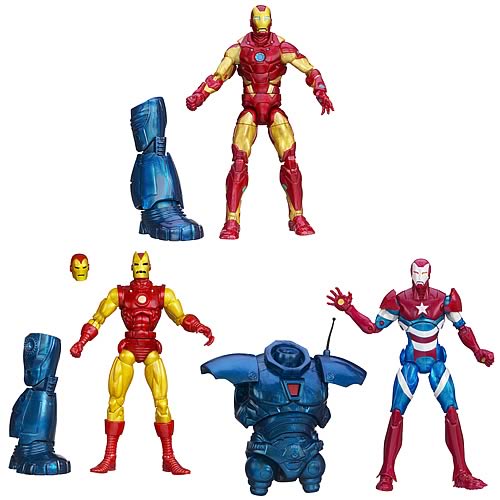