On the surface, 2012 seemed like a banner year for films.  Read on to learn why it wasn't. 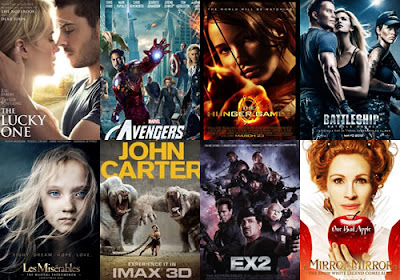 2012 represented one of the best years for films in many years - The Avengers, Ted, Skyfall and others drew crowds to multiple showings with their original and well-written scripts, while creating instant Oscar buzz for Lincoln, Les Miserables and Moonrise Kingdom.  In fact, revenue for 2012 was up 6.4% from 2011 with 1.4 billion people going to the movies, which on the surface would represent a win.  But dig deeper into Hollywood's peak season - first week of May to Labor Day - and those numbers tell you a very different story.   According to figures released from the Huffington Post and Box Office Mojo, we're surprised and disappointed to report that Hollywood actually had a record-low year.  The actual number of tickets sold, a better indicator of foot traffic, was down 4 percent (532 million tickets) during the summer season, which represents the lowest amount since that number was tracked.
Why should anyone care?  Think about how much department stores and toy stores depend on the holiday season for their yearly profits.  If foot traffic at stores like Target and Toys R Us declined 4% during what is supposed to be their peak season, investors and people in general should be worried.  Hollywood's 'season' was its worst since they started keeping track of such numbers in 1993.
The problem started almost soon after the season began, although we didn't know it yet.  The Avengers kicked things off with a bang, eventually making it the highest-grossing movie of the year and the third most successful of all time.  Theater owners were already grinning at a Spring season that was up as much as 20% from 2011.  But Hollywood, like so many other industries, relies on its mid-level Summer products to draw in sustained performance.  While the lines were long for The Avengers, the very bad Battleship ($65M) and the overlooked Total Recall ($56M) played mainly to dark and empty theaters.  More duds than hits followed, including the worst film ever in That's My Boy ($37M), and the good but unpopular Rock of Ages ($38.5M) and The Watch ($35M).  Sure, there are always surprise winners during Hollywood's lottery, with The Hunger Games ($408) and Ted ($216M) making strong and surprising revenue during their runs.  But, those kinds of examples were few and far between in 2012, with good releases like Prometheus ($126M) and Men in Black 3 ($178M) unable to sustain their initially favorable opening weekends.
Why the decline?  Here are some possibilities:
1. Too much hype, not enough quality product: Much like the highly-courted prom date who ends up not putting out, audiences were promised one thing and delivered something very different.  You can only show so many slow-motion, darkly-themed previews before people become desensitized and overly expectant, and that's exactly what happened.
2. A Reboot-Happy Hollywood: Even though it performed well, The Amazing Spider-man ($259M) is a good example of what's wrong inside Hollywood's executive meetings. Sony, ever needing to keep its contract with Marvel fresh or risk giving the franchise back to Marvel, produced yet another reboot for a franchise that didn't need it. Had there been a bigger plan to merge it with The Avengers in a future film, the logic would have been solid. Hollywood not only needs original storytelling, but it must exercise better logic in its managing its assets. A fourth Spider-man, set within the confines of already-established canon, could have worked IF Sony had plans to bring on other heroes. But since it's announced no such plans and it doesn't own any other superhero names of note, Sony executives might be left out in the cold long-term. Finally, 2013's Man of Steel could be the final nail in the coffin for reboots if it doesn't succeed, since fan reaction has been tepid at best. And that's not necessarily a bad thing.
3. How we consume entertainment is changing: With the DVD market churning out titles faster than a cow turns curd, fans simply waited for home releases rather than wait in long hot lines. We all know about the switch to digital downloads, so again it's not surprising to see people staying out of the theaters. When people watch entire seasons of a television show in a only a couple of weekends, it reduces on-air revenue each time we do, unless studios can make that back in the home market, which is generally happening. With theater popcorn and a soda becoming a small fortune, it's no wonder people are choosing to stay at home.
4. Rising ticket prices: There is no reason why an evening ticket should cost as much as $12 and $16 for IMAX. I don't care if they're offering "XD" sound or the failed D-Box experience. Enough said.
Although 2013 promises to have an exciting lineup of films, including Iron Man 3, Oblivion, and the aforementioned Man of Steel, there isn't much to be excited about in terms of establishing more foot traffic.  With no film in 2013 likely to attract moviegoers like it did with The Avengers or TDKR, Hollywood may see another steep decline, something the industry must address with better original writing, less reboots, and lower pricing.
How many films did you see in 2012, and do you have any opinions on the decline?  Comment below!