Our final update from NECA’s outstanding Prometheus line this week features another Toys R Us exclusive 2-pack, the Battle Damaged Engineer Vs. Trilobite. Check out this horrifying set after the jump. 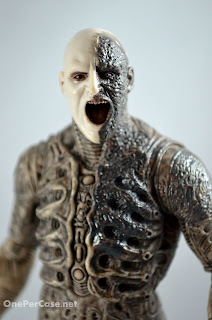 If you haven’t noticed yet, I’m a total NECA fanboy. And a Ridley Scott/Prometheus/H.R. Giger/Alien-verse fanboy. So if you want the short version: This set is awesome, NECA is awesome, give them your money now. 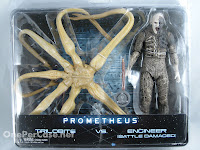 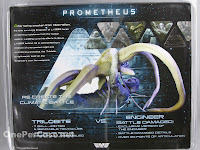 The packaging, like all the other current Toys R Us exclusive 2-packs from NECA, is a heat-sealed clamshell. Artwork, bios, blah blah blah, honestly I barely paid attention to the package in my haste to get to the two awesome looking figures inside. Now that I’m looking at it again in my photos, huh… pretty cool.

The battle-damaged Engineer in this set is a retool of the Pressure Suit Engineer from Series 1. He features a resculpted torso with corrosive battle damage, and a new screaming head, also battle damaged on one side. He’s just as awesome as the Series 1 version and features great detailing in the sculpt, and a simple but spot-on paint job, mostly comprised of a dark paint wash over the off-white plastic to bring out the high level of intricate detail in the sculpt. Articulation is the same, so you can get all sorts of great dynamic, angry poses out of him.

The Trilobite is the main attraction of this set. This was perhaps one of the more… intense parts of the movie, and to anyone that hasn't seen it, the significance of this creature is probably not readily apparent, but it represents a key step in the evolution of a much more iconic creature.

The trilobite is basically a main plastic body with seven long tentacles protruding in all directions. The tentacles are attached via ball joints, and are made from bendy-rubber with flexible metal armatures inside, to allow them to hold poses fairly well. Kind of like a gumby trilobite. He/she/it also features numerous smaller rubber tentacles on the underside of the body, and one rather phallic looking appendage, the tip of which was cleverly concealed in the package behind the silver Toys R Us exclusive sticker.  And I don't think that was by accident. I didn't notice this part of the creature in the movie, but knowing Giger’s artwork and its influence on this film, I’m hardly surprised to see it. 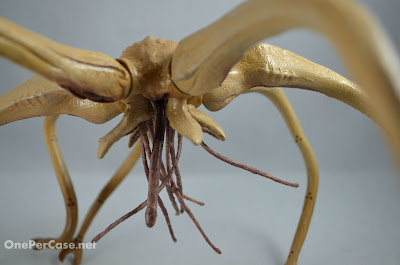 The paint on the Trilobite is fairly simple compared to the Engineer figures in this line, being mostly bone colored, but there is some nice detailing on the under side of the creature, and some very subtle dry brushed shading on the top.

Overall, this set is another great addition to the slowly growing Prometheus line, and has me excited for the next series of figures (which will feature a much more familiar looking creature). This set is available now in Toys R Us stores and on toysrus.com. 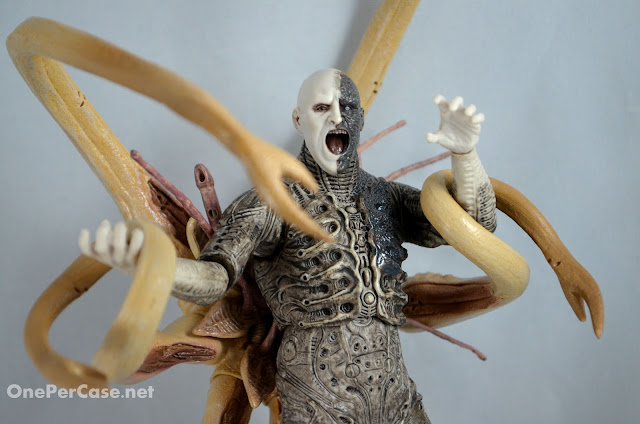 Review, photos, and use of the word phallic by Zak.
Posted by Zak Sousa at 7:00 AM