Finally, new DC Universe figures are here!  Kind of.  Not in retail yet, but available online.  And did *I* really just say that?!  So anyway, how did Barry Allen turn out?  Click past the jump for the fastest action figure review ever on One Per Case! 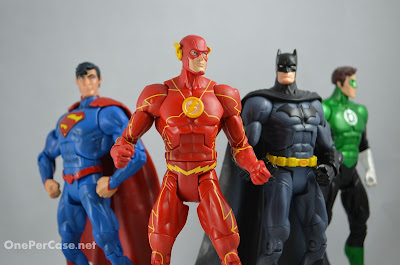 I've got to admit, I've never been a huge fan of the DC Universe as a whole.  Batman has always been awesome, but for many years, I had virtually zero interest in the rest of the Justice League.  But I've actually really liked the New 52, and have been getting sucked into this line a little bit, also due in part to Jason's nefarious influences.  So the DCnU All-Stars Bats and Supes have been patiently waiting on my shelf for more of their team mates to show up.

The packaging for this new DC Unlimited line is a new design, replacing the long-lived DC Universe Classics line design.  I'll probably catch flak for this, but I actually think it looks a lot better than the DCUC packaging.  It's much more dynamic and exciting looking.  The name of the line and the character are both prominently displayed, along with some awesome character-specific art on the bubble insert, and the figure himself is also clearly shown off.  I'm not a carded collector, but packaging designs like this occasionally test my commitment to opening my toys.

The figure is a mix of old and new parts.  Unfortunately, he doesn't get a completely new body with sculpted seams and panel lines like the New 52 Superman and Batman did.  Instead, the "lightning" lines are merely painted on.  The lower legs and head are new sculpts (and the head DOES have sculpted panel lines, although they're not painted), with the torso being retooled to include a sculpted Flash logo (I have to give Mattel credit for actually sculpting instead of painting the logos for these New 52 characters, it looks so much better).  Otherwise, the rest of the parts are the same buck that has been used on many previous DCU figures, including other versions of The Flash.  (Why the hell do I know that?!?  Dammit Jason.)  And because of that, the articulation is also standard for the line.  Ball jointed head, ball hinge and swivel shoulders, single hinges at the ankles, elbows and knees, swivel and hinge hips, swivels at the thigh, wrists and waist, and an ab crunch.

The paint job is pretty decent, though I'm never much of a fan of large amounts of yellow paint over a different color plastic.  Unfortunately, that's the case with the boots here.  There's some minor smudging and flaking on mine.  Otherwise, the lightning lines of the body are all crisp and sharp.  I'm a little surprised that Mattel didn't paint the lightning lines on the head as well.  This could have been a good opportunity for variants... sculpts ALL the panel lines, then release versions with and without them painted in with yellow, since the lines only "light up" when he's running in the comics.

The Flash isn't really a very accessorizable character, but Mattel did more than I expected and gave him attachable lightning/energy bolts.  Unfortunately though, they're not that great.  The two for his arms are pretty flimsy and fall off if you look at them sideways.  The one on his back plugs in, so it functions better, and Mattel actually finally retooled it so it doesn't have Supes' "S" on it anymore, but it looks kind of silly.  Can't complain too much though.  At least he came with something, unlike many other figures in the line. 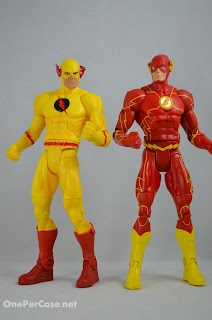 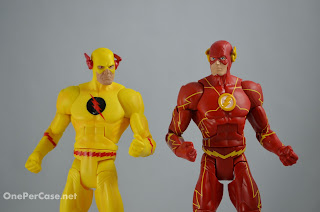 If you're one of the people that doesn't hate the New 52 and is actually looking forward to this line, Flash is a must have.  This line hasn't hit mass market retail yet (should be any day now...), but you can find the figures for varying prices online.  I'm waiting for most of them to hit retail, but my impatience for Flash made me add him to an order I was having shipped from our friends at BBTS. 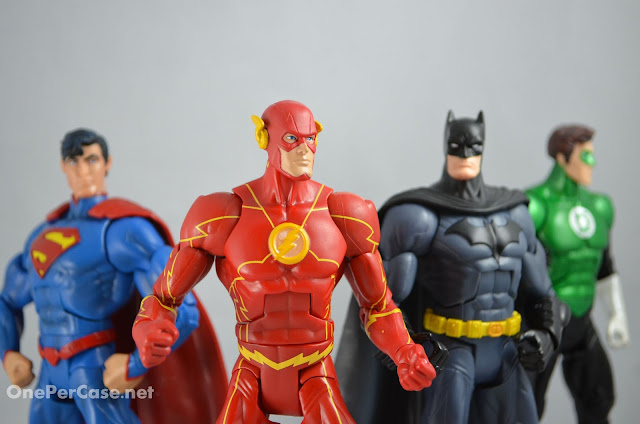