I think we're at the halfway mark now! Today brings us the upper torso portion of the MakeToys Green Giant, the homage to G1 Hook... who I've dubbed in the same naming convention as the rest of the Green Giant parts... GG Hook. GG Hook will make our final part of the main body leading us into the arms and then finally the Giant himself.

Does GG Hook's 'And I'll form the head' position really top off this figure? Take a look after the jump!

GG Hook is our final main body piece for the Green Giant. Like the rest, he comes packed in a beautiful box and plastic insert; packaged in his combined form. Again, we'll get to all  that last.

GG Hook is a faithful representation of his G1 ancestor. Molded in the Constructicon bright green, he also contains some grey pieces and a very prominent black piece. While not having as many neatly applied warning marking paint apps that his brethren have, he does still have quite a few. The mounted crane is functional in the way of being able to extend. Unlike TFCs Dr. Crank though, it does not have an actual function.

My only real dislike with this mode is that Green Giant's head is so pronounced... I mean it's right there! In plain sight! It does not fold up as well as I'd like and it just stands out. 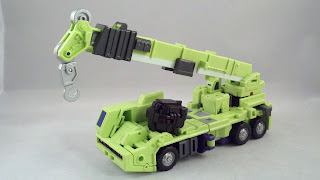 Getting GG Hook to Bot-mode is a fairly normal venture for a Transformer. Front folds out to legs. Back unfolds to arms. Pivot head. Okay... well there's a little more than that... but not much.

Start by disconnecting the crane. It's mounted on some peg to slot connectors and pops right off. 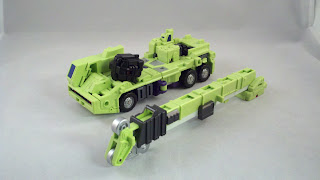 To start the legs, fold the cab out to the side. This allows the front end to be pivoted up. Unfold the legs from the center up and forward and separate them. Stand GG Hook up. 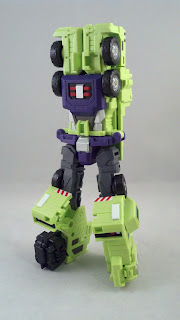 GG Hook's arms take a little more than unfolding. There are a lot of dove-tail like connectors that parts have to be lifted out of before they can be unfolded. Lift the arms out of their slots. The elbow has to be pulled out from the upper arm before it can be flexed. The shoulders are mounted on a grey swivel joint that has a ratchet built into it in the chest. I found that this piece required more than the usual amount of force to move. I was afraid that I'd break it but, I was able to get it moved without and damage. 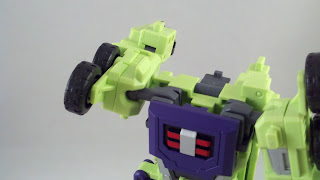 The head is seated into the body of the crane. Flip it up and over and rotate it around.

GG Hook winds up using the second half of the grip of Green Giant's combined blaster. His other major accessory is of course, his crane. 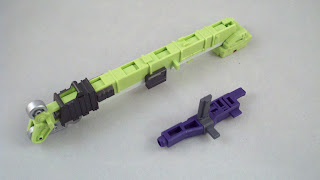 The crane can fit onto GG Hook in 2 different ways. The post holes on the bottom can be fit onto either the horizontal piece behind his left shoulder, or pegged into a port vertically behind his right shoulder. 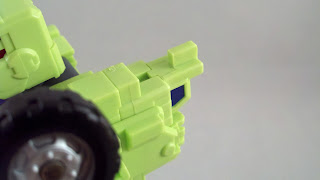 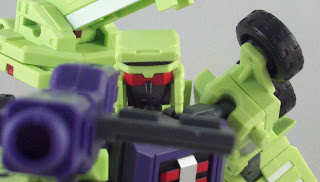 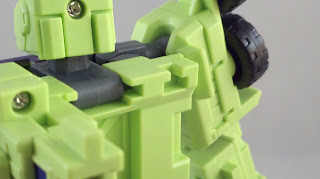 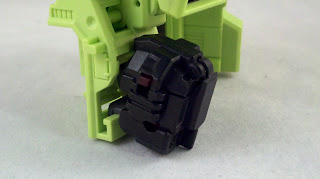 Getting GG Hook into Torso-mode is pretty much the same as his G1 and TFC counterparts. It basically consists of folding him in half. 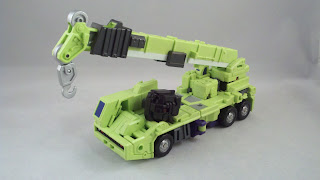 Green Giant's oddly placed head folds up and slides into the middle.

The chest shield connects at 3 different points, and rather well. There are two posts on the back of the shield that will peg into spots on both the front and back end of the Alt-mode... well now both ends face forward... you know what I mean. There is also a vertical post on the back of the chest shield that fits in-between the two vehicle halves. 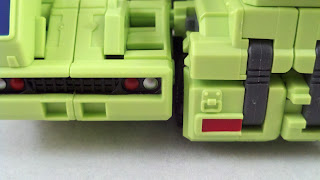 Connecting GG Hook to GG Long Haul is done in a fairly neat way. On the top of GG Long Haul are to sections that have a spring loaded mechanism that will cinch down on the rails underneath GG Hook. Push the levers in to open the space up, line the spots on GG Hook's underside up and release the spring mechanism. The connection is neat and fairly secure. 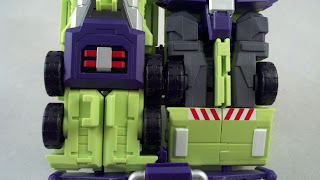 Green Giant is nearly complete... he just needs his arms! 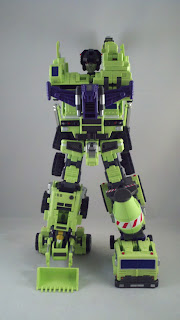 Compared to his brethren, GG Hook is, like GG Mixmaster, on the tall side. Adding, I'm sure, to GG Long Haul and GG Scrapper's Napoleon complexes. 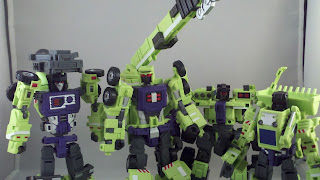 What I'm finding odd is how much of a difference there is in scale between Hercules and Green Giant. There is not a huge variance between the individual Bot or Alt-modes. But the difference become incredibly noticeable in their "Component" modes.

GG Hook is the same size as Dr. Crank and of course towers over G1 Hook. 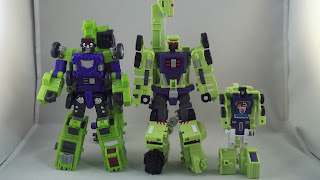 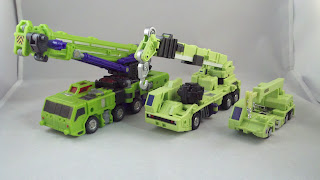 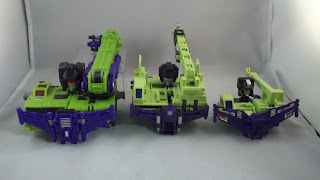 So far so good. We've built the bulk of our Green Giant and have seen how he sizes up next to his TFC Counterpart and G1 predecessor. Stay tuned as we get to his arms, GG Scavenger and GG Bonecrusher, and then finish off our review with a look at the big guy himself.