Moving up our Green Giant, we come to the lower leg and waist section of this brute, the homage to G1 Long Haul... who I'm calling simply, GG Long Haul. Building up on what I feel is already a nice piece of work, GG Long Haul will be what connects our last two pieces, GG Scrapper and GG Mixmaster, to continue our build towards the Green Giant himself.

Does GG Long Haul carry his weight? Take a look after the jump!

GG Long haul comes, like the rest of his brethren, packed in Limb-mode in his own spot in the plastic tray that the set was packed into. I started off by getting him into Alt-mode; he's a pretty chunky little dump truck. Like the others, he's molded in primarily bright green with some bits in Charcoal gray and silver/gray. And once again, the paint apps are clean and sharp.

I've noticed that unlike the G1 Long Haul, both the GG version and TFC's Heavy Labor have very shallow truck beds with bot mode parts being visible.

GG Long Haul transforms in a very similar fashion to TFCs Heavy Labor. The legs are stowed underneath the truck bed, which in itself makes the Bot-mode arms.

Starting in Alt-mode, flip up the top of the truck bed. pop apart the bed and swing what will be the arms out to the sides. The purple panels that make up the bed are flipped in on themselves to form the arms. 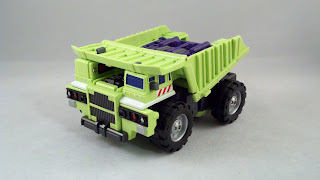 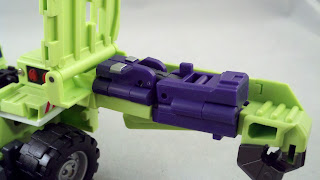 With the arms started, move to the lower frame. These bits will be GG Long haul's legs. Start by pulling the front wheels back towards the rear ones. The legs are unfolded out towards the back of the Alt-mode and the feet flipped out. 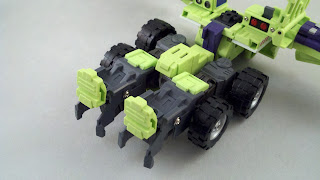 The crotch takes a little more than just one swivel. The large green section gets rotated so its perpendicular to the legs. The small green flaps that form Green Giant's cod piece get folded in and the front end of the Alt-mode gets flipped up and pegged into place.

From here, you can finish the arms. There is a swivel at the shoulder at which you can spin them to face forward. There are 2 bends in the elbow; be sure to rotate the fists. The tops of the shoulders, made up of the pieces of the truck bed that cover the cab, can be positioned straight up or at an angle, your preference. The head is flipped up and rotated to face forward. Two pieces that form the lower part of the Alt-mode's front end get swung inward towards the body. 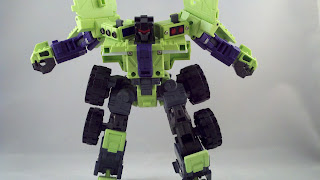 GG Long Haul is squat and feels bulky. I like it. With his almost stubby legs and long arms, he feels like he should be a gorilla. He has plenty of articulation throughout that even with his bulk, doesn't really get hampered. 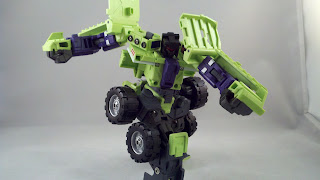 GG Long Haul's main weapon is of course pulled from the combined weapon of Green Giant himself. According to the pics, he gets the same weapon as GG Scrapper, the purple, square barreled laser rifle. With his size, it's more a large pistol. 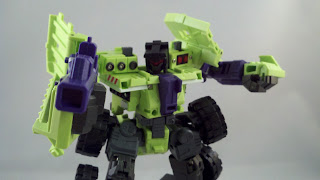 Unlike GG Scrapper or GG Mixmaster, GG Long Haul comes with something a little extra. These appear to be pile drivers or some sort of piston. In Alt-mode, they really can't be stored anywhere. In Bot-mode he can wield them like pistols or they can be stored behind his arms.

The really interesting thing is... they come apart and reveal both a straight slot and Phillip's headed screwdrivers. I'm not sure why a bot this big would need GIANT screwdrivers... but it lends to the construction motif. 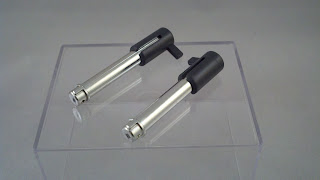 Getting GG Long Haul to Torso-mode was a little more than I though it would be. Both TFCs Heavy Labor and the G1 Long Haul are merely folded into a 90 degree angle with a few other small modifications. GG Long Haul requires a bit more... especially where it involves his legs and truck bed. 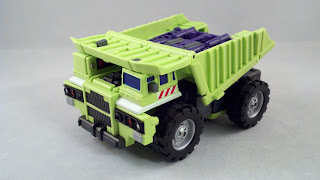 Start by pulling the front wheels back towards the rear ones. On the underside, swing the green section out to be perpendicular to the legs. Pull the waist shield pieces out to the sides and swing them down to cover the upper portions of the thighs. 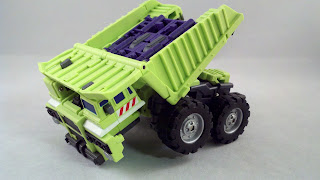 From here, spin the legs 180 degrees. While doing this, the wheel is spun to remain on the outside of the leg. 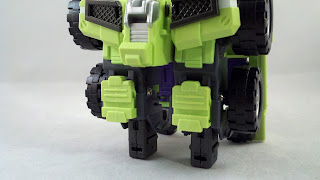 The next part is the truck bed. Flip up the section that covers the cab. The purple plates that make up the bed get folded in on themselves; similar to how they fold up in Bot-mode to make GG Long Haul's arms. The space  that is created will allow the entire bed to be rotated downward. Rotate the hands to face palm up and attach the 'pistons'.

GG Long Haul is ready to take his place in the grand scheme of the Green Giant .

To connect GG Long Haul up to his lower leg compadres, there is a post at the end of each leg. This post fits into the sections at the back of GG Scrapper and GG Mixmaster. In both of the legs, there is actually a spring loaded catch system that helps keep the legs in place. It's a nice little feature that shows off some good engineering on MakeToys part. 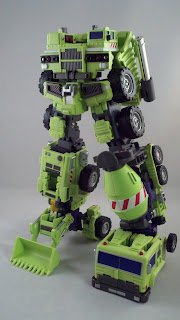 As for what our team looks like so far... we still have the tall lanky GG Mixmaster with both GG Long Haul and GG Scrapper being shorter in stature. What GG Long Hauls lacks in height, he makes up for in width. 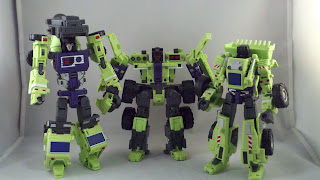 As compared to his TFC cousin and his G1 counterpart, GG Long Haul maintains the scale difference that has been seen in the prior two figures. He's ever so slightly smaller in vehicle mode that Heavy Labor and dwarfs G1 Long Haul. 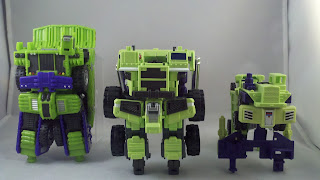 Like the others, I'm happy with this figure. I like the look and feel of GG Long Haul. He's a dump truck and I picture him as a brute; the overall look of his squat frame and long arms lend to that very well. He's got plenty of articulation and some excellent detail. We're 3 bots down and 3 to go before we take a look at the big guy himself. The Green Giant is well under way.