It's Friday! and what better way to spend a Friday than talking Transformers!

Today we're going to take a look at Part 2 of the Transformers Prime - First Edition DVD 2pk. More specifically, a quick look at the DVD and then the Deluxe Optimus Prime mold that came in it. If you went to Dan Diego Comic Con in 2011, this Optimus might look a little familiar and you may already have one.

Is this DVD pack worth a repaint, or would you just leave it? Take a look at some comparisons after the jump!

Megatron is certainly one solid reason to buy this 2pk. 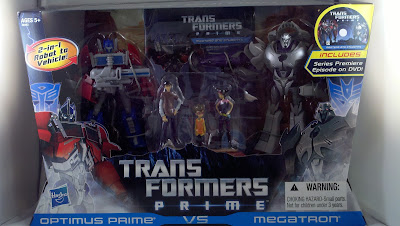 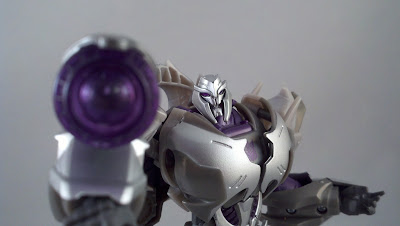 The DVD that comes packed in this set... making it a DVD pack... is unlike the DVDs we've been getting with the recent single carded figures (Kup and Rumble specifically). Instead of the DVD just being in a plastic blister and stuck to the card, this DVD actually comes in a DVD case, labelled and everything.

The episode we receive states that it's the first episode of the series... 'Master and Students'. Which is technically true if you don't count the 5 episode 'Darkness Rising' mini-series that actually kicked off the show. To me, this is Season 1 Episode 6. It's not a bad episode, but I felt that Season 1 took a little to get going and they could have probably picked a better episode.

Now, on to the gooey Energon center of this pack.

Packed to battle Megatron is the First Edition Deluxe mold of Optimus Prime. First Impression... well, second really as I have this mold already...

I like this mold. He's in scale with Deluxe Megatron, even though technically, he should be MUCH bigger compared to the other Deluxe scale figures. He's a nice weight, plenty of joints... ball, hinge, swivel... and has some good paint apps. I'm certainly happy with getting another version of this mold. Optimus is molded in red, blue, and silver/gray with some nice paint apps. 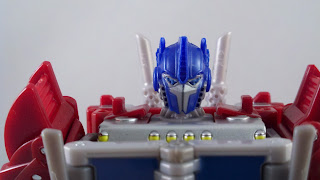 Despite Optimus' head being set up for light-piping... even including the clear blue piece, his eyes are painted over. it kind of defeats the purpose, but at lease the paint apps are done decently.

Optimus comes packed with one accessory, his Ion Blaster. I like this accessory. It's molded in the same silver/grey color as Optimus' other parts. It has a cowling that fits over most of his hand making it look like a part of his arm... which is the norm for the show, built-in weaponry... instead of a hand-held weapon. 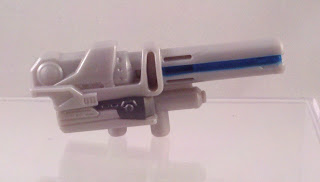 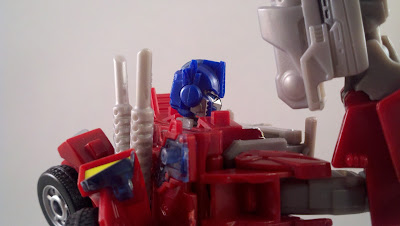 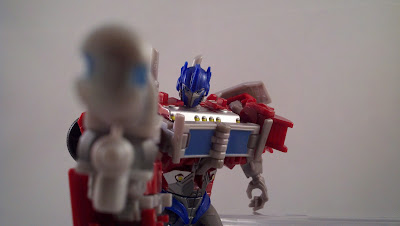 Getting Optimus into Alt-mode is not really that difficult. Most of his transformation is straight up; his arms require a little extra thought. Make sure Optimus is unarmed. Fold Optimus' arms in on themselves from the elbow. The plate that folds out will form the nose of the Alt-mode. Fold that plate back and snap it into place  in the now exposed grey truck grill. Optimus' chest folds in half outward. Fold Optimus' arms inward toward the center and begin to swing the red truck nose plates up so the grill faces out. 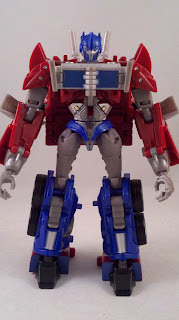 Spin Optimus around... his back swings open from the center out. Create the sides of the Alt-mode, then flip Optimus' head back, it kind of pops into place. Fold out the wheel wells and wheels and spin Optimus a 180 at the waist. 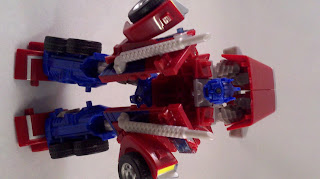 Fold Optimus back at the waist, push the arms all  the way in and snap them into place under the windshield. Fold the sides of the truck up into the nose, snapping the wheel wells into place.

Pull up the panels on the front of Optimus' legs. Fold the back of his feet forward; these pieces become the top of the cab. Fold them at the far end of the grey connector and then into the back of the cab at the hinge attached directly to the leg.

Before snapping the legs together, don't forget to fold out the horseshoe  on the inside of the leg. 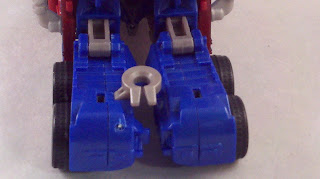 Snap the top of the cab into place. Pop the smoke-stacks out of their slot, slide them back slightly and pop them back into place. 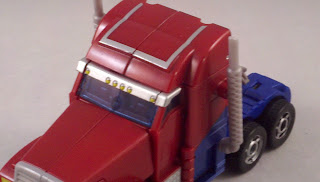 And there you have Optimus in Alt-mode...

The front peg of Optimus' Ion Blaster can fit into the horseshoe on the back. 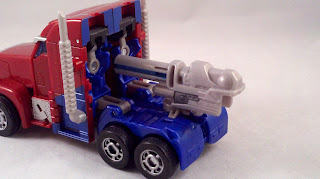 As I mentioned prior... this is not he first version of the mold we received. For the 2011 SDCC, we received  Optimus as the First Edition matrix of Leadership Exclusive.

Optimus came packed, as most of the exclusives do, in a beautiful box. The front panels were decco'd as Optimus' chest and held closed with a magnet adorned with the Autobot shield and the usual Transformers Prime logo and First Edition foil stamp. The back gives us the line from Optimus Prime in the '86 movie in which Optimus states "One day, an Autobot shall rise from our ranks and use the power of the Matrix to light our darkest hour."

Remove the magnet from the front and open the panels...

Optimus comes packed IN packaging the resembles the Matrix. 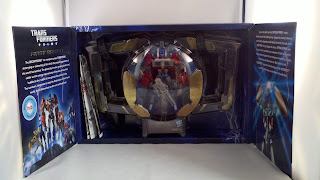 The left hand panel of the box has character art from the show, the Hub's logo, and a brief description of the premise of Transformers: Prime and why the Autobots are on Earth. The right hand panel gives a breif history on Optimus himself and his rise to being the leader of the Autobots and bearer of the Matrix of Leadership.

The Optimus figure comes packed in one of the most clever packages I've seen in some time... a mock up of the Matrix of Leadership. Basically a fancy plastic tray with detailed card inserts that splits in half; allowing you to keep Optimus in or out of the package without damaging the packaging itself. There is a strap with velcro on it that simulates the chain that Galvatron used to keep the matrix close, that allows YOU to wear it. For an exclusive, this was just brilliant. 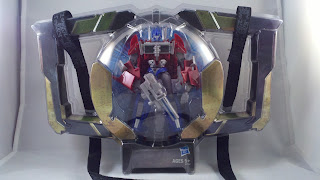 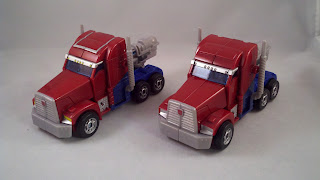 Since Optimus regularly uses 2 Ion Blasters, I thought I'd take advantage of my SDCC mold and give the 2pk version some extra firepower. 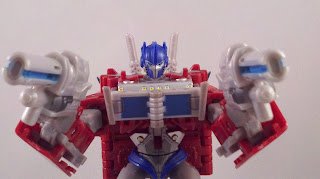 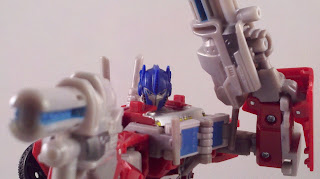 Overall, I'm glad  this mold finally hit retail. I'm sure there were plenty of people out there that were unable to get a hand on the SDCC exclusive... you should still be able to find these 2nd hand, I know where a few could be found. While the exclusive's packaging is top notch, I feel that the 2pk version received a little more love in the decco department making it superior just based on looks. All in all, this is a great Optimus to add to either your Optimus or TF: Prime collection, be sure to check your local Toys R Us for this excellent 2pk.

Pics, review, and stopping Megatron, no matter the cost... by Scion of Primus.