We've spent the last week looking at Hasbro's newly released Transformers Generations 2012 wv.2 Combaticons. Sure, Swindle, Brawl, Onslaught, Blast Off, and Vortex have all been good figures in their own right, but there is one last thing that has to be looked at, their combined form, "Decepticon Bruticus"!

Does Decepticon Bruticus come together nicely? Or does he just fall to pieces on us? Take a look after the jump. 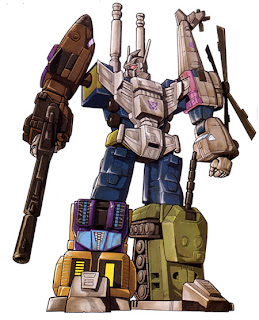 Bruticus is one of the most lethal of all the Transformers. The combined form of the Combaticons, Bruticus is pure power. Capable of punch that can sunder a mountain (14k psi) and possessing immense strength (can lift 500k in tons) Bruticus is more a force of nature than a bot. Bruticus' only real weakness is... well... he's stupider than a bag of doorknobs. Despite being a mesh of all the Combaticon's personalites Bruticus only seems to rely on his own near infinite reserves of brute force. Megatron doesn't seem to care about Bruticus' lack of tact, he'd prefer to have an army of composed of nothing but Bruticus'... Brutici... Bruticuses... thankfully, he doesn't.

Combining all the Combaticons into Bruticus is fairly easy. Onslaught has all the connector posts (male) and then all the other Combaticons have ports (female) that those connectors fit into. The connector ports are all square as compared to the octagonal ports used by the Energon combiner molds. The connectors are very solid and I found they were a little difficult to just pull apart, but if you 'break' them, like you would a pencil, they pop apart a whole lot easier.

In the turnaround pics above, I used the modified limb transformation that I discovered to make the limbs a little shorter by folding in Blast Off's legs and keeping the mid-plate folded in on Vortex. It gives Bruticus better proportions. With the limbs folded all the way out, his arms are just too long.

With Bruticus combined as we're told in the instructions, getting him balanced requires a little manipulation. Swindle seems to be able to be kept straight, Brawl has to be bent a little bit; in turn bending Bruticus' knee. This puts Brawl a half step behind Swindle and gives Bruticus the look of walking or thundering forward. The down side is, with the limbs transformed as I have, there is really no arm articulation at the elbow.

Thanks to one of our regular readers, PaxCybertron, I took an idea for yet another variation of Blast Off's Appendage-mode. This keeps the original transformation of the legs and shortens the upper arm. It does expose Blast Off's head though. If you spin his head to look behind Bruticus, it helps the overall look.

Bruticus does have his own weapon. His 'Sonic Cannon' is a combiner in itself. Using Onslaught's dual cannon as a base, attache Swindle's blaster to the back. Plug the back of Brawl's blaster into the barrel of Swindle's. The underside of Onslaught's blaster has a few post holes; attach Blast off's pistols to these and then fir the grips of Vortex's gun-blades into the pistol barrels.

I think this weapon is goofy. It's a nice idea allowing everything that comes with these figures to be contained in/on Bruticus... but it just looks weird. I tried a few different variations while I was playing around wit the parts, but nothing looked all that great. I feel the fault lies in Onslaught's weapon just being odd.

As I stated earlier, Bruticus' articulation is kind of limited in the arms. They don't do much, even if they're extended out as they're meant to be. The one pose that I could really only get Bruticus to stay in without any kind of support was the walking pose; which I'm good with. I like the idea of Bruticus thundering through battle.

Other than that, I'm good with this set. He'll by no means replace my FansProject upgraded Bruticus... because he's just bad-ass... but he will get his own space up on the shelf. Hopefully, you've liked this past weeks reviews of the Generations Combaticons. Hopefully you can find a set for yourself and I wish you luck.