Review: He-Man – The Most Powerful Game in the Universe

Who doesn’t love a good game based on one of their favorite toy lines? Or wait, is that just another cheap way to advertise MOTUC? If you have an iOS enabled device, you can find out for yourself, with the release of He-Man – The Most Powerful Game in the Universe! Sure, it’s only 99 cents, but is it worth it? Read on to find out! 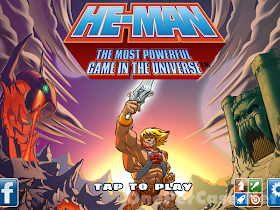 When I heard He-Man was coming to the realm of the iPhone/iPad/iPod touch, I was suitably excited. After completing my download, I remembered, “hey wait a minute, why am I paying for something that is essentially an ad for a toy line?” Oh yea, because I’m a sucker sometimes, and because it was less than a dollar. 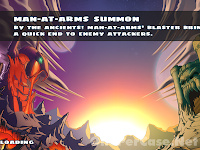 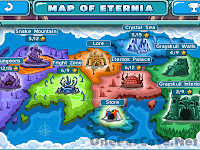 The game features vibrant graphics that incorporate a fairly well executed combination of He-Man both old and new. When you click to start your adventure, you’re taken to a map of Eternia which gives you the option of seven levels (which must be played in order) as well as the Store and the Lore section. While not a huge game, it does offer classic locales including Snake Mountain, the Fright Zone and Castle Grayskull. 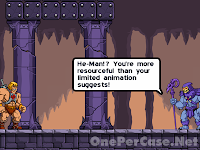 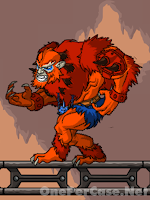 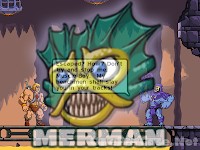 When you head in to a level, you have a nice background screen of Grayskull and Snake Mountin, as well as a little in-game tip. Like many games, the Most Powerful Game in the Universe starts out with a tutorial level. You get some guidance from the Sorceress (one of a small number of in-game guests) to get your started, then you’re on your own. Once you meet Skeletor for the first time, he’ll taunt you a little, and then you get a short sequence featuring a nice homage to the classic Filmation intro. 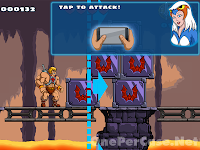 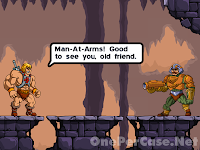 Once you get going, you’ll face a decent variety of baddies from the Masters of the Universe lore. Villains come in all shapes and sizes, and they include Horde Troopers, Snake Men and Skeletor’s Robot Knights. Most levels feature a boss, and the head honchos are the usual suspects, Beast-Man, Mer-Man, Trap Jaw, Hordak, and of course ol’ skull face himself. 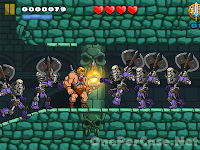 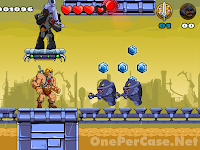 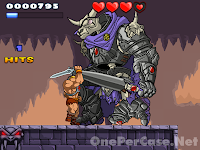 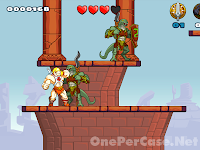 Between levels, you have the option of purchasing some in-game power-ups via the game’s system of power crystal currency. You can purchase additional power crystals with good ol’ US dollars, but they’re quite easy to rack up just by playing the game, so if you have a little patience you’ll be able to get extra health, combo attacks and other power ups without spending any real cash. 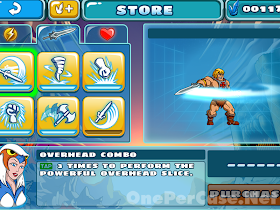 Once you meet up with Orko, dying becomes more fun. Upon losing all your health, you’ll get to take your chances with Orko’s Game of Chance, where you have an opportunity to win prizes like power crystals and a chance to restart from where you left off. Simple, yes, but better than just dying. If you manage to complete the level, you'll be given a rating from one to three stars. 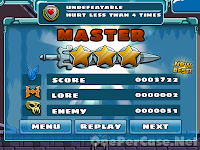 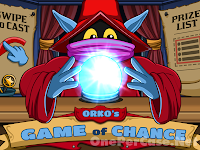 Throughout the levels, there are hidden symbols (usually somewhat difficult to get to) that unlock items in the Lore area of the map. Once again, not spectacular, but a fun inclusion. Unlockables include character bios, product art (from the original cardbacks), mini comic covers and two types of concept art.  The product art and comic covers are particularly fun for fans of the vintage line. My only complaint is that I wish they would have included more. 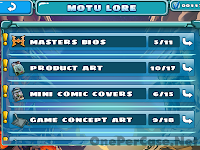 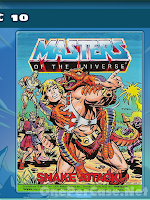 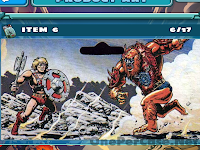 In the end, there’s a lot to like about this game. The action itself is fairly standard for an iOS side scroller, but adapted well for the world of Eternia. Classic bad guys, good Masters style humor, and just enough power-ups and bonuses to keep you playing for a while. One glaring omission is the lack of Battle-Cat, or if he’s there, I haven’t found him yet. Overall though, anyone with any interest in Masters of the Universe won’t find it hard to get their dollar’s worth, so get ready to tap a button and hold that sword up high.  He-Man: the Most Powerful Game in the Universe is currently available from the iTunes store, and is coming soon for Android devices. 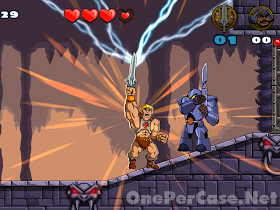