Kneel before the power of Doom! Today we look at this year’s Marvel Digital Comics Unlimited subscription mail-away figure, Victor von Doom with the Infinity Gauntlet. Is he worth the $60 price tag for a year’s worth of unlimited online comic reading? Click through to the dimension beyond that “read more” link to find out.

If you’re a fan of Marvel Comics, chances are you’re aware of their push toward online content the past few years. Ever since the Marvel Universe line started in 2009, Hasbro has partnered with Marvel each year to offer a mail-away figure only available with the purchase of a yearly unlimited subscription to Marvel’s online library, which typically costs about $60, plus about $6 for shipping and handling on the figure. You mail in a form with your subscription confirmation code, and a few weeks later, you get your figure in the mail. Not a bad deal, as long as you make use of the subscription. Sometimes, if you catch Marvel at a convention (SDCC, NYCC, Wonder-Con) you can get an even better deal on the subscription and get your figure on the spot, without having to wait for it to be mailed. 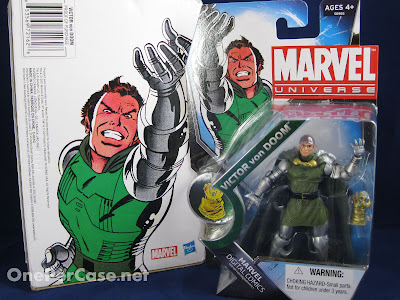 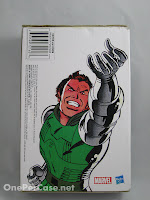 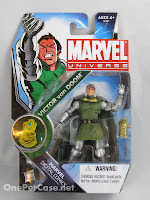 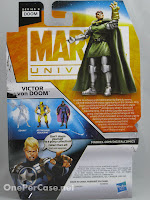 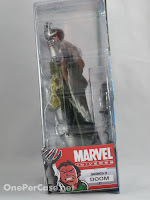 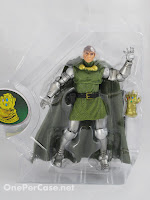 Victor von Doom comes in a white mailer box, like most Hasbro mail-away figures, featuring comic book artwork of the character on one side. This same art, mirrored, is used for the figure’s card back. The card design matches the rest of the Marvel Universe line, but of note, this figure is part of Series 3, which is the 2011 line.  This makes sense, since it's the third mail away figure, and technically became available last year.  Instead of a comic shot, or last year's customary SHIELD emblem in the bubble, we get a cardboard disc with a drawing of the Infinity Gauntlet. The figure looks great on the card, and despite being a strong proponent of tearing your figures open, I admit, I gave pause before freeing Doom from his plastic stasis chamber. But in the end, Doom’s influence was too great, and I sprung him free. 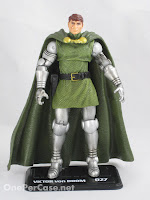 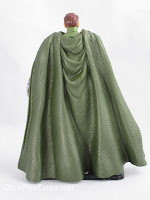 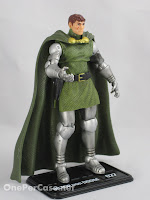 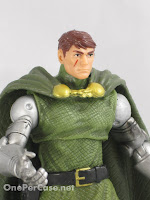 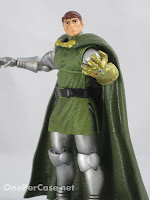 The figure itself uses no new tooling. The body is the same as the Dr. Doom released in the 2011 line, with a repainted Commander Rogers head and a repainted, more metallic version of the clip-on Infinity Gauntlet that came in the Adam Warlock/Thanos Comic Pack. Despite the Steve Rogers head not matching the character art on the package, I’m actually not as disappointed in this re-use of an existing head as I originally thought I’d be. The different paint job makes him look enough like Doom that I don’t just think “hey, it’s Steve Rogers in a Doctor Doom disguise” every time I look at the figure. And let’s face it, we should all just be glad that at least Hasbro didn't re-use the Phoenix head for the 47th time on this figure. 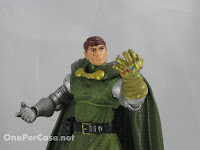 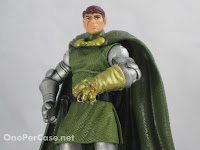 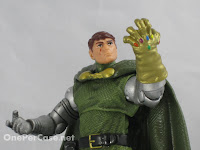 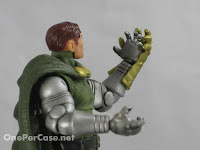 This is the fourth release of Dr. Doom in the Marvel Universe line, and they all use this same body, but I’m ok with that. The sculpt is pretty sharp, especially in the “cloth” parts, with lots of detail and texture. The armor is a great representation of Doom’s classic enduring design throughout the years.  Unfortunately, the sculpt of the Gauntlet doesn't mesh well with the sculpt of Doom's hand.  The Gauntlet has sculpted fingers with the palm meant to clip over a closed fist.  Since Doom's hand is open, he winds up with two sets of clutching fingers.  It looks fine if you position it just right from the front, but from any other angle, it just looks goofy.  I appreciate the inclusion of the Gauntlet, but I'd rather have seen Hasbro retool the hand to be closed, or better yet, pull a Thanos and tool up a whole swapable forearm for Doom. 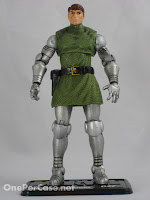 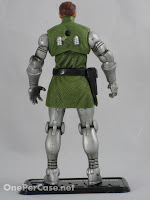 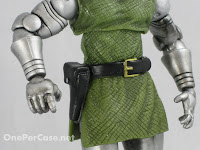 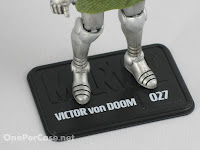 The articulation is about what you would expect from a Marvel Universe figure that was originally released early in the line. He doesn’t feature the thigh swivels or rocker ankles of the more recent figures, but everything else is there. His poseability and range of motion is pretty good.  My only gripe with this figure's articulation is that it's difficult to get his arms posed in a neutral fashion at his sides. 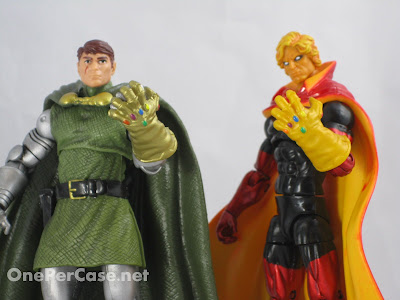 The paint job is pretty much the same as the single carded main-line release last year, being a more muted green than the comic pack release. I prefer this over the brighter colors, so no complaints from me there. The Infinity Gauntlet is painted well, using metallic gold and different colors for each of the gems. Hasbro definitely didn't skimp there.  This one looks nicer than Adam Warlock's Gauntlet.  And thanks to the nice texturing of the cape and tunic, we have a nice dark wash there to bring out the detail. 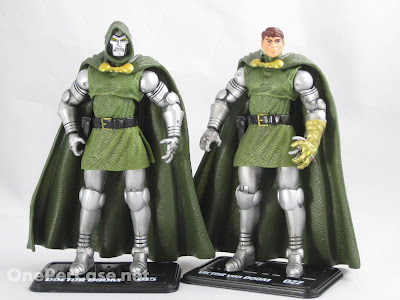 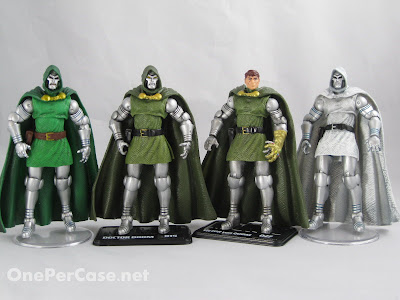 Over all, this is a pretty decent figure. I appreciate that, unlike last year’s X-Force Archangel, Hasbro chose a figure that isn’t unique, or central to any particular team or story, and isn’t SO desired that people actually get upset that they have to shell out $60+ bucks to get him. Rather than being a figure that you feel like you HAVE to get, this is a figure that you feel like you can easily pass on if you don’t find the deal attractive (X-Force Archangel, not so much). After all, he is what every great exclusive figure should be, basically a variant of an already released, widely-available figure. Let’s face it, nobody is going to be sorely missing this guy from their massive battle dioramas or displays. But at the same time, to someone like me who will actually use the subscription, it’s a nice bonus and a great addition to the collection. Like I’ve said before, I’ve always been a sucker for “secret identity” figures. 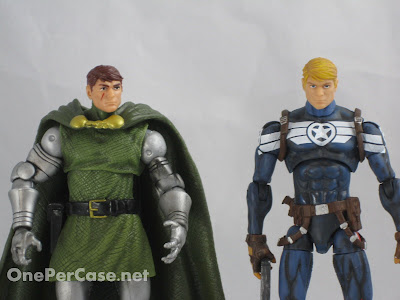 Despite what less educated fans and sellers may claim, this figure was NOT a convention exclusive.  This figure was available for about the past year through Marvel’s site, to anyone in the US. At the time of this writing, the offer has ended, but there is always eBay. 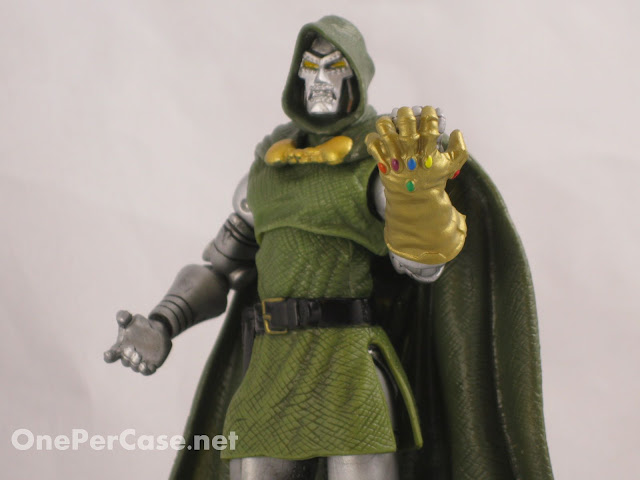 Photos, review, and dark sorcery by Zak.
Posted by Zak Sousa at 11:35 PM