Flashback... 1986... Transformers... THE Movie. Hasbro has taken one of my favorite cartoons and made a feature film. OMG. Within minutes, we get introduced to new characters and watch old characters get snuffed out in an instant. Watching Ironhide go is rough...  and don't get me started on the death of Optimus Prime.

But, let's focus on the new... one of the new characters we get introduced to has become one of the most loathed. Wheelie. The rhyming orphan of the TF universe. With the sudden appearance of Takara's Asia Exclusives state-side, we get a new Wheelie based on the Transformers: Reveal the Shield Special Ops Jazz mold. Can Wheelie's rhyme stand the test of time? Follow the jump...

No... I won't do this entire review in rhyme. I think I'd shoot myself in the face if I had to do that. It would be clever, but no.

Wheelie comes to us in the standard Transformers: Generations red card packaging. Like all the Asia exclusives, the card comes in a bilingual format, English and Chinese. If your not used to seeing Chinese characters on a card, this will stand out on the pegs. 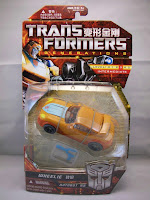 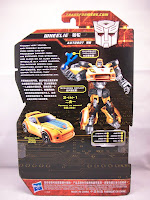 The back is adorned with a shot of Wheelie in both modes pointing out his accessories and, as always, gives us a Bio and his Tech-Spec readout. Wheelie is a capable warrior. His awkward, rhyming speech pattern is attributed to a possible processor malfunction... kind of like Grimlock... but not as cool. 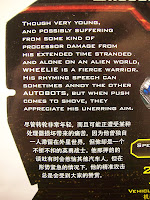 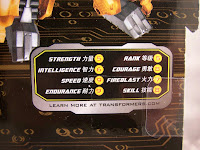 Rip open the card... standard plastic tray with paper ties and instructions underneath. 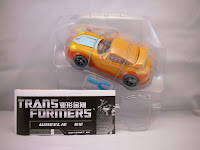 Like Swerve and the rest, I'm not going to go into detail about Wheelie's toy, if you have Spec.Ops. Jazz... or United Stepper... or Shattered Glass Longarm/Shockwave... or Shattered Glass Treadshot... or Timelines Kick-Over... you've seen it, held it, transformed it, played with it, and more than likely said 'Pew! Pew!, Pew!' a few times. I'm not one to judge, so have I. 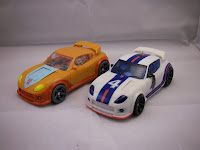 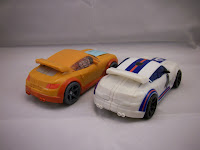 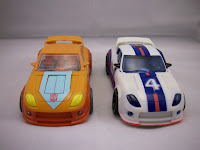 The big thing is, we get Wheelie's colors. I like to think of it as creamcicle orange. I'm not a huge fan of orange, but it's Wheelie sooo... kinda has to be. The color scheme really holds true to G1 Wheelie... orange, darker orange, some grey/blue, and more grey. 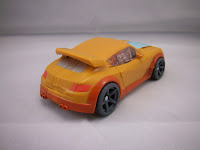 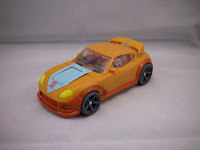 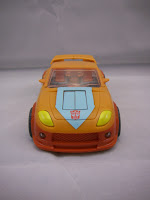 Wheelie comes packed with his trademark slingshot. It's a little oddly shaped with a third post which allows it to be held like a normal blaster. But come on, it's Wheelie, it's a slingshot. 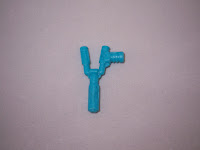 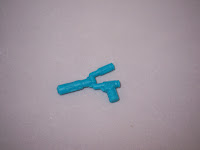 Slingshot or Blaster, you decide.

Since Wheelie is based on the Spec.Ops. Jazz he also comes with Jazz's speakers. 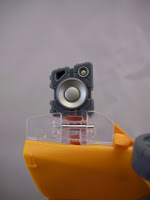 They're clipped in place just where Jazz's are. I don't see Wheelie as needing them... although... Wheelie did breakdance. maybe he brought his own beats? Transformers 2 Electric Boogaloo?


Besides the coloring, Wheelie comes with a very accurate G1 head sculpt. The head is primarily orange with grey. It's so reminiscent of G1 Wheelie, it even has the little brim! One thing I have noticed about these repaints is that they have no light-piping in their heads. The piece that Hasbro would normally use for that is painted over by Takara and the eyes are painted individually. 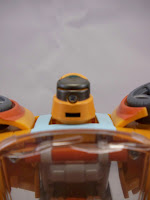 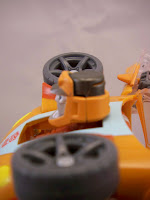 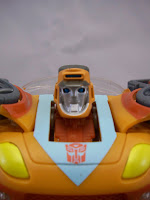 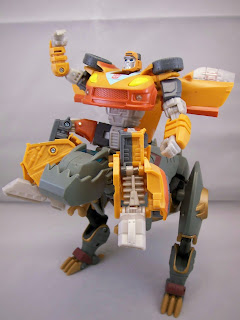 Me Grimlock say you have one too many Energon goodies!

While taking pics for my reviews, I opened Springer. My camera died after the 6th pic so I had to let it sit. Springer still needs to get his pics all taken. But, while freeing him from his plastic prison, I wondered if using one of the plastic ties holding his tail fin closed would work for Wheelie's slingshot... I think it worked fine. I'm thinking of taking it one step further... either cut it and tie the ends, or drill holes and knot it in place. I really don't want to drill holes and ruin the accessory. perhaps cast it and do it that way? 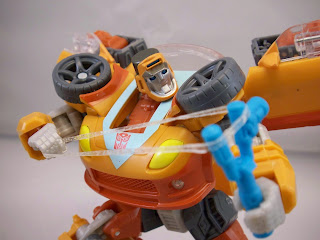 All in all, Wheelie is a good figure. I don't loathe the character, I'm just really impartial to him... take him or leave him. But I'm a sucker for exclusives and limited figures, Jason finding this set for me was awesome.

Why should you buy Wheelie? Do you like the character? Again, I won't judge you. Do you like the Jazz mold that you've already bought for the umpteenth time? Are you like me and have to have updated versions of G1 character? Whatever your reason, go to Toys R Us, and hunt for your Asia Exclusives and get your Wheelie. 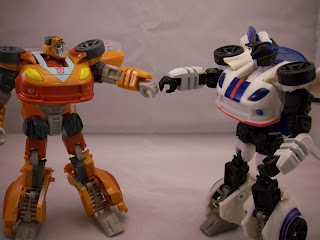