They have been found and purchased! Thanks to Jason, I am the proud owner of the Transformers Generations Wv.2 Combaticons! I have yet to see these bad boys in the wild, but Jason was able to score these at a local Toys R Us, and so far, these are the only ones that have been found in our area to my knowledge.

One of the first G1 Combiner teams, these 5 bad to the endo-skeletal frame Decepticons were a special team that specialized in hard core tactical warfare. And when the going got tough the Combaticons got tougher, they merged to form the Decepticon powerhouse, Bruticus.

Today we're going to take a look at our first of five, the wheeling and dealing, Swindle. Take a look after the jump! 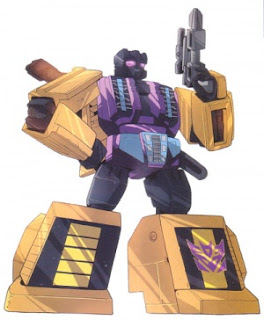 As his name suggests, Swindle is a merchant. And a good one! He scours the battlefields for scrap and weapons and sells them to whomever is willing to pay his prices. While a Decepticon, he doesn't necessarily believe in the Decepticon cause, he just wants to make money. Price gouging is not his only talent however, Swindle is a master with just about any weapon he can find.

Swindle comes to us in what has become the norm for the newer Transformers Generations waves. The card is primarily red with some really nice character art on the front. Swindle comes packed in Bot-mode so the bubble insert gives us a shot of Swindle's Alt-mode. The insert points out that this is Fall of Cybertron Swindle and there is a huge sticker noting that you can "BUILD GIANT ROBOT!" Thanks for the Engrish lesson Hasbro.

The back of the card gives us a few things. We get shots of Swindle in both Bot and "Cybertronian Assault Transport" mode, a short Bio, a Tech-Spec, and a shot showing where Swindle is located when combined with the other Combaticons to form "Decepticon Bruticus".

Open the package, Swindle is paper tied into the tray with his instructions packed underneath.

Jason called these the Fruit-Stripe Combaticons. One look at Swindle and you can see why. He is yellow... garishly yellow... molded in garish yellow. The only other colors that grace him are parts molded in black, purple decco on top of the yellow, and some silver on the back of his legs. There is not a whole lot of paint detail on Swindle.

As for weight, Swindle is LIGHT. he doesn't have any real feeling of heft. He feels thin. And looking at him from angles other than the front... it's apparent.

I noticed Swindle's arms seemed a little low when I took him out of the tray. With the moving of the supports at his back, I was able to bring his shoulders up some making him look a lot better.

From the front, Swindle has some bulk. From the back there doesn't seem to be a whole lot more to him, a black frame with some hollow yellow hunks. There is a lot of empty space in Swindle.

Swindle's only accessory is his pistol molded in black. Swindle has quite a few hinge and ball joints. Some of his leg bulk prevents some action poses. His hands are also molded as part of the forearms, so there is no wrist articulation.

Getting Swindle to Alt-mode is fairly simple...

Rotate the vehicle 'fenders' forward, push his arms down and snap his legs together...

Swindle's forearms have tabs on them, these tabs will snap into the slots on Swindle's hips. His elbows will have to go back to angle the forearms up towards the legs...

Swinlde's torso plate will become the front of the Alt-mode, simply rotate it back towards the top of his lower legs, snap it into place, and then fold his feet down. There is a post hole in the center of the Alt-mode for his pistol to peg into...

It's a solid Alt-mode with very little Bot-mode kibble. The only noticeable parts are his hands on the side.

Now here's and interesting find... Swindle isn't stuck as Bruticus' leg! There are not one, but two hands, a right and a left, folded into Swindle's legs! Swindle could form one of Bruticus' arms if you wanted. I'm guessing that this gimmick will be used when the Combaticons get repainted for the release of these molds as the Autobot team, the Wreckers and their combined form, Ruination.

How could I not review this new version of Swindle without comparing him to my FansProject upgraded Bruticus Maximus? I just had to compare Swindle to Swindle. While in leg mode, both are equivalent in size. But, in Alt and Bot modes the size difference between the two is pretty large. FP Swindle could be a Scout class figure, being much smaller, which leads me to believe that Generations Bruticus may tower over my FP upgraded Bruticus.

All in all, I'm glad I was able to get this version of Swindle. While a little on the lighter side, he's still a nice figure and I have no buyer's remorse for picking him up.

I purchased the SDCC 2012 Exclusive but have no plans of opening him. The same is going to be said about the Amazon G2 colored Exclusive so it's nice to have a set that I can open and have on display. 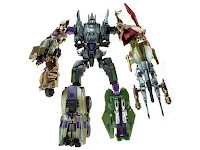 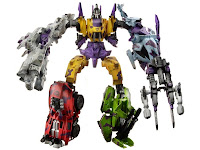 Next to Menasor, Bruticus was my favorite of the original Combiners and I'm happy to get an updated version. In the coming days we'll definitely be taking a look at the rest of the Combaticons from the Generations line as well as Bruticus himself. Stay tuned!