The Punisher is a long-time Marvel fan favorite. Back in the original Toy Biz Marvel Legends line, he popped up in Series 4. Well, Mr. Castle, it appears that you’ve moved up in the world. Marvel Legends Series 3 gives us a brand new Punisher (he is the Punisher, right?). Is the latest incarnation of everyone’s favorite vigilante worth your hard earned cash? Read the review, sucka! 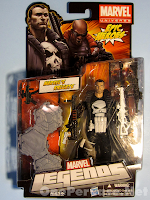 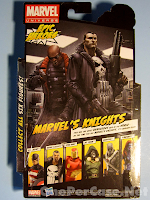 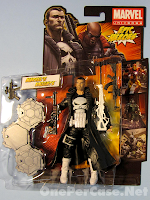 Two things pop out on the packaging, one too much, the other a glaring omission. The first thing, why is Blade all over my Punisher package? The second… wait, it doesn’t even say Punisher anywhere, what gives? Well, the “obvious” answer is that there is a variant, and it is indeed Blade. The “real” answer? Move on to Hasbro "variant" rant. 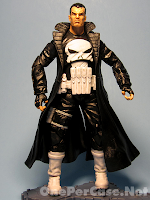 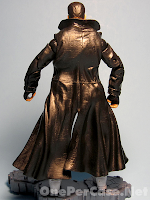 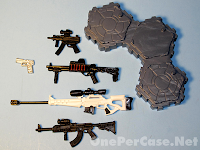 Wow, what a cheap route to go, Hasbro. Frankly, I don’t buy Blade/Punisher as “variant” versions. Some cases have Blade, some have the Punisher? Do you not think that these guys will be hot enough on their own? The same case has a double pack of Deadpool (ok, I guess, with his own variant) and two Iron Mans (Iron Men? Really, do we need two of him?). They pull the same crap with Mystique and Danielle Moonstar in this wave. A different figure is NOT a variant. Sorry, it just isn’t. Don’t double up on some figures and then leave others out altogether. Just not cool. 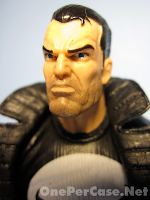 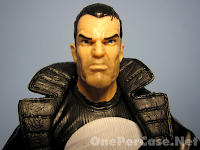 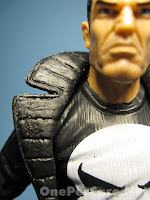 Moving on. I’m digging the sculpt on the Punisher, especially in his outfit. The head sculpt isn’t bad. He’s got a good sneer, looks more or less like Frank Castle, and the stubble-paint turned out well. The outfit, on the other hand, I’m fairly impressed with. Nice detailing on the coat, particularly in the collar. The iconic skull on his shirt blends right into the “teeth” on the belt, which looks great. Good boots, great cuffs and gloves, and one of the best “hidden” holsters I’ve seen in a while. The jacket is firm, but flexible enough to move out of the way to make Frank reach for his pistol. Most impressive. Bottom line is there’s a lot to like about the sculpt. 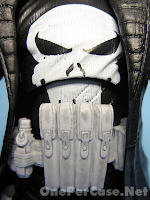 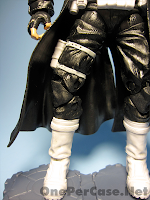 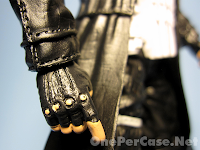 That brings me to the articulation. Punisher has all the standard head, arm, leg and other movement we see across the Marvel Legends line. Again, he can reach for a holster that’s tucked under a jacket in a natural way. To me, that screams “job well done”.  He’s got a lot of guns, and even better, he’s got the movement to wield them. Once again, for a guy with a plastic coat, he can still move, and that’s a plus. 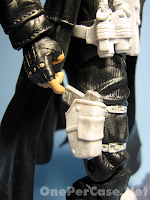 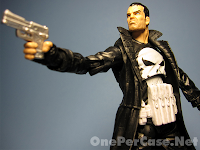 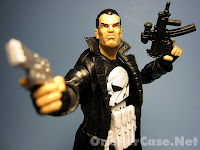 Guns, guns, guns! Come on, Sal! Let’s face it, what self-respecting toy company would put out a Punisher figure without giving him a small arsenal. This is a guy that had a comic line titled “The Punisher Armory” after all. Mr. Castle comes complete with a stand, a pistol, SMG, an automatic rifle, a sniper rifle and some other menacing looking weapon that I’m assuming might be some sort of automatic shotgun. 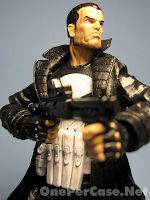 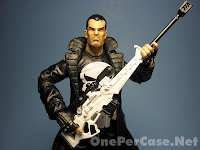 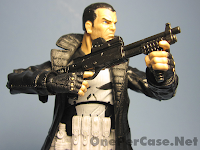 With so many guns to choose from, I’m not going to complain that he can’t hold them all. He can hold one two-handed or a couple one-handed, and keep that pistol safely tucked away for later. With the exception of one, he holds them all nicely. Unfortunately, the best I could get him to do with the sniper rifle was play some air guitar with it. Over all though, well done on the weaponry. 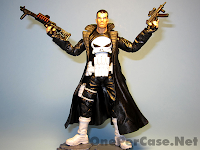 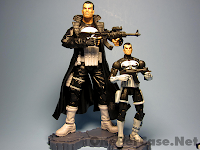 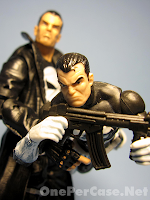 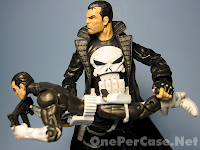 Not sure yet whether the Punisher or Blade is the harder of the Marvel Knight “variants” to track down, but I’d recommend grabbing this guy if you see him. He’s a popular character with somewhat limited availability, so chances are good he’ll end being hard to track down. While he has a few flaws, this is overall a quality figure that you will want in your Marvel collection. 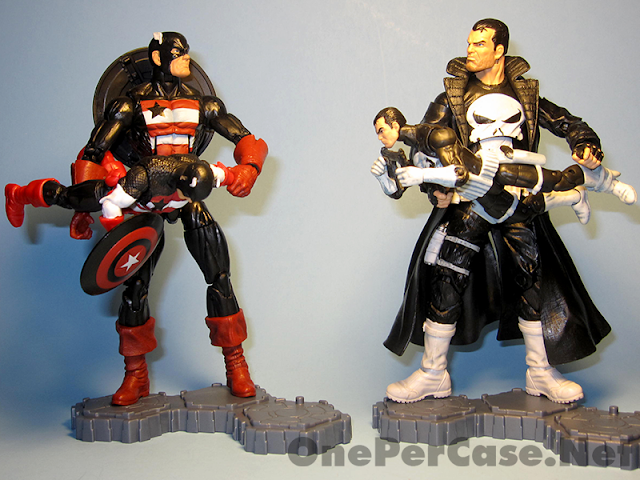