The turtles figures I've been waiting for. Some classic cartoon inspired figures from Playmates. Not only do these blow the other figures Playmates has put out for the turtles out of the water, they make them seem like old Star Wars figures.

More after the jump.

First off, let me give credit to Jason for taking these pictures for me. My camera crapped out and so I haven't been able to get good pictures. Now onto the main event. 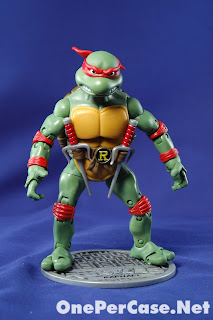 Standing at just a little over 6" tall, Raphael and the rest of the guys are spitting images of the classic cartoon they're based off of. Well, minus a little bit of the goofiness from the animation style.

Like I said, the classics turtles are practically identical to their cartoon counterparts. Each turtle has his signature color pads and wrist bands. In case the colors weren't a dead give away, their detachable belts have their initial stamped on them. At least on the turtles I have, they eyes also look pretty good, none of them lazy eyed or anything like that.

My one and only gripe about the sculpt is the lack of texture. The Nickelodeon cartoon line has plenty of texture, even though the animated versions don't have any. Thankfully, that gripe is barely note worthy and I got over it before I even realized it. 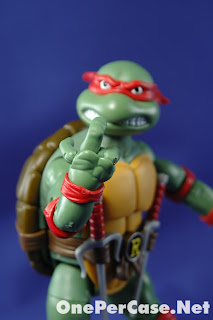 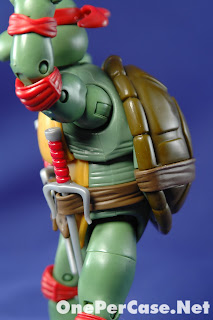 The big thing about these figures, the thing that blew me away, is just how much articulation they have. According to Raphael's plastic prison, there are 34 points of articulation. Rocker joints at ankles, elbows, knees, shoulders, fingers, toes and wrists. Swivel joints in two places at the shoulders, one in the socket, one where the shoulder meets the bicep, wrists, ankles, and thighs. Lastly ball joints at the head, in the middle of the waist and where the legs hook into the torso. 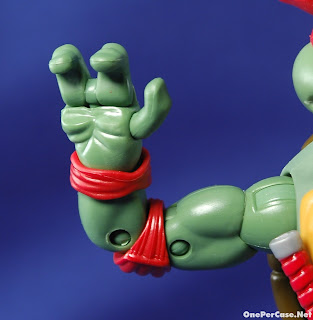 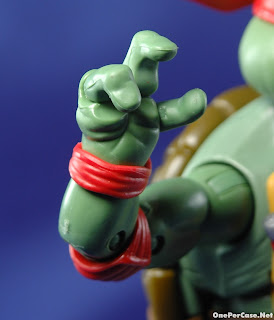 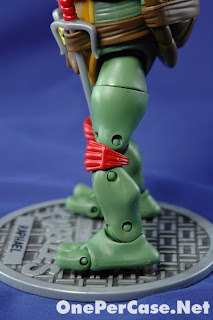 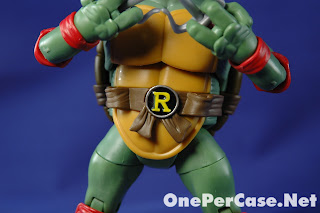 All these joints make for an awesomely posable figure. 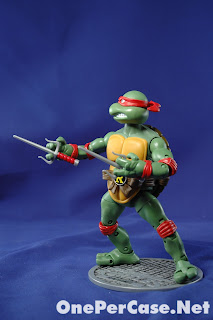 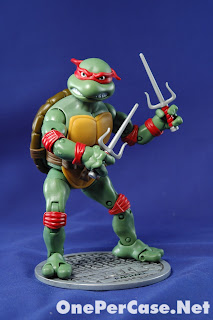 Yay accessories! The accessories that come with the classic turtles are much simpler and nicer. None of those extra weapons that seem out of place. Raphael comes with his sais. They're also painted instead of the monochromatic weapons the other Playmates figures come with, which is pretty cool. 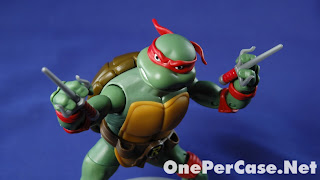 Each turtle also comes with a personalized manhole cover stand. 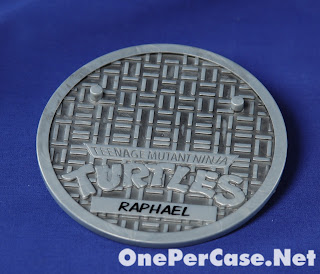 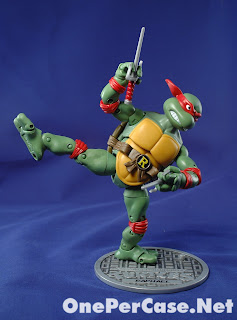 In all, these figures are vastly superior to the Nickelodeon cartoon based line in pretty much every way. If you've been on the fence about getting some of the new turtle figures, go with these guys. I haven't seen them in the major retailers, so it looks like comic book and specialty stores only. 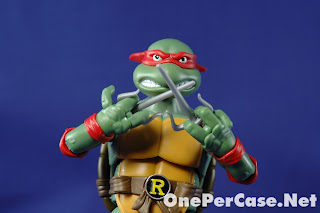 Posted by ElfangorTheAndalite at 10:48 AM