As if having his own dedicated movie line with comic-based figures wasn’t enough, Hasbro has also seen fit to give us a total of four unique Spider-Mans (Spider-Men?) in the two waves of Marvel Universe currently shipping.  And two comic packs. For Wave 18, that means our first ever Spider-Man from the Ultimate Universe, as well as his successor, a Miles Morales Ultimate Spidey variant. 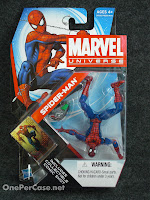 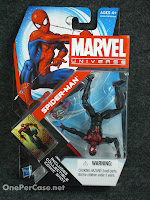 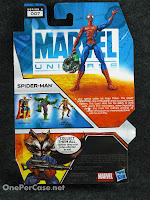 The packaging for this figure features artwork that isn’t very Ultimate-y-ish. It looks more like an amateur drawing of regular ol’ Red and Blue 616 Spidey. I don’t keep my figures MOC, but that’s kind of a shame. It would have been cool to see some good Ultimate artwork on this card.  The "collectible comic shot" however does feature some pretty badass artwork of the character. 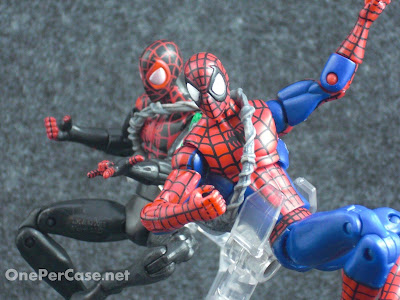 If you’re not aware, there are a few key differences between the Peter Parker of the mainstream 616 universe and the “Ultimate” 1610 universe. You can read up on all the history of both the Peter Parker and Miles Morales flavors of Ultimate Spidey on your own time, but for the sake of this review, Ultimate Parker is a high school student. A teenager. Not the now-adult Parker of 616. His costume is basically the same as in 616, but he is depicted as being smaller in stature, very lean, and with a slightly over-sized head with larger, almost McFarlane-esque eyes on the mask. A while back, Ultimate Pete died. And another kid, named Miles Morales took over as the Spider-Man of the Ultimate ‘verse, with similar but different powers obtained in a similar but different manner than Pete's, and a similar but different costume. 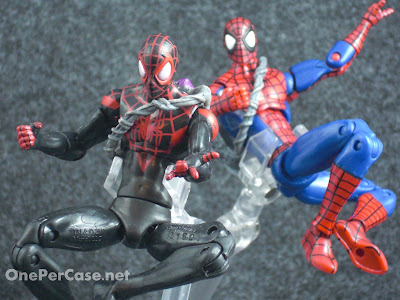 Pretty good idea for a variant if you ask me, especially since the two characters have such a similar silhouette with just costume design difference in the comics. 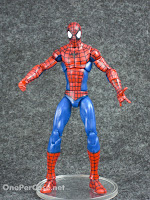 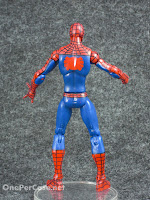 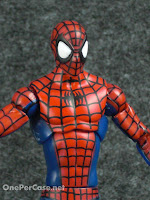 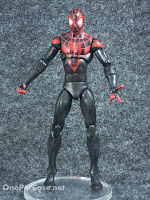 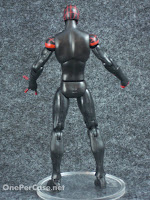 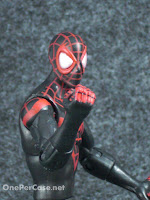 The figure uses the body from Bucky, from all the way back in the second wave of the 2010 line, with a new head, lower arms and lower legs. The body is an appropriately sized choice for these characters, since Bucky himself was a kid. Good job here, Hasbro. Effective and appropriate re-use of a body we haven’t seen recycled to death already. In fact, I believe this is only the second time this body has been recycled (the first being Patriot from Wave 17). And I’d also like to point out that instead of taking the cheap way out and reusing one of the previous (and inaccurate for this version of the character) head sculpts, Hasbro gave us a brand new sculpt. And I dig it. The big bug eyes rock. 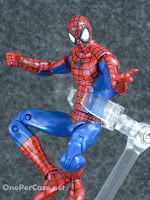 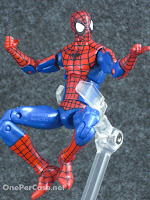 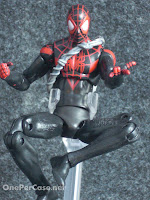 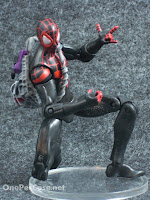 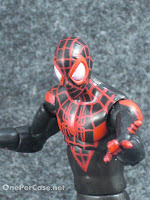 Unfortunately, the articulation from this two year old buck isn’t quite up to 2012 standards. It features all the standard articulation you’d expect from the first couple years of the Marvel Universe line, with lots of ball hinges and swivels, but it lacks some of the newer innovations, like a neck hinge, thigh swivels and rocker ankles. He does have a ball jointed head, torso and hips, ball hinged shoulders and ankles, double hinged knees, single hinged elbows, and swivels at the bicep, forearm, and waist, which all make him pretty dang poseable, but at this point, after so many Spider-Mens in this line, I’d really like to see a true ULTIMATE version, with some ULTIMATE articulation. The recent Ultra-Poseable movie Spider-Man was perfect when it came to articulation. I’d like to see this same articulation design applied to a new comic version. But that complaint aside, the poseability here really isn’t bad. And hey, they gave him a thwippy hand! Which is something I often complain about lacking. So thumbs up here, Hasbro. 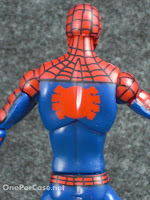 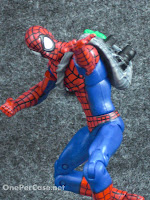 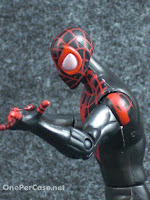 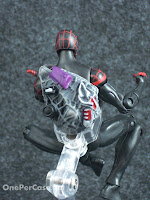 The paint job on this figure, and his variant, is nothing spectacular, but it’s applied pretty decently. All of the samples I’ve seen in person of both the red & blue and the black & red versions were free of major mistakes (but do have a few minor ones). And I do like that the variation in these figures is a completely different paint job. That’s fitting, considering that they are two different characters, but it also shows that some actual thought went into this figure. Despite it’s relatively simple paint job, I can appreciate that. 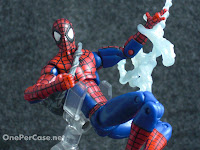 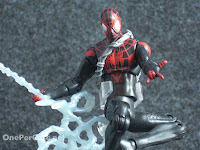 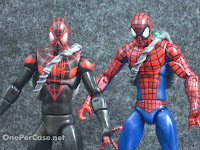 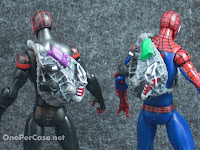 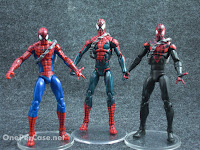 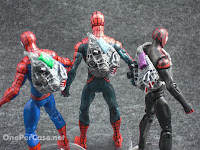 Hasbro does get another thumbs up for resisting the temptation to include the same old tired, over-used web accessory with this figure. Instead, we get the web back pack originally included with the House of M Spider-Man (also from early 2010). That’s another piece of tooling we haven’t seen re-used much (I think just once, in the Walmart box set from last holiday season). Still, this figure feels a little bare without some sort of web accessory, especially since he actually has a thwippy hand. This would’ve been another great opportunity to re-use the suction cup webbing from the 2010 Movie Spidey SDCC exclusive figure. So naturally, I had to use the same old tired, over-used web accessory for a few of these photos.  Also, and I know better than to realistically expect this from Hasbro, it would have been awesome to see swappable unmasked heads included with these figures (both Parker and Miles). 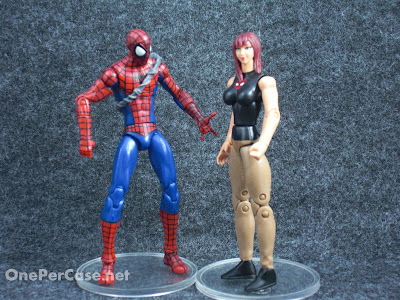 When I first saw this figure announced at SDCC 2011, I have to admit, I was less than enthused. After all, there have been no shortage of Spider-Man figure in the Marvel Universe AND dedicated Spider-Man lines in recent years. But this Ultimate Spidey is actually different enough that he’s worth tracking down. And that goes for both the Miles and Peter variants. Even the Peter Parker version is enough of an improvement over previous versions to warrant picking up. Maybe I’m biased because I like the aesthetic of the Ultimate costume better, but this figure just seems more “Spider-Man-y” to me than most other recent efforts. This figure is available now from fine online purveyors of little plastic men, such as BBTS, and is also now showing up at mass market retail. The unofficial pattern seems to indicate that online retailers are shipping the Miles Morales version, while the Pete Parker version is showing up at brick and mortar retail stores. If you’re a Spider-Fan, both deserve a spot in your collection. 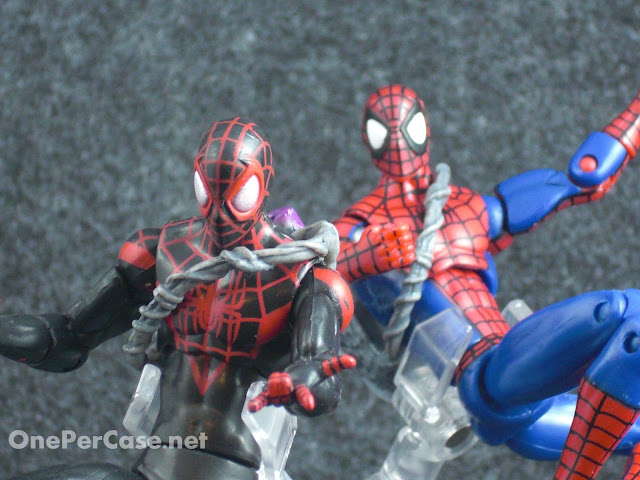